<img src="https://www.qromag.com/wp-content/uploads/2009/06/aurevoirsimonemay29sm.jpg" alt=" " />The lovely ladies of Au Revoir Simone headed out into America on the back of great hometown show.<br />... 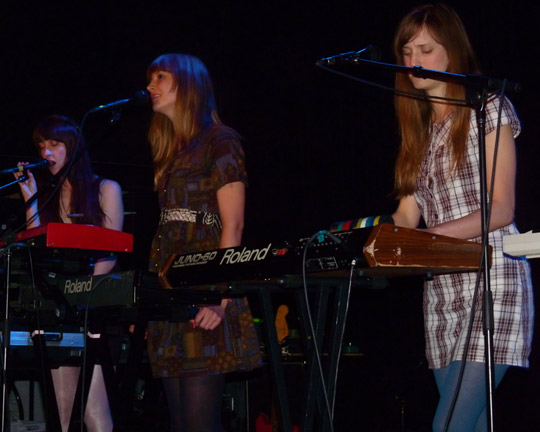 Click here for photos of Au Revoir Simone right before their European tour at Union Pool in Brooklyn, NY on April 13th, 2009 in the QRO Concert Photo Gallery

Fresh off a tour of Europe, the not French Au Revoir Simone returned home, to Brooklyn, at the start of their American road trip.  The three girls, Heather D’Angelo, Erika Foster, and Annie Hart, were positively giddy as they played their borough’s Music Hall in Williamsburg (QRO venue review) on Friday, May 29th.  It all made for a charming and enjoyable set.

The three singer/keyboardists are touring on the back of the just-released Still Night, Still Light (QRO review), which sees the trio build their sound even further from 2007’s The Bird of Music (QRO review).  Their set at Music Hall started very strong with Still Night’s “All Or Nothing”, “Another Likely Story”, and “Anywhere You Looked”, plus Bird standout “Sad Song”.  In fact, Au Revoir Simone started perhaps too strong, hitting up many of their best pieces right at top of the line-up, leading to somewhat thinner pickings later on.  But the four songs certainly fit well together, all up-tempo (even “Sad Song”), moving well into and out of each other.

Au Revoir Simone playing “Another Likely Story” live at Music Hall in Williamsburg in Brooklyn, NY on May 29th, 2009:

Unfortunately, that shifting became a problem with Still Night’s “Shadows”.  With it being the first – and so far, only – song the band has written & performed with guitar, albeit bass guitar from Erika Foster, segueing into and out of the piece is a bit tough.  Going in, Hart joked, “We’ve had like eight thousand interviews over the years where we were asked, ‘Will you ever have guitar in the band?…’  And the answer is, ‘Yes!’” (Hart also joked that some of those interviewers were right there in the crowd, which was at least true for one – QRO interview with Annie Hart).  Afterwards, Hart even admitted that they needed to “make it less awkward when we do that song.”

Au Revoir Simone playing “Shadows”, with Foster on bass guitar, live at Music Hall in Williamsburg in Brooklyn, NY on May 29th, 2009:

Click here for QRO’s live review of Au Revoir Simone at TT the Bear’s in Cambridge, MA on August 13th, 2007

What’s more, the band followed up “Shadows” with maybe the two weakest songs of the night, “Stay Golden” and “Through the Backyards”.  Both from their 2005 debut, Verses of Comfort, Assurance & Salvation, Au Revoir Simone have really grown since then, and while it’s nice that they try to include early material in their set, it isn’t necessary.  Thankfully, everything picked up with the return to Still Night in “Take Me As I Am” & “Trace a Line”, with the band encouraging – and receiving – a sing-along to “Take Me”.

Au Revoir Simone playing “Take Me As I Am” live at Music Hall in Williamsburg in Brooklyn, NY on May 29th, 2009:

But the back end of the show still couldn’t quite match the front end, as songs like Bird’s “Lark” and Still Night’s “Tell Me” felt a little too sad and flat.  However, after the encore break, the trio again brought things back with a pair of songs, this time from Bird of Music, but with another clap-along on “The Lucky One”, and a great finish in the catchy “Dark Halls”.

See also them playing “Knight of Wands”, right before the encore break 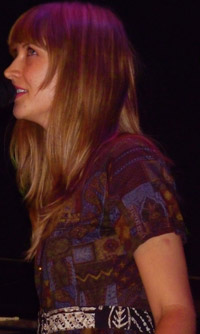 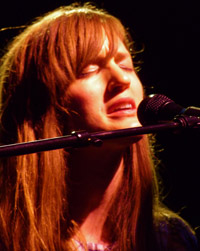 Being three cute girls who all (wo)man keyboards, have a French name (though it was taken from a line in Pee-Wee’s Big Adventure…), and have even been featured in a New York Times fashion spread – all can engender certain assumptions, like that the crowd will be filled with Euro-trash, young girls, and lesbians.  And while such fans were all in attendance – hyper German guys hitting on a lesbian with a Japanese ukiyo-e drawing on her upper arm, and it was easy to see over the relatively 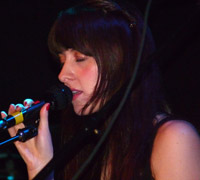 short-standing people up front – the audience was actually fairly diverse.  And their girly-girl nature, from fashion (D’Angelo, in particular, seems to have adopted a better wardrobe after their recent time in Europe) to how Hart runs in high heels, is not off-putting, but infectious – almost as infectious as their cheerful nature.  One can only hope that they can keep it up throughout the upcoming tour, which ends right back in New York at Music Hall’s sister venue, Bowery Ballroom (QRO venue review), on Saturday, June 27th (QRO concert listing).