<img src="https://www.qromag.com/wp-content/uploads/2007/08/aurevoirsimonelive01.jpg" alt=" " />The three soft-spoken songstresses kicked off their first headlining tour with ease at TT the Bear's in Cambridge, Mass. ...

The three soft-spoken songstresses kicked off their first headlining tour with ease at TT the Bear’s in Cambridge, Mass. On Monday, August 13th, Annie, Erika and Heather began yet a new phase of their careers with an intimate and well-received performance.  Even battling the difficult sound at TT’s, the trio sounded as alluring as ever, showing signs of impressive things to come.

The ladies played their strongest tracks from both of their albums, Verses of Comfort, Assurance and Salvation and their follow-up, The Bird of Music.  The second song into the set, Annie announced tongue-in-cheek that it was indeed their first tour as headliners, and to celebrate, they’d play “Sad Song”, which actually raised everyone’s spirits.  “Through the Backyards” was light and airy like a lullaby, while “Dark Halls” bounced effortlessly.

They were talkative, too, which made for a fun atmopshere.  Annie was especially – like when she explained playing a live French TV show and somehow injured her ankle getting off set.  Charming, to say the least.  The entire show was just that:  charming with no pretention while backed up by two albums worth of solid material that translates live extremely well. 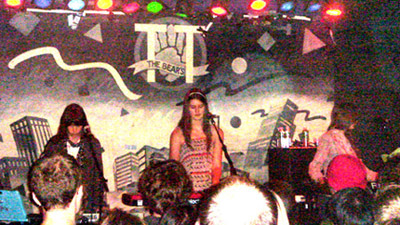 Austin’s Oh No! Oh My! supported Au Revoir Simone with a snappy eight-song-or-so set kicked off by “Oh Be One”, the lead track off of their recent Between The Devil And The Sea EP (QRO Review).