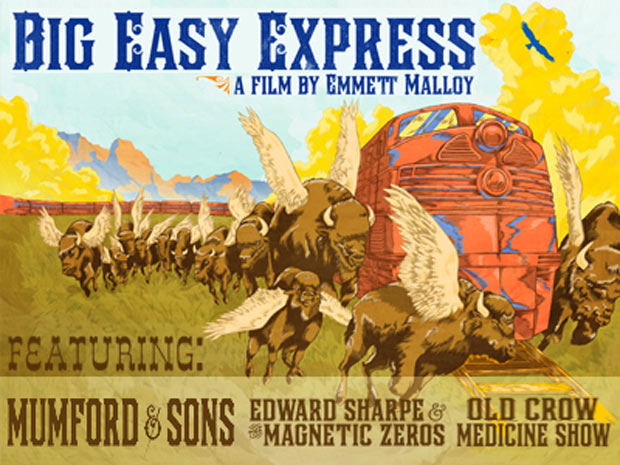 In April 2011, Mumford & Sons, Edward Sharpe & The Magnetic Zeros, and Old Crow Medicine Show teamed up for an unusual throwback of a tour: by train.  Inspired by the Festival Expressof The Grateful Dead, The Band, Janis Joplin, Buddy Guy, and more who travelled across Canada forty years prior, the three modern acts hitched up some vintage railcars for the Railroad Revival Tour from Oakland to New Orleans, playing six one-of-a-kind outdoor show spaces along the way.  Filmmaker Emmett Malloy (White Stripes: Under Great White Northern Lights, “Holiday” by Vampire Weekend) joined them on the journey and made tour documentary Big Easy Express, which was just recently nominated for a Grammy (Best Long Form Music Video).  And Malloy came to SoHo’s Morrison Hotel Gallery Loft on Friday, December 14th for a screening, which was accompanied by performances from The Zeros’ Christian Letts and Morrison’s Peter Blachley.

It was a particularly opportune time for a screening of Big Easy Express, as not only had it picked up the Grammy nod the week prior, but also it is now out on DVD for the holiday season (QRO What To Shop For 2012).  That also meant that the screening could be from the DVD, in an intimate, non-cinema setting like the Morrison Hotel Gallery Loft (QRO venue review).  The Gallery Loft was actually showcasing photographs that Malloy had taken from the tour, along with original art made by Jenice Heo, a collaborator of Neil Young’s, who is a clear inspiration and godfather to the bands that played the Big Easy Express – the artwork on display was not only a tribute to Young, but also picked out by him (Heo also worked with Young on the artwork for his last box set, 2010’s Archives Volume One 1963-1973, which earned both artists Grammy Awards themselves – somehow that was the first Grammy that Neil Young had ever won…).  Blachley mentioned that the photos were on sale – and so, he said, was Malloy’s toddler son Henry, who was also there & very much making his presence known (Emmett Malloy countered that Henry had been sold, with which Blachley followed up by asking if he got a percentage of the sale…)…

Big Easy Express itself is a wonderfully shot tour documentary, capturing not just all six performances, but life aboard the train and the country that it cut through (no word on whether the southwestern railroad route went through the Gasden Purchase, the bit of southern Arizona and New Mexico bought from Mexico in 1854 to enable just such a southern rail route, from California to New Orleans).  Admittedly, the documentary lacks internal conflict, as the three alt-folk collective acts got along so exceedingly well from start to finish (it did become a little tiresome to hear how great everyone got along, even if it was all completely true).  The closest Big Easy comes to any real drama is when a fan tries to jump on the train in Texas, bringing out local police to temporarily halt the Express (and remark – in Southern sheriff drawl – that the train looked like it was “full of hippies…”).  But there are amusing moments (such as Zeros singer Alex Ebert waking up a very drowsy Mumford singer Marcus Mumford, in his sleeping car), or Old Crow commenting that no one in any of the bands had showered in a long time.  More importantly, the visuals couldn’t help but be amazing – and the music couldn’t help but be great.

After the screening, Morrison Hotel Gallery Loft founder Peter Blachley performed a few songs from his upcoming record, Nevada Sky.  In his introduction before the screening, Malloy had joked that the “real reason” this all was happening was because Blachley, a long-time music photographer & executive who only recently moved into making music as well, wanted to perform.  He and guitarist/multi-instrumentalist David Mansfield managed to even relate Blachley’s own Americana to the evening, as the songs had connections to train trips, such as riding the California Zephyr, or the origination of Blachley’s great lyric, “If you tell me where we’re going, I’ll tell you where we’ve been” – it was originally spoken by his wife when sitting in seats facing each other on a train; out the window, one person could see where the train was going, the other where it had been.

Christian Letts kept Mansfield on the stage, and later brought Blachley up as well, for his own acoustic set.  Letts is a bit of the ‘unsung hero’ of Edward Sharpe & The Magnetic Zeros, as he’s the lead guitarist, but it is singer Ebert who gets all the attention on stage as ‘Edward Sharpe’, from his long hair to frequent jumps into the crowd (something captured well on Big Easy Express).  But his acoustic performance at Morrison Hotel Gallery Loft got full respect – and quiet, plus an encore (could have used more lighting, though, as some of the many photographers in the crowd remarked – he seemed mostly lit by the Christmas tree behind him…).

On Grammy night, Big Easy Express will be up against work by Sade, Tegan & Sara (QRO spotlight on), Esperanza Spalding (who was a major upset in the ‘Best New Artist’ category a few years ago, not only as the first jazz artist to win it, but also for beating out Justin Bieber…), and U2 (who’ve got more Grammys than any other band).  The fate of the Railroad Revival Tour is even more uncertain, as an attempt for a second year this year with the likes of Willie Nelson, Band of Horses, and John C. Reilly was cancelled.  But it was wonderful to catch such a great snapshot of such a great tour.