Bob Mould brought the twenty-fifth anniversary of his seminal 'Workbook' to two nights at City Winery.... 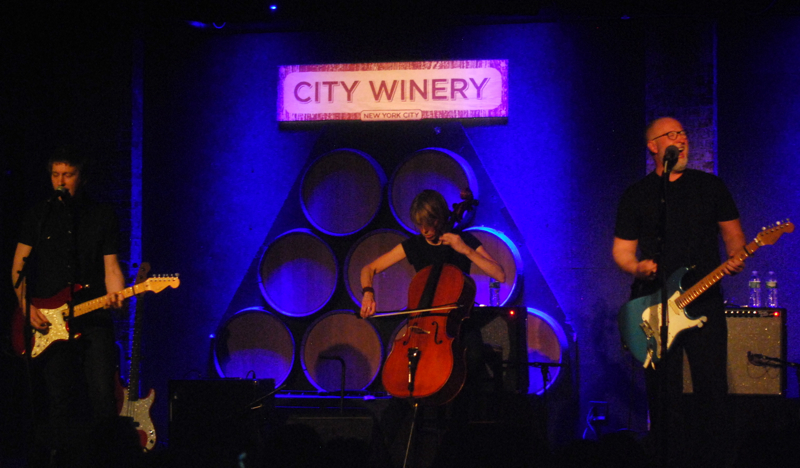 Bob Mould is a man with a long and storied career, first in iconic eighties punk act Hüsker Dü (QRO spotlight on), then solo, then fronting his own successful nineties alt-rock trio Sugar, and then back to solo (but with a band behind him).  He even chronicled it all in his own autobiography, See a Little Light (QRO review).  Two years ago Mould made his first move into reviving older material, in this day & age of revivals, by playing the twentieth anniversary of Sugar’s seminal Copper Blue (QRO live review), as well as releasing a deluxe edition of the record (QRO review).  Now it’s twenty-five years since his first post-Hüsker release, Workbook, and in addition to its own deluxe edition (QRO review), Mould is playing the album live, as he came to New York’s City Winery for two nights, Friday & Saturday, March 7th & 8th.

Workbook was a solo acoustic record, and to play its anniversary in New York Mould picked a very appropriate venue, City Winery (QRO venue review).  A restaurant as well as winery and concert venue, City Winery is much more suited for your singer-songwriter performances, with an audience seated around tables, enjoying dinner and, yes, wine.  However, Mould was still playing electric, and with a ‘backing band’ of his regular bassist Jason Narducy (also of Split Single), as well as cellist Alison Chesley (Helen Money) – unfortunately no regular drummer Jon Wurster (also of Superchunk), but this wasn’t an album or a show that need a drummer.

Going electric changed the nature of the Workbook songs, making for an experience that wasn’t just like putting the CD on your stereo.  Opening instrumental “Sunspots” might have lost some of the acoustic intricacies, but other pieces such as singles “See a Little Light” and “Poison Years” gained power.  Of course, you knew those songs, Mould live staples, were going to be great; what was a particular draw was to see and hear numbers that he rarely plays live, such as “Sunspots”, the following “Wishing Well”, and especially “Brasilia Crossed With Trenton”, which gained not only power but also a haunt.

However, Mould & co. didn’t play all of Workbook.  First, after fourth song “See a Little Light”, they slipped in “Stand Guard” and “Stop Your Crying” from its follow-up, Black Sheets of Rain (that album was electric, so the songs didn’t stand out as much live), and then Hüsker Dü’s “No Reservations” (Dü is still always welcome).  They returned to Workbook with “Poison Years”, and breaking up the two singles on the set list did make sense.  But then “Brasilia” and “Sinners and Their Repentances” were flipped in order (fine), followed by “Lonely Afternoon” (another piece to gain power), and then… nothing more from Workbook.  Okay, the album’s penultimate “Dreaming, I Am” might have been too spacey to do live, and its final number “Whichever Way the Wind Blows” was already electric on record, but no “Compositions For the Young and Old To Sing”?!?  In addition to being an amazing song, which he never plays, it would have been perfect for the older audience at City Winery.

Instead, Mould launched into one from his most recent record, Silver Age (QRO review), “The Descent” (okay, naturally going to promote the last album, and fit with the set), and one from District Line (QRO review), “Walls In Time”, that he said, “Should have been on Workbook.  I don’t know why it wasn’t…”  Then two from Copper Blue, “Helpless” and “Hoover Dam” – awesome pieces, no doubt, but it’s not like he hasn’t been playing them a lot.  But they’re still too good to be upset about.

For the encore return, Mould & friends flipped the script even more, doing one of Jason Narducy’s songs, from his old band Verbow.  The piece was chronologically fitting (from 1995), and good – maybe if he’d done more of this he could have kept Sugar bassist David Barbe (someone in the crowd asked how “Dave” was, and Mould replied that he assumed they meant David Letterman, as he’d played Letterman the prior night – but someone else did yell out, “Dave Barbe!”).  Copper Blue’s “If I Can’t Change Your Mind”, maybe Mould’s most successful song ever (not counting writing the theme song to The Daily Show…), of course came in, and then there was a brand new piece (possibly titled “What Remains”).  Mould is releasing Beauty & Ruin on June 3rd, and it was a neat way to shift from the past to the future, by giving the crowd that loved the old stuff a taste of what’s to come.

If you were going to City Winery thinking that you’d hear the Workbook record that you’d loved for the past quarter-century, no, you didn’t get that.  Instead, you heard it revived and reformed – along with some other great stuff.  City Winery is a venue where Mould could have pulled off acoustic, but this gave the different experience of the original Workbook tour, which was electric.  And Bob Mould has so many great songs, of course he couldn’t play exactly what you wanted (but please do “Compositions”…).