The first day of CMJ was dedicated almost entirely to never-before-seen bands – to middling results.  During the day, it was bouncing between Piano’s (QRO venue review) and down a few doors to The Cake Shop (QRO venue review) for a few hits among the misses.  At night, headed over to the ‘CMJ Artist Lounge’ at the Red Bull Space in SoHo. 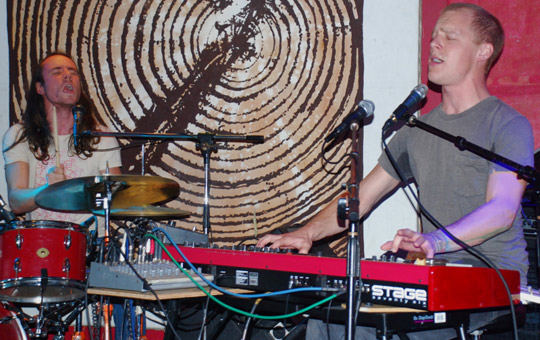 This Portland, Oregon duo had an orchestral ground-meets-small backwoods town sound, like a gothic, once-epic carnival staggering through the Pacific Northwest.  For only a singer/keyboardist and a drummer, they delivered a lot of sound – and a lot of energy for the afternoon of the first day of CMJ.  Definitely an art-rock, critic’s-fave type of group (recommended by another critic), Au did lack in hook, but were certainly original, and the drummer’s scattered beats were impressive.  They were probably better when they opened for The Dodos (QRO photos) at Spiegeltent (QRO venue review) recently, as that was a more fitting venue than Piano’s – but at least it was dark inside. 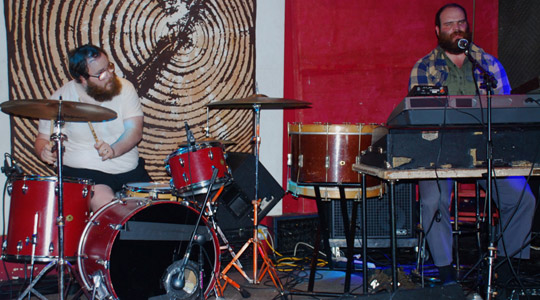 Another keys/vox & drums duo followed up, and had the same energy (though larger fellas, with less hair on top & more on the chin…), but weren’t as strong.  Their scattered beats felt lacking in rhythm.  Funny guys, though – and packed house. 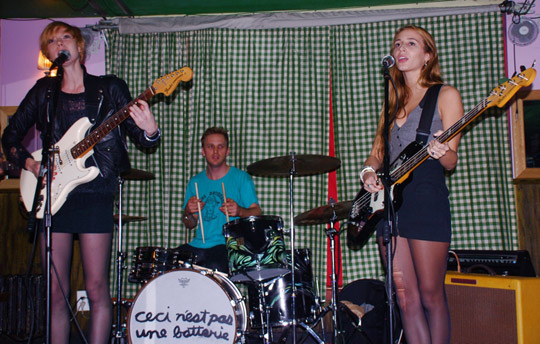 Her girl-group garage-pop was certainly nice, if not overwhelming.  And her leather jacket had a fifties feel – even the French writing on the bass drum had a certain ‘French New Wave’ air. 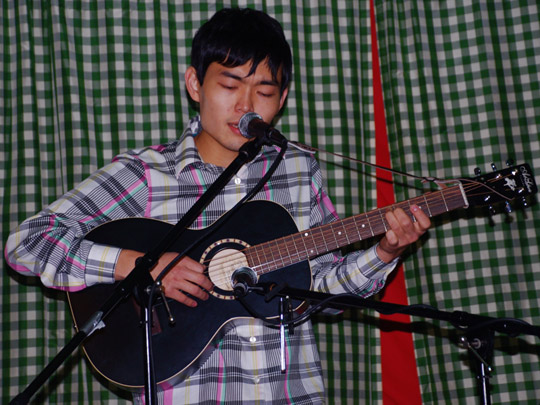 Didn’t know that Pwrl Power was one guy – had actually asked him, during Lissy Trullie’s set, if this was Lissy Trullie or Pwrfl Power, and misread his confused reaction as he didn’t know…  His alt-folk was touching, and was maybe the act that best fit the venue on Day One, upstairs at Piano’s. 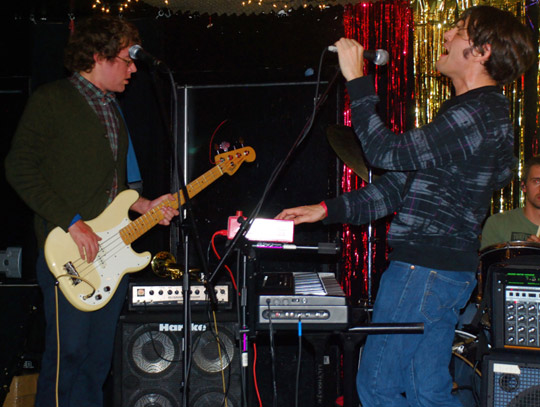 Their emo-grand indie-rock sounded a little young & heartfelt.  More enjoyed hearing David Bowie’s "Life On Mars" over the speakers in between sets at Piano’s afterwards (but to be fair, that’s a great song – QRO’s ‘Music of the Spheres’). 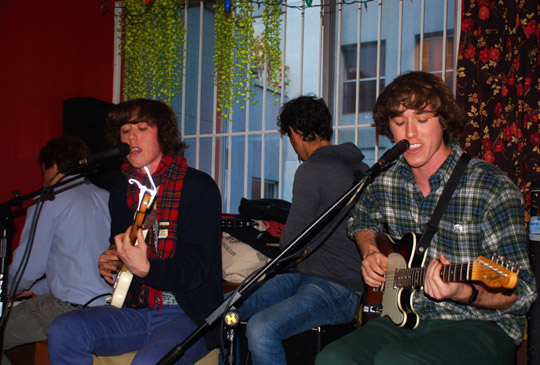 Along with Au, Princeton was the best band of the afternoon – and the only one stuck around for the whole thing.  The twin brothers joked with the crowd about last CMJ, their goal being to play the small Cake Shop – "So we’re living the dream…"  There was also their drummer, caught on the train, who arrived one song in – they said they felt like they were cheating on him, by using a drum machine.  Admittedly, the drum machine did not fit – they even admitted it was excessive on one song.  But, after a brotherly joke-argument ("Just been watching that Oasis Behind the Music documentary too much…"), they finished with a touching cover of Cindy Lauper’s "Girls Just Wanna Have Fun".  They’re working on a full-length follow-up to 2006’s A Case of the Emperor’s Clothes EP (QRO review), which sounds good.  Only downside to the band?  They’re not actually from Princeton – are named after their home street… 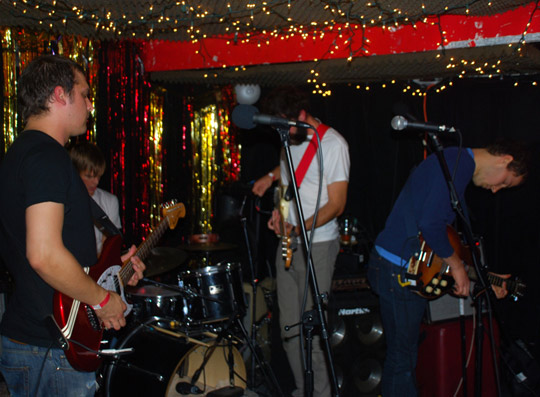 Only saw the tail end, but still not impressed with them.  Why have they been the Vancouver band that’s blown up (relatively speaking – signed with Jagjaguwar), and not better ones like The Great Outdoors (QRO album review)? 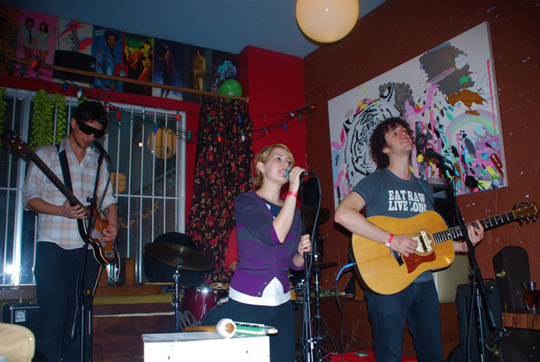 Didn’t see all of them, but definitely third-best band of the afternoon, behind Au & Princeton.  Peppy, if slightly strange (especially the bassist’s all-shade sunshades that he wore indoors – made him look like he was blind), they had winning personalities, joking about all the portraits upstairs at The Cake Shop.  "We know them, but we don’t know you…" 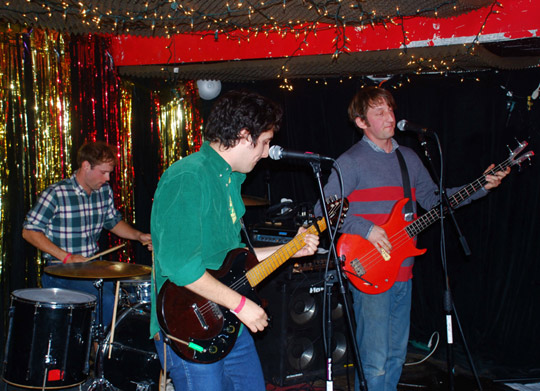 They felt akin to the Vampire Weekend/Tally Hall (QRO photos) indie-prep, though mixed with some indie-rock, like a Midwestern prep school, not New England.  Enjoyable enough and upbeat, this also felt like a regular Cake Shop show. 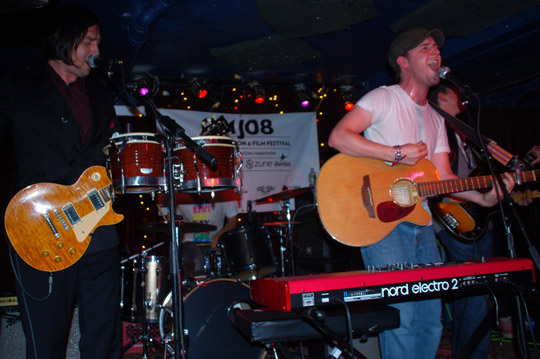 I’d been told that Middle Distance Runner (QRO interview) had broken up, but thankfully, they haven’t.  Their indie-blues/country had some sway and/or guitar-rock live (QRO live review).  It was a little tough, being the first act of the showcase, but that did mean less competition from other shows.  Plus, they were handing out a free EP… 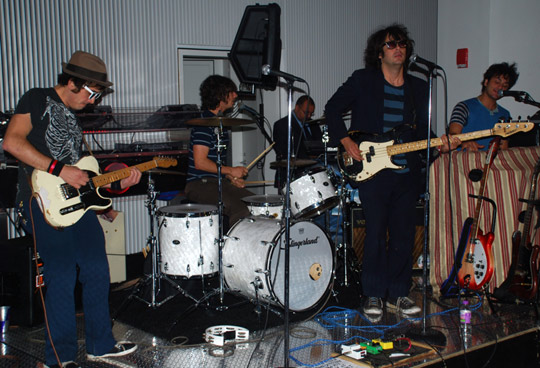 The seventies party guitar-rock of Gringo Starr was a little Tom Petty-ish, or, for more recent comparison, Sam Champion (QRO spotlight on) – including the hatted guitarist.  However, their changing of instruments was more akin to follower Wild Light (QRO photos) – though they even changed who was drumming (more Sebadoh – QRO live review): when the guy you though was the frontman is later playing drums – and the drummer is now singing – it can be hard to get a handle on things.  The Red Bull Space was the ideal place for a party band, though, with all the corporate logos & security/servers in black. 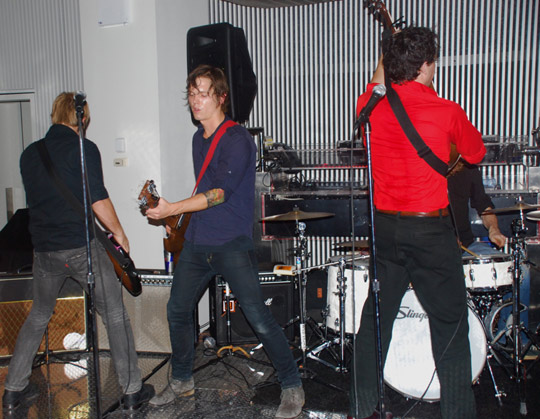 Really the only ‘familiar’ band of all of Day One, this was the best Wild Light (QRO photos) have sounded yet: epic, grand, and heartfelt, without being emo or overwrought.  Three different-looking young men, one sun-bleached surfer-looking, the other urban with arm tattoos, and the other more intellectual (who always wears the same red shirt – what is he, an extra on Lost?…), trade off guitar, bass, keys, and vox, impressively not missing a beat (helped by the double-duty drummer of Hooray For Earth – QRO live review) and coming together as something.  There was a problem with a stray cord creating static during some songs, but at least it was the kind of technical difficulty that was obvious and could be discounted.  They mostly did tracks from their upcoming new record – but still finished with "Fuck California". 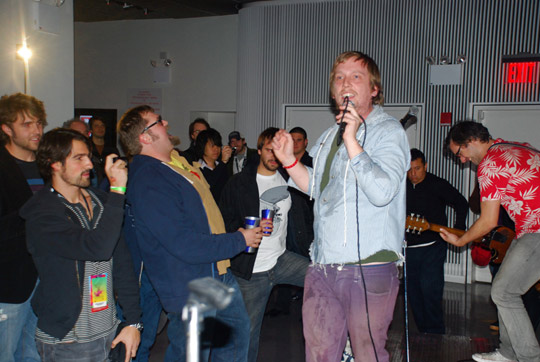 The seventies came back with a vengeance in the party drunk-rock of Cheeseburger (who singer sported Mick Jagger-like chicken poses).  He encouraged the crowd to not just come up to the stage, but onto it – and when one girl did, security came to gently pull her off, only to have her pulled back the other way by the singer.  A few die-hards lit things up from the get-go, despite security – who did manhandle out one guy (just to prove their ‘cred’…).  Like a dirty-rock Les Savy Fav (QRO photos), them & the free booze challenged the small, fancy space & heavy security.  They’re likely not as good on record – also like Les Savy Fav (QRO album review), but certainly hot live… 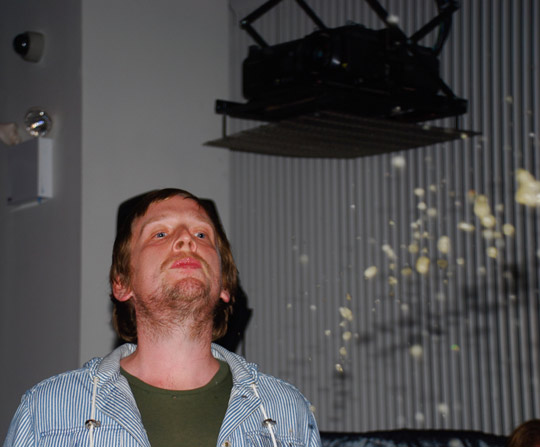 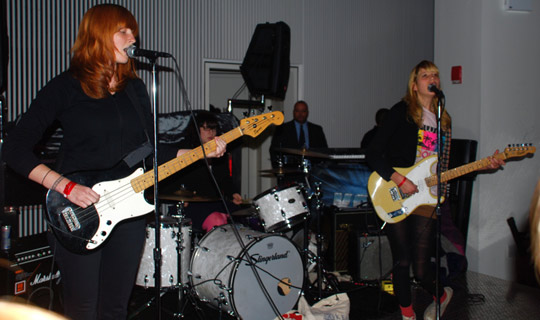 One of the garage-rock revival acts coming out of Brooklyn, along with Crystal Stitls (QRO photos) & caUSe co-MOTION (QRO photos), their sound was pretty similar to that on their self-titled debut (QRO review).  Their new drummer read from PASTE Magazine‘s suggestions for what to say between songs – kind of mocking their hosts, but did encourage people to pick up a free PASTE Magazine…

-Crystal Stilts (QRO photos) @ Studio @ Webster Hall, after midnight.  Stereogum’s late night, opening night party filled up on its RSVP list early – but word is Crystal Stilts still ended up playing to a thin crowd, ’cause they didn’t go on until 3:00 AM…

-Twice was told the wrong directions to get the CMJ handbook & goodie bag.

-Saw actress Amy Carlson (Third Watch, Law & Order: Trial by Jury – a.k.a., the one Law & Order that got cancelled) with Syd Butler of Les Savy Fav – and not for the first time: she was at the Les Savy Fav show recently at Music Hall in Williamsburg (QRO photo of Amy Carlson rockin’ with Les Savy Fav singer Tim Harrington).  Now where’s SNL‘s Fred Armisen (QRO photo of the Barack Obama impersonator keeping Harrington from falling off the balcony at Music Hall)?

The Wedding Present & The Jealous Girlfriends