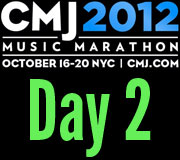 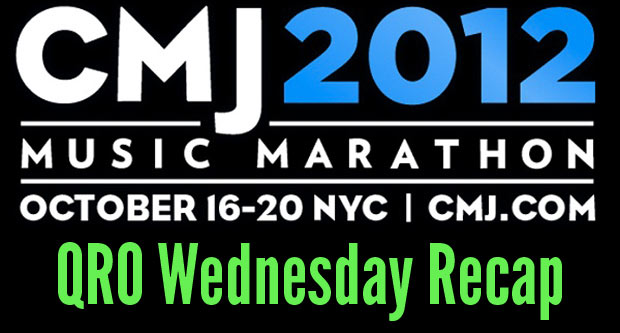 At first glance, CMJ 2012 looked to continue the long, sad tradition of CMJ not being what it once was, with a dearth of big-name acts.  But do you go to CMJ to see big-name acts?  No, it’s for catching the million-and-one up-and-coming indie outfits out there (and it only seems like most of them are from Brooklyn), as well as showcases by labels, site, PR companies, magazines, and anyone else who feels like putting one on.  Plus the free drinks.  And there was much to be found, Tuesday to Saturday, October 16th to 20th:

After a trouble-plagued Day One, Day Two was a serious improvement, thanks to Sneak Attack Media & FADER. 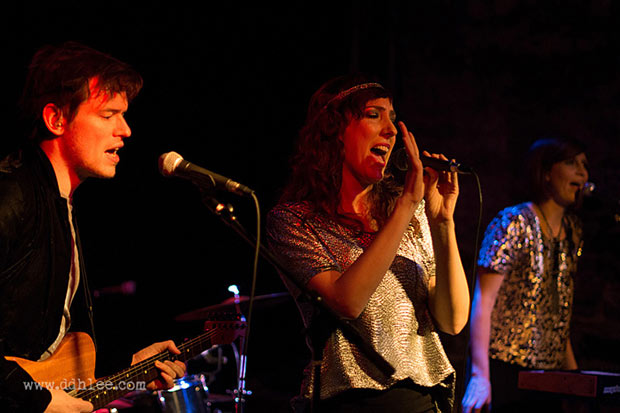 Headed to Bowery Electric early, though unfortunately not early enough to catch WOJCIK – but did see the rest of Sneak Attack Media’s showcase, starting with Clementine & The Galaxy.  There were like a more party Class Actress (QRO album review), but also covered Nirvana’s “Heart-Shaped Box” (and they ain’t no Lana Del Rey…), and had a ukulele song. 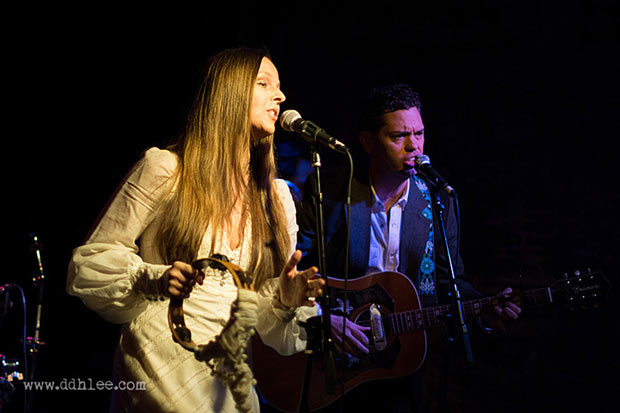 The country-blues Tall Pines were up next (though with an act every half-hour, the sets weren’t very long).  The male singer/guitarist reminded of a younger, friendlier M. Ward (QRO album review). 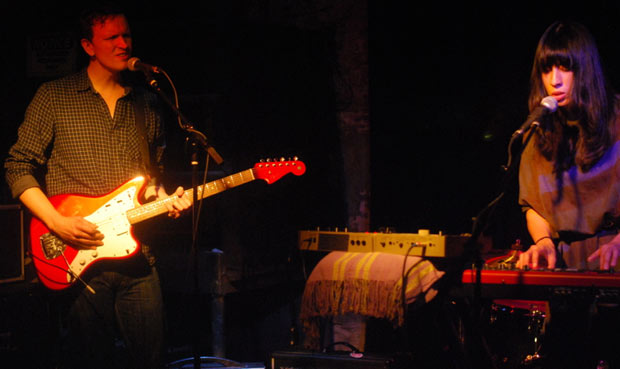 Magmana went for the spookier, but there were also a bit of country undertones to them. 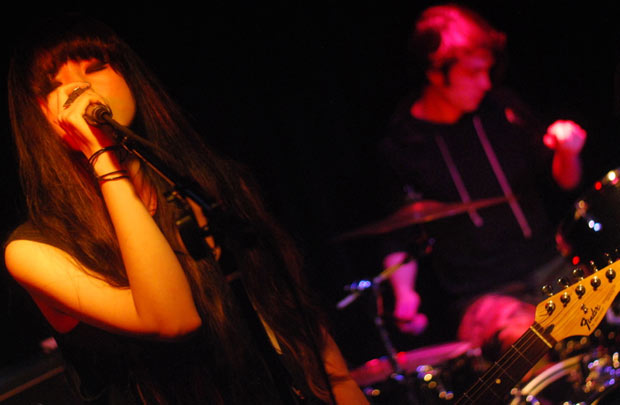 3:00pm had the hour of free beer – always best at afternoon showcases to hold the free drinks until later.  Otherwise you get the free drinks when you don’t want them, around the noon start time, and they’re done long before even the earliest of cocktail hours.

GHXST (pronounced ‘ghost’?…) had some heavier power-rock, in a female-fronted trio. 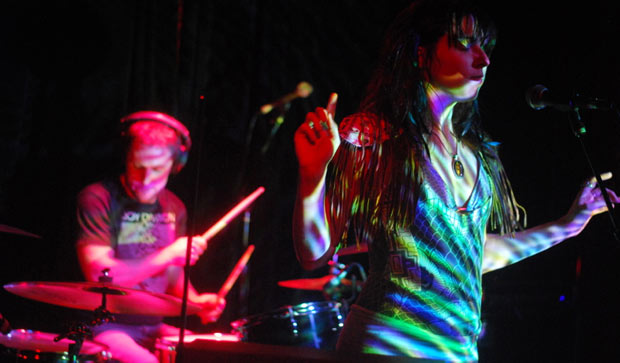 Sneak Attack brought at a bunch of female-fronted outfits (including WOJCIK) to Bowery Electric, and Dynasty Electric brought back the electric to Bowery Electric.  Party-electric like Clementine & The Galaxy (see above), but even more active, and some harder rock elements.  And had pretty good lighting considering it was from a projector.

Click here for photos of Psychobuildings at Studio at Webster Hall in New York, NY on September 17th, 2012 in the QRO Concert Photo Gallery

The only all-male outfit at Bowery Electric was Psychobuildings, but that’s because he was just one guy singing to backbeats.  Probably scheduled to close out the showcase because he’d have the quickest set-up and breakdown time, he couldn’t really captivate. 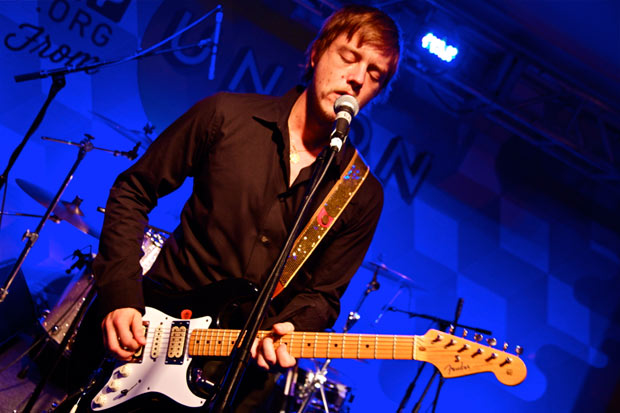 Left Bowery Electric to meet up with Derek Klevitz at the ‘Union Square Ballroom’, which was taken over by CMJ as ‘CMJ Union’ during the festival – and during the day also by KEXP, which broadcasted from the space.  The space was surprising not filled for Paul Banks, the frontman for big-name neo-New Wave outfit Interpol (QRO live review), who was playing behind his new self-titled solo record (after having previously worked solo under the moniker ‘Julian Plenti’ – QRO tour review).

Admittedly, Union Square is a little northwest of the Bowery area, but is also only a little north of where one gets ones badge, and right on the L from Williamsburg – not that far to go.  Perhaps the room to breathe at the place was due to people thinking it would be too hard to get into, it being a hump day afternoon, or just because Banks solo isn’t so special anymore.  His solo material sounded like a less bass-heavy Interpol (no Carlos D…), but didn’t show why exactly he needed to do this stuff without the rest of the band.

QRO’s Danielle Sheridan took in a CMJ show at Tammany Hall with Riot In Paris. 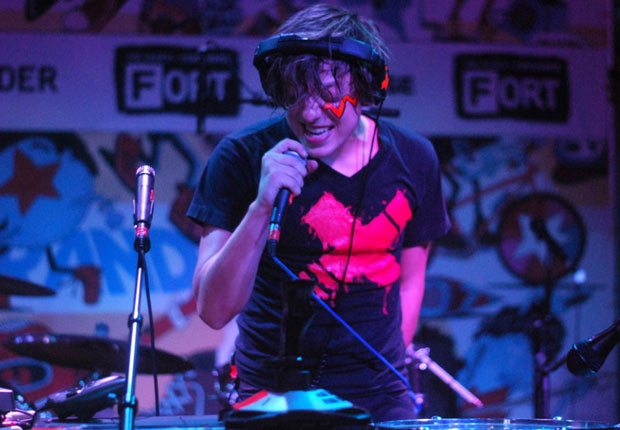 The hands-down best showcase at CMJ 2012 was the Wednesday-Saturday FADER Fort.  FADER magazine always brings its huge FADER Fort for a big, great time at SXSW (QRO recap), but at the less-essential CMJ, it is different sizes each year – sometimes a big space, sometimes not, sometimes many days, sometimes only one.  And it moves around, from Ace Hotel more uptown to Chelsea last year, Bowery the year before that, and this year not just to Brooklyn, but the other side of the BQE.  Oh, and the lack of cell coverage & crappy new Apple Maps didn’t help finding it, either.

The space was smaller this year, which resulted in a much smaller RSVP list that filled up super-quick, but you could get a wristband if you asked someone getting theirs if you could have their +1.  Everyone RSVPed for a +1, but you had to be there with your +1 to get the +1 their wristband (no leaving their name), which actually meant that those people who were willing to go to the place, no matter what, actually could get in.

Opening up the place was Robert DeLong, who felt like a male, electronic tUnE-yArDs (QRO live review), though perhaps that was because of the face-paint. 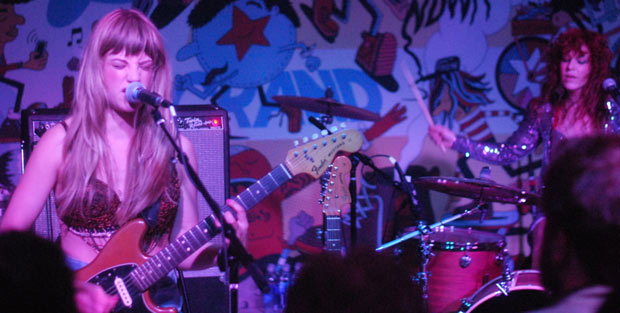 The stage at FADER Fort wasn’t very high, and the crowd got thick on the first night (and a little unconcerned/annoyed at anyone else trying to move through it), so it was pretty hard to see Deep Vally – but not hard to hear them.  Move over Screaming Females (QRO live review), this is an all-girl heavy guitar-garage rock trio.

And if that wasn’t your thing, easy enough to hang at the bar with all the free drinks and very friendly bartenders – though QRO has always been a big believer in tipping for drinks, even free ones, so your correspondent was particularly popular with them… 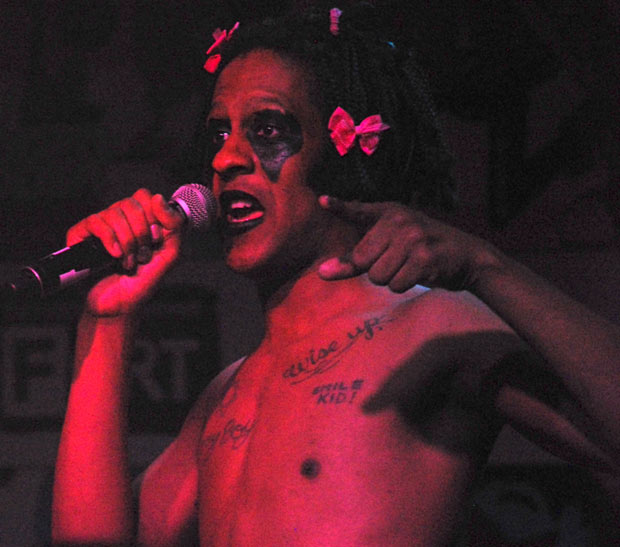 A rapper with his shirt off (in October), pigtails, and harlequin make-up – Mykki Blanco could have been bad, but wasn’t.  Alternative music has inexplicably been embracing gangsta rap and its world (despite the two having completely differing musical styles & personal/political philosophies, not to mention rap hardly returning or even acknowledging the embrace), but Blanco was more out there.

Rising Swedes Icona Pop were booked seemingly everywhere at CMJ this year, including at Glasslands (QRO venue review) on the East River in a matter of hours, yet those seemed to be just DJ sets – but not at FADER Fort, where they were a full-on band (though still just the two of them).  The pair have been getting a lot of hype, and pretty much lived up to it with a great electro-girl set at FADER Fort. 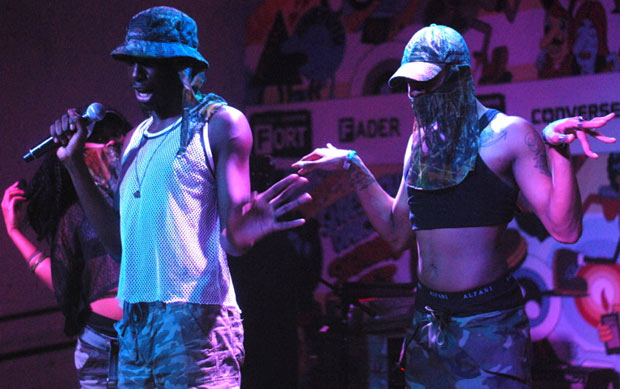 Like Mykki Blanco (see above), Le1f wasn’t your ‘standard’ macho rapper – one of his two dancers was a semi-cross-dressing guy.  Neither Le1f or Blanco were Nicky Da B (QRO photos) or Big Freedia (QRO photos) level of hip-hop transexualism, but certainly more than one might expect if you’ve been conditioned to see rap music in macho stereotypes.

-Ran into most of longtime QRO favorite Ra Ra Riot (QRO spotlight on) at FADER Fort, including violinist Rebecca Zeller, guitarist Milo Bonacci, and bassist Matthieu Santos (QRO interview) – but where was their manager, who’s seemingly at every show QRO goes to (and even the same Mets game)?  The group wasn’t playing CMJ, unfortunately, but have a new album coming out in January.