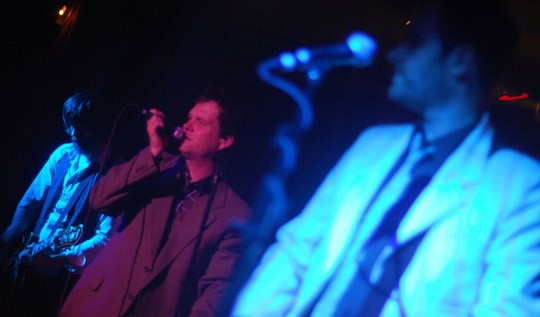 You can take the Electric Six out of Detroit, but you can’t take the Detroit out of Electric Six.  The hard times, hard-rocking Motor City has birthed many musical acts, but Electric Six has always been one of the craziest – especially live.  So what happens when you put the band in an ultra-classy place like Chelsea’s Hiro Ballroom (QRO venue review), give them a light show & smoke machine, but also a curfew?  The crowd might have been a little thinner & a little older on Friday, October 16th, and they didn’t trash the place, but E6 still ‘electrified’. 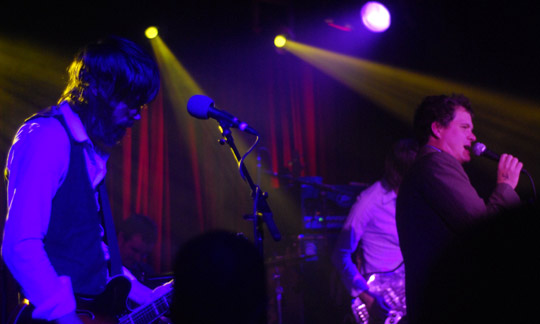 Click here for QRO’s interview with Dick Valentine in 2006

In the last few years, Electric has been very busy, putting out a record a year these past five years, and normally doing two or three tours a year.  They were in New York only two months prior to the Hiro Ballroom date, returning to the Rocks Off Concert Cruise (QRO venue review).  But they came back in October, near the start of their ‘I’m Trying to Cut a Fucking Spot, Tony’ tour, and days before the release of their latest, Kill ().  And for some reason they were playing Hiro Ballroom, the bar/nightclub downstairs from the Maritime Hotel in Manhattan. 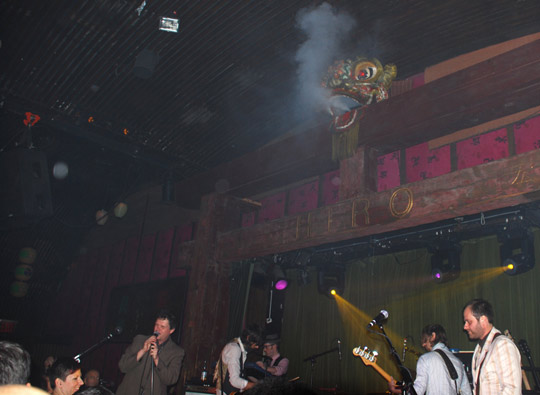 Click here for QRO’s review of Electric Six aboard Rocks Off Concert Cruise in New York, NY on August 14th, 2008

Click here for photos of Electric Six at Southpaw in Brooklyn, NY on December 12th, 2007 in the QRO Concert Photo Gallery

Multiple people have already said this (QRO interview), but what Hiro Ballroom most looks like is the Japanese bar at the end of Kill Bill, Vol. 1.  Not only are there Japanese lanterns dangling from the ceiling, and Asian-themed artwork (and beer, even…), but also everything is on low levels, whether benches, steps, or the stage, just maybe a foot off the floor (and obviously added for the event).  Everything was made out of dark, thin wood, while the light show was like a Japanese discotheque – there was even a carved dragon’s head above the stage, which occasionally would spew forth smoke!  Most significantly, the entire show had a curfew, but Electric Six promised & delivered at least one song from every of their now-six records. 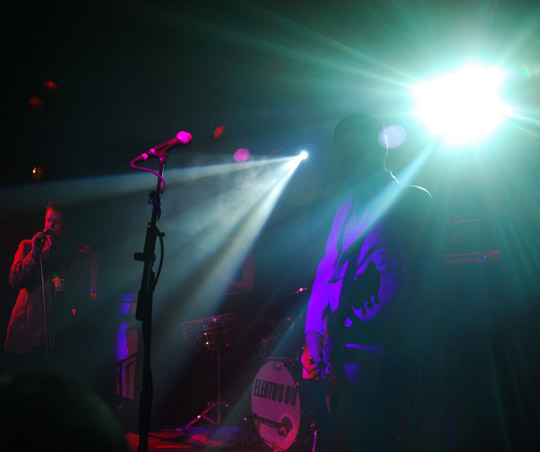 Click here for QRO’s review of Electric Six at Middle East in Cambridge, MA in September ’06

Naturally, the new stuff dominated the set list (QRO photo), with four songs each from Kill and the preceding Flashy (QRO review), but only one each off of Señor Smoke, Switzerland, and I Shall Exterminate Everything Around Me That Restricts Me From Being the Master (QRO review).  E6 was a little apologetic about playing the not-quite-yet-out material, singer Dick Valentine 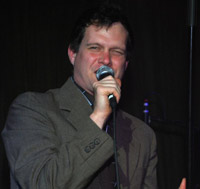 (QRO interview) saying before Kill‘s "song about cloning", "Steal Your Bones", "Just one new song about cloning, and then we’ll play the hits…"  A few from Kill, like "Steal" and "Waste of Time and Money", didn’t get the immediate positive reaction from the crowd that older Electric Six songs usually get, but opener "Egyptian Cowboy" and especially mid-set "Body Shot" already look to be live staples, judging from the audience’s fervor during them.  Flashy‘s "Dirty Ball" might not have justified its inclusion on the set list, but "Formula 409" & "We Were Witchy Witchy White Women" certainly did. 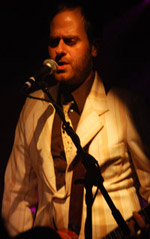 Electric Six is still a band that lives somewhat in the shadow of their debut/breakthrough/still most popular record, Fire, but they didn’t ignore that, hitting up four from Fire as well.  Yes, they played Fire hits "Danger! High Voltage" and "Gay Bar", their still most popular songs, but also played with them.  During "Gay Bar", they stopped and cut the song short, basically inviting the crowd to shout, "It’s not over yet!", and then jumping right back in (they also followed up "Gay Bar" with the mock-sequel off of Flashy, "Gay Bar Part Two").  And before "Danger!", Electric Six did an impromptu cover of INXS’ torch song, "Never Tear Us Apart". 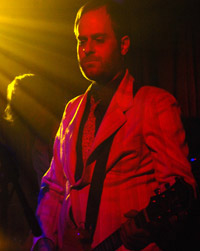 The low levels of Hiro let the crowd spread out, and that plus the classy nature of the place helped keep the crowd from going completely nuts (basically, the exact opposite of what happened last year on the tiny dance floor aboard The Temptress – QRO live review).  Not that there was no craziness: one beefy, short, bald, Matt Pinfeld-looking guy started a mosh pit – with a forty- or fifty-something man there with his wife (and maybe even his teenage son…)!  That older couple were the most active at the show, from the mosh pit to, during "Never Tear Us Apart", mock-ballroom dancing in the not-really-a-ballroom Hiro (but are Bowery Ballroom – QRO venue review – or nearby Highline Ballroom – QRO venue review – really ballrooms either?…). 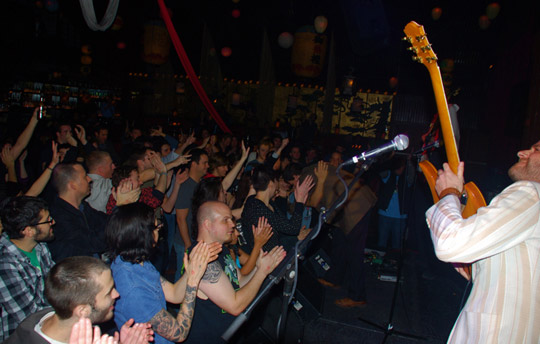 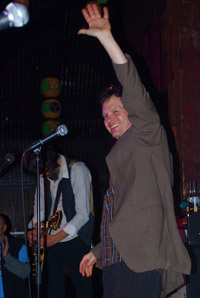 Dick Valentine (QRO interview) was his usual jovial, engaging self, joking about such matters as not seeing the balloon boy throwing up on the Today Show ("That’s one of the problems with being in a band on tour – you miss everything that happens before 1:00 PM…"), lauding drummer Alonso who "lives in the Chelsea Hotel down the street!", praising the dragon above him & "controversial lesbians in the V.I.P. section…", and riffing that everyone was going to be thrown out once the show was done.  However, the band actually got to play one more song before curfew; Valentine threw it to the crowd, who all yelled out different songs in a confusing cacophony – he replied, "I feel like the host of Romper Room…" (finally decided on Fire‘s "Synthesizer").  Valentine also revived his waving to the crowd tradition – twice for each side – and also twice hugged a fan up front (a guy, cruelly not "sharing the love" with the fan’s girlfriend, right beside him…). 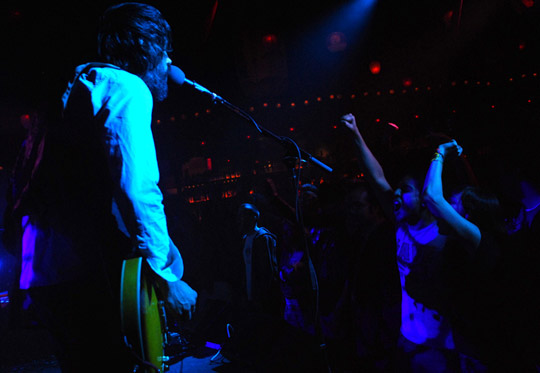 Valentine promised that, at their Sunday night show at Southpaw (QRO venue review) in Brooklyn, "You will hear every song in the Electric Six catalog – for five thousand dollars!"  Hiro Ballroom might not have been the perfect fit for the band, but they’ve played Southpaw before (QRO photos) & likely will again after Sunday, whereas the crowd at Hiro got to see Electric Six rock in a special setting. 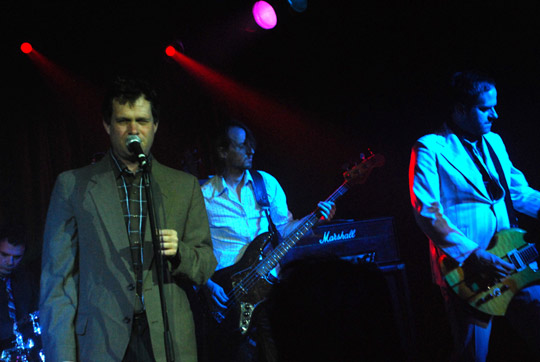