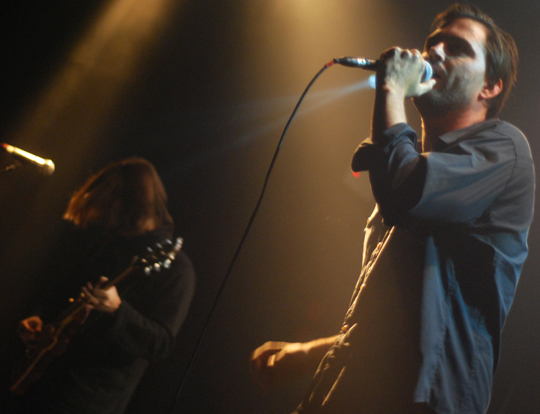 Near the end of their set at Gramercy Theatre in New York on Saturday, January 16th, Elefant singer Diego 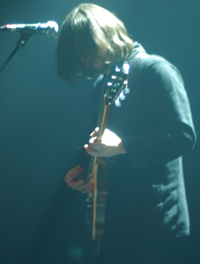 Garcia asked, "Can you turn the lights on in here?  Turn on as many lights as you can.  Our music is not really dark, and we’ve been fucking that up for seven years now."  Brightness done by art-rockers is Elefant.

It’s been around seven years since Elefant broke through with debut LP, Sunlight Makes Me Paranoid, and single "Misfit", including a somewhat ill-judged, trying-to-please-the-larger-distributing-label sophomore release, Black Magic Show, and the band has laid rather low recently.  But they’ve been working on a new record, and scheduled the one-off local show ("I live just a few blocks away") to showcase their new material, while also bringing back the Sunlight. 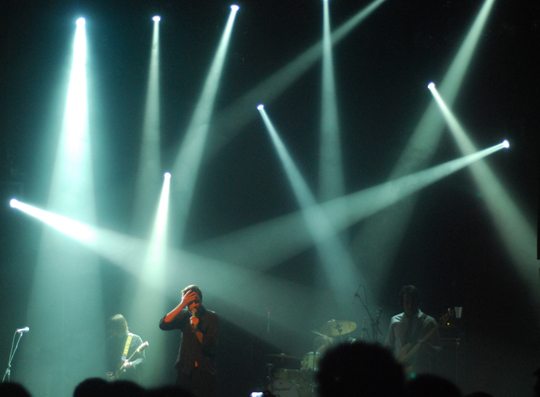 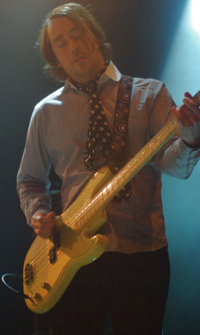 It did take a little while for everything to warm up.  Gramercy Theatre (QRO venue review) is a bit of an odd duck, a venue farther north than any rock concert hall this side of the massive Madison Square Garden (QRO venue review) & Terminal 5 (QRO venue review) – it’s even gone through two name changes in its less than three years of being open, from ‘Gramercy Theatre’ to ‘Blender Theater at Gramercy’, then back to ‘Gramercy Theatre’ again (after Maxim spin-off Blender folded – but why did they change the spelling of ‘Theatre/Theater’ twice too?…).  The rather sparse, somewhat dusty converted movie theater also keeps the audience at a distance, both in its set up and in its overuse of smoke machine.  Hardly a regular haunt, the booking didn’t help either, with four bands that had little to do with one another besides all being from New York: Elefant, The Silent League (QRO album review), The Subjects (QRO spotlight on) and Storms.  With doors at 9:00 PM, the set times were rather smushed together, and then Storms cancelled, bumping everyone forward a slot; so if you arrived at, say, 10:00 PM, expect to see all of The Subjects, then The Silent League & Elefant, all you did get was the last half of The Silent League’s last song (not that that was necessarily a bad thing…).  If you were only going for Elefant, you may have gotten there too late.  And it’s never easy to draw in January in New York (especially this bitterly cold winter…). 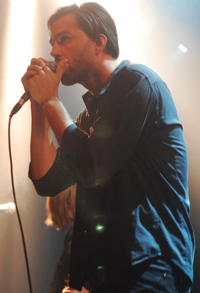 Whatever the reason, Elefant’s first few songs, including Sunlight‘s "Tonight Let’s Dance" and "Make Up", as well as new number "Cereal", didn’t connect with the crowd the way they should have, but thankfully things would get going, starting with the brighter and more relaxed new "La La La La La", followed by Sunlight‘s "Ester" and "Now That I Miss Her".  After the latter, Garcia told the crowd that his feeling was "hard to describe – I’m a little freaked out, but happy to be back."  Garcia has the look of a dark, moody art-rock model, but his attitude, and the attitude of Elefant as a whole, is far more upbeat, and perhaps no piece that night captured it as well as the subsequent new "Olio".  The bright, catchy bop by art-rockers (similar to, but better than, "Cereal") led into Garcia’s request for as much light as possible, and he wasn’t wrong.  "Bokkie" kept up as the best Sunlight song after "Misfit", and their final "Goodbye" was some ‘happy to be in love’ art-rock, akin to a younger Morrissey (QRO live review) when he might be happy.

The departure felt a bit early, but it gave Elefant time for three encore return songs (all from Sunlight – The Black Magic Show was nowhere to be seen), "Sunlight Makes Me Paranoid", "Love", and "Misfit".  And it let Elefant rock out particularly joyously out of "Misfit", with drummer Kevin McAdams (QRO interview) keeping the song going after it ended, prompting guitarist Mod to keep going as well, with Garcia telling the crowd, "That’s the sound of blood boiling" – and even jokingly castigating bassist Jeff Bercall for leaving the stage; when Garcia turned around to find Bercall gone, he picked up the man’s bass and pointed it accusingly at him off-stage.  Garcia then returned for one final flourish, unplugging his mike and tossing it to one particularly in love with him fan (who’d also gotten a high-five from McAdams at the start of the encore return). 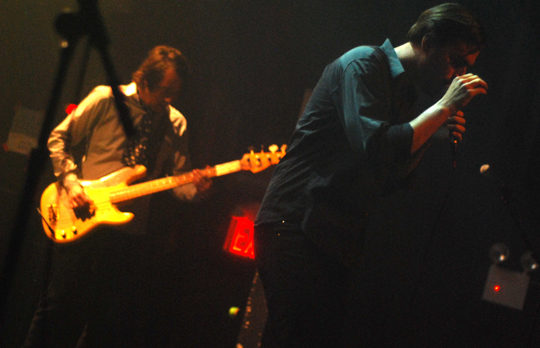 The crowd wasn’t particularly thick, and featured a rather odd mix of bridge & tunnel and Village, but that didn’t dissuade Elefant from being their own odd but winning mix, of brightness and art-rock.