It is always tricky, when the beloved frontperson of a beloved act does the solo side-project thing.... 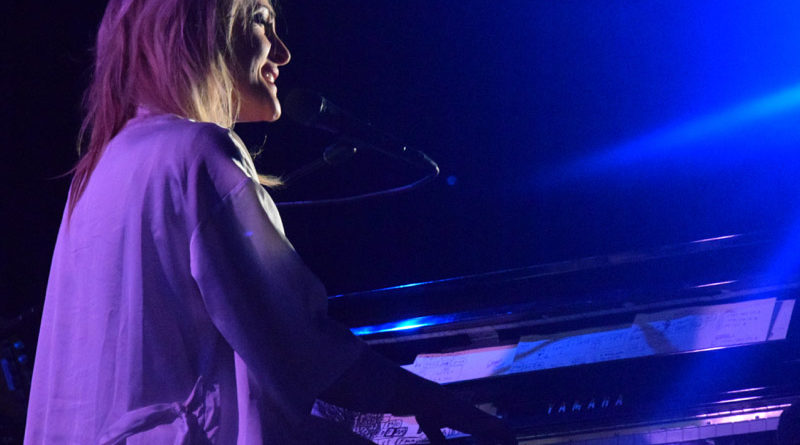 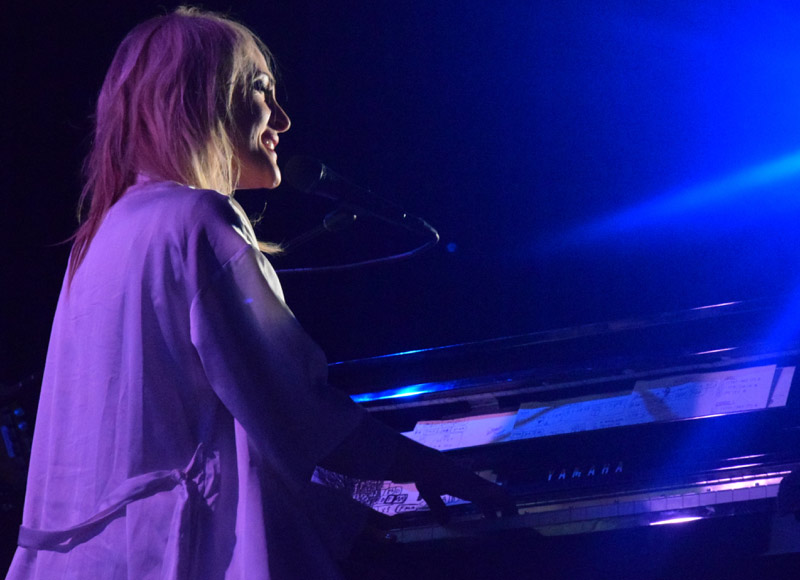 It is always tricky, when the beloved frontperson of a beloved act does the solo side-project thing. “Can he or she be as good without the rest of the band?” “Why do these solo songs, and not just include them in the main band?” “Is this a hiatus one-off, never to be repeated?” “Is the band breaking up?” “Is this a vanity project?” The problems have dogged the likes of The Arcs (a.k.a., The Black Keys’ Dan Auerbach’s unnecessary side-project), but Metric’s Emily Haines has pulled it off beautifully before, as ‘Emily Haines & The Soft Skeleton’ with 2006’s Knives Don’t Have Your Back, 2007’s What Is Free To a Good Home? EP (QRO review), and this year’s Choir of the Mind (QRO review). And she brought her Mind and her Choir to Brooklyn’s new Murmrr Theatre on Thursday, November 30th, for a unique night. 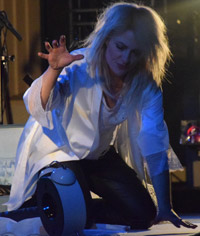 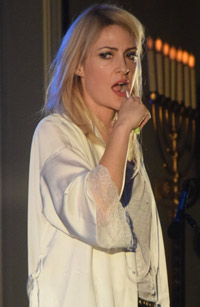 Haines opened up the opener-less show (40 minutes after the scheduled start time…) with a performance art-like work. She strode on stage solo with a suitcase, opened it, pulled out a bed sheet & putting on a nightgown, and acted like she was sleeping (including sleep mask). Her alarm (also on stage) went off and she got up, brushing her teeth. Then came her own voice, not from her (full of toothbrush) mouth but a voiceover, questioning why she was making new music, when there is already the old “sonic time capsules.” She basically challenged the very concept of her making a solo record, asking, “Why?”

Then Haines proceeded to show Murmrr Theatre why. Alone on piano, she played haunting and intimate versions of Choir’s “Planets”, “Wounded”, “Crowd Surf Off a Cliff”, and “Nihilist Abyss”. Note that this was all to the hushed, seated crowd at Murmrr (which is unusual in that it is a seated venue, including balcony, but without assigned seats, just general admission – oh, and one can’t bring drinks from the third floor bar into the seated area – something that your correspondent discovered too late; he recommended they start putting coffee tops on all drinks, like is being done now in Town Hall, which used to have the same issue – QRO venue review). Choir is decidedly a hushed, up-close-and-personal record, and Haines delivered that with her open. 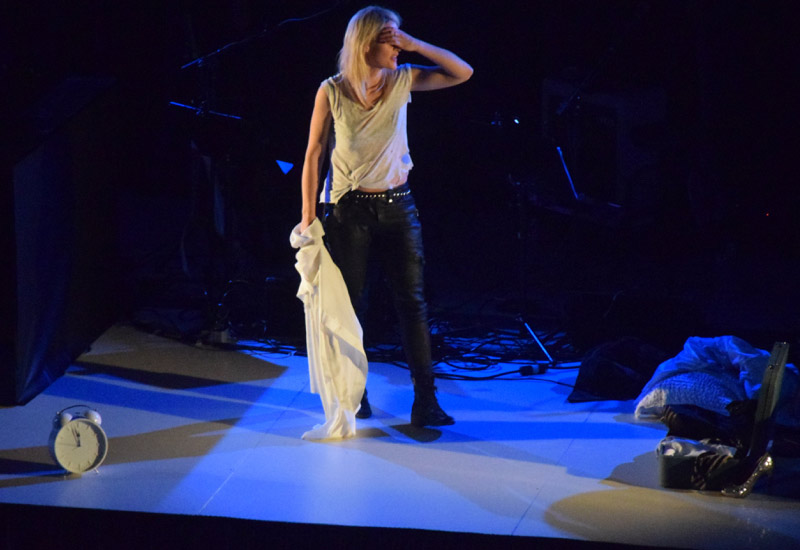 But it wasn’t just Haines alone. After “Abyss”, her voiceover returned, telling herself that she didn’t know what the time was (Haines acted out checking her alarm clock and getting freaked out), that she’d booked a tour “for some reason,” and had to get ready. Off went the nightgown, on when the leather jacket, and out came her backing band, “The Soft Skeleton.” Sam Goldberg and Justin Peroff of friends Broken Social Scene (QRO spotlight on) were doing duty on bass & drums, while on guitar was none other than Metric’s own Jimmy Shaw. Just in case you were worried that this was some ‘I can’t stand the rest of my group and need some time away from them’ – Metric bassist Josh Winstead was even in the audience (in his own reserved seat).

After the pin-drop quietness of the open, the show did need to shift into a bigger sound, lest it become uncomfortable (though Haines & The Soft Skeleton, like the crowd, were seated). The rest of the set was only ‘traditional’ in the broadest term of a rock show. The set list shifted decidedly to Knives with “Our Hell”, “Detective Daughter”, “Mostly Waving”, and “The Maid Needs a Maid”, letting the crowd know that this wasn’t just about Choir, but also her first solo record, which had established Haines as a voice in her own right. There was even one from Good Home?, “Sprig”.

Haines even spoke to the crowd like at a ‘regular’ show. She praised New York City, it’s importance in art, including how her parents had lived in Greenwich Village in the sixties, before moving to India and then, when the “first Trudeau said it was okay to come up here, if you’re freaking out,” back to Canada. Haines admitted that she has always been chasing that idea of her parents’ New York, trying to see if you can have an “authentic life next to a frozen yogurt,” but noted that if she had not been in Canada, she would have never have met the guys on stage with her, introducing each one. 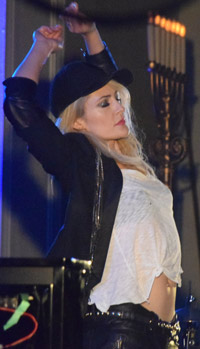 The performance launched into its biggest portion late in the set. After “Sprig” came Choir’s “Legend of the Wild Horse”, which could have just as easily been about Haines, or even her parents, then three from Knives, the record’s stand-out “Doctor Blind”, “Reading In Bed”, and the piece whose line gave that album its title, “Winning”, before closing with Choir’s “Fatal Gift”. For “Winning”, Haines returned to solo, as well as the start of “Fatal Gift”, but the band returned, with a big into the encore break chorus of “On it / Owns you,” repeated while Haines got up to her feet.

And she returned after the encore break on her feet (though solo), for Choir’s “Strangle All Romance” and the title track, singing directly to the crowd, finishing with “Choir” chorus, “Love is my labor of life.” Other than the performance art pieces and chorus of “Fatal Gift”, until that point Haines had been behind her piano, sideways to the audience, but this gave the crowd the direct experience that they had definitely hoped for from a Haines solo performance.

Choir of the Mind, like Knives Don’t Have Your Back and What Is Free To a Good Home? before it, is decidedly different from the more electro, more rock work of Metric, and important distinction in giving Haines’ solo material their own life & purpose. And her solo tour is likewise unique and compelling.