The recent tour that has hit the U.K. follows the release of Enter Shikari’s latest studio album, 'The Mindsweep', released last month....

The recent tour that has hit the U.K. follows the release of Enter Shikari’s latest studio album, The Mindsweep, released last month. Once again recorded with Dan Weller, their latest album is full of “some of the rawest, angriest vocals” they’ve ever done as well as some of the most “dulcet and delicate.” The anticipation of hearing the band play through their new material, live, was almost too much to bear. 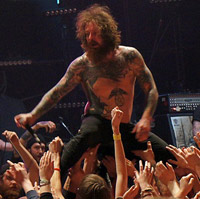 On Wednesday, February 18th, Wolverhampton Civic Hall saw the likes of Fatherson, Allusondrugs and Feed the Rhino spectacularly warm the stage up for the headline act. Feed the Rhino were an undeniably memorable penultimate performance as they stormed onto the stage instantly cranking out the first tune of their set: “Behind the Pride”. Their set list continued with thrashing guitars, powerful drumming and, of course, a raring, head-banging crowd. It didn’t stop there though, as vocalist Lee Tobin launched himself into the crowd, easily continuing the set whilst a sea of hands (heads, faces…) supported him.

The main headline act, Enter Shikari, were due to be up next, but not before prolonging the wait for the eager crowd with an exciting countdown and a lengthy introduction to lead up to their first song, “The Appeal and the Mindsweep I”.

The lighting throughout the show was fast and furious and it often became hard to keep your eyes focused on the band because of the sheer intensity – a perfect match for their music, which was equally as intense, in regards to both sound and lyrics.

Their set consisted of a whopping 17 songs from all four of their studio albums: Take to the Skies (2007), Common Dreads (2009), A Flash Flood of Colour (2012), and The Mindsweep (2015). Although the majority were from their latest release, and rightly so, it was great to hear a couple of the older hits such as “Mothership” and “Juggernauts” thrown into the mix. 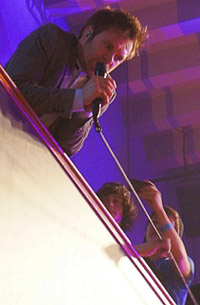 Lee Tobin (Feed the Rhino) wasn’t the only vocalist to submerge himself into the crowd. Mid-way through the set, Rou Reynolds, singer of Enter Shikari, brought a ladder out on to the stage before proceeding to place it against the walls of the venue and clambering up to the balcony towards the seated audience. In the midst of fans seizing the moment to take numerous selfies, Reynolds’ interaction with the crowd was a fantastic lead up to the next song “The Last Garrison”, middle fingers, war cries and all, throughout which he stayed on the balcony singing with the fans who surrounded him.

The energy the entire band expelled throughout never ceased during the entirety of the set, and neither did that of the crowd, as they powered through “Torn Apart”, “Stalemate” and “Anaesthetist”. A part of their set reflected upon the “dulcet and delicate” vocals previously mentioned which appear in The Mindsweep, returning for their encore with “Dear Future Historians…”, an emotionally charged piano ballad. There’s no way they would end their set in such a way though. Of course, Enter Shikari returned to their energetic renditions of “Slipshod” and “Sssnakepit” to see the crowd off: chaos ensued.