The Eugene Mirman Comedy Festival returned, starting with ‘An Evening of Entertainment from People with Black Glasses’.... 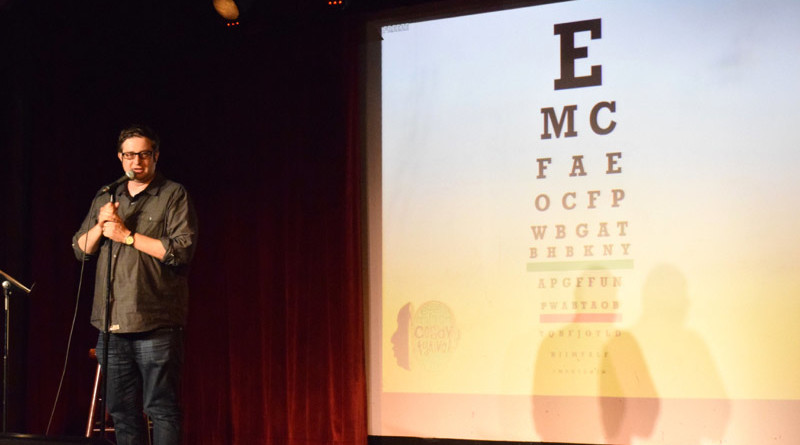 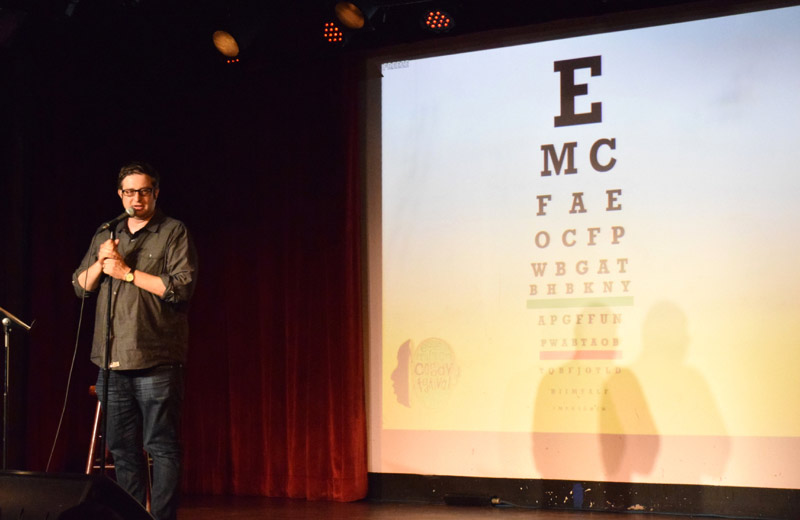 One of the alternative comedy scenes leading lights for a long time, Eugene Mirman brought his comedy festival back to Brooklyn at Bell House (QRO venue review) and Union Hall (QRO venue review), September 18th to 21st. Since last year’s festival, Mirman has gotten married (he showed off his ring, “as proof – as if no one has a fake ring…”). At the end of October he will be releasing his massive nine-volume, seven-LP comedy album, I’m Sorry (You’re Welcome) on Sub Pop Records, which covers everything from “an erotic soundscape for lovebirds and adventurous friends” to ‘Over 45 Minutes of Crying’, voicemail messages, orgasms, ‘Introduction to Spoken Russian’, sound effects, meditation, and even a live recording from Seattle. But before that came his festival, which started on Friday, September 18th with ‘An Evening of Entertainment from People with Black Glasses’, including Mirman himself, Reggie Watts, John Hodgman, Ira Glass, and Janeane Garofalo.

Click here for photos of Eugene Mirman & Friends at Guggenheim on September 25th, 2009 in the QRO Concert Photo Gallery As always, Eugene Mirman himself opened up the evening and later introduced each comic. The recently-married Mirman gave his rules to be a better husband (“Don’t try to turn a high-five into something sexual”), told a story about his 82-year-old father meeting Bobcat Goldthwait (one of the ways his father learned English was by watching Police Academy), messing with an early morning radio DJ during a radio tour, and more. He also did a new voiceover to Johnny Depp’s cologne ad, to make it one for Mirman’s new album (and mock Johnny Depp). Other than the video, Mirman didn’t lean as much on papers and props as he has in the past at his festival, though later did feature some music (that’s what happens when you sign to the label that gave the world Nirvana…). The evening did not have the usual rise in fame, as Janeane Garofalo was the first comic. She had a long but good bit about how she had been using the word ‘dearth’ wrong for decades (being corrected in front of Stanley Tucci), before she brought out a note that she had written to herself back when she was drinking, defending the practice (she has been sober for the twenty-first century). Advice on what to do included child-proofing her house, taking notes when she’s sober enough to do it, and more. She even managed to work in taking on Anne Frank’s belief that everyone is good at heart (“Looking back, she might change her mind…”). It was a very strong set from the veteran comedian, fitting in everything that she had time for. 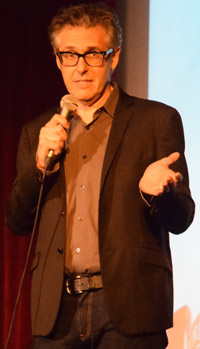 After Mirman riffed on seeing 5 Seconds of Summer and the somehow PG-13 Sixteen Candles with his teenage nieces (including playing some of 5SS’ “She’s Kind of Hot, Though” for the audience), it was time for the king of dark glasses, Ira Glass. This American Life host is actually a regular at the Eugene Mirman Comedy Festival, but this time he was doing a pretty straight stand-up set. He still stuck to long stories, starting with a great one about admitting to a crowd of NPR listeners in Colorado that he has never been hiking – not only were the Rocky Mountain NPR listeners horrified by that fact, but much of this older crowd had had sex while hiking. He then had an even longer, wider-ranging story that took in The Knee Defender™, how many times one can say “dick” on the air, doing one of Stephen Colbert’s practice Late Shows, and miss-bleeping “BLEEP cocksucker.” While Glass was already an icon to this sort of crowd, he still definitely impressed as a stand-up. 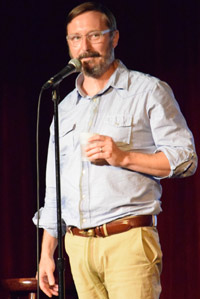 If Glass was shifting into stand-up mode, John Hodgman was shifting into Ira Glass mode, with his own long-form storytelling. He started by getting the crowd to do power poses with him, but most of his set was essentially one long tale about the house in the wilderness of New England that his father gave him. He covered his facial hair (“I’ve entered the weird dad phase of my life”), neo-hobos in Brattleboro, thrift shops not accepting their own products, killing country mice, propane doesn’t appear by magic, and more. His detailed description of going to the dump that he’s not supposed to use delved into Hodgman’s entire psyche, including being a Park Slope resident, subway vs. city bus, the perpetual adolescence of living in the city, and his relationship with his father. It all tied together with his anxiety, including going to an illegal swimming hole with musician Jonathan Coulton and getting high. 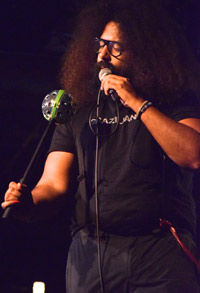 After Mirman introduced him by playing a track from his album, “Enter the Fuckscape”, Reggie Watts came on stage. He was an outlier of the evening, and not just because he didn’t wear black glasses (or was actually black). He mostly talked/mumbled like an old blues storyteller, reading from non-existent papers. There were some very modern topics, like Taylor Swift not being new jazz, becoming Idiocracy, and Charlize Theron’s fatally mistaken route to avoid a rolling donut-shaped spaceship in Prometheus. There was also some random testing with a wand, quoting Hans Christian Anderson in untranslated Danish, the eye chart behind him as a list of sponsors, and a beatbox dismount. The Late Late Show with James Corden bandleader (how come Craig Ferguson never got one?…) contrasted greatly with the storytelling of everyone else, with his absurdist performance.

Eugene Mirman has grown from his stand-up roots, like many stand-up comics – just look at festival alum Jim Gaffigan and his new TVLand show, or John Mulaney and his failed FOX show. In addition to his massive album, he’s a voice on Bob’s Burgers (whose voices & songs were featured the following night), hosts StarTalk Live with astrophysicist Neil deGrasse Tyson (QRO live review – another live taping happened on the Monday for the festival at Beacon Theatre), and more. But thankfully he still delivers with his “silly little festival people seem to enjoy.”