The weather has not been kind in recent weeks to outdoor music fans in New York City.... 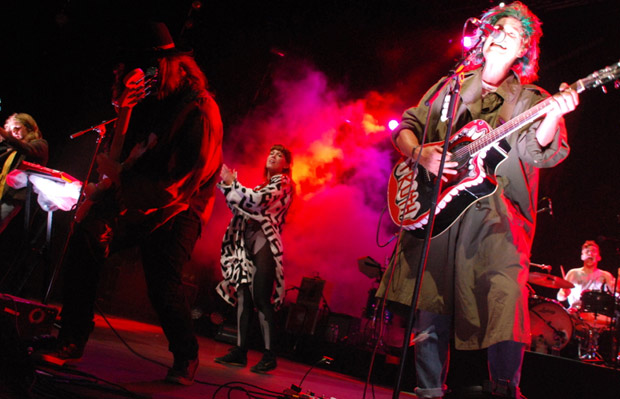 Click here for QRO’s review of Grouplove at Terminal 5 in New York, NY on November 2nd, 2012

The weather has not been kind in recent weeks to outdoor music fans in New York City.  Governors Ball (QRO recap) on Randall’s Island was cursed with torrential rain on Friday, June 7th, forcing an early end to the fest’s first day – and left the festival grounds on the island with acres of shoe-swallowing mud for the next two days.  The Ex-Cult/The Oblivians show at South Street Seaport (QRO venue review) on that same Friday was forced indoors.  And the following Thursday, rain cut short a wonderful performance by Grouplove at Prospect Park Bandshell (QRO venue review) in Brooklyn.

On the still-cursed Thursday the 13th, the weather forced opener Alpine to have to stop and leave the stage, but it let up enough for the group to retake the stage and finish their set later on.  Yet it was still raining when Grouplove bounded out with tons of energy.  Admittedly, they were under the Bandshell, but the fans weren’t – and the crowd matched the band’s energy.  It was especially impressive from those in the front, up against the photo pit barrier, as they were right in the spot where rain collected on the top of the Bandshell would occasionally come down in a sudden bucketful.  And there was actually a pretty good turnout, despite the weather to endure – and the ever-present threat the whole thing would be cancelled. 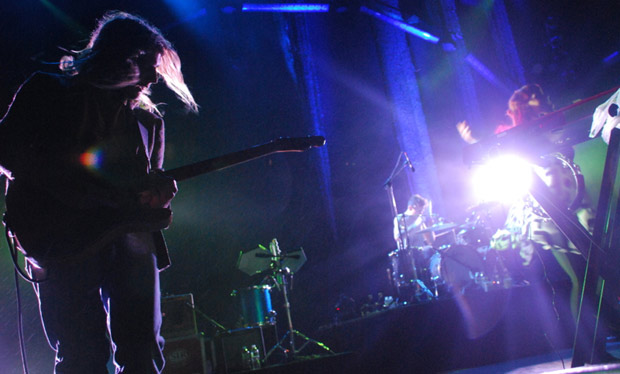 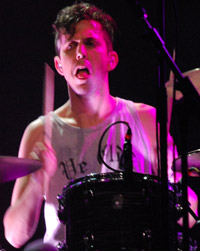 Grouplove likewise aren’t strangers to bad weather in New York, as they referenced early in their set: they had last played NYC right after Hurricane Sandy (QRO review).  Of course, that time they were indoors, at Midtown’s Terminal 5 (QRO venue review) – in the half of Manhattan that still had power.  The set list in Prospect Park had some distinct similarities to the one last fall, starting with great single “Itchin’ On a Photograph”, leaving the other two big singles “Tongue Tied” and “Colours” (QRO single review) to the end. 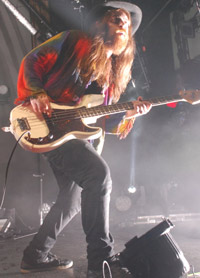 However, this time out Grouplove also had some new songs.  Whereas the show last fall was the conclusion to their long touring off of breakthrough debut full-length Never Trust a Happy Song, in Brooklyn they were previewing songs from their follow-up coming this September, Spreading Rumors.  Right after “Photograph” came the not-yet out “Borderlines and Aliens”, an angular and electro piece that’s also a dance track (with singer/guitarist Christian Zucconi & singer/keyboardist Hannah Hooper hitting the chorus line, “Ari-ari-arigato”).  Four from Happy Song came up next, each particularly upbeat despite the rain – or perhaps even more so because of the rain.  “Lovely Cup” was lovely, “Naked Kids” made an especially strong case for driving to the Los Angeles beach, “Spun” spun, and bassist Sean Gadd taking up vocals for “Chloe” (he also got to do some ‘Guns n’ Roses’ poses in the wind during other songs, with his long hair whipping under his cowboy hat like Slash…).  The band even got some introductions in before “Chloe”, so you’d also know guitarist Andrew Wessen and drummer Ryan Rubin. 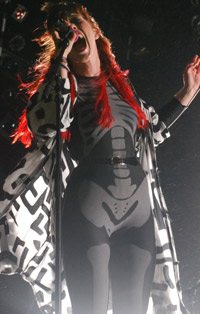 The set did slow down when Grouplove performed the new “Raspberry” (or “Rhaspberry” on the set list) and “Gold Coast”.  Nothing against the slower pieces, but slow + new cost the band the energy that was so needed after so much rain.  Zucconi did get the crowd revved up again by leading a group cheer/scream, and though the subsequent “Close Your Eyes and Count To Ten” is also slow, it worked better, being known from Happy Song – and referencing “All the way to New York City…”  But the real energy return came with the new “Ways To Go”, which had just been released as a single earlier that week.  A great summer track, it shone even in the rain, helped by Hooper’s particularly high energy – and her skeleton leotard that she also wore in it’s awesome video. 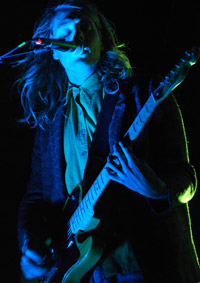 Hooper slowed things down for “Slow”, which does work as the song going into the encore – only there was no encore to be had.  Grouplove fought against the weather-induced early end, even coming out to play acoustic (something they’ve done before with “Cruel and Beautiful World” – QRO video), but it wasn’t the mix of rain & electric instruments that was stopping the show, but rather the wind that was putting the whole crowd at risk; the organizers needed to clear the area.  So unfortunately the band couldn’t play the new “Shark Attack” – which would have been the first they’d ever played it live – nor their great singles “Tongue Tied” and “Colours”.

But here are videos of both songs closing out the Terminal 5 show: 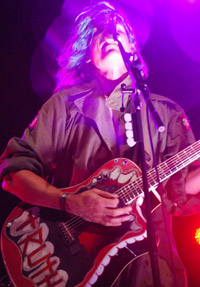 Usually when a New Yorker hears about bad weather, it’s in some far-off land like the Midwest being hit with twisters, or the southwest with fires, or the Gulf with hurricanes, but then came Sandy, and while nothing since has rivaled that “superstorm”, there was the blizzard in February that The Weather Channel decided to name (which was the same night that Passion Pit played Madison Square Garden – QRO review), the downpour at Governors Ball… even the recent Central Park SummerStage performance by Airborne Toxic Event, backed up by Calder Quartet & the LPR Ensemble, saw the skies open up (though thankfully it let up in that case, and last weekend’s two Northside shows in McCarren Park had pitch-perfect sun).  Climate change is hitting even the Big Apple.

But that shouldn’t – and won’t – stop great outdoor shows in The City That Never Sleeps (‘cause there’s just so much to do), like Grouplove in Prospect Park. 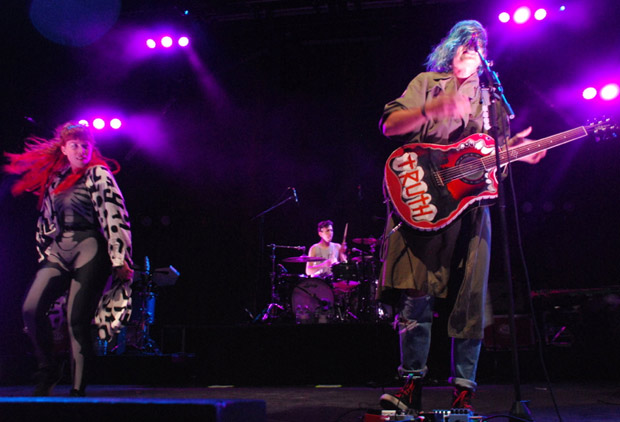