A packed house for a band like GWAR actually turned out to be a rad experience. Sometimes, people just need weird shit in their lives.... 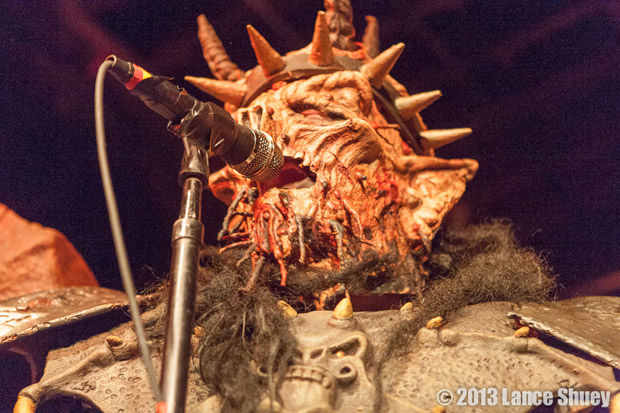 GWAR played Wooly’s in Des Moines on Friday, April 19th.  The band was joined on their ‘Fate or Chaos Tour’ by Wilson and Warbeast.

Wooly’s has been open in Des Moines for just over one year, but already the venue has brought in some solid national acts, including Sleigh Bells (QRO live review), As I Lay Dying, Minus the Bear, among others.  It is big enough to bring in such acts, but still relatively small, retaining the feel of a club (albeit a club that looks like a general store, complete with antique light fixtures and taxidermy animal busts).  The space has been many things over the years, but once housed a Woolworth’s, which explains the decor as homage to the history.

Upon entering the venue, it was clear that the individuals in attendance were not the typical bunch.  The room was filled with a rowdy crew, nearly all of whom were either wearing either GWAR merch or white t-shirts.  It was not yet clear exactly why there were so many plain white tees, but it was obvious there was some meaning to it.  There were too many for a simple coincidence. 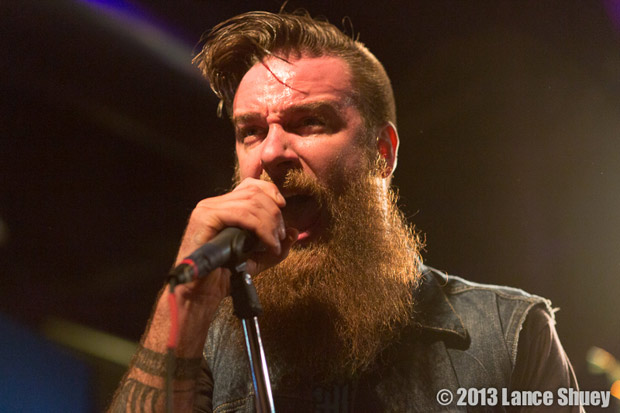 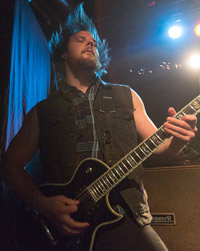 Wilson took the stage first and ripped through straight metal tunes.  They were young, fierce, and heavy.  The crowd became incredibly active during their set – nearly half the room was a pit, and at one point there was even one lucky member of the moshing area who was literally thrown into the bar.  There were a few individuals wearing wrestling onesies taking on anyone who wanted a shot.  All the while, Wilson tore it up.  Halfway through the set, lead singer Chad Nicefield said the band had written a new song earlier in the day, at which time they played “Back In Black” by AC/DC.  The ‘joke’ did not seem to make a ton of sense, but the band nailed the song.  Also, near the end of the set, Nicefield yelled, “This one goes out to all of you wearing white, and it especially goes out to GWAR!”  The white was starting to make more sense. 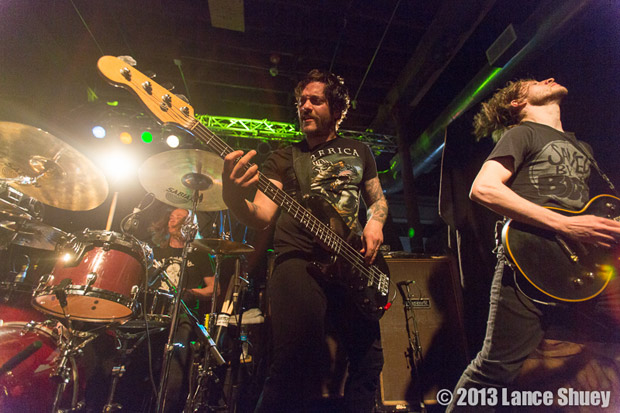 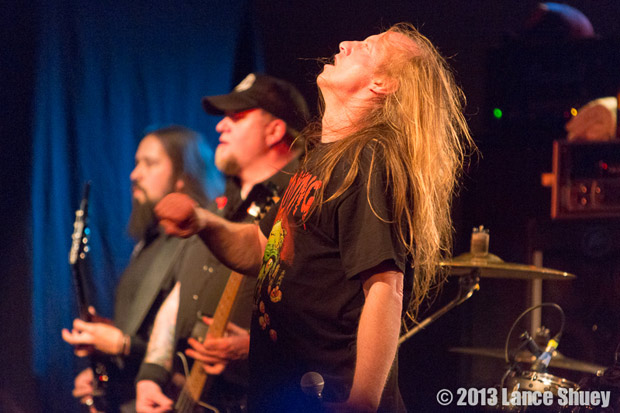 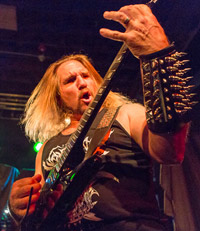 Warbeast had their time on stage next.  They were an older group of guys and their sound consisted of seasoned, soaring thrash metal.  They had a heavy sound and lead singer Bruce Corbitt was an absolute showman.  He had a small ornate microphone stand, and often paced the stage lifting it above his head.  The energy in the crowd did not simmer one bit during Warbeast’s set, and the excitement seemed to nearly bubble over as the metal kept coming through the speakers. 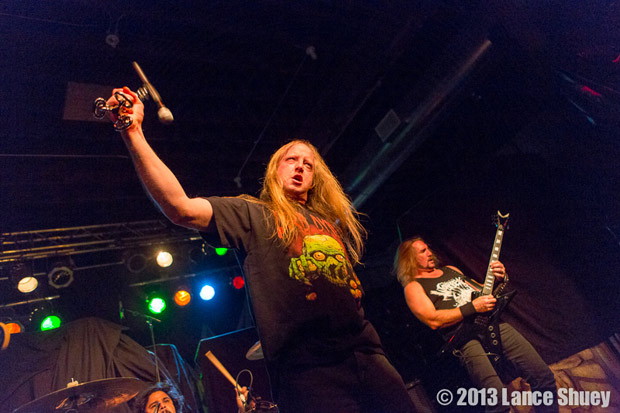 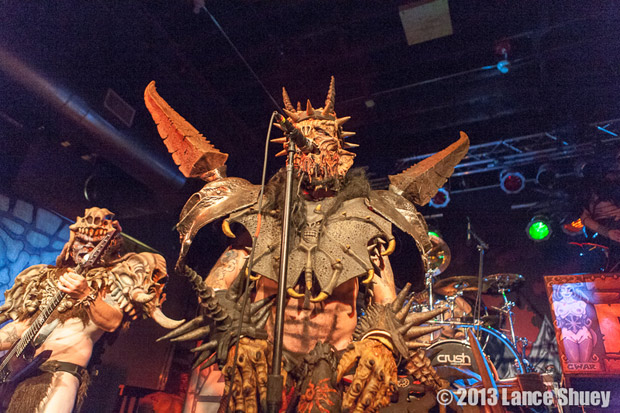 Click here for photos of GWAR from People’s Court in Des Moines, IA on March 27th, 2012 in the QRO Concert Photo Gallery

Click here for photos of GWAR from Marchesa Hall & Theatre in Austin, TX on Novemnber 18th, 2011 in the QRO Concert Photo Gallery 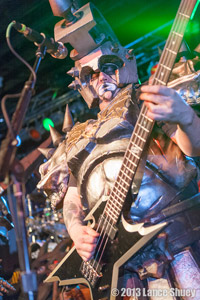 After Warbeast finished playing the excitement only grew.  There was a mountainous background on the stage and some gnarly looking gear, including a massive drum kit hoisted on a platform near the back.  It was an intriguing site.

Something became immediately understood about GWAR – they are a theatrical band, and clearly the people in attendance were ready for a show.  They seemed to know it – there was a collective migration closer to the scene in front of them (one thing to note: Wooly’s stage is not particularly large, so the gear seemed to tower above everything, with the mountains adding to the scope of everything). 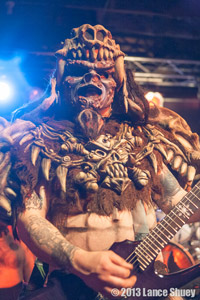 When GWAR emerged (after a message from some intergalactic enemy came over the sound system), they tore apart some sort of large puppet, spewing liquid & slime out into the onlookers.  There was also a beheading.  Everyone went nuts, and GWAR started blasting sludgy metal.

The band was a spectacle (see photos), with costumes that are somewhat difficult to explain.  They are creatures from somewhere else in the universe, and also don some serious armor (seemingly made of skulls/bones) and/or bondage-esque garments.  The costumes do not get in the way – make no mistake about it, they can still shred like crazy. 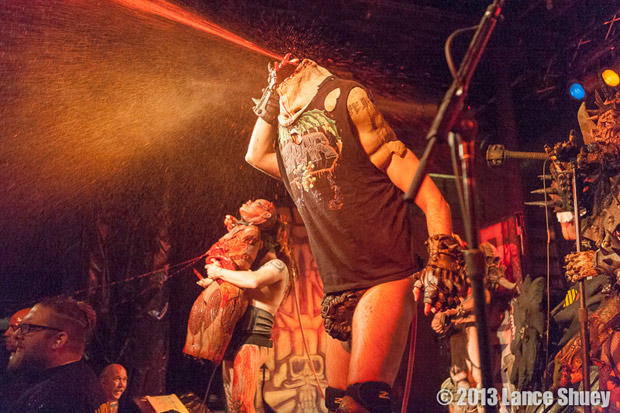 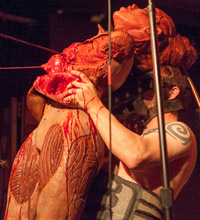 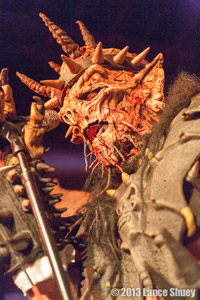 They were not fond of humans, and they spent a lot of time tearing, slicing, and penetrating figures in front of the screaming beings that were cheering them on.  All of this led to the white t-shirts turning red with the fake blood from all the enacted carnage.  It was as much (or more) about the overall show than the music.  There was no shortage of entertainment. 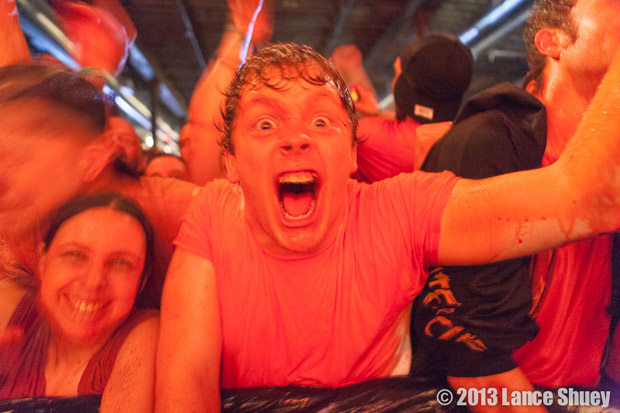 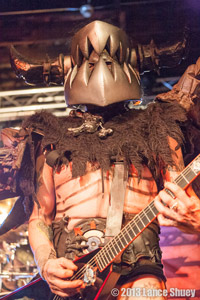 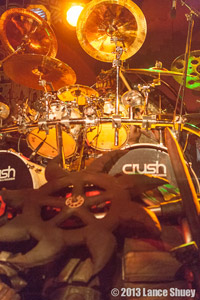 One of the most interesting things about the show was the different conversations and sights that could be heard and seen throughout the venue during the night.  One fan, who was wearing three GWAR shirts (yes, three – he pulled them up to show each one from different tours) was heard explaining how much GWAR meant to him because the music and shows had saved him from substance addiction.  A few other fans had brought their children along.  One child was dressed just like his father in a white t-shirt & white bandana.  Another child was near the front, with noise canceling headphones, playing air drums on his father’s shoulders and throwing up devil horns.

All things considered, a packed house for a band like GWAR actually turned out to be a rad experience.  Sometimes, people just need weird shit in their lives. 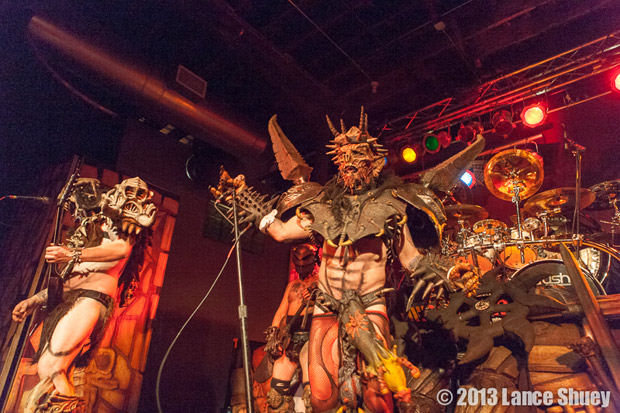