Halestorm, Nothing More, and Wilson came to Wolverhampton Civic Hall on Monday, March 9th. More Click here for photos of Wilson at Wooly’s in Des Moines, IA on April... 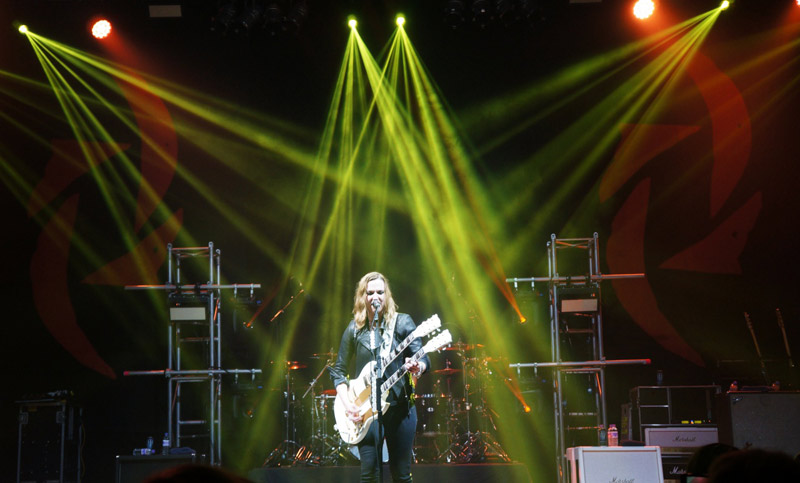 Click here for photos of Wilson at Wooly’s in Des Moines, IA on April 19th, 2013 in the QRO Concert Photo Gallery

Detroit’s Wilson made their U.K. debut at Wolverhampton Civic Hall, bringing the heat to the stage by featuring tracks from their album, Full Blast Fuckery (2013). There seemed to be a little issue with the sound during the start of their set – perhaps the microphone simply couldn’t handle the powerful set of lungs on frontman Chad Nicefield – but with Nicefield’s memorable entrance, dressed in a military jacket whilst banging a drum with the word “FUCKERY” written on the front, the set progressed well and did not disappoint. Their music was a mix of metalcore, with a groove metal twist and they finished with a bang and even performed a rendition of AC/DC’s “Back in Black”. 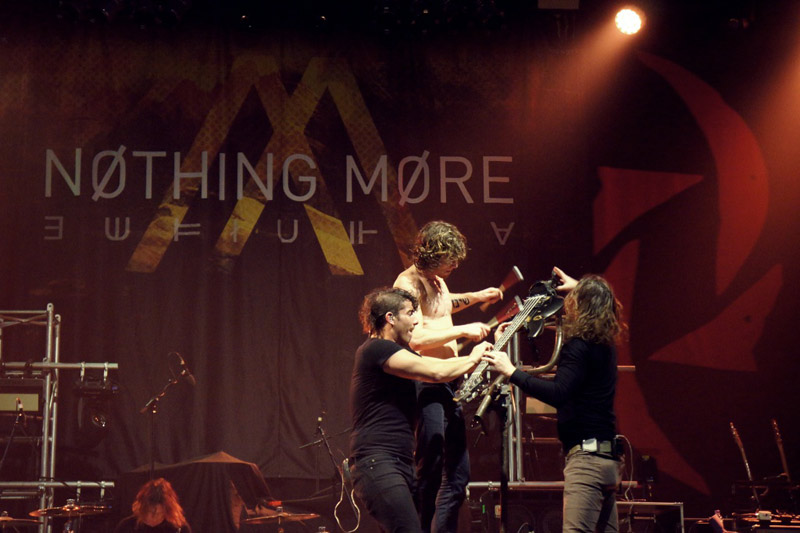 Click here for photos of Nothing More at 2014 River City Rockfest in San Antonio, TX in the QRO Concert Photo Gallery

Following Wilson, penultimate act Nothing More had quite a task ahead of them to keep the pace of the night at full throttle, but they did so with ease. The foursome from Texas unleashed their own unique style of alternative metal on to the crowd, with the majority of their set list containing songs off their self-titled album, Nothing More, which was released in June 2014: “Christ Copyright”, “Mr. MTV”, “First Punch”, “This Is The Time (Ballast)”, and more. Nothing More certainly didn’t shy away from boasting their incredible musical talents throughout their set with staccato riffs and emotive vocals. They also performed a mesmerizing interlude that consisted of a bass guitar suspended on a rotating arm and three of the band members, Jonny Hawkins (vocalist), Daniel Oliver (bassist), and Mark Vollelunga (guitarist), attacking the aforementioned bass with fingers, plectrums, and even drum sticks with incredible speed and dexterity. Their set varied in pace when it came to songs such as “I’ll Be Okay” and “Jenny”, which had slower verses, but powerful and emotional choruses, before ending their set with a storming performance of “Salem (Burn the Witch)”. 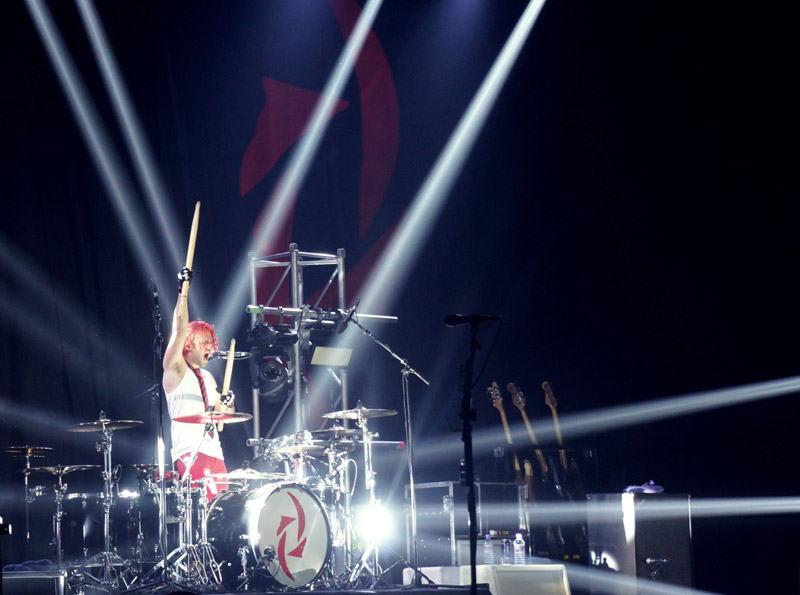 Click here for photos of Halestorm at 2015 LazerFest in Des Moines, IA in the QRO Concert Photo Gallery

Click here for photos of Halestorm at 2013 River City Rockfest in San Antonio, TX in the QRO Concert Photo Gallery

Click here for photos of Halestorm at 2013 LazerFest in Boone, IA in the QRO Concert Photo Gallery

Headliners Halestorm are no strangers when it comes to gigs in the U.K., but each time they have performed they have excelled to new heights. Their set was minimal, with the lights taking full control in highlighting members of the band throughout their performance – not much else was needed for the audience to be fixated on the musical talents of each member of this hard rock band from Pennsylvania. Halestorm’s performance cannot be faulted in the slightest as they moved with ease throughout their 16 track set list (encore included), which consisted of new single “Apocalyptic”, “Mz. Hyde”, “I Get Off”, “Freak Like Me”, “Daughters of Darkness”, and “Love Bites (and So Do I)”. They had the room hooked from the moment they stepped onto the stage to the minute they finished, with what seemed like the entire crowd singing along with the astounding vocals of frontwoman Lzzy Hale, who has become one the loudest female voices of modern rock.

Of course, no Halestorm set is complete without a staggering drum solo from Arejay Hale. With the lights fixed, he powered through his solo with ease, working with both your average and larger than average-sized drum sticks which he threw and twirled – can’t be an easy feat, especially at the speed he was working at.

As well as reveling in the presence of Lzzy and her stunningly powerful vocals, the lucky audience was also treated to some additional new material “I Am The Fire”, “Amen”, and “Mayhem”, songs from their upcoming album Into The Wild Life, due for release next month. If these new songs are anything to go by, their next album is going to be a sensation.