<img src="https://www.qromag.com/wp-content/uploads/2009/08/icfbthewalkmensm.jpg" alt=" " />The new monthly series at the Guggenheim, 'It Came From Brooklyn', kicked off with The Walkmen, High Places & Brooklyn Steppers Marching Band. ... 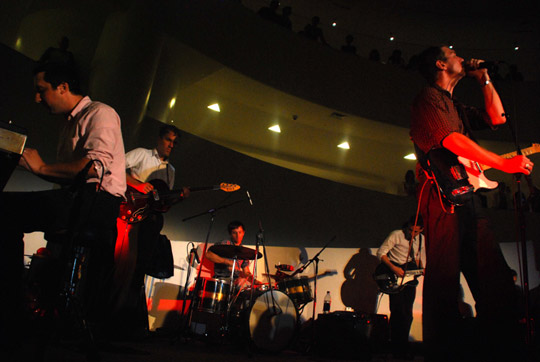 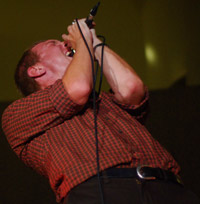 As part of the Guggenheim’s 50th Anniversary celebrations, on Friday, August 14th, New York’s world-famous museum hosted the first in its new monthly ‘It Came From Brooklyn’ concert series.  The series, co-produced by author/filmmaker Sam Brumbaugh (Goodbye, Goodness, Be Here To Love Me: A Film About Townes Van Zandt), is to showcase acts that have emerged – and are emerging – out of that ever-prolific borough.  Kicking things off was the ‘elder statesmen’ of today’s Brooklyn indie-rock scene, The Walkmen, along with High Places and The Brooklyn Steppers Marching Band. 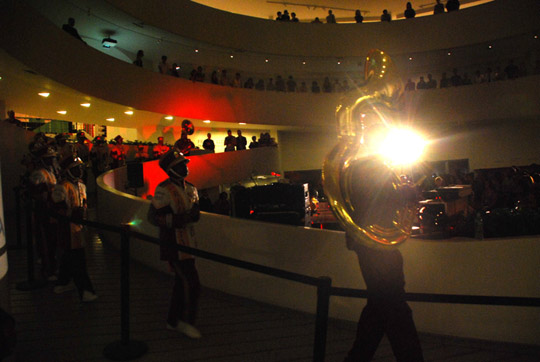 ‘Kicking off’ is certainly right with regards to The Brooklyn Steppers.  Manning (and wo-manning) not just the stage set up in front of the Guggenheim’s first 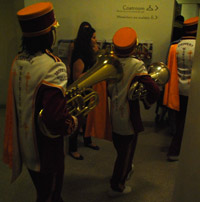 ramp, but also all along that ramp, the umpteen-piece marching band impressed everyone with their perfectly synchronized rhythms.  What’s more, they didn’t stop at the show – marching off, they were still in step; even when they had to stop marching forward, because there was a back-up at the exit, they still marched in place, drummed in place, you name it.  The only problem was that they started & ended so early, but that was because, as The Walkmen’s singer/guitarist Hamilton Leithauser later explained, “We’d wanted The Brooklyn Steppers to join us, but we were told it would be past their bedtime…” 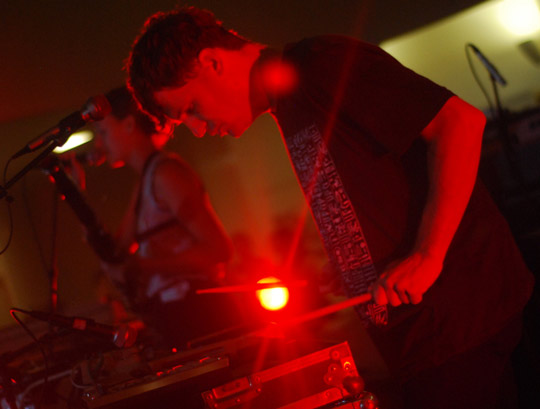 Click here for photos of High Places from this show

From many to just a duo, the experimental electronica of High Places then took the stage.  Rob Barber & Mary Pearson may have since moved to Los Angeles, but they 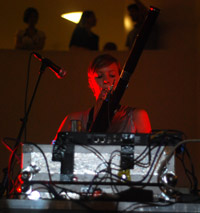 began in Brooklyn’s burgeoning electronic music scene (just check out the week prior’s Brooklyn Electronic Music Festival – QRO recap).  Their atmospheric wash was a bit off an odd fit after the oh-so-rhythmic Steppers, but their artistic nature was a perfect fit for the Guggenheim.  It’s hard to say that the band wouldn’t be more accessible if they weren’t so unusual (like whatever that weird woodwind Pearson was playing…), but the Guggenheim isn’t for run-of-the-mill. 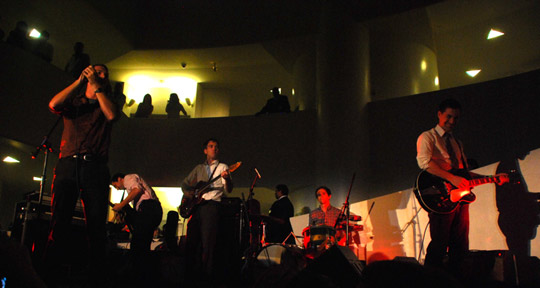 Click here for photos of The Walkmen from this show

Click here for photos of The Walkmen at 2010 Osheaga Music Festival in Montreal, PQ, Canada

Click here for photos of The Walkmen at SXSW 2010 in Austin, TX

Click here for photos of The Walkmen at 2009 Pitchfork Music Festival in Chicago, IL

However, the main event was The Walkmen.  While the five-piece originally made their name thanks to beer-soaked, saloon-style indie-rock such as “The Rat” (QRO video) – this is the band that covered John Lennon & Henry Nilsson’s lost weekend project, Pussycats, from start-to-finish (QRO review) – they’ve since matured to the point that, well, you can see them playing the Guggenheim (they even dress better…).  Last year’s You & Me (QRO review) exemplified that, a sadder, more sobering-up affair, but with increased skill and instrumentation.  Going in, one would have to expect a more artistic Walkmen, and they certainly delivered that, complete with their own horn section.  Yes, it was the kind of Walkmen show where they didn’t play “The Rat” (or even You &

Me’s “The Blue Route” – QRO video), but the band still had their tight-but-raw scratch on “The New Year”, while more downbeat, restrained fare like “Louisiana” echoed much more powerfully off the museum’s walls. 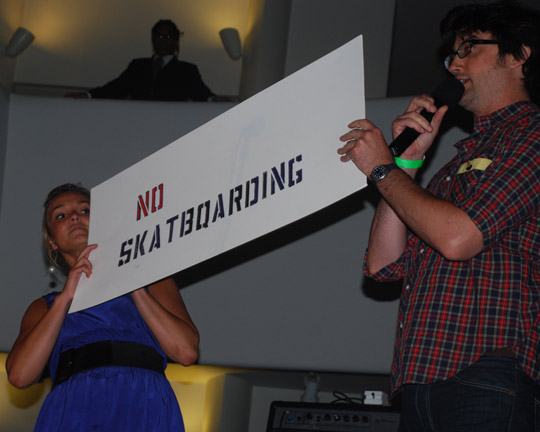 Click here for QRO’s review of The Walkmen at Brooklyn Masonic Temple on December 16th, 2008

Before High Places, comedian Leo Allen (just did a guest-spot on Michael & Michael Have Issues) delivered some rather lame jokes, and before The Walkmen, he returned to unwrap his own piece of art for the 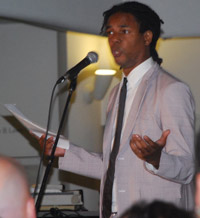 Guggenheim, a ‘No Skateboarding’ sign.  But before Allen’s second appearance, writer Colson Whitehead (The Intuitionist, The New York Times) came on to do a comparison, ‘Who was the better prognosticator: Nostradamus or Walt Whitman?’  While it started off about as random and unnecessary as it sounds, with Whitehead reading a line of prognostication and challenging the audience to guess whether it was Whitman or Nostradamus, the whole thing actually improved as it went on, with Whitehead divining from the words of Nostradamus a prediction of Michael Jackson’s media-circus death (though Whitehead did rely too heavily on passages from either writer where they referenced a ‘Moor’…). 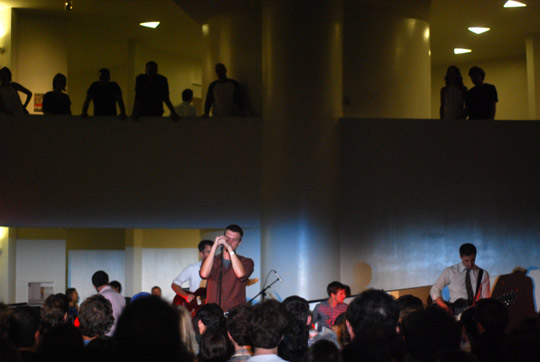 Click here for photos of The Walkmen at Music Hall in Williamsburg in Brooklyn, NY on September 14th, 2007

Click here for photos of The Walkmen at Bowery Ballroom in New York, NY on March 8th, 2007

The crowd at the Guggenheim was an interesting mix: some just straight-up Walkmen fans, some middle-aged & older Guggenheim members, and many the kind of getting-posher thirty-somethings who might not go into Brooklyn to catch an established act like The Walkmen, but would welcome the chance to see them in such a classy place (those folks dressed pretty nice, too).  The Walkmen were also scheduled to play two days later (QRO photos), for free, at Central Park SummerStage (QRO venue review), which probably tilted the crowd towards the young professionals, and away from the younger, cheaper BrooklynVegan set. 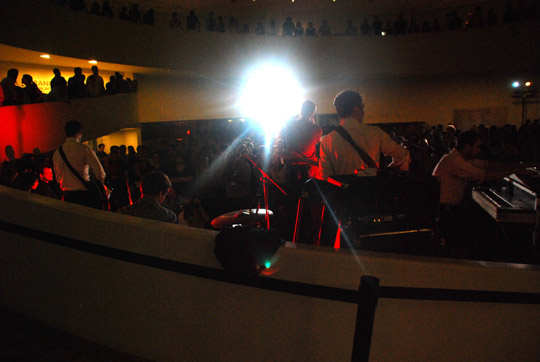 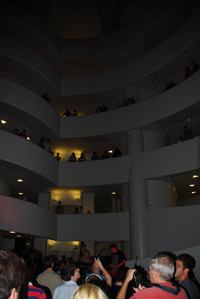 ‘It Came From Brooklyn’ did have one major bonus, namely that it was in the Guggenheim (QRO venue review).  After Brooklyn Steppers, one was able to literally walk behind the stage, along the ramp, practically looking right over the shoulder of Walkmen drummer Matt Barrick (the better to see his funny faces…), though you did get the band’s lighting shining in your face.  But anyone could also walk up that ramp and up the Guggenheim’s signature rotating, rising ramp, all the way to the fourth level (though one couldn’t bring any drinks, even onto the initial ramp from the floor), and look down upon the band & the crowd.  It was really great to see Frank Lloyd Wright’s famed design, known the world over, utilized for ‘It Came From Brooklyn’, giving a unique perspective to any performance. 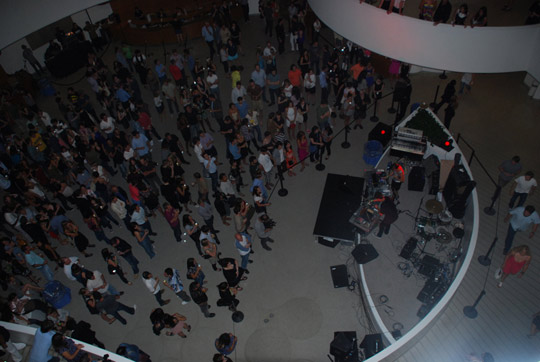 From here, ‘It Came From Brooklyn’ returns on September 25th (QRO concert listing) with the inaugural show by Julian Plenti (QRO album review), a.k.a. the new solo side-project from Paul Banks, singer for even-more-broke-out-of-Brooklyn Interpol (QRO album review).  Marrying high art to indie-rock is never easy, but if any place can do it, it’d definitely be the Guggenheim. 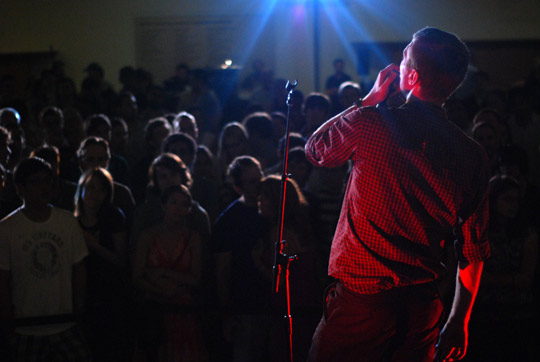