Kevin Smith and Jason Mewes brought toilet humor and troglodyte treacle back to life and reality for their screening tour for 'Jay and Silent Bob Reboot'.... 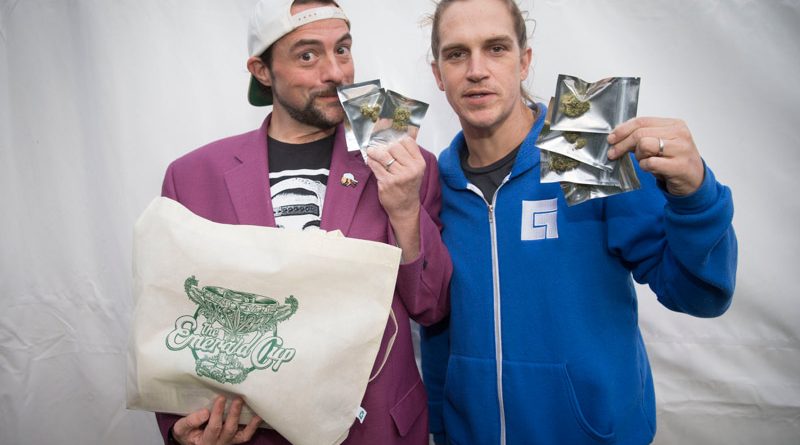 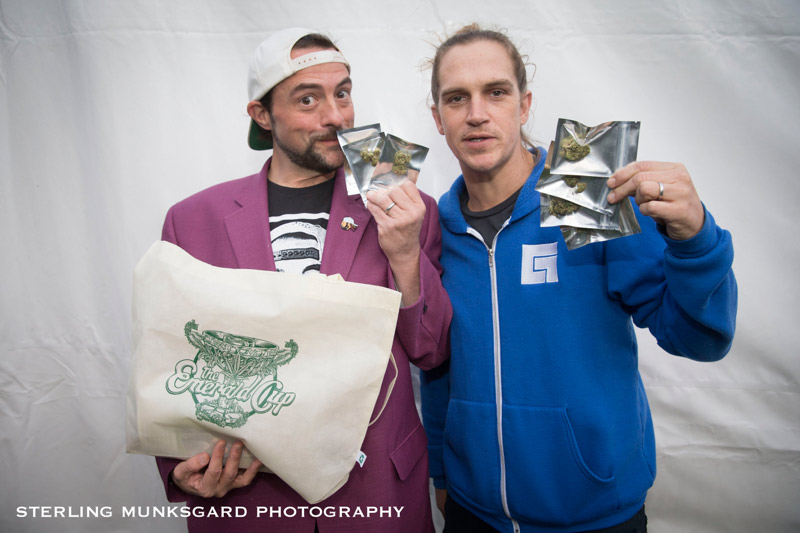 Click here for photos of Jay and Silent Bob from 2018 Emerald Cup in Santa Rosa, CA in the QRO Concert Photo Gallery

Many people are familiar with half a famous quote, often wrongly attributed to Oscar Wilde, which in actuality rightfully belongs to another Oscar entirely – one Oscar Levant, concert pianist and general mordant wit – of which the first half is: “Puns are the lowest form of humor.” The overlooked, far-less-cited and perhaps more instructive portion of that quote goes on, “When you don’t think of it first.” Both of these sarcasm-centric Oscars would undoubtedly have been quite pleased with the Saturday, November 16th showdown of two boys who definitely ‘thought of it first’ as Kevin Smith and Jason Mewes brought toilet humor and troglodyte treacle back to life and reality at Center Stage for the Atlanta stop of their screening tour for Jay and Silent Bob Reboot.

Knowing a chortling treat lay ahead from the first moment of entering the venue upon finding take-home postcards printed with the movie poster and large lettering reading “Snootch to the Rebootch” available as free mementos of the madness, this writer laughed until she almost had abs, and predicts you do the same if your love of crudely drawn verbal sexscapes has not waned in the years since you first drew an anarchy symbol on your Trapper Keeper. There were bare asses. There were positively matchless numbers of curse-laden genitalia jokes. There were in-depth and philosophical discussions of merkins. There was copious weed. All of the usual suspects in the way of unapologetic immaturity motifs and big-time movie stars who have graced Kevin Smith’s most popular movies before are present once again. Smith’s wife and daughter are still there too, helping to make a fool of him as only someone who loves you in the truest sense can do. The self-referencing forever brilliantly skirts the self-indulgent and is always done in the spirit of the best kind of corny laugh. By any metric, Jay and Silent Bob as characters embody a kind of Gen X slacker genius that either fully sates your gargoyle-de-le-gross or causes you to spontaneously remember the worst thing your favorite class clown ever said or did when the teacher’s back was turned.

However, you should see this particular film for the two cameos you could never predict – the movie’s twin themes of a) Hollywood’s sick current circus surrounding shameless rehashing of legacy film ideas, and b) the power and meaning of Dads. Smith’s recent heart attack and subsequent drastic weight loss have clearly left him in a rightfully existential mood, and Mewes has finally gotten fully clean after years of raging heroin abuse, thanks going nearly exclusively to the massive assist provided by his welcome responsibilities as a new father to a toddling daughter of his own. Jay and Silent Bob Reboot centers on a father/daughter relationship and pulls at tendrils of what parents perennially mean at every turn. As Kevin Smith himself put it just before the lights officially dimmed: “You don’t come to a Kevin Smith movie thinking you’re going to leave in tears, but if you don’t after this one, you’re a cold SOB.” And he is not wrong. Never to worry, Smith and Mewes, all wonderfully sincere daddydoms aside, remain very much the filthiest-mouthed hooligans under the bleachers at your junior prom, spitting hilarious profanity like overchewed gum.

Admirably, Jay and Silent Bob never tried to stand in for mature attitudes about some of life’s funniest, yet most intrinsic functions, be they bathroom or bedroom in nature. The most invigorating part of this latest film is the opportunity to witness that, like their compatriot of the scatological, Adam Sandler, no amount of domestic duty or middle-aged miasma has sucked the middle school out of any of these men’s minds. Both Smith and Mewes wandered the crowd throughout the screening and sat of their own volition next to unsuspecting viewers who then looked over to find themselves unwitting but joyful participants in a playfully sadistic selfie snapped by Silent Bob himself.

Beating Family Guy to the penis-pun punch by more than five years, and paving the primetime possibilities three years in advance of all things that once seemed so subversive about South Park, you feel as though Jay and Silent Bob are what happened to the dovetailed spirit of Bill Hicks upon his untimely death the same year Clerks was released. Notably, South Park and Family Guy both had to shroud their respective gutter gaffes in the excusable safety of cartoon. Jay and Silent Bob, with no such convenient hidey hole for their heinous (and seeking none), are the last of the live action bad-but-not-evil comedians of yore and, dare we say, the last that have the stones to be crass but not craven. While indelicate humor and carnally mesmerized men have certainly existed since the dawn of time, it was Smith and Mewes that normalized, and somehow commodified, these attributes without costing themselves any integrity or a female fanbase.

Crucial to note about the continued relevance of Jay and Silent Bob are their birth years, as far as collective societal awareness goes. In the world that birthed Clerks and Mallrats, one still had to hunt for one’s subversion out there in the real. We were all still about five years away from being able to stumble upon graphic imagery by absolute daily happenstance or search out by keyword our most NSFW interests. Smith and Mewes showcased a kind of full-throttle keenness for thumbing their noses at that effort all the way back in 1994 when there was no cozy, backlit screen on which to thumb through the versions of yourself you created just to stow away behind. Jason Mewes, an everlong 14 going on 45, still possesses that rarest of comic skills – the ability to simply enter a room and be funny. His loutish lexicon would be the neon whorehouse carpet in the temple built by John Waters. Throughout the entirety of the Jay and Silent Bob film collection, Smith and Mewes have appeared always to exist engaged in the most vehement, personal and lovingly vicious one-upmanship pissing contest of all masculine time, seventh graders be damned. The manner in which this cutthroat symbiosis is ramped up to fever pitch when they stand across from one another in a live setting can only be described in the same adjective one would pick to talk about how much they clearly mean to one another – illimitable.

Yet, in the face of #MeToo, this brand marches forth with undiminished popularity amongst women of all ages. Your correspondent on the ground here would argue that this has nearly everything to do with the main point of anything related to Jay and Silent Bob – that would be good-natured, fun-loving, no-holds-barred humor – and humor of a kind (because it was born of a time when even debasement was cleaner) that transcends notions of what is and is not allowed on stage today. It may not be pure, but it is undeniably simple, and though Clerks originally depicted them in stark black and white, the great irony is that Jay and Silent Bob represent a high truth about ignoring, overstepping, and/or punching-in-the-face commonly held ideas regarding binaries in humor. The take-home message lies in the remembrance or discovery that shock value used to be a medium comics and artists could work in as with acrylics or oils. The Kevin Smith canon may be the last place we will see that medium workshopped to masterpiece status in the contemporary age because burgeoning attitudes about “thought crime” prevent any real successors from emerging.

Despite prudish detractors, the bottom line continues to be that every guy, no matter how priestly he may wish to portray himself, has, at the very least, thought something along the lines of the cordilleras of coarse dripping from every Smithian syllable – as have most women. If you can attend one of these live screenings, you will receive the added benefit of observing the fulsomely eclectic ranks of those who had no trouble admitting it – and what a marvelously motley mob they are. Jay and Silent Bob fans may rival only their originators for smut and this puts to bed the apologetic worries expressed by Smith before the film screening began that everyone present was “paying too much to see it.”

One has no choice but to marvel at the realization this film forces open – which is that we breathe currently in a state of contaminated cinema wherein it falls to two premium Hollywood outcasts like Smith and Mewes to call arresting attention to the plight of Hollywood, and that only they have the cultural currency (obtained through that selfsame ostracization) to do so with such a staggering cast of Hollywood’s most capital As. Chris Hemsworth, Matt Damon, Ben Affleck, Shannon Elizabeth, Val Kilmer, Jason Lee, Justin Long, Rosario Dawson, Jason Biggs, Craig Robinson and Molly Shannon (to name but a few) certainly have no need to lend their names and images to anything they do not wholly believe in at this stage of their bolide-like careers. Thinking hard about what their clinquant presences in a film like this says, not just about the plight of modern movies, but especially about the artistic stature of Smith and Mewes as auteurs will have you side-eyeing the next big-ticket remake poster you pass at your local theater for sure. Smith has said that this film was made in the spirit of encapsulating his legacy as a man, a filmmaker, and a human in one longform mode so that, he hoped, someone could watch this film knowing nothing else about him at the onset but leave the film knowing everything he stood for.

There are a blimpish lot of self-reverential people out wreaking boredom in the world who live convinced that anything uncouth cannot also be refined, that something oafish should drift toward obsolescence. Just as anyone in fashion will tell you, the combination of high/low elements always results in the most memorable and original outfits. Kevin Smith and Jason Mewes, as an outfit, have made their careers out of cultivating lowbrow royalty, and it is no Pyrrhic victory for them. Attempt to locate even one more artistic cohort that has been as successful at making their vulgarity the very sign and symbol of their aristocracy and I’ll eat my hat. Let this be said to the raised eyebrow retinue: Kevin Smith and Jason Mewes very obviously adore their legion of corybantic fans. They verbally and visibly appreciate their good fortune in being loved by so many for reasons other men might have been reviled or spurned. If intention and gratitude should indeed mete out the pay dossier of a person’s karma and legacy, these two will meet Alanis Morissette with grace when it is their time to go. Maybe you don’t take your kids to see Jay and Silent Bob Reboot if you are not ready for them to nonchalantly refer to the folks at Sbarro’s as “pizza-makin’ f*cks” or free-associate 1980s conversion vans with religious zealots/pedophiles. On the other hand, maybe you do take your kids to see it because, if you can count on nothing else in a Hollywood saturated with corporate nothingness, your young-o’s will emerge with a far funnier (and creatively foul-mouthed) idea of what it means to ‘think of it first.’