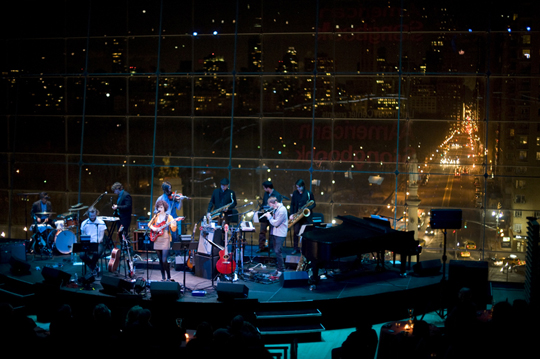 Click here for all of QRO’s coverage of St. Vincent in ‘Spotlight On : St. Vincent

Indie has long done crossovers into more classical styles of music, just as it has into every genre, but the development of the Brooklyn independent music scene into an established presence in recent years has enabled indie to take greater advantage of New York’s classical community.  And there might not be an institution more classical than Lincoln Center.  So as part of Lincoln Center’s ‘American Songbook’ series, on Friday, January 29th at the Allen Room, the institution invited in St. Vincent, one of the indie artists most capable of uniting the two spheres (and the other most capable artists served as guest stars…). 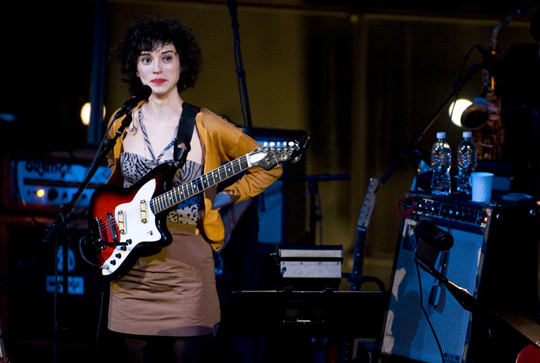 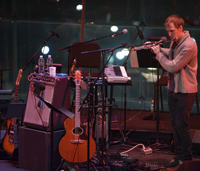 Singer/songwriter Annie Clark (QRO interview), a.k.a. St. Vincent, has long been involved with the more classical side of alternative music, from her participation in massive indie-ensemble The Polyphonic Spree (QRO album review) to her own backing band, which includes flute, horns, and violin.  The ‘cabaret’ feel of her St. Vincent debut, Marry Me (QRO review), evoked the piano nightclubs of occupied Europe (most especially with single “Paris Is Burning”).  She also moved from the somewhat less-than-classical Dallas to Brooklyn, just across the East River from Manhattan, home of Lincoln Center.  So playing as part of the Center’s ‘American Songbook’ series was a natural fit. 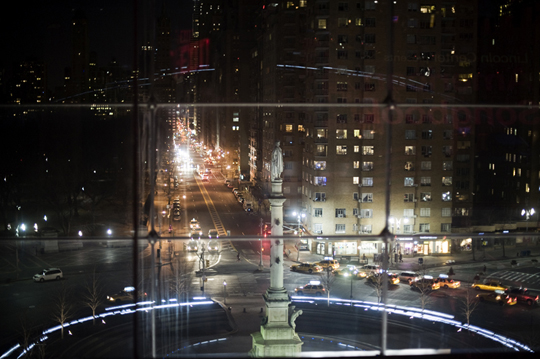 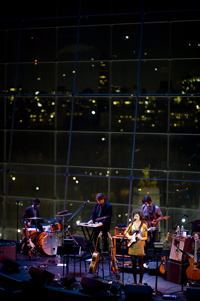 The series is held at Lincoln Center’s Allen Room (QRO venue review), which is actually located not in Lincoln Center proper, but a few blocks south, inside the Time Warner Center on Columbus Circle.  The ‘ultra-classy auditorium’-like venue, on the fifth and sixth floors of the building, looks out onto Central Park West, going north – 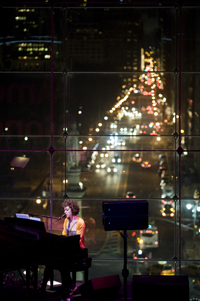 buildings to one side, park to the other, as the backdrop to the stage.  Clark called it “a giant LCD screen behind us, with a really beautiful picture of a city behind us.  I’m not sure what city…”  The lights of the Big Apple, buildings as well as traffic, and the darkness of the park at night, helped make the concert feeling like a real ‘evening’, a real ‘evening out’ (even if only the tables up front were able to have drinks during their show). 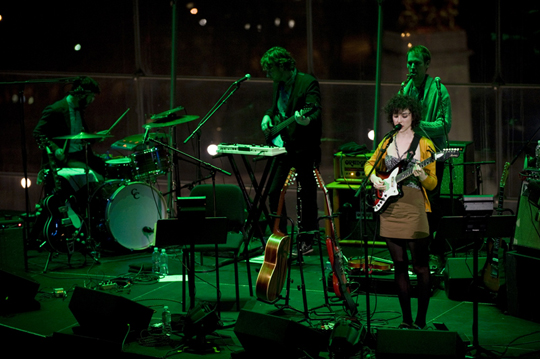 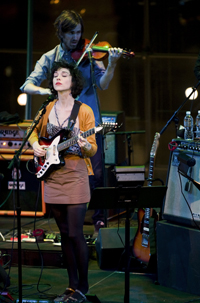 Clark opened with “The Strangers”, the opener to her 2009 sophomore St. Vincent release, Actor (QRO review), and that most recent record dominated the set list, especially the first half.  Actor was actually something of a step away from the more classical sounds of Marry Me, giving Clark more of a chance to “shred” with her guitar, and had been criticized for it.  But at Lincoln Center’s Allen Room, the classical influences were upped for Actor, and the set was the better for it.  Tracks from the record like “The Strangers”, “Save Me From What I Want”, “Black Rainbow” and especially later song “Marrow” exceeded their delivery on their record.  But Clark also didn’t shrink from the shred, letting it out on songs like “Actor Out of Work” and “Your Lips Are Red” (the only piece of the night

from Marry Me, but one of that album’s best) – those expecting a quiet night were going to have to plug their ears (did indeed see at least one woman do that during a few of Clark’s loudest axe-moments).  Maybe best summing it up was the title to the second song of the night, “Just the Same But Brand New”. 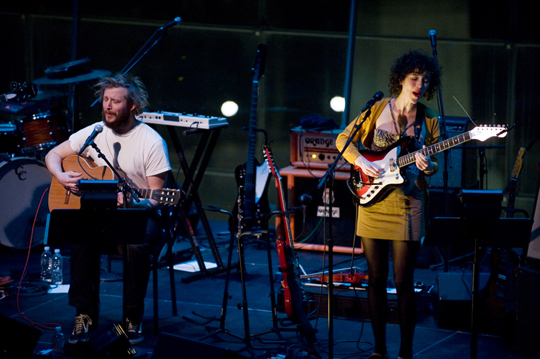 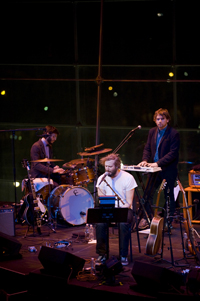 “Just the Same” was followed by Actor stand out “Laughing With a Mouth of Blood”, which featured the first of a “bevy of guest stars”, Justin Vernon, a.k.a. Bon Iver (QRO album review – with whom Clark had performed on the Saturday prior at a special BrooklynVegan-arranged benefit for Haitian relief – QRO event listing).  The alt-folk singer/songwriter has had his own classical touches (though his hair that night looked like he’d just rolled out of bed…), from playing Broadway’s Town Hall (QRO venue review) to just recently having been a part of Merkin Concert Hall’s ‘New York Guitar Festival’ (QRO event listing).  Vernon later returned, this time with Bryce Dessner of The National (QRO live review), the band that has led the way in ‘Brooklyn indie-meets-Manhattan classical’ (including curating two upcoming festivals in the vein, both featuring St. Vincent, Big Ears and Music Now – QRO Festival Guide).  Dessner & Vernon joined Clark on stage for “Roslyn”, a song written by Clark & Vernon (“over the internet – we Skyped the song together…”) that “ended up, sort of randomly, in a teen vampire movie about abstinent teens.”  But whatever you think about the series where “the subtext really is that teens should be abstinent, or they’re going to die, if you really read the novel…”, “Roslyn” is a beautiful song (and the soundtrack that it’s a part of shouldn’t be given short shrift, either – QRO review), and was done beautifully by Clark, et al – though it’s a bit more of a Bon Iver song than a St. Vincent one. 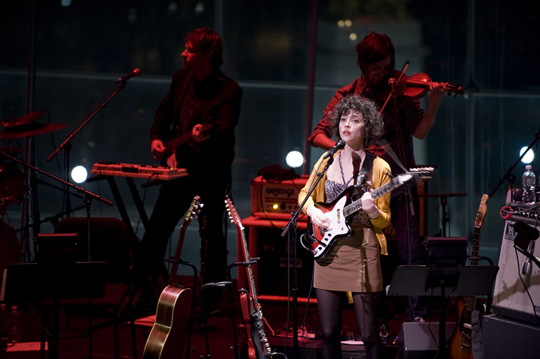 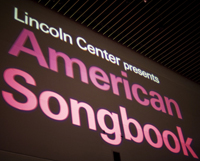 But “Roslyn” was the start of Clark’s expansion at the back half of the evening.  She followed it up with her pick from ‘The American Songbook’ (“Oh wow, that’s a pretty giant collection of songs I could pick – ‘American’ and ‘Song’…”), where she went “a little bit closer to home, to Brooklyn, circa 2006,” to cover “Mistaken For Strangers”, from the album Boxer (QRO review), by that very National – though Dessner didn’t join Clark for the performance, and while she credited the band (“Thank The National…”), she never mentioned that Dessner is in The National (maybe assumed the crowd knew?  Classical & indie scenes can both be very ‘in the know’…).  Clark and her band took the darkly subdued piece and converted it into a female & flute-led orchestral, granding tragedy.  Maybe not as pitch-perfect as the exquisite original, but original and impressive in its own right. 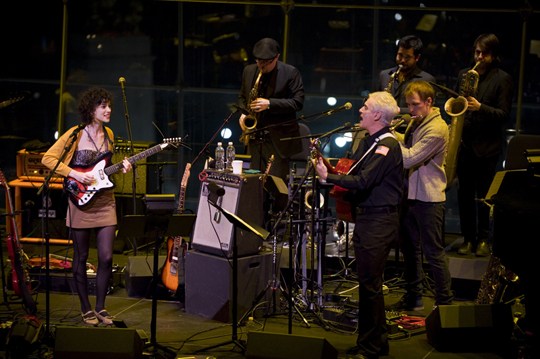 However, it was with the following song where Clark & guests hit their peak, thanks to a little-known New York artist named David Byrne.  The Talking Head has really dived into today’s indie music scene, from working with Dirty Projectors (QRO album review) on a contribution for Dessner’s own charity compilation, Dark Was the Night (QRO review), to opening up the 2009 music season at Prospect Park Bandshell (QRO venue review), and even being seen in the crowd (QRO photo) at shows like Warp Records’ 20th anniversary event (QRO live review) last fall at Terminal 5 (QRO venue review).  Indeed, he has been something of the ‘bridge’ between the classical and indie worlds, thanks to his going-on-thirty years of work in both – when Clark announced, “There is another super-radical guest for tonight,” indie & classical minds may have guessed that it was going to be David Byrne (or just noticed 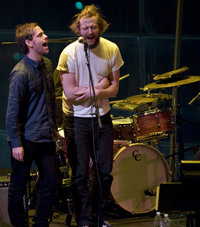 him off-stage, in the dark but with bright-white hair), but that didn’t make his appearance any less sweet. 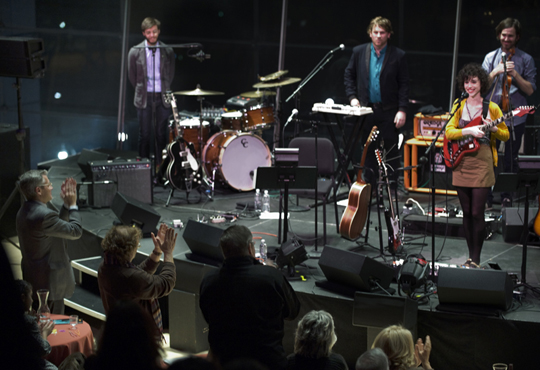 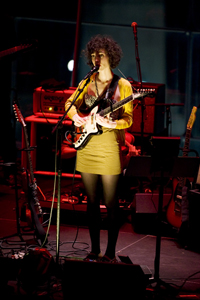 Clark has always had great banter and chatter with the crowd (QRO live review), and while the classy setting did dim that somewhat, she still shined through with comments like those about the view, Twilight: New Moon, ‘American Songbook’, and more.  After Clark mentioned that it was a full moon, someone cheered, with which Clark responded, “Yes, applause for the earth, and the planets…  Yes, I’m in full support of that.”  And before “Your Lips Are Red”, after announcing it was their last song and receiving ‘awws’ from the crowd, she mock-confessed, “That’s a lie, let’s be honest.  Let’s all just be complicit in the lie, for now…”

And St. Vincent did return, for “The Party”, before bidding adieu.  The whole set was perfectly timed, at a little over the seventy-five minutes that the program had informed everyone of beforehand (QRO photoQRO review) – just long enough so you felt like you got a whole experience, but not so long that you were squirming in your chair (other than the short encore break, there was “no intermission” – something else the program let everyone know).  St. Vincent & friends brought indie to classical, Lincoln Center brought classical to indie, for a holy evening. 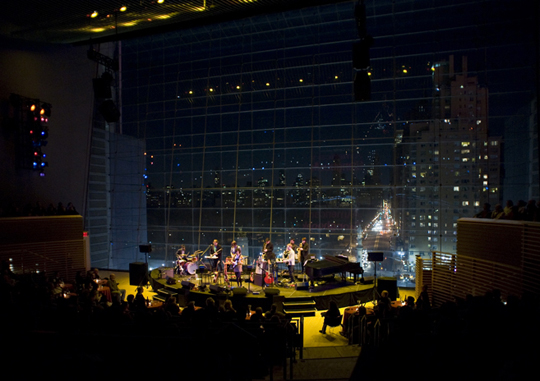