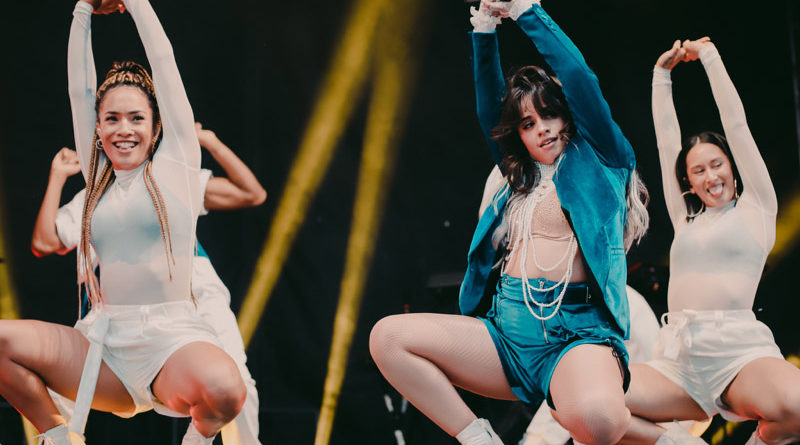 Ever since Lollapalooza expanded to four days in 2015 for its twenty-fifth anniversary (QRO recap), Thursday has usually been the lightest of the quartet, not even weekend-adjacent. But this edition seemed more evenly balanced, day-to-day, with opening acts you’ve heard about & been meaning to see, and big headliners.

Opening the main Grant Park Stage was Slaves. A guitar/drums punk duo from the U.K., they are different from other guitar/drums duos that were big years ago in that their drummer is the singer (shades of the late Grant Hart – QRO interview). It was tough to fill the large stage at 1:00 PM, but they did their best – “Wakey, wakey!” In a great working class Brit accent (that was totally reminiscent of the Spirit of ’77), singer/drummer Isaac Holman asked everyone to hug the person next to them – including security, “You’re not too macho for a hug,” then asking the crowd to cheer for security (not usually a punk band’s friend). When the folks up front were getting crushed, he asked everyone to take a step back. When his hi-hat wasn’t working, he sang, “Fuck the hi-hat!” Still not sure about two white British guys who named their band “Slaves,” but they definitely acquitted themselves well at this American stop. 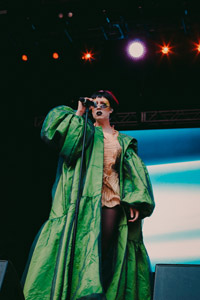 One of the hidden gems of Lollapalooza is the BMI Stage. Much smaller than the other stages, in the middle of the festival grounds with rare shade, it hosts small up-and-coming acts promoted by the premiere musical rights management, BMI. While you’ve likely never heard of any of the artists playing it, there’s a good chance that at least a few will blow up and play a bigger stage their next time at Lolla. Sisters Larkin Poe (QRO photos at BMI SXSW party) brought their twangy rock to the stage on Thursday – including strapped slide guitar.  Meanwhile, on the also shaded (but larger) American Eagle side stage, Allie X delivered. 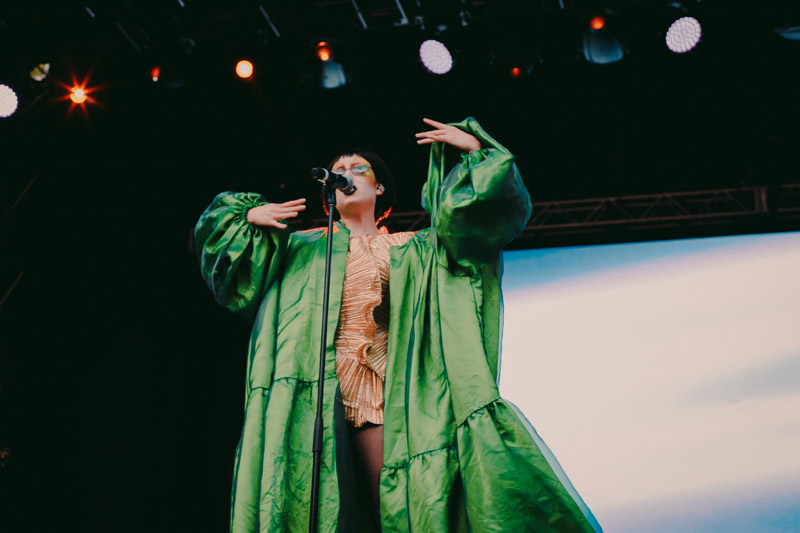 The main Grant Park Stage at Lollapalooza will always have big acts playing the big space way too early in the day, when the sun is beating down and sweat is pouring down, artists that are used to playing nightclubs and such. Stars are better seen in the evening (QRO live review), but the Montreal band as still lovely in the day (and it’s not like they were under Fluorescent Light – QRO review). Indeed, they were great for both dancing in the sun and lying in the shade. 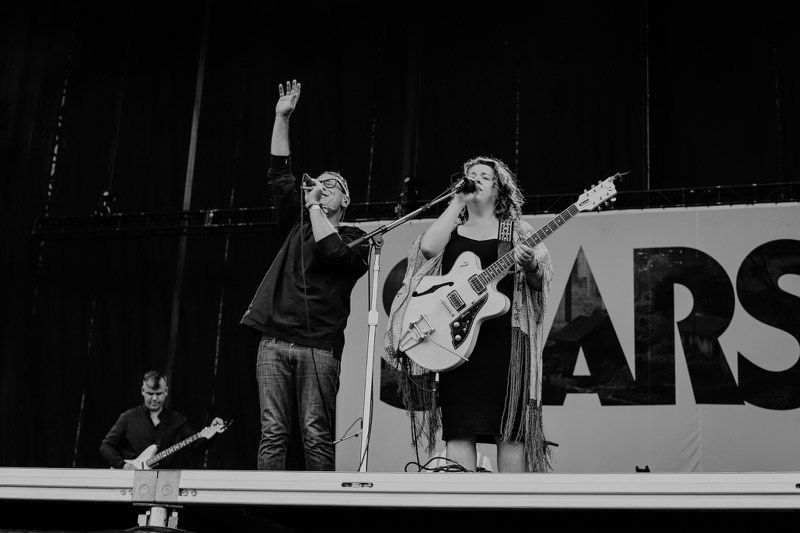 Also special points for Stars singer Torquil Campbell saying, “Give it up for these hard-working signers, who know all the words!” Lollapalooza has live sign language interpreters for a number of the performances, who don’t just sign the words, but move to the songs as well, very visible in their perches at the side of the stage, slightly below. And when Campbell thanked their translator, she signed that as well. 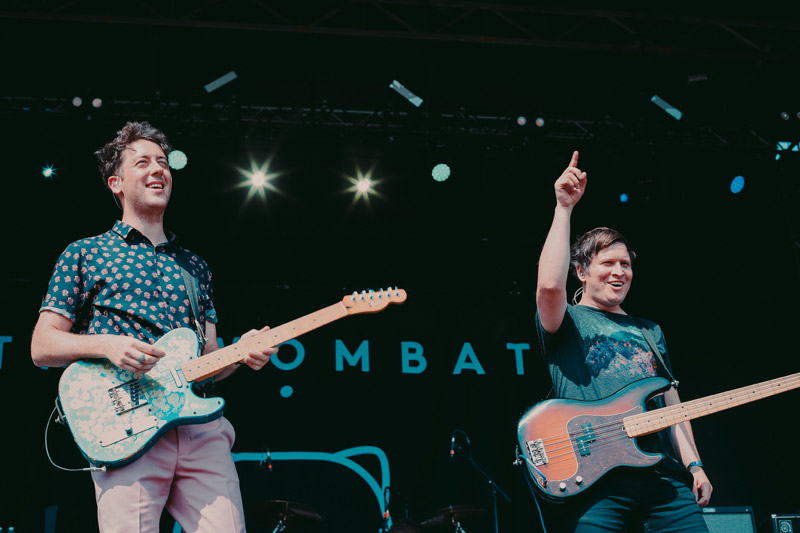 The Grant Park Stage-Lake Shore Stage (right opposite each other) alternating sets on Thursday delivered some great indie-dance acts. After Stars, over at Lake Shore were The Wombats. The British band has never had the following in America that they have at home (kind of like Canadian Stars), but pulled it off in Chicago.

Following them back on the Grant Park Stage was Scotland’s Franz Ferdinand. Yes, they’re many years removed from breakthrough “Take Me Out”, and yes, their sound hasn’t evolved much in the following years – but it’s a great sound. And singer/guitarist Alex Kapranos is still a wonderful frontman (including pointing out the Scottish flag in the crowd). While your correspondent’s photographer probably wishes that they’d done “Glimpse of Love”, and it’s line of, “Love is gonna come as a photographer,” while he was in the photo pit, they did do the track from this year’s Always Ascending (QRO review). And instead of closing with “Take Me Out”, that was second-to-last; instead, their set ended with an extended version of another early hit of theirs, “This Fire”. 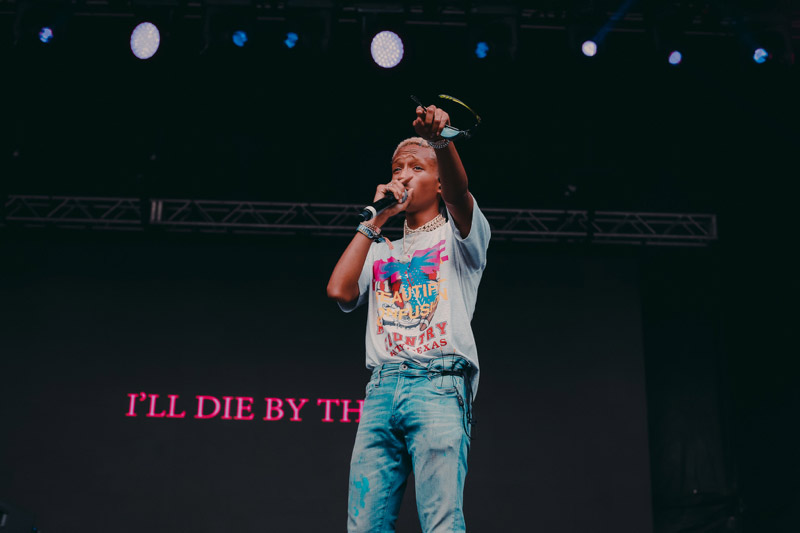 Over at the tree-shaded American Eagle side stage was Jaden Smith, a.k.a. Will & Jada’s son and Willow’s brother. Whatever you think of Hollywood royalty doing music (gotta be better than After Earth…), he garnered a big crowd (including fans climbing the trees overlooking), and invited guest star Lido on stage. 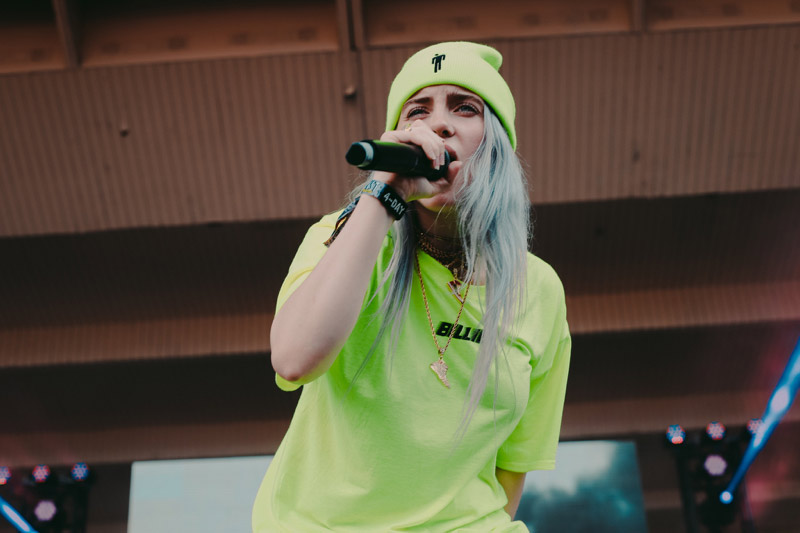 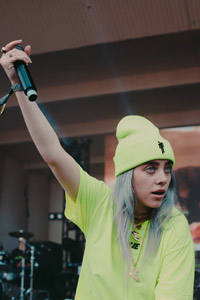 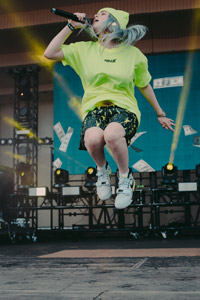 Meanwhile, Billie Eilish had all the teenage girls screaming their love for the fast-rising star at the Tito’s Handmade Vodka Stage. Coming off her packed House of Blues show the night prior (QRO photos), she was almost like Daenerys Targaryen, if Emilia Clarke was a rhyming pop star.  Indeed, if the schedule hadn’t been set so early (always a double-edged sword with Lollapalooza), she would have been put on one of the biggest stages to accommodate her many fans. 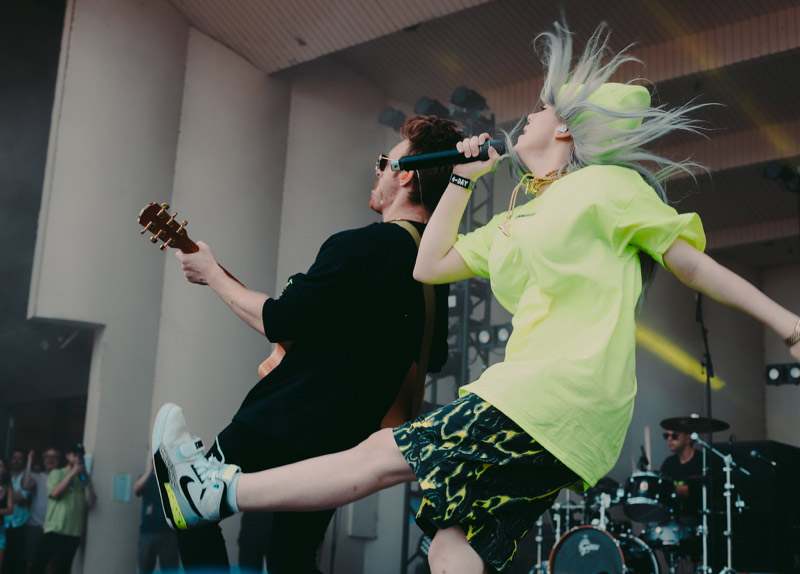 The indie-dance line-up continued on the south end of Lollapalooza with CHVRCHES at the Grant Park Stage. Big, powerful electro-dance, from the small package of Lauren Mayberry, came to the big, excited crowd. Notable was that their audience was roughly equal, male-to-female, pointing to the band’s wide, dedicated appeal. Matt Berninger reprised his guest appearance on “My Enemy” from this year’s Love Is Dead (QRO review) – his band The National were to headline the next day, and play an intimate show at The Metro that night (QRO photos). 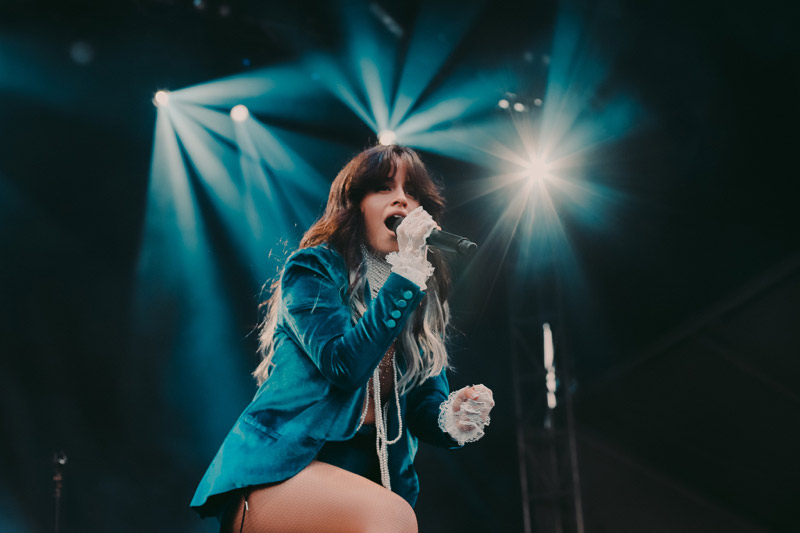 Going to the modern Latin pop girl power at the Lake Shore Stage was Camilla Cabello. “I love writing songs about love. I’m probably the most emo person at this festival – my mom is here, so second-most.” And her songs of love aren’t just about romance, “Who’s here with a group of friends?” – and a lot of ladies were. 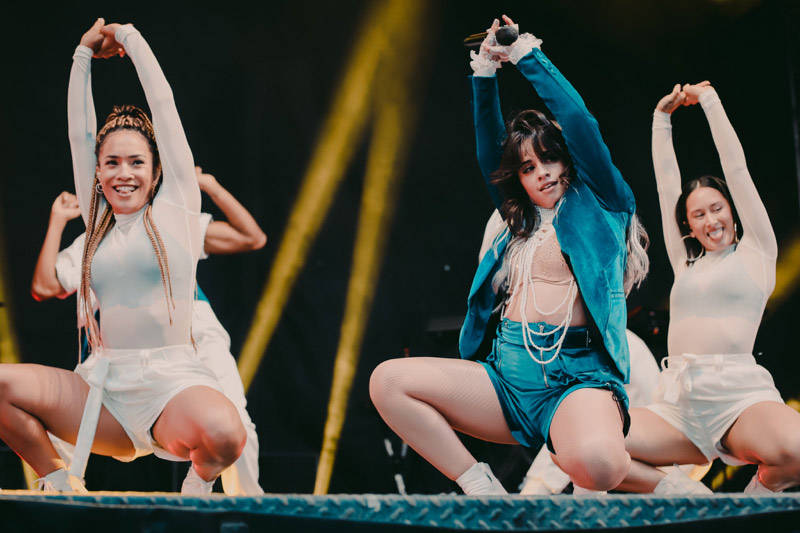 Of course it was a mad house at the Bud Light Stage for headliner Travis Scott; three years ago at Lollapalooza (QRO recap) he called upon fans to jump the barricade and storm the stage, cutting his set off after only a few minutes, and even getting him arrested for disorderly conduct. But he’s Kylie Jenner’s man, so he could return (and she was there as well, fresh off the February birth of their child), with new album Astroworld dropping only a few hours later. And this time, he stopped his set when fans made it known that someone in the crowd needed medical attention. Later, a fan made his way to the front and convinced Scott to let him make a marriage proposal, on stage (she said yes). In contrast, Scott was an hour late to his set the next night at Montreal’s Osheaga, thanks to customs.

Meanwhile, Arctic Monkeys also returned (QRO photos at Lollapalooza ’14) to headline the Grant Park Stage. It was a different affair at this end of the park, including frontman Alex Turner lying down on stage for a moment.  And, despite playing the bigger of the two main stages, they seemed to have the smaller headline crowd of the day.