Lollapalooza '18 delivered all over the musical map on Friday.... 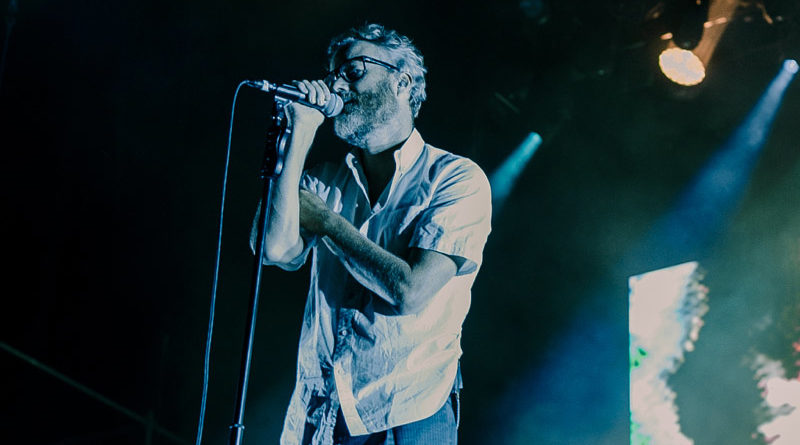 After the scorcher that was the prior day, Friday at Lollapalooza was still hot, but not quite as hot, and a little less humid. It really made for a more enjoyable event – hopefully global warming doesn’t kill the outdoor music festival (or move them all to Canada…). 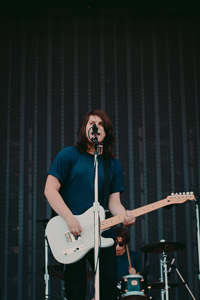 Friday had a whole bunch of singer/songwriters that you’ve been meaning to see. There was Matt Maeson opening the Tito’s Handmade Vodka Stage (hopefully he stuck around until Sunday to see his favorite artist, Manchester Orchestra). Melbourne’s Alex Lahey has been impressing people around the world with her debut, Love You Like a Brother (QRO review), and after impressing folks at The Metro the prior night, opening for The National (see below) at a Lollapalooza after-show (QRO photos), she opened the big Grant Park Stage.

Lahey joked that she wanted to honor The Simpsons’ Hullabalooza episode (which mocked the nineties touring version of Lollapalooza, in still one of the ultra-venerable show’s best episodes ever) by firing a cannon into her belly, but couldn’t get Peter Frampton’s inflatable pig, so instead covered Avril Lavigne’s “Complicated” (though no nineties Lollapalooza act would cover a pop star). Hullabalooza act Smashing Pumpkins had (three-quarters) reunited the night before at Madison Square Garden (QRO photos).

Over at the Lake Shore Stage, Lewis Capaldi delivered emotional white boy wrought that girls love and hipsters roll their eyes at. Following back at the Grant Park Stage was Dermot Kennedy, and his strong, powerful voice. He’s an artist that you missed and wished that you hadn’t, or your friend caught and told you all about.

Lake Shore had Bebe Rexha and crowd singing along to opener “Me, Myself & I”, though it was unfortunate that she was on the same time as Tito’s Lizzo, who covered TLC’s ultra-classic “No Scrubs”, along with her own pieces such as “Fitness”, “Scuse Me”, and “Good As Hell”, backed up her Big Grrrls dancers and DJ Sophia Erris. Your correspondent went to the much more intimate Bud Light Dive Bar Stage, like he did the weekend prior at Panorama (QRO recap), this time for Welshly Arms. When their guitar went down, the group rolled with it and played “Sanctuary” with just piano. Their blues-y sound fit well with the stage (which was one of the few at Lollapalooza with shade – and the only one with seats). And yes, they joked about the sponsor, because that was kind of unavoidable, noting that they had buckets of the beer on stage – but still wanted more.

Over at the small BMI Stage, one could see why BMI thinks that Australia’s Chase Atlantic is going to be big, doing electro-rock that is so hot right now. But they also seemed like the kind of electro-rock would-be-stars that you can’t stand. Bonus points, though, for having a saxophone [and your correspondent likes any act with the name ‘Chase’…] 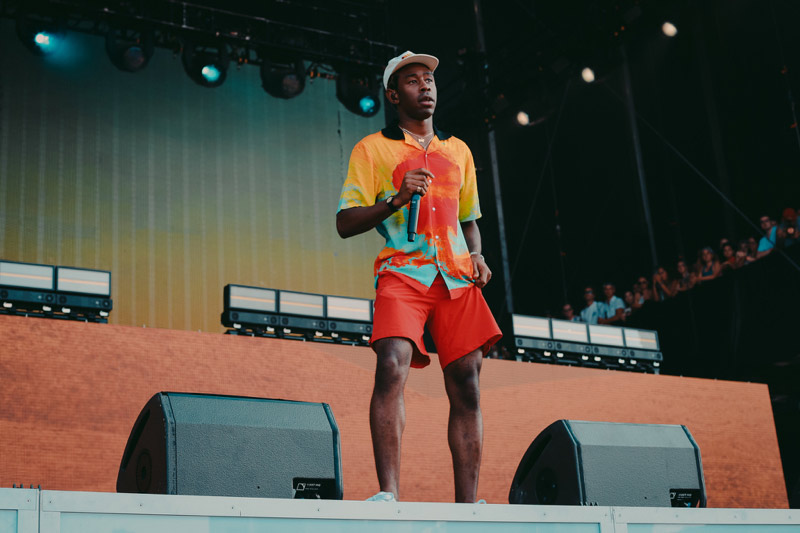 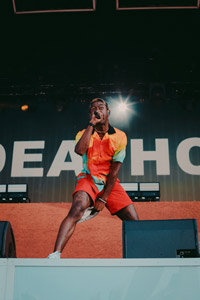 Odd Future’s Tyler, the Creator became infamous for fronting the act’s wild, anarchic shows – but that was years ago by this point (QRO photos at a 2011 festival). Is he still a big draw? Yes, definitely, by the giant crowd for him at the Grant Park Stage. And he still can produce well-crafted, incisive rhymes (and still dresses like a kid…), though he was also giving party advice, such as instructing the many different mosh pits to coalesce, and closed with a sing-along to “See You Again”. Plus your correspondent’s photographer brushed shoulders with the man during Post Malone’s set, and nearly fainted. 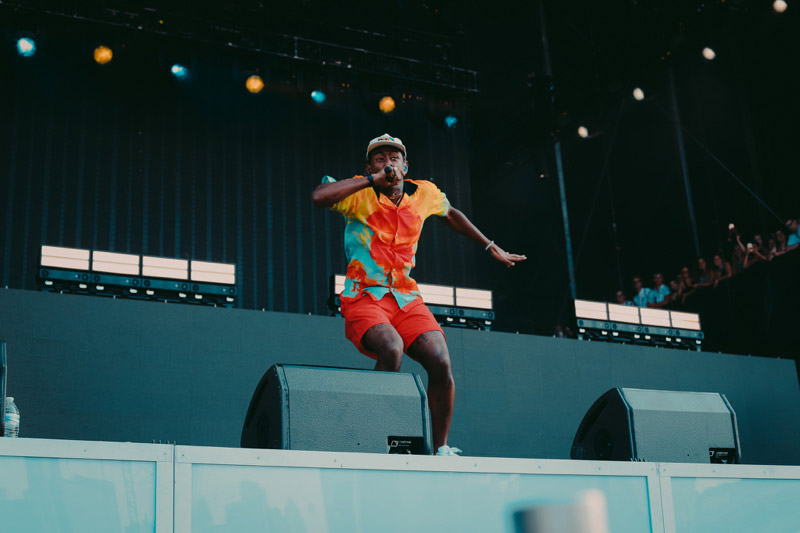 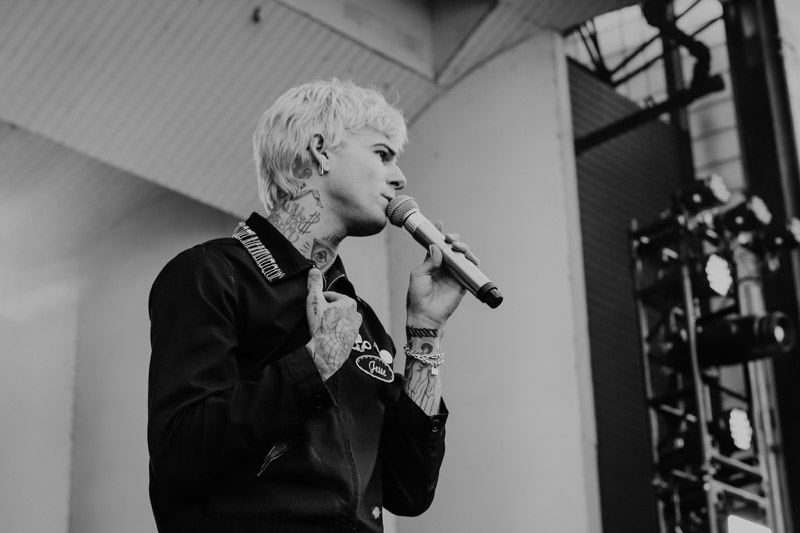 While The Neighbourhood attempted to throw back by demanding all photos of their Tito’s Stage set be in black & white, throwing way back was Greta Van Fleet at the American Eagle Stage. After cancelling New York’s Panorama the weekend prior (QRO recap), they and their seventies psych-rock channeling came in force to Lollapalooza. They do sound a lot like Led Zeppelin, even dress like them. But if they aren’t moving music forward, they are at least bringing this sound to a new young audience that knows way less about rock ‘n’ roll.

Back over at the Grant Park Stage, Walk the Moon brought a big, upbeat electro-party. Even if their recorded material has declined, they’re still great live – and they still wear face paint. Of course they closed with their breakthrough ‘song of the summer’ (of 2010…), “Anna Sun”. 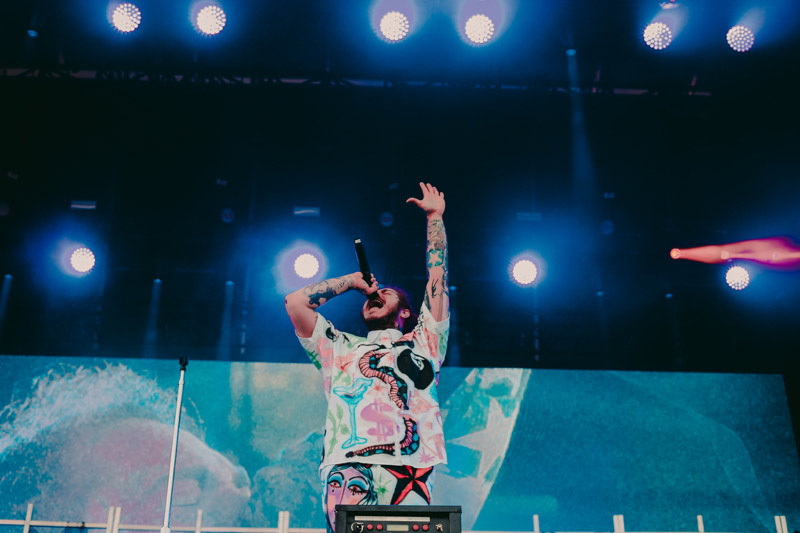 Then there was Post Malone at the Bud Light Stage. Earlier in the day there, Parquet Courts singer A. Savage joked, “I’ve longed for that day when I’d be playing for confused, slightly disgruntled Post Malone fans,” referring to the Malone lovers (undoubtedly white guys with braids) who had camped out for a good spot at the stage early. Lollapalooza always has those very current hits that you love or hate – interestingly, they usually don’t headline, no matter how hot they are at the time. 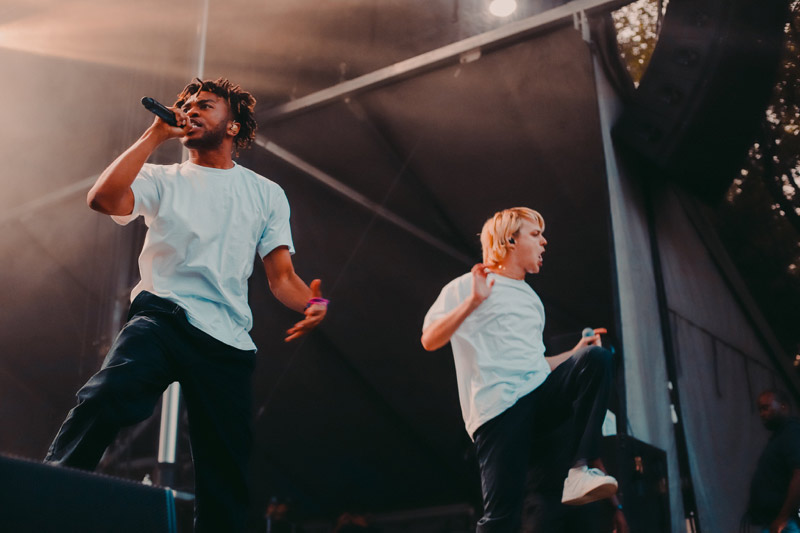 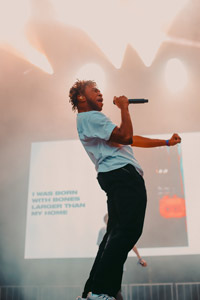 Another act that’s very big right now is the hip-hop/boy band collective Brockhampton, who hit the side American Eagle stage, despite being well big enough for a main one. The crowd was massive for the smaller, tree-dotted spot. The group is only months removed from having to kick out member Ameer Vann for accusations of sexual misconduct, and subsequent hiatus (QRO photos at a festival after kicking him out, before the hiatus), yet it hasn’t dimmed interest in them (though has delayed their much-waited-for debut full-length, Team Effort). 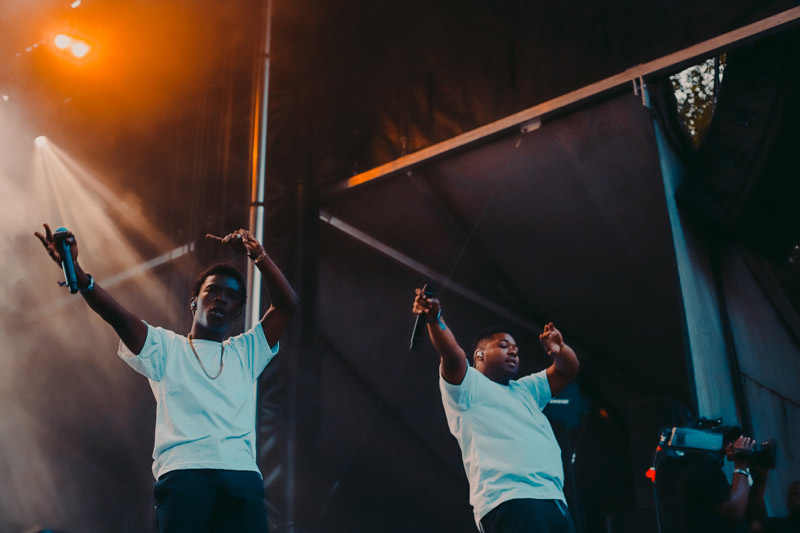 At 8:30 PM, Lollapalooza-goers faced a headliner choice: Bruno Mars vs. The National vs. Dillon Francis. Of course Bruno Mars won out, with an ultra-giant crowd at the Grant Park Stage. He’s a major crossover star, in that his appeal has crossed over into almost every group of people (thus all of his Grammy wins this year), which at Lollapalooza made for a crowd that very definitely included both teens and their parents (particularly moms). He delivered on what people came there for (including, yes, “Uptown Funk”), an easily enjoyable and accessible set, complete with fireworks.

The kind of people who go to Lollapalooza for the EDM Perry’s Tent closed it out with Dillon Francis, and you can judge them however you will (Francis has earned points for playing James Van Der Beek-as-stupid-Diplo’s even stupider best friend on VICELAND’s What Would Diplo Do?). 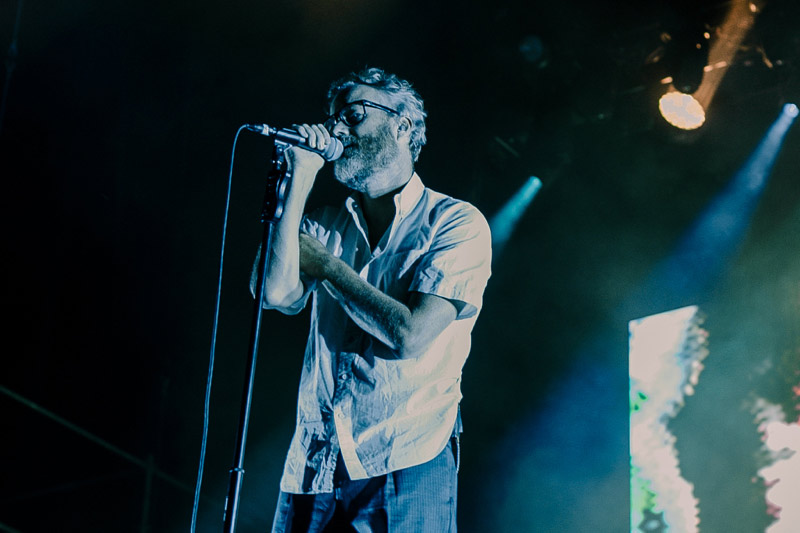 But if you didn’t want the mainstream-est of popular music at your Lollapalooza, you went to the Bud Light Stage for The National. And there weren’t that many of you – for a headlining set at one of the two main stages, the crowd wasn’t exactly massive. But that made it a special headline set, one where you weren’t stuck in a thronging mass and too tired to enjoy the act that you’d actually paid the big Lollapalooza bucks for.

Singer Matt Berninger was in a great mood, making numerous jokes and going into the crowd. He dedicated “Afraid of Everyone” to Mark Zuckerberg, though even he didn’t know why. “Bloodbuzz Ohio”, on the other hand, was specifically sent out to Aftab Pureval, who’s running to topple a Republican Congressman in their native Cincinnati. The group has gotten more political in recent years (but who hasn’t?), and Berninger told the Chicago crowd to vote in their own local elections. 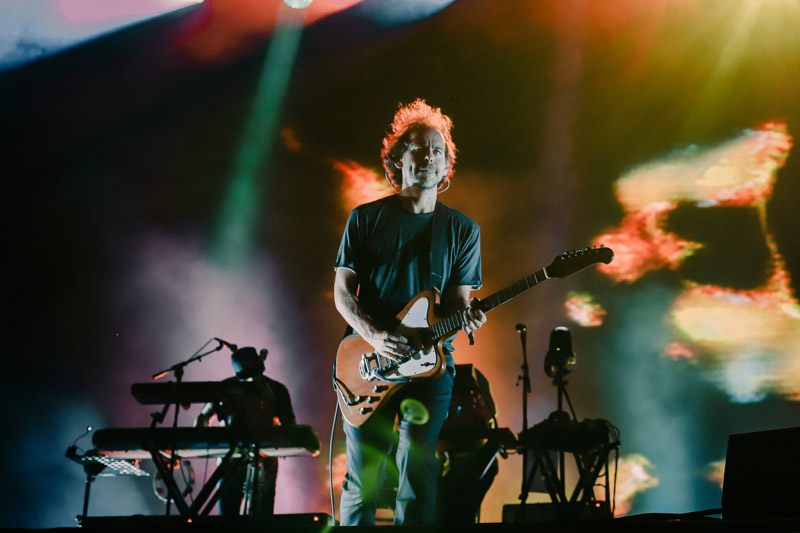 More humorous on the political end was Berninger saying, “I’m actually wearing a new perfume tonight – it’s called ‘Manafort’. It stinks.” Even the normally stoic guitarist Bryce Dessner laughed at that (or maybe it was his brother & fellow guitarist Aaron – always hard to tell them apart, as they don’t have wildly different haircuts & instruments like actual twins, drummer Bryan & bassist Scott Devendorf). And classic “Fake Empire”, from 2007’s Boxer (QRO review), “Isn’t at all applicable to today. God, it was written about Bush…”

Other, non-political comments included dedicating “I Need My Girl” to his wife, “Because she’s awesome – to all our wives. Some are better than others…” “Slow Show” was dedicated to where they were staying, the Langham Hotel, with a blinking “gilded” building next door – but Langham has blackout curtains. “Carin at the Liquor Store” was sent out to their audio engineer Evan Middlesworth, “‘Evan at the Liquor Store’ didn’t sound as cool.” [note: it’s actually named after his wife, Carin] Berninger noticed the Tito’s Handmade Vodka Stage across from them, and said that the band could use some of that up there. Undoubtedly drinking, Berninger is the fun kind of drunk on stage. 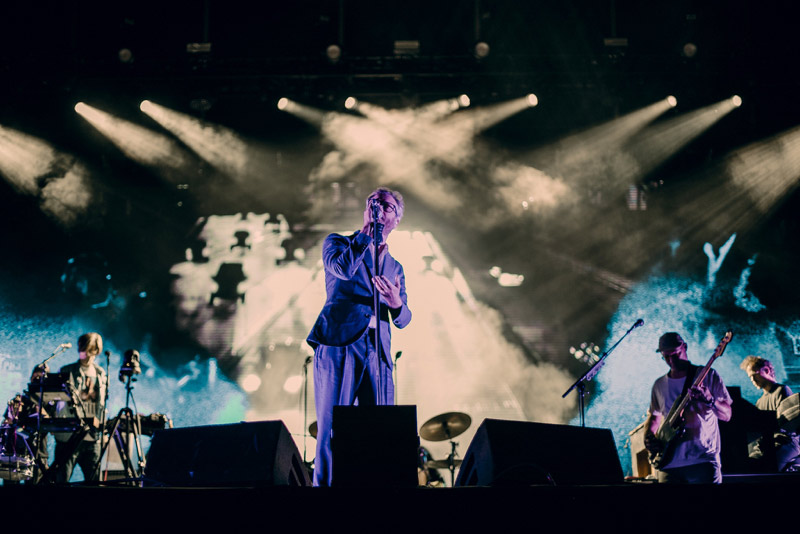 None of this took away from the music. Indeed, it’s great how the band’s upbeat mood contrasts with their tragic material. While their set the night before at their intimate Lollapalooza after-show at The Metro (QRO live review) naturally focused on their most recent record, last year’s Sleep Well Beast (QRO review), their festival performance stretched wider across their career. So there were great Sleep songs like “The System Only Dreams In Total Darkness” and “Day I Die”, but there were also much older pieces like “Fake Empire” and “Mr. November”, back-to-back. Indeed, the set/evening ended with “About Today”, from their self-titled 2001 debut album.

Just between “Empire”/“November” and “Today” was “Terrible Love” (from 2010’s High Violet – QRO review) – and Berninger jumping into the crowd for one more time. And this time he went deep, mike chord in tow, held up by roadies and fans. At one point he was lifted up by the fans to sing to the entire crowd, and closed it by effectively making his way all through the crowd and back to the photo pit [including right by your correspondent, which was pretty much the best thing ever…]. 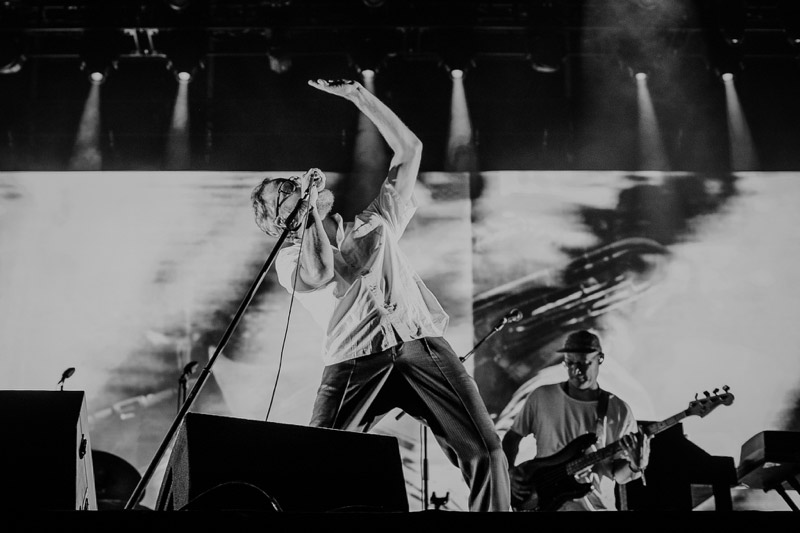 Against Me! House of Vans Concert Photo Gallery