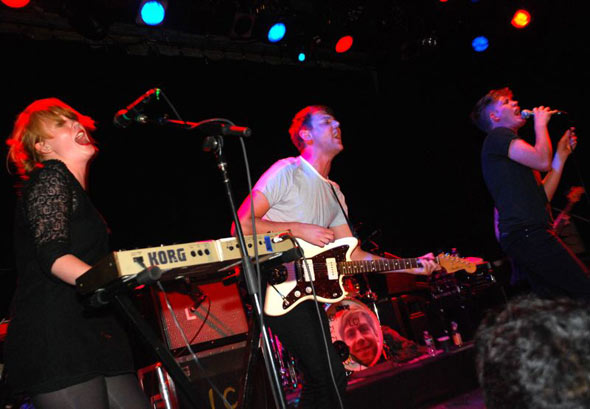 Click here for photos of Los Campesinos! at 2010 Truck Festival in Steventon, U.K. in the QRO Concert Photo Gallery

Click here for photos of Los Campesinos! at Union Pool in Brooklyn, NY on August 3rd, 2009 in the QRO Concert Photo Gallery

Click here for photos of Los Campesinos! at Bowery Ballroom in New York, NY on February 15th, 2008 in the QRO Concert Photo Gallery

Click here for QRO’s review of Los Campesinos! at Maxwell’s in Hoboken, NJ on May 14th, 2008

Click here for photos of Los Campesinos! at Bowery Ballroom on November 30th, 2007 in the QRO Concert Photo Gallery

Comedian Marc Maron once said, "I feel sorry for anybody who’s never been addicted to anything," [he was talking in reference to smoking,] "Because they’ve never had the experience of wanting something so bad – and getting it."  In music, it is rare the band that can actually become addictive – even the best music can get tiresome when played on repeat, or at least become one note.  It’s rare when a band’s albums and/or live shows can leave you wanting more, not only once but every single time.  The kind of band you could listen to exclusive for the rest of your life and be happy to, the kind of band who you would go see every night.  Los Campesinos! proved, once again, that they are one of those rarities when they play Brooklyn’s Music Hall of Williamsburg (QRO venue review) on Friday, October 15th.

Despite hailing from all the way across the pond in Cardiff (though no one in the band is actually Welsh), Los Campesinos! were visiting New York for the second time in 2010, even after their first visit in April (QRO photos) 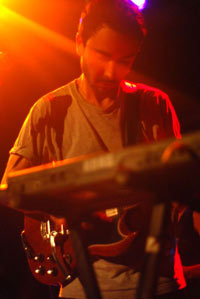 was delayed due to that Icelandic volcano (remember that?).  But the group could set up shop in the Big Apple & stay forever, given the fervent response they got from the Brooklyn crowd.  After the slow build of "In Median Res", the opener to this year’s Romance Is Boring (QRO review), Music Hall went absolutely nuts for the bands older "Death To Los Campesinos!" – the floor shook so hard with jumping fans that one might have worried that it’d give way and send them into the downstairs bar.

Though even that wouldn’t have slowed down the show.  Los Campesinos! make upbeat, twee-as-fuck indie-rock that can get anyone excited, even when singer Gareth Campesinos! (QRO interview) introduces a song by saying it’s "about how you’re all going to die alone".  He may have sung about the futility of love & life on 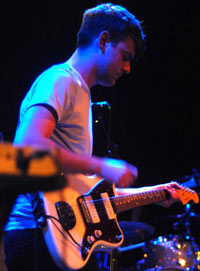 "Miserabilia" and the title track from 2008’s We Are Beautiful, We Are Doomed (QRO review), but no one can make it all more of an exciting anthem of lines like, "Shout at the world / Because the world doesn’t love you! / Lower yourself / Because you know that you’ll have to!" (and, as one fan said, "I’ve never seen anyone play the xylophone with such intensity…").  In fact, it becomes an almost cathartic cry, without being indulgent and even while making you happier. 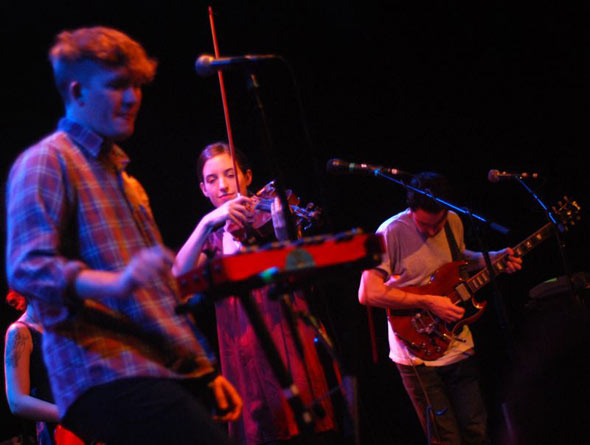 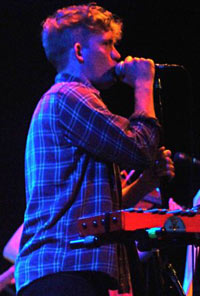 Gareth also proved the jokester between songs, such as thanking special guest horn player Tim (presumably Campesinos!, at least for this night), "Tim’s obviously a proper musician, and the thing with proper musicians is that they’re often dicks.  Tim’s a proper musician and really fuckin’ nice as well."  When Gareth realized that the set list (QRO photo) had multiple tracks from their latest album in a row, eschewing the earlier material on 2008’s Hold On Now, Youngster… (QRO review) that made them known (and is still the most beloved), he said, "So if you like the stuff before my voice broke, you can probably go for a shit or something."  He also told the crowd that their sound guy recently revealed that "…And We Exhale and Roll Our Eyes In Unison" was only song of theirs that their sound guy like, "But he’s being a right ol’ bitch."  He told everyone to "raise your Buds" before the currently-being-used-by-Budweiser-in-football-commercials "You! Me! Dancing!".  And when fans cried out for the band to never stop, he cheekily replied, "We’re playing tomorrow as well, so if you want to hear more songs…" 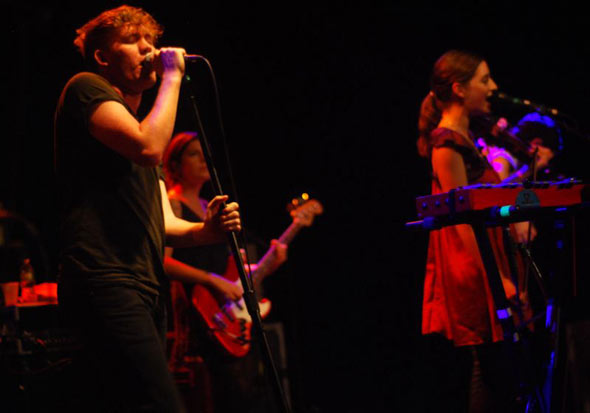 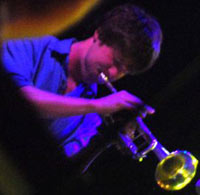 With three full-lengths, plus debut EP Sticking Fingers Into Sockets (QRO review), and non-album single "The International Tweexcore Underground", Los Campesinos! have been rather prolific, especially when you take into account that they have so many members to wrangle together (and no state subsidies like Canadian collectives get…), yet there wasn’t a song that they played at Music Hall that you didn’t want to hear.  Of course, with so many great songs, there were ones they didn’t play that you did want to hear (such as "Tweexcore" or its b-side cover of Heavenly’s "C Is the Heavenly Option", as one fan kept demanding, to no avail), but Gareth promised that the set list on Saturday would be different – though probably still wouldn’t include any Heavenly… 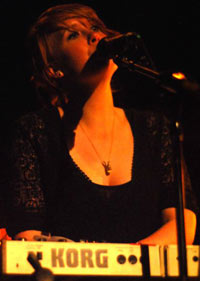 It also probably wouldn’t include "Tweexcore", as the piece is a duet between a young couple, one a punk (the girl), and one twee (the boy) – and the girl now singing the other half would be Gareth’s (actual) sister, Kim Campesinos!.  Last year, after finishing, but before releasing Romance, original female singer Aleks Campesinos! (QRO interview on her last tour) left the band to pursue her medical degree, breaking the hearts of numerous male and female fans. 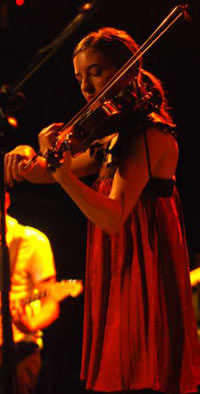 It’s been hard getting over Aleks, but Kim has more than held her own, especially with her live dancing.  And, most importantly, like Aleks, she’s a redhead…

Los Campesinos! had experienced even more recent turnover, when drummer (and three-time QRO interviewee – QRO interview) Ollie Campesinos! left (still not sure why…).  Current drummer Jason Campesinos! & touring back-up Rob Campesinos! certainly kept the beat, but no one could replace the shirtless Ollie on stage, the only Campesinos! who could challenge Gareth for twee Idol.  With bassist Ellen Campesinos! (QRO interview) still stuck behind the more ‘intensely trying to make music, as opposed to dancing about like Gareth’ guitarist Tom & violinist Harriet Campesinos!, it was Harriet who received the lion’s share of the male love from the crowd (it would also be unseemly to do so towards Kim in front of Gareth…).  Though Harriet has been getting prettier & prettier since the band started (maybe just ‘cause she’s played hard-to-get with QRO, the only charter Campesinos! we’ve never interviewed) – but so has everyone in the band, 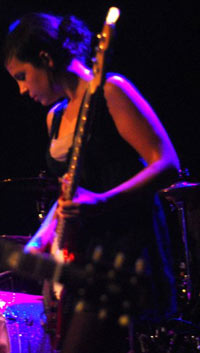 such as Ellen & Gareth’s new ‘dos.

But enough about how Beautiful they are – Los Campesinos! are just so incredibly engaging live, it’d be hard for anyone not to dance start-to-finish.  That’s not just true for ‘old classics’ like "Dancing!" and "My Year In Lists", but also new pieces such as "Romance Is Boring" and "There Are Listed Buildings".  Romance‘s sad "The Sea Is a Good Place To Think of the Future" might just be the band’s best song ever, and held up as such live – while they were still able to close with always-closer, "Sweet Dreams, Sweet Cheeks". 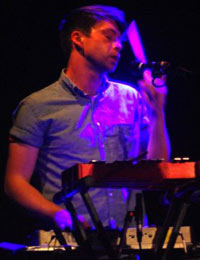 Los Campesinos! playing "The Sea Ia a Good Place To Think of the Future" live at Music Hall of Williamsburg in Brooklyn, NY on October 15th, 2010: 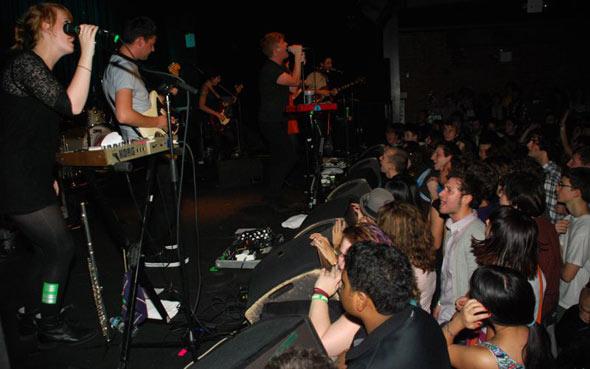