Click here for photos of festival sights at 2011 Main Square Festival in Arras, France in the QRO Concert Photo Gallery

A midsummer’s dream for a music lover couldn’t come in the more perfect form of Arras’ Main Square Festival.  A music festival set in the Pas-de-Calais area of Northern France, the Main Square Festival may not yet be a household name, but has certainly providing gems of musical goodness to the French since 2004.

This festival has a very special element to it – incorporating the traditional outdoors summer European festival feel with the city – the festival was held in the Grand Place in Arras, until is was moved this year to Citadelle Vauban to accommodate the rapidly growing demand for this festival, and QRO decided to check out what all the fuss was about. 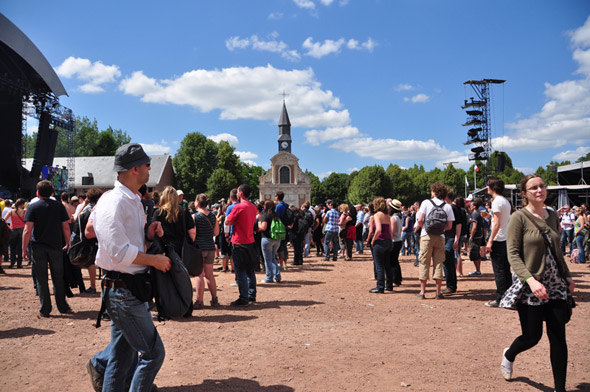 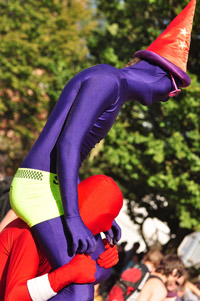 From 2004, starting with just two acts, the line up and grown and showcased internationally famed superstars – from Placebo in it’s debut year, to Depeche Mode, Muse – and even in 2008 – Celine Dion, Sigur Ros, and the mighty Radiohead all on the bill.  Constantly growing, and now one of the largest festivals in France at 100,000 festival goers – this festival set in the beautiful picturesque setting in the French Artois area.  Although the festival has moved from the Grand Place – appropriately named – the new setting of the Citadelle Vauban facilitated the festival on form, with grand old walls surrounding the festival square.

Main Square festival expanded to two stages this year, the Main Stage and Green Room, enabling a greater number of artist, allowing a truly spectacular line up consisting of major megastars – Coldplay, Portishead, The National, Elbow, Arcade Fire, and The Chemical Brothers to name but a few.  QRO had the tremendous opportunity to check out the festival on its second day on the 2nd of July 2011. 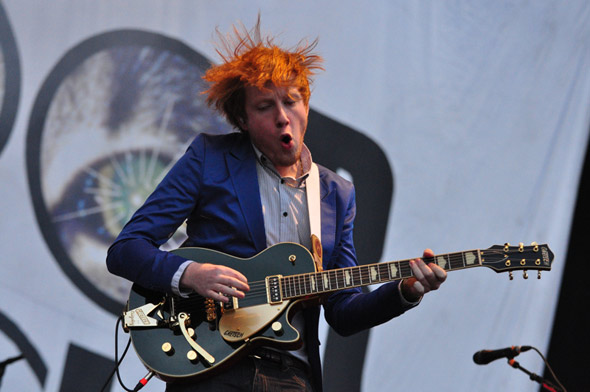 Click here for photos of Triggerfinger at 2010 Haldern Pop Festival in Rees-Haldern, Germany in the QRO Concert Photo Gallery 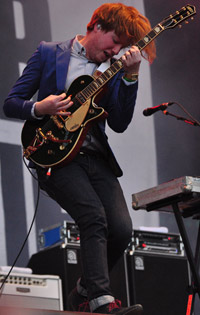 Opening up the festival were Triggerfinger, Antwerp-based rock ‘n’ rollers renowned for their live performances.  Often placed along the likes of Queens of the Stone Age and even Led Zeppelin, Triggerfinger did not fail to entertain with their rock star poses and hard-hitting tunes to get the crowd going in the early hours of the day, as did Kasabian on the Green Room stage with their heavy beats and rearing riffs, akin to their influences Oasis and the Stone Roses, but perhaps it was younger band Two Door Cinema Club which stole the limelight on the Green Room stage.  Two Door Cinema Club, as part of their extensive European tour, showed no signs of faltering – no surprise given their recent string of awards and notability in the British independent scene.  With their catchy, synth based tunes, the band pounded out a string of tracks of their 2010 debut Tourist History (QRO album review), causing a non-stop dance party from festivalgoers.  Two Door Cinema Club is a band who ooze potential, and given the memento they are currently excelling, it seems there’s no stopping this young collective. 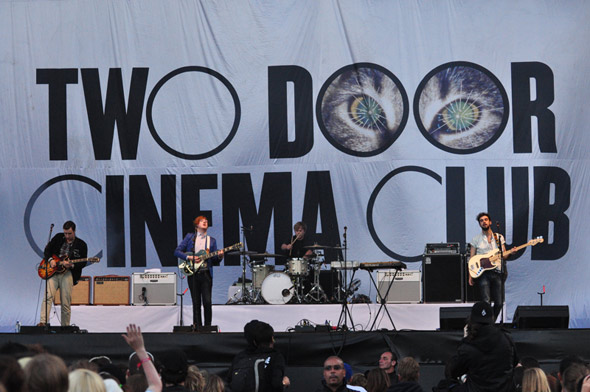 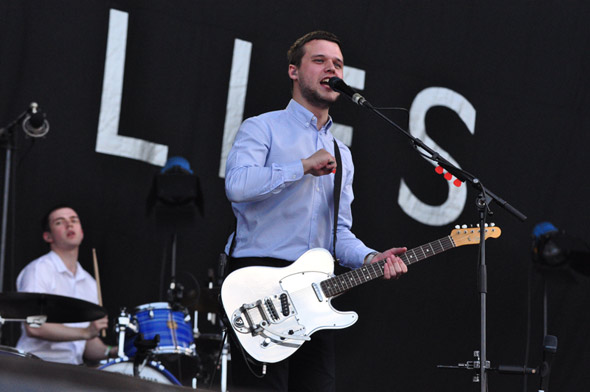 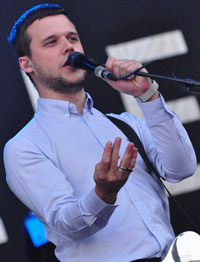 Likewise, the same could be said of White Lies – a band hailing from West London who be widely proclaimed, with good reason, in the eyes on the musical media.  Laden with confidence, Frontman Harry McVeigh beckoned the crowd to give it their all, and as the band embarked in powerful energetic exchange between fans and band, White Lies wowed with their baritone vocal and riveting bass.  Often compared to the likes of Interpol, the Editors, and Joy Division, this band differs in a way which gives them a unique edge, with invigorating live performances and intimate exchanges with the crowd, causing quite the stir with the young ladies.  Whereas many comparative bands are ambiguous in their nature, both musically and in personality, White Lies compound their assured nature with literal, dark lyrics in tracks such as their leading singles “Unfinished Business” and “Death” – song titles which speak for themselves. 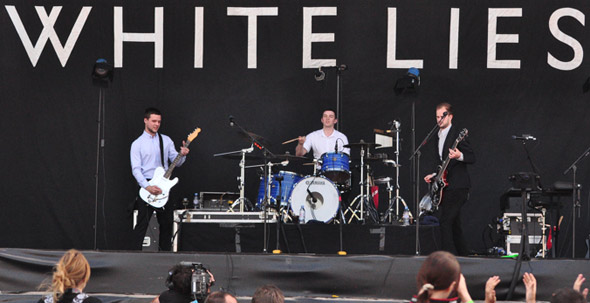 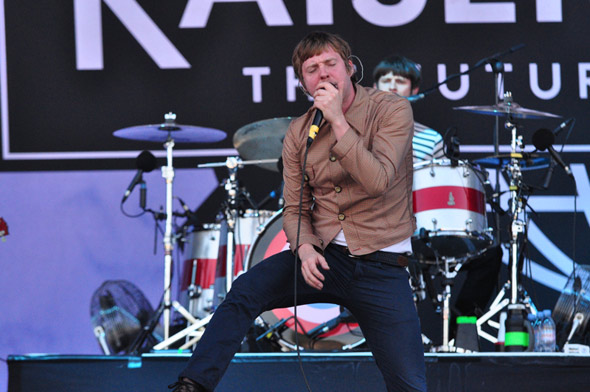 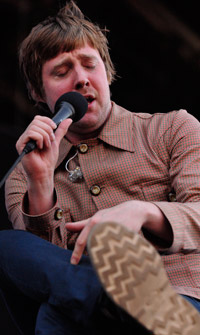 Championing yet again the British music scene were the following act, the Kaiser Chiefs.  Well established in the art-rock movement of 2004/5, frontman Ricky Wilson entertained with animated character through a set composing of a range of their tracks of their four albums.  The band have enjoyed a noteworthy successful career and from their live performance, it is clear to see why – the bands animated demeanour provides enough entertainment for continual engagement for more than is necessary, a wonderful showcase of the typical Leeds ruffian – but it’s so visible that it’s the lasting quality of their almost sickeningly catchy tunes which make this band so successful.  Tunes like “Oh My God” and “I Predict a Riot” do indeed do as they say, despite being over six years old in release.  Even later tracks such as “Never Miss a Beat” cause a frenzy, and although it would appear the Kaisers may play greatly to the notion of a one trick pony, there’s no denying that there is some solid basis for the success the Kaiser Chiefs have attained. 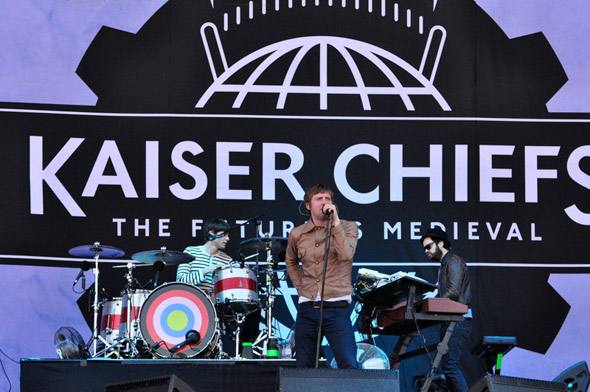 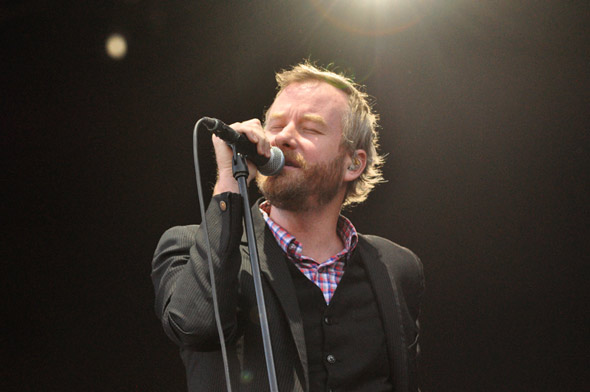 Click here for photos of The National three days earlier at Heineken Open’er Festival in Gydnia, Poland in the QRO Concert Photo Gallery

Click here for all of QRO’s coverage of The National in ‘Spotlight On : The National’ Feature 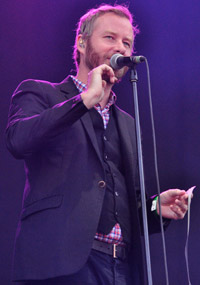 Cutting back on the Brit madness as the dusk was settling in were Brooklyn rockers The National.  Bringing a special, atmospheric ambience, the band did not fail to stun with their trademark melancholy in songs such as “Sorrow” and “Runaway” off their latest offering, High Violet (QRO review).  However, it was songs such as “Squalor Victoria” and “Abel” which caused the crowd the open their eyes, as frontman Matt Berninger provided a spot on lyrical catharsis.  However, what made this set so special was the appearance of Richard Reed Parry and Win Butler of the Arcade Fire (see below).  The pair has been known to appear on stage with The National (the recording of High Violet had guest stars members of the Arcade Fire, alongside a flurry of other forefront runners in the independent scene) – and the victorious crescendos of “Start a War” were emphasized by the diversifying harmonies of Butler and Berninger.  The bands set ended far too soon as their set built up memento with triumphant anthems of “England, “Terrible Love” and fan favourite “Mr. November” – but there’s no faulting a band for leaving fans gagging for that little bit more.

Click here for photos of Arcade Fire at Bank of America Pavilion in Boston, MA on August 1st, 2010 in

Click here for photos of Arcade Fire at Orpheum Theatre in Boston, MA on May 10th, 2007

For fans of the Arcade Fire, that was more than a generous starter course to what was to come next.  The infamous band was to don the stage next in all their glory and exultant anthems.  With a myriad of instruments – more than you could count on all your fingers and toes – Arcade Fire stunned with a range of tracks of their three studio albums.  Although the crowd was somewhat un-reactive – causing some slight hostility from front man Win Butler – it didn’t take away from the solid performance from this magical collective.  Despite the crowd’s non-reaction, fan favourites such as “Power Out” and “Rebellion (Lies)” were heartfelt and caused a warm reaction from the docile crowd.  The band closed the evening with a pseudo encore with Butler chirping, “We should pretend to go away now and then you cheer and we come back again, but fuck it, let’s just stay here and play the songs,” and did so, causing a slightly abrupt ending to what was more than solid display of some most noteworthy artists in modern independent music worldwide.