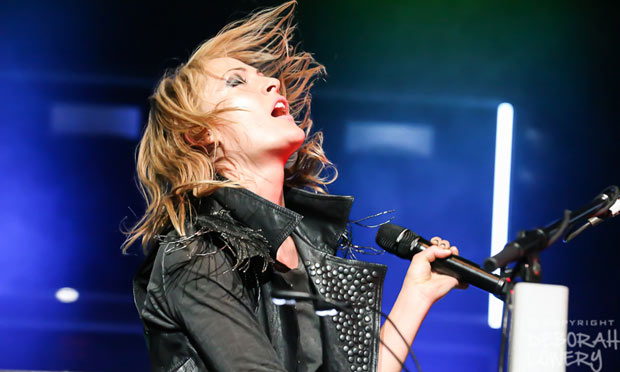 Click here for photos of Metric at Barclays Center in Brooklyn, NY on June 30th, 2015

Click here for photos of Metric at 2014 Riot Fest in Chicago, IL

Click here for photos of Metric at Bowery Ballroom in New York, NY on November 19th, 2013

Click here for photos of Metric at Austin360 in Austin, TX on November 1st, 2013

Unless you’re The Rockettes or an NBC Upfront, an appearance at Radio City Music Hall is gonna be special.  Other than its sister venue Madison Square Garden (QRO venue review) and maybe Red Rocks Amphitheater or Hollywood Bowl (QRO live review), Radio City is the most famous venue in the world.  It’s marquee is iconic, as is its history – oh, and it’s also a wonderful space (QRO venue review), a throwback to the movie houses and vaudeville theaters of yore, but with modern sound, light, and other amenities.  And Metric (and friends) made it extra-special on Sunday, September 23rd.

Opening for Metric at Radio City, and on this whole tour, was Quebec’s Half Moon Run.  Handpicked by their fellow Canadians, admittedly most people at the show didn’t know Half Moon, and it’s never easy to open at the massive Radio City Music Hall – people are still looking for their seats, or just talking & drinking back in the lobby, or haven’t even arrived yet.  Plus, those who are watching the opener are sitting down.  Oh, and you’re nervous ‘cause it’s Radio-fucking-City, no matter how psyched you are.  However, Half Moon delivered a set that worked with the setting, atmospheric at some times, touching at others – much like their debut Dark Eyes, which just came out up north and will hit the States in a couple of months. 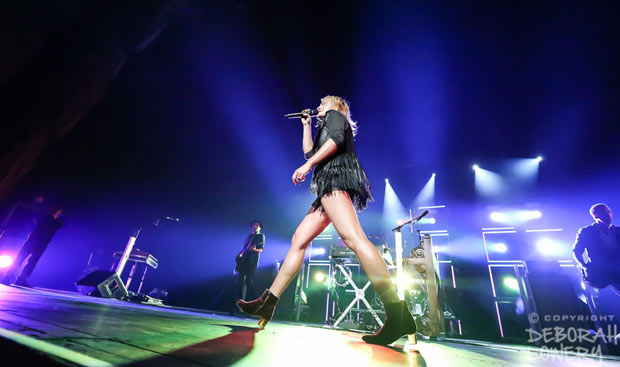 Click here for photos of Metric at Cynthia Woods Pavilion in The Woodlands, TX on October 27th, 2013

Click here for photos of Metric at Stubb’s in Austin, TX on May 1st, 2013 in the QRO Concert Photo Gallery

Click here for photos of Metric at Pearl Stable in San Antonio, TX on April 29th, 2013 in the QRO Concert Photo Gallery

Click here for photos of Metric at 2012 Osheaga Music Festival in Montreal, PQ, Canada in the QRO Concert Photo Gallery

Click here for QRO’s review of Metric at Music Hall of Williamsburg in Brooklyn, NY on June 13th, 2012

Metric began their show with “Artificial Nocturne”, the opener to this year’s Synthetica (QRO review), and nearly half the set was devoted to the new album, including one-two-three start of Synthetica‘s one-two-three start of “Nocturne”, “Youth Without Youth”, and “Speed the Collapse” (though, admittedly, “Nocturne” is actually kind of a prelude to single “Youth” – QRO single review).  With each Metric record bigger than the last, their show does naturally tilt towards more recent material, Synthetica and the 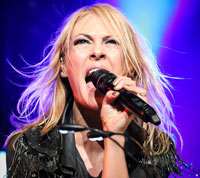 prior Fantasies (QRO review).  However, those songs are particularly well-suited for the massive spaces that Metric are playing these days, like Terminal 5 (QRO venue review), Prospect Park Bandshell (QRO venue review), and Radio City – they went into their encore break with Fantasies‘ great “Stadium Love”!

There were a few newer songs on the set list that long-time fans might have replaced with older songs (Synthetica‘s slower “Dreams So Real” or “Clone” for “Combat Baby”, as the guy next to your correspondent kept shouting for…), but also a number that were elevated live, such as “Breathing Underwater”, while Fantasies tracks like “Stadium”, “Help I’m Alive”, “Sick Muse” and “Gold Gun and Girls” are, 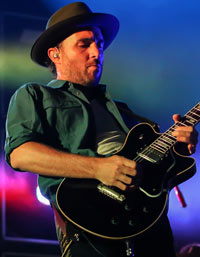 by this point, as much ‘classics’ as earlier pieces “Empty”, “Dead Disco”, and “Monster Hospital”.  And if they didn’t need “Black Sheep” from Scott Pilgrim vs. The World soundtrack (QRO review) as their encore return, at least they chose their contribution to a film flop, and not to the Twilight saga (QRO soundtrack review) – though they did score Robert Pattison’s Cosmopolis (but that was a David Cronenberg film from a Don DeLillo novel…).  Plus, Metric

took advantage of their big electronic lights backdrop at Radio City to do a favor for the crowd – the seconds until they returned for an encore countdown on the stage, from 120 to 0.

Plus, there was one Synthetica song that got elevated to enormous heights – “The Wanderlust”, as at Radio City, Metric got the song’s guest singer on the album to appear live: Lou Reed!  Singer Emily Haines started by telling how “Wanderlust” was about such things as coming from her small town in Ontario to New York to Radio City, even if she did that as a kid to see Dionne Warwick, and how her big brother told her to listen to artists like Patti Smith and The 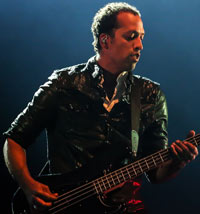 Velvet Underground.  Then she got to say the words we’ve pretty much all wanted to say, “Ladies and gentleman, Lou Reed…”  His appearance came as a huge shock to even the hipsterati (photogs were all griping, of course, that he hadn’t come out during the songs they were approved to shoot…), and there were gasps that turned into cheers.  Mr. Reed isn’t perfect (Lulu can attest to that – QRO review), but his deeper talk-chorus already worked perfectly on Synthetica (again, unlike his Metallica collaboration Lulu…), and was only more special live at Radio City. 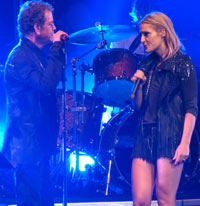 Of course, you can’t bring out Lou Reed and not play one of his songs, so Metric & Reed, along with special guests Half Moon Run (getting to do a second thing on their bucket list on the same night, playing with Lou Reed…), performed The Velvet Underground’s ultra-classic “Pale Blue Eyes”.  The sweet and oh-so-coverable song (best covered by R.E.M. on maybe the greatest b-sides collection ever, Dead Letter Office) hit the sweet spot – despite, as Haines remarked afterwards, that she & Reed were looking into each other’s brown eyes…

When a rock band comes to Radio City, things have changed, and not just because you’re going from cramped standing crowds in hipster areas to designated seating (even if everyone is standing) in Midtown (there wasn’t a chance to get close enough to the stage to see Haines’ brown eyes, unlike a couple of months ago at that ‘other’ Music Hall, Music Hall of Williamsburg – QRO venue review – where they played a special intimate fans-only show – QRO review; but you also didn’t have small girls asking to get in front of you, only for your gallantry to be rewarded by them then dragging their giant boyfriend up with them…).  ‘Made it’ may be a relative term these days in music – Haines did joke that the rest of the band thought her stage banter was like late night talk show routine, and she said it could be a fallback, “Look man, you never know – rock ‘n’ roll might never work out…”  But it can’t get much more special than playing Radio City Music Hall (at least, until MSG’s repairs are done and it full reopens…). 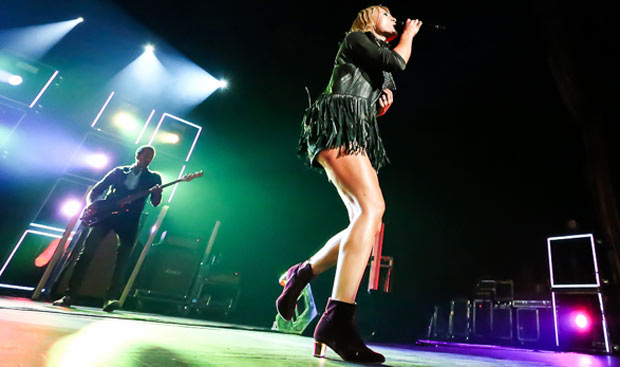 Cable music channel FUSE is streaming from Radio City all this week as part of their ‘FUSE Music Week’, including Metric’s performance (and you also got a free 20 oz. Diet Coke from FUSE for checking in at Radio City on foursquare – and even Diet Coke ain’t cheap at Radio City…).  Upcoming streams include Monday’s with Grizzly Bear, Tuesday’s with Gotye, Wednesday & Thursday’s with AVICII, and Friday & Saturday’s with that other Lou Reed collaborator, Jack White – QRO NYC Show Preview 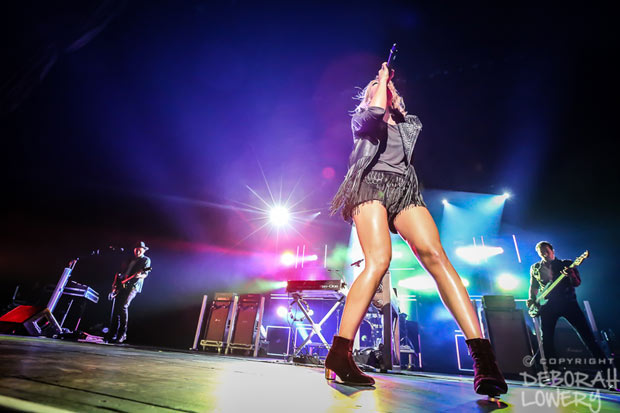