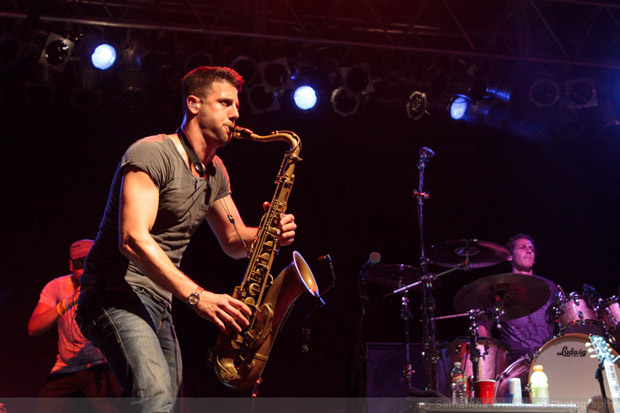 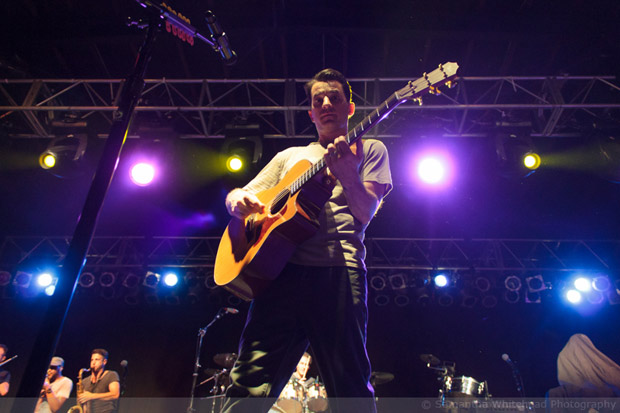 Three stellar artists performed at Crossroads in Kansas City on the very hot evening of Friday, June 21st.  O.A.R. passed through Kansas City on the third stop of their Sounds of Summer tour and drew quite a crowd.  VIP tickets to the event were completely sold out and the general admission area was packed by the time O.A.R. took the stage.  The two artists who graced the stage before O.A.R.’s set deserve a great amount of praise as well. 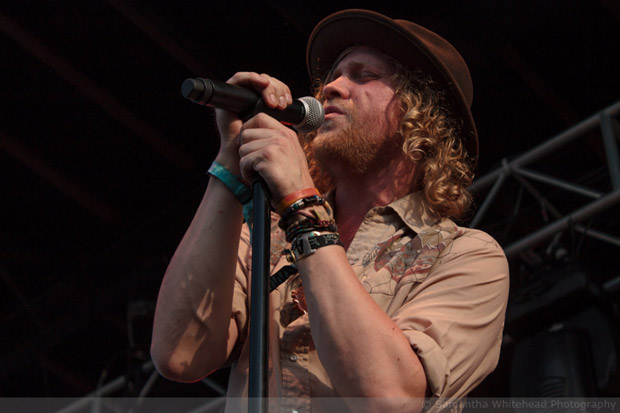 Click here for photos of Allen Stone at 2013 BottleRock Festival in Napa, CA in the QRO Concert Photo Gallery

Click here for photos of Allen Stone at Cargo in London, U.K. on November 21st, 2012 in the QRO Concert Photo Gallery 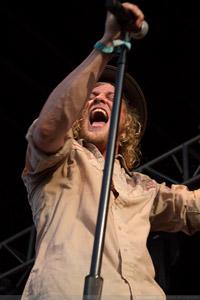 Allen Stone is truly one of the better kept secrets of the world of music and it would not be surprising if he is seen taking over popular charts in the near future.  Stone started the night off with a blues and gospel inspired set, warming the audience up despite the heat.  His lanky physique doesn’t match the power and soul of his voice, but definitely made for an interesting contrast.  His vocal improvisations were top notch and his band never missed a beat.  Bassist Brent Rusinow and drummer Jason Holt deserve specific recognition, as anyone with experience performing music would appreciate their style, precision, and the way they locked into an unbreakable groove on every song.  Stone’s set included “Sleep” and “Satisfaction” off his recent self-titled release, and the crowd went completely wild for a cover of Bob Marley’s “Is This Love”.  Allen Stone is definitely an artist to keep an eye on.  His rise to power has just begun. 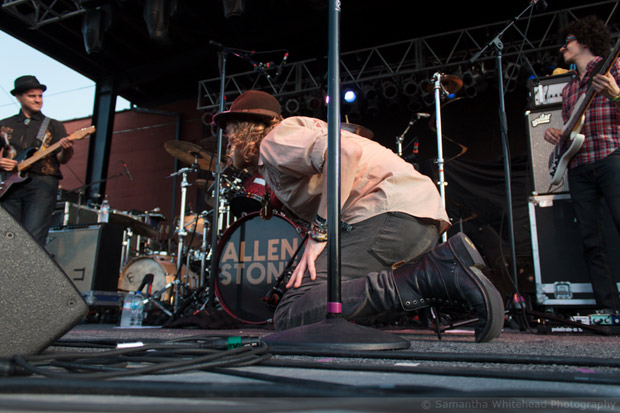 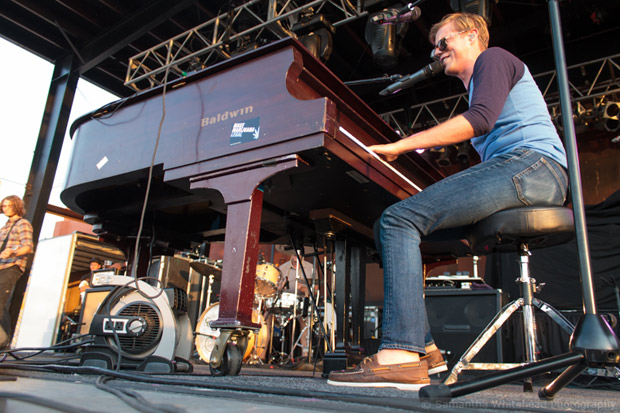 Click here for QRO’s review of Jack’s Mannequin at The Paramount in Huntington, NY on October 12th, 2011

Click here for photos of Jack’s Mannequin at Hammerstein Ballroom in New York, NY on December 2nd, 2009 in the QRO Concert Photo Gallery 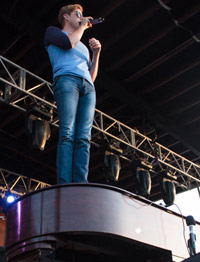 With such a fantastic opening act, Andrew McMahon must have been under pressure to deliver a killer set.  Not surprisingly, he did.  Although he was rooted to the seat of his piano for nearly the entire set, McMahon has a demanding stage presence.  His passion and talent was readily apparent as he struggled to stay seated as he pounded away on the keys, often standing and knocking over the seat he had been perched on.  At one point he was climbing atop the piano, microphone in hand, singing to the crowd, who sang every word right back.  McMahon’s solo material holds its own against his work with Jack’s Mannequin and Something Corporate and his set included a tasteful mix of the three.  For the Something Corporate fans there was “I Woke Up In A Car”, for the Jack’s Mannequin fans there was an amazing performance of “Dark Blue”, and for those who just love Andrew McMahon there was “Synesthesia” off the new solo album, The Pop Underground. 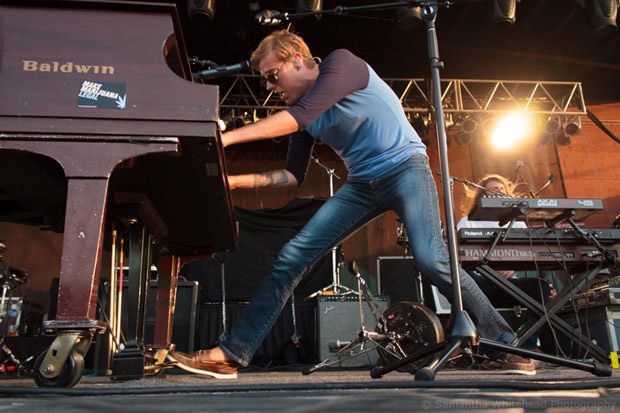 Click here for photos of O.A.R. from this show in the QRO Concert Photo Gallery 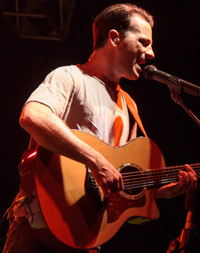 O.A.R. took the stage after a lengthy set up filled with an eclectic mix of pre-set music.  Everything from Britney Spears to Daft Punk to Led Zeppelin graced the ears of the increasingly impatient crowd.  When O.A.R. finally showed up, they proved well worth the wait.  Elaborate stage lighting and a great audio mix made the set even more enjoyable.  The band quickly settled into a groove and just let it build.  Unlike some ‘jam bands’, O.A.R. can really sit on a song and make it something wonderful.  Lengthy solos never became boring or repetitive, and the musical talent of every member was fully showcased.  Like Allen Stone’s supporting musicians, Jon Lampley and Evan Oberla (O.A.R. trumpet and trombone players, respectively) deserve a good amount of praise.  When they weren’t playing sharp, tight horn lines, they were dancing and just enjoying the music, something that many bands simply forget to do.  Saxophonist Jerry DePizzo and frontman Marc Roberge played off of each other’s solos and stage presence, creating a perfect mix of interaction between individual band members and the audience alike.

O.A.R. is, simply put, a fun band to see.  Their music is enjoyable, their talent is undeniable, and the vibe they put off is perfect for a warm night spent outside.  O.A.R. is the perfect summer band. 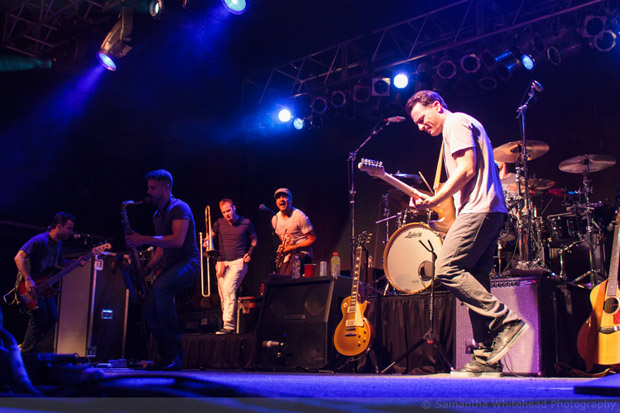