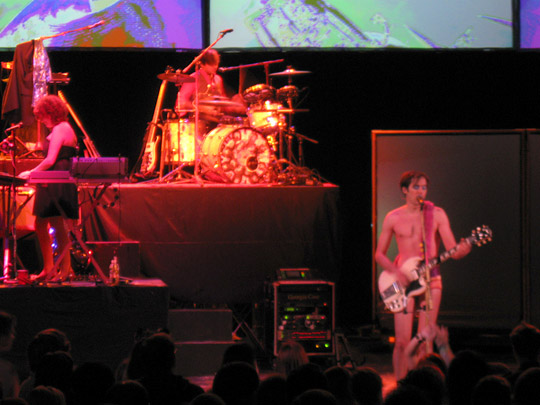 One of the pop world's most eccentric acts, of Montreal, brought their traveling band of musicians, actors, and props (but no animals this time) to Boston's Orpheum Theatre, for one tripped-out experience.

From the dancing golden Buddhas to the body paint to Kevin Barnes' dozen-or-more costume changes throughout, this was clearly no ordinary performance.  With a double, rising platform set-up with three giant screens behind it, of Montreal's stage looked like some '60s Batman TV show set.  That, combined with a semi-Shakespearean plot being acted out by Barnes and a cast of actors, it was something out of an acid-washed Vegas show. 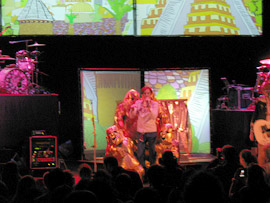 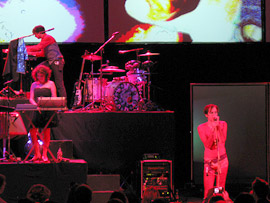 Over the course of a couple hours, the band dipped heavily into the material from their new album, Skeletal Lamping, while picking out gems from their past.  Tracks like "Wrath Pinned to the Mist (and Other Games)", "Disconnect the Dots", and "She's a Rejector" were the most well-received of the night, while the crowd soaked in a lot of the new songs while the mind-bending performance accompanied them. 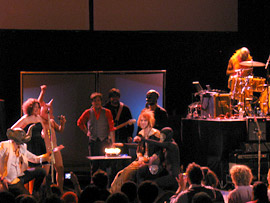 There was also the occasion of it being guitarist Brian Poole's birthday, so the crowd sang him "Happy Birthday" while the band presented him with a cake & candles.  He graciously thanked them after blowing all of the candles out in a touching moment.  After Barnes' portrayed a minotaur in love with a satyr, then was hung, and reborn wearing only whipped cream, the band walked off to rapturous applause.  They came back for a couple-song encore, which ended on a cover of Nirvana's "Smells Like Teen Spirit" which was not only a solid effort, but spun the crowd into a new level of excitement to leave with.