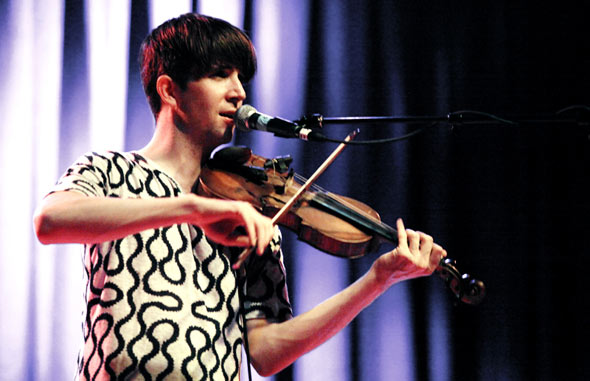 Click here for QRO’s review of Owen Pallett the last time he was in Portland, opening for Mountain Goats, at Wonder Ballroom on November 11th, 2009

Click here for photos of Owen Pallett at 2009 Pitchfork Music Festival in Chicago, IL in the QRO Concert Photo Gallery

At the southeast side of Portland, Aladdin Theater sits off a minor highway, in a mellow residential area that eventually leads you to Mt. Hood, Oregon’s highest peak.  The seated venue, that started as a vaudeville house in the ‘20s, usually hosts shows that attract the thirty-something and older.  This is not the usual scenester hangout, or the place to throw your body around uncontrollably.  Somewhat befitting for a performer like Owen Pallett, who doesn’t follow trends, nor betray his Virgo trait of precision.

The setting at the Aladdin on Tuesday, May 11th, was a stark contrast to the last time Pallett came to town, when he opened for The Mountain Goats (QRO review), at The Wonder Ballroom – a newer, hipper venue that often hosts the latest, and the hottest, acts of the indie world.  A place where the security guards stay very close to the stage, to keep the crowd in control, and the area near the stage is usually packed like a can of sardines – by half time, you feel like you’re in a bloody sauna.  But at the Aladdin, you could setup a merchandise table, or even pitch a tent, in the space between the audience and the performer.  No one dares to jump up off his or her seat to show some moves, or tries to grab the performer’s attention.  The ample space on the stage could have easily swallowed Pallett and his assistant, Thomas Gill, with its prodigious dark velvet curtains – had their performance been less than mesmerizing.  The Canadian 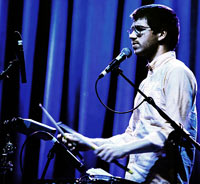 singer-songwriter, whose former moniker, Final Fantasy, seems like a memory from another life these days, has an uncanny ability to conjure the grandeur of a full band, only with his violin and keyboard, enhanced with loop pedals and effects, and occasional help from Gill’s guitar and percussion.  It was hard to tell whether Pallett, the musician, was the magician, casting a spell on us, or we were set up to experience a suspension of disbelief in the former movie emporium, but his orchestral synth-pop, with lush boy choir vocals, transported you into his fantasy world, where Owen was truly a god.

Owen Pallett playing “The Great Elsewhere” live at Aladdin Theater in Portland, OR on May 11th, 2010: 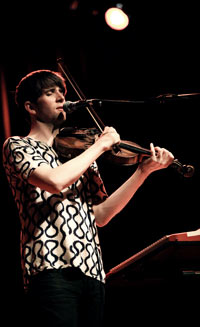 Pallett’s critically acclaimed latest album, Heartland (QRO review), where he had cast himself as a god, in a fictional land of Spectra, compromised half of the set.  The first track from the new record, “Midnight Detectives”, opened the show, with Gill gently brushing the snare drums, and Pallett plucking his violin to his sweet innocent voice, like sprites in a magical forest.  Other tracks from his third full-length release, “Keep the Dog Quiet”, “The Great Elsewhere” and “Lewis Takes Action” were played earlier on, while “E for Estranged”, “Flare Gun” and the first single off Heartland, “Lewis Takes His Shirt Off”, were inserted toward end of the set list.  Almost half of the time, Pallett stood alone on the stage, which could have accommodated Polyphonic Spree (QRO photos), seamlessly switching off between the violin and the keyboard to wrap the spectators in a Baroque pop heaven.

The fan favorite and Final Fantasy’s breakthrough song, “This Is the Dream of Win & Regine”, wafted in the dark theater before the show was even halfway over, proving that Pallett has composed several end-of-the-show worthy tunes since then.  Other Final Fantasy ‘classics’, like the clever real-life drama, “This Lamb Sells Condo”, and part of the part of the 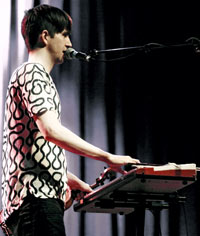 Spectra saga, “The Butcher”, made the set list, as expected.  And of course, the show would not be complete without “Many Lives – > 49”, the song known as where Pallett shouts into his violin, and people debate about what he actually said.

Being eloquent, whether singing or talking, Pallett charmed his audience with candor and uninhibited, or perhaps unintentional, humor.  Wearing a curious black and white shirt, loosely hanging from his thin frame, paired with black jeans, Pallett looked out from a forest of bangs, welcoming questions from the crowd.  A man shouted, “Explain your shirt!  Explain yourself.”  Pallet replied, “Explain my shirt?  It’s a – Vivien Westwood shirt – it’s one of her classic designs – she makes wallpaper in this design.”  The crowd busted out in laughter. 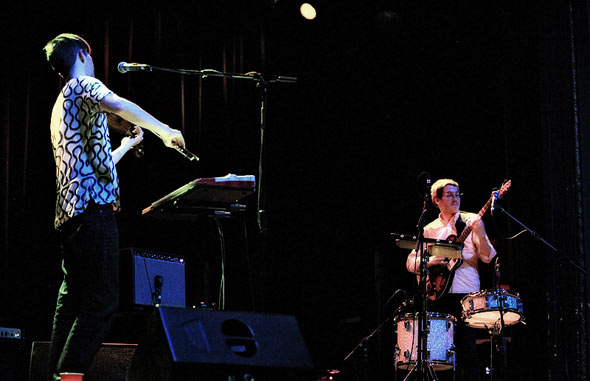 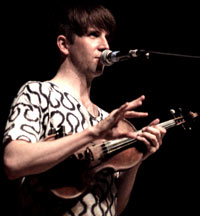 The Toronto-based musician professed that Portland is in his list of top three worst shows ever.  Pallett told the story of the time when Gus van Sant and other famous people came, when he opened for Bloc Party (QRO album review) with a casual demeanor: “You guys all talked during my set…  I was just thinking to myself, all these famous people are watching the show, and I’m totally sucking.  And we finished the show with ‘Better Than Worse’, which has this moment – where… usually with a quiet audience, it’s really a poignant moment.  But in this one – I just watched, as the crowd rose up – and talked, and didn’t even notice as the violin faded out to nothing.  So I picked up the violin and walked off the stage to no applause.  It was – A-mazing!”  The audience laughed with Pallett as he let out a nervous manufactured chuckle.  How telling of people, who have arrived to witness the fad that is/was Bloc Party (they make 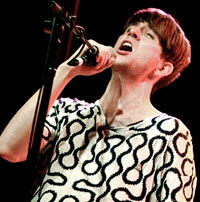 fine and sometimes, infectious songs, but their influences are written on their sleeves), but closed their ears to new musical possibilities.  You won’t have too much trouble finding music comparable to the English quartet, but Pallett is a timeless virtuoso, not easily replaceable with any artist on your iTunes.

Gay male stereotype aside, who else but Owen Pallett, who has given birth to a high concept postmodern masterpiece like Heartland, as well as Polaris Music Prize winning He Poos Clouds, would end the night with a cover of Mariah Carey’s “Fantasy”?  This time, the audience did not utter one word during his performance, and their enthusiastic claps and warm cheers let Pallett know that Portland wants to be in his top three best concert experience list. 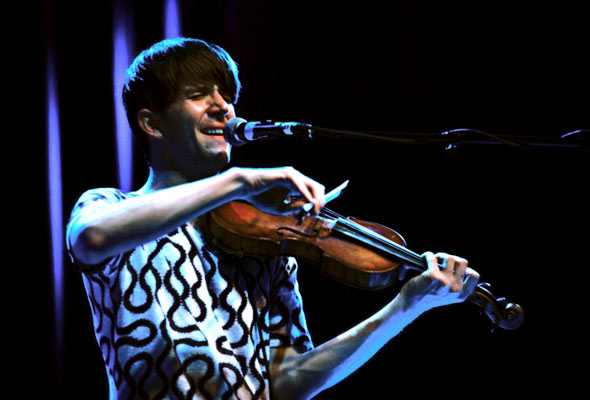