Pandora brought its Discovery Den to New York for the holidays.... 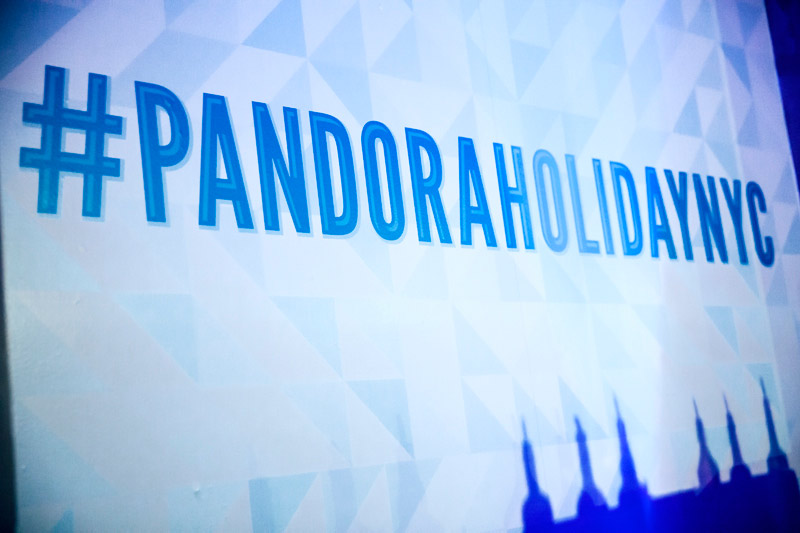 The music business is still in serious upheaval, now thirteen years into the twenty-first century, as album sales still slide and internet file sharing still runs rampant.  However, one new aspect of the industry that is working is internet music services, such as Pandora Radio.  Pandora is an internet radio station that selects songs based on a listener’s preferred type of genre, and then modifies its selections based on listener feedback.  Think recommendations on Amazon, only off of songs that you listen to, instead of books you bought your parents as gifts.  The selections, based on a highly complex algorithm from the ‘Music Genome Project’, can bring new artists to a listener, something the service touts over the mostly generic, corporately owned radio stations these days.  For the last few years, the Oakland-based company has hosted a ‘Discovery Den’ at Austin’s South-by-Southwest Festival (QRO recap), and on Saturday, December 7th, brought the Den to New York for the holidays in Pretty Lights, Chromeo, and Tegan & Sara at the Grand Ballroom.

First things first, having the free RSVP (which went fast) event at Grand Ballroom (QRO venue review) made for a slightly odd set-up.  The space above Hammerstein Ballroom (QRO venue review) is not a regular music haunt, probably because to enter people need to ride an elevator up to the seventh floor.  This made for a slow-moving general line, which had gotten long well before doors – and that was out in the cold (when doors did open, and the VIP line was let in first, people at the front of the ‘regular’ line booed…).  Yet inside Grand Ballroom is actually rather nice, with a carpeted floor and spacious balcony (admittedly the latter was only for VIP), and there was a back lounge set up by Roku, who make internet streaming digital media players.  It was disappointing that the 21+ event did not have an open bar (not even in VIP…), but it was correspondingly nice that Pandora had seemingly kept the number of people at the event well below capacity, making it a lot easier to move around (though undoubtedly made those who lined up early feel a little silly for having done so…). 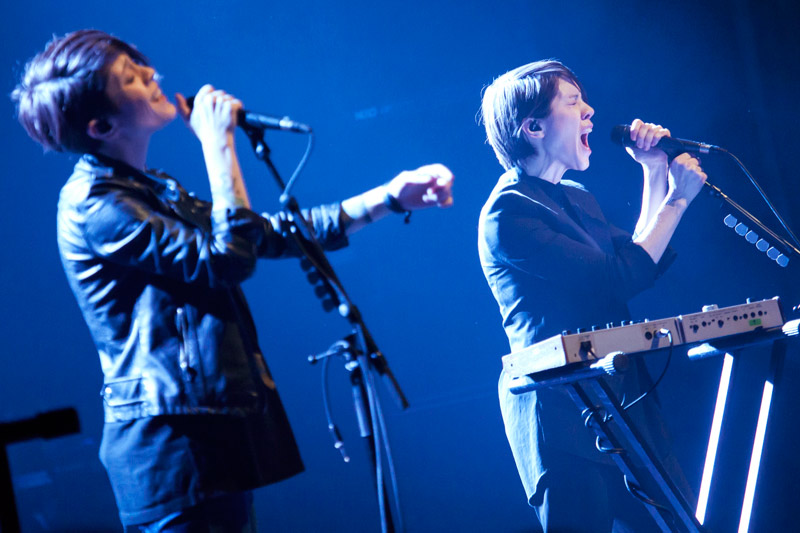 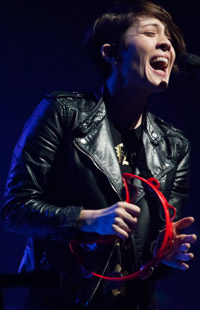 The three acts that played Pandora Discovery Den were selected by Pandora’s own service, based on users in the New York City area, making for a slightly odd, but popular, line-up.  Tegan & Sara were the ‘rock band’ of the evening, and were up first (perhaps because they required more stage set-up time than the DJs that were to follow).  Still riding high off of the success of this year’s Heartthrob (QRO review), the sisters Quin mostly played off of that album, but also had a few older numbers such as “Living Room” from 2002’s If It Was You and single “Back In Your Head” from 2007’s breakthrough The Con – though still closed with Heartthrob hit “Closer”. 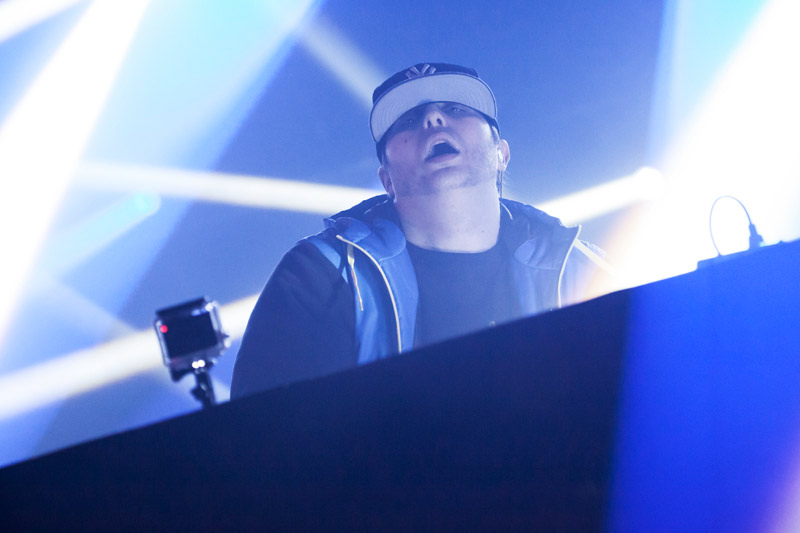 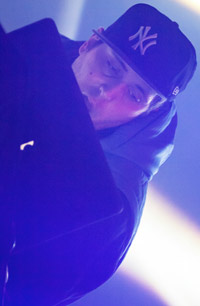 Playing first did mean that Tegan & Sara didn’t have time to do as much of the great between song banter that their regular live shows are known for (QRO review), but Tegan did jokingly comment upon all the “guys with baseball caps” in the crowd – the duo are known for a fan base that leans heavily towards the female, making such fellas an oddity at a show of theirs (though the pair did play the MLB Fan Cave this summer – QRO photos).  The bros were there because of headliner Pretty Lights, a.k.a. Derek Vincent Smith.  An acclaimed electronic DJ with, yes, a great light show, this was a chance to catch him in a more close-up setting than usual – and he was coming off of a Grammy nomination the day before for Best Dance/Electronica Album, for this year’s A Color Map of the Sun, the first record of his where all the samples were from his own original music.  Yes, there were glo-sticks out, but the event didn’t feel like a cheesy rave thanks to the classier nature of the event (not to mention there being no minors…). 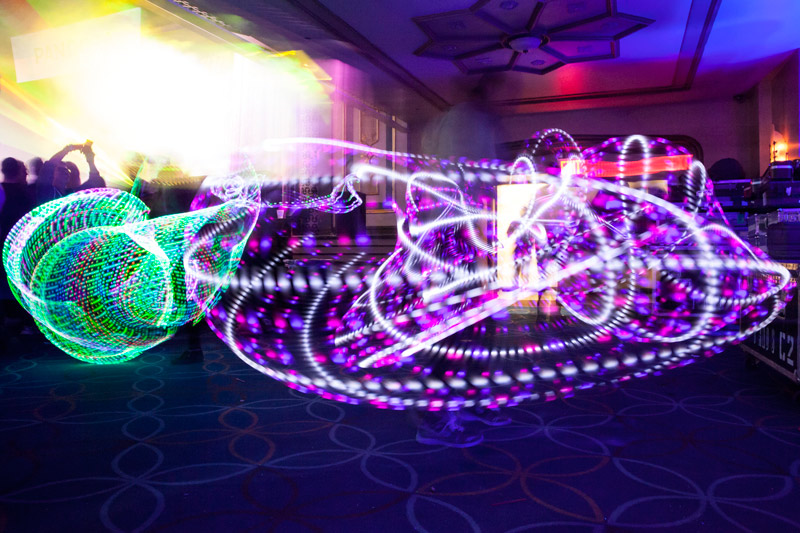 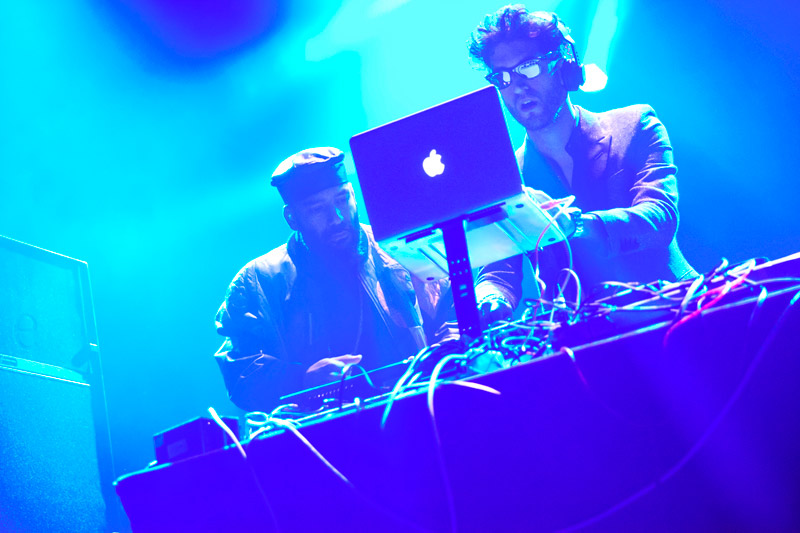 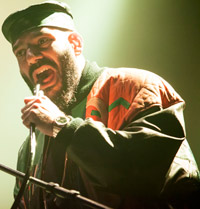 Between the two acts was a DJ set by Chromeo, but it was more than ‘just’ a DJ set.  Usually DJ sets are just a way of getting a ‘name’ artist onto a bill without the artist having to really perform, just press some buttons in between acts, but that is not the case with a Chromeo DJ set.  P-Thugg (Patrick Gemayel) and Dave 1 (David Macklovitch) fused rock guitars with electronic instruments before everyone was doing it, and more than know their way around a turntable or two.  Their DJ set was a full-fledged set, not in between filler material.  The only regret was that we didn’t get to hear they play from next year’s highly anticipated new album, White Women. 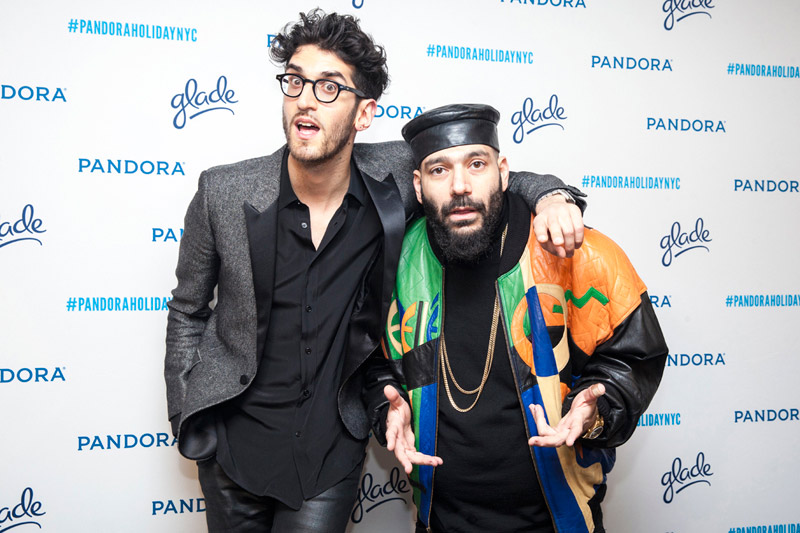 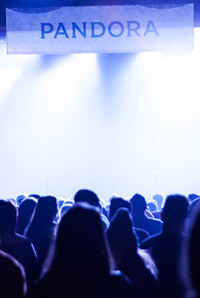 Still a relatively new service and technology, Pandora Radio has its criticisms, from a too small pool of songs to the debate over the Internet Radio Fairness Act (a proposed bill dealing with artist royalties from online plays that Pandora supports but a lot of artists don’t, which is all above your correspondent’s head…), but just making money in today’s highly unsettled music industry is an accomplishment in itself.  And it’s not making money off the same old songs you’ve heard a million times before, aged rockers or boy bands, but off of recommending new music that you might not have heard but very well could like. 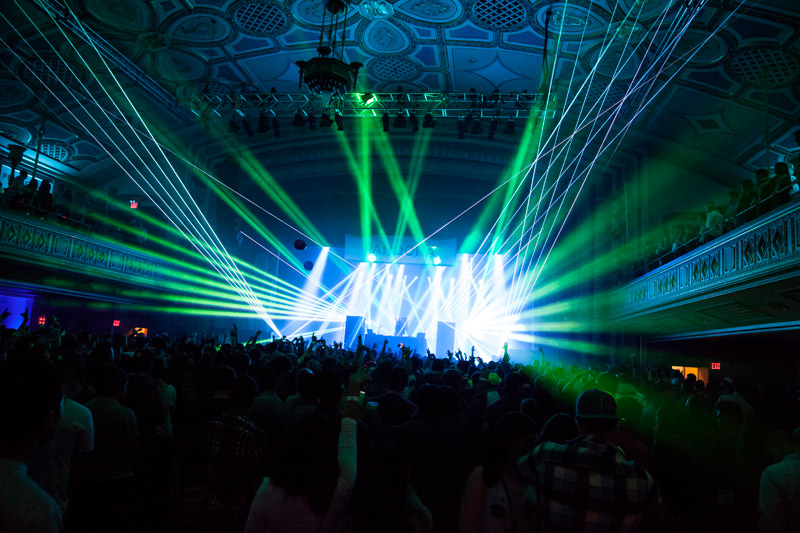