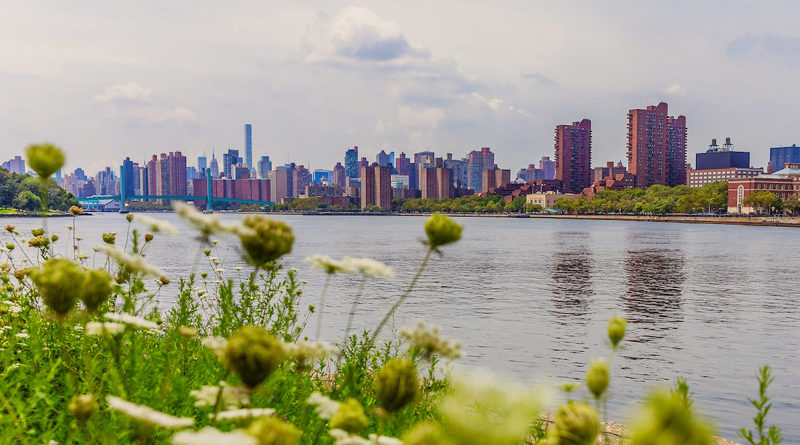 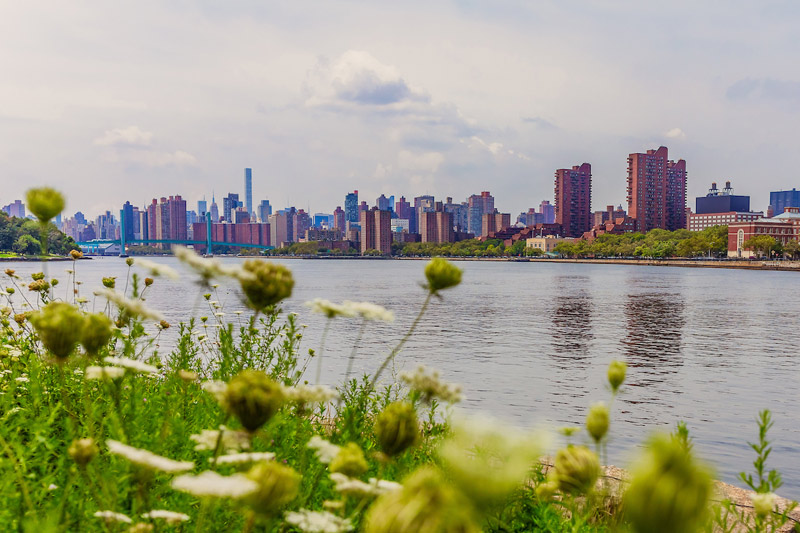 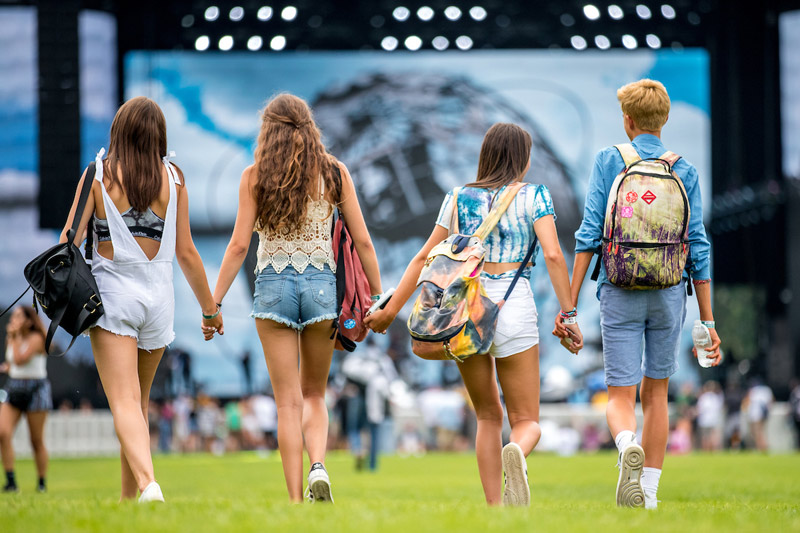 Usually at festivals, the big days are Saturday & Sunday, the weekend, while Friday is the add-on extra, with lighter crowds because some people have to work, and acts that aren’t quite as big a draw. But this was not the case at Panorama ’17. It was only headliner Frank Ocean’s second performance of the year, after his debut the prior weekend at FYF Fest in Los Angeles and cancelling earlier festival headline spots. Plus prior main stage act Solange Knowles has only been getting bigger & bigger.

Early birds at the festival ground’s eastern entrance arriving prior to the twelve o’clock opening found long winding lines that stretched the length of several hundred feet from the security check-point to the public bus drop off area. Those of who had VIP bracelets, and a keen eye to spot the signage directing them, were able to bypass this general admission queue for a quicker access. Once the festival gates officially opened many fans flooded the barricaded switchback line leading to Frank Ocean’s one-day-only merch booth while others ran to be closest to the main stage’s barricades. Indeed, there appeared to be many people with just tickets for that day, rather than all weekend, more so than during the actual weekend. 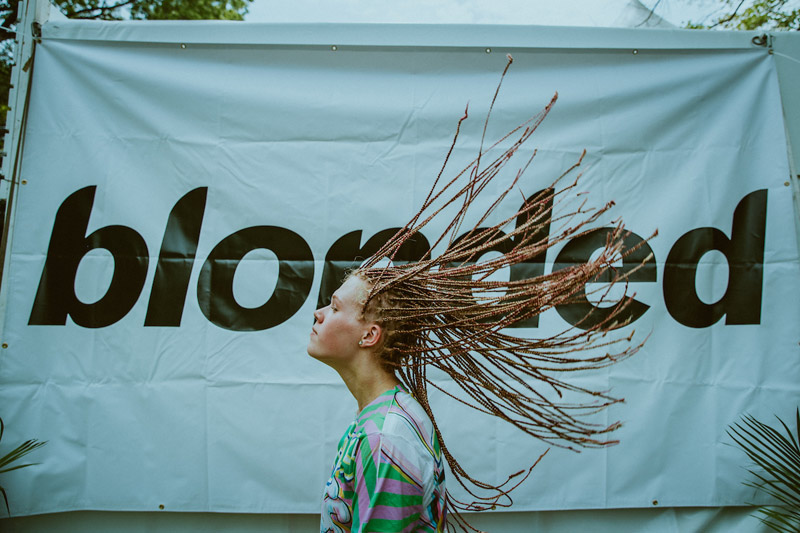 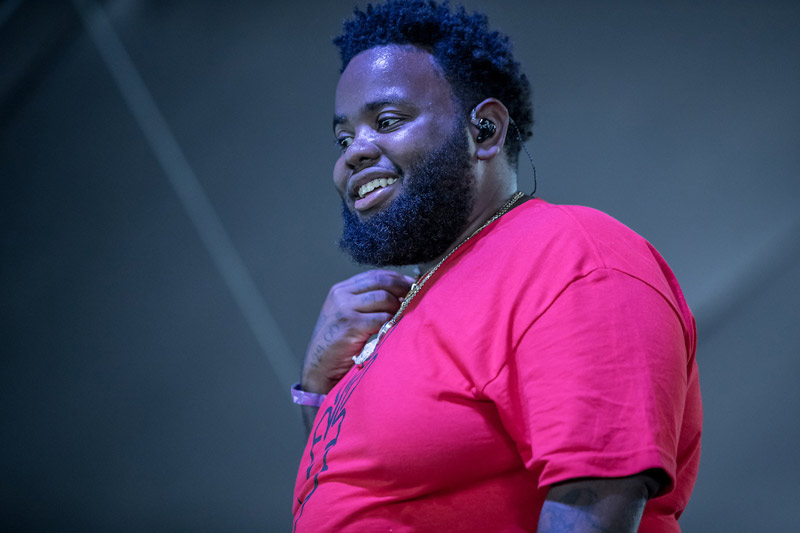 Performing at his first New York festival, Houston, Texas based rapper 24HRS garnered a decently sized crowd considering his early set time. As the first main act on the canopied stage of the ‘Pavilion’, he elicited the participative audience to bounce, bounce, bounce to the beats. 24HRS sported a hooded sweatshirt despite the warm temperature and sang auto-tuned lyrics over previously recorded tracks. Guest rappers had the sound engineers working out audio issues, as their microphones were not passing signal for a handful of stanzas. 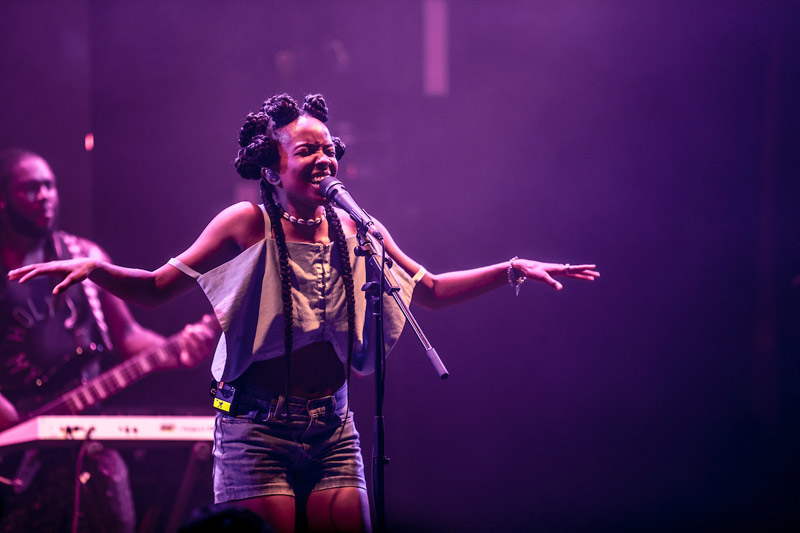 Inside the fully enclosed stage setup of the ‘Parlor’ singer/songwriter Jamila Woods, backed by a live band, drew a sizable audience. The R&B styling and poetic spoken word introductions offered a soulful oasis in those early afternoon hours. Under the slowly swirling disco balls some swayed to the soothing sounds while a small few passed a contraband hairbrush shaped flask amongst themselves. 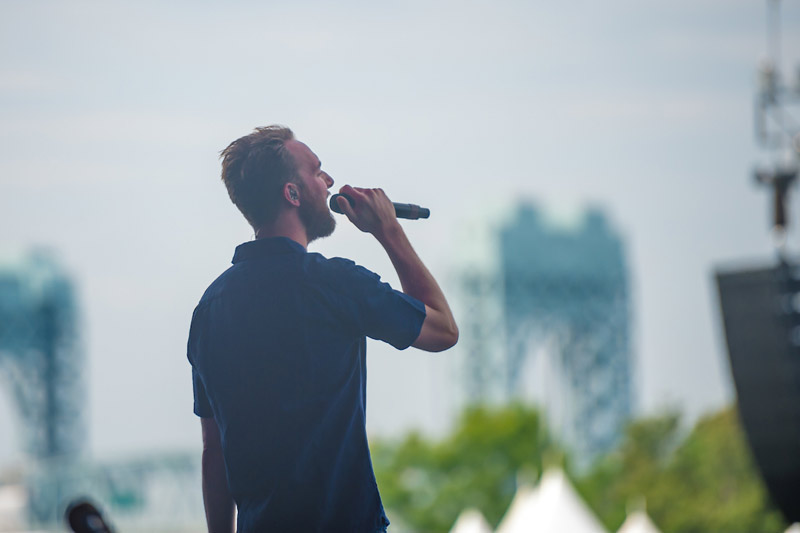 Honne opened the main ‘Panorama’ stage with their radio-friendly electro-pop sound to a sea of faces on the main lawn. The group had all of the trappings of a modern-day electro act, with an addition of a back-up singer who added another visual layer with her dance moves. The band overlooked a grassy area that split the general admission section from the VIP (with the larger portion dedicated for GA). While the VIP had a healthy turnout, the main section was also well populated for their performance. 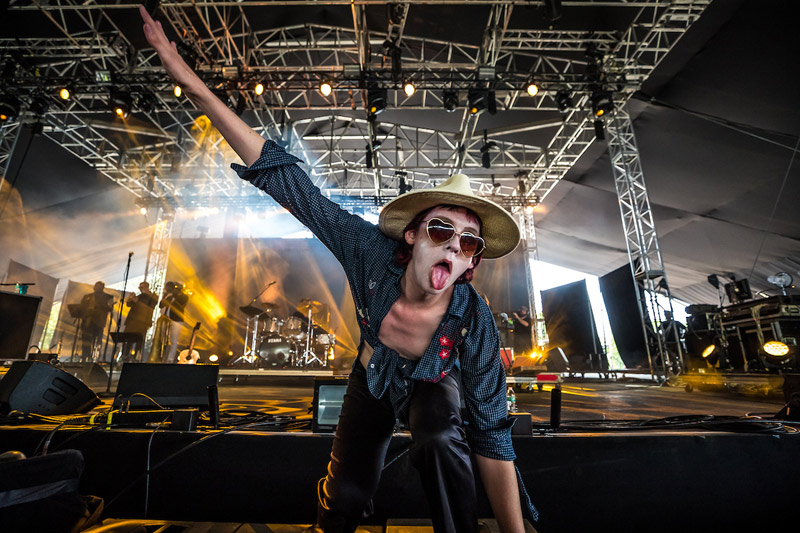 The wonderfully fashionable frontman Sam France of Foxygen brought immense style to The Pavilion. The posturing and pantomiming gestures perfectly complimented the gabby singer’s in interstitial song commentary. Occasionally ribbing the photographers and the audience alike (“Thank you for all wearing your cheetah print”), the group set a high standard in regards to creating a fascinating spectacle. 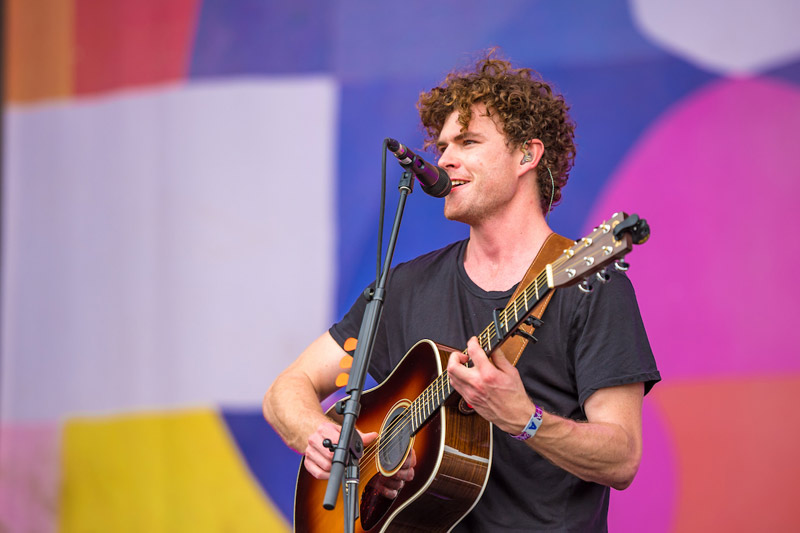 Australia’s Vance Joy ably performed in his mid-afternoon Panorama Stage slot, fitting in as someone you’d always meant to check out, and now was a good time. While he closed with his big hit, “Riptide”, extra special was his cover of Paul Simon’s iconic “You Can Call Me Al” single from the iconic Graceland (QRO deluxe edition review) – though for some reason mixed in a few chorus verses of Omi’s “Cheerleader”. Don’t mess with a classic, kid… 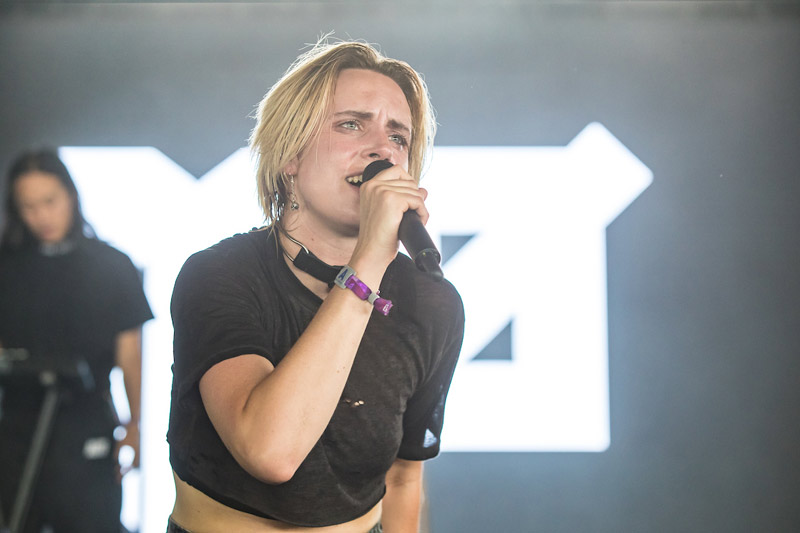 Not messing around was Denmark’s MØ. There may have been a canopy over The Pavilion, providing some much needed shade for crowd & artists, but the maiden MØ was bringing sweaty, emotional pop. The maidens in the audience particularly loved it, her emotional empower (and great sweaty dancing from MØ). 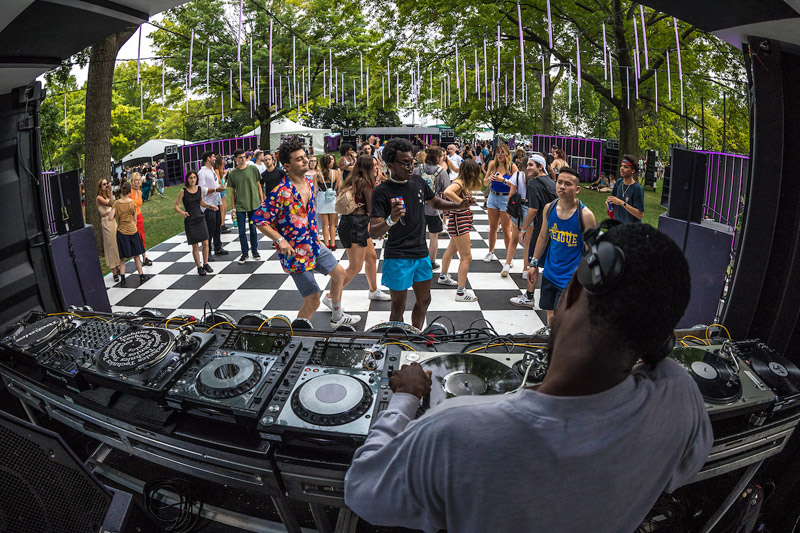 ‘The Point’, the stage strictly dedicated to the DJ artists, was laid out in a space closest to the eastern festival entrance. A checkered dance floor abutted the DJ booth where artists Working Women, Jane Fitz, Jay Daniel, Omar-S, Marcellus Pittman, and Theo Parrish were set to spin throughout the first day. Encircling the dance floor were mirrored monoliths that competed with the attention of the audience; the lure of dancing versus the lure of a high quality selfie created an attention divide in the earlier hours. The dance crowd fluctuated size at any given moment from a few small couples to upwards of fifty people. As the midday crowd arrived the dance floor grew in popularity. 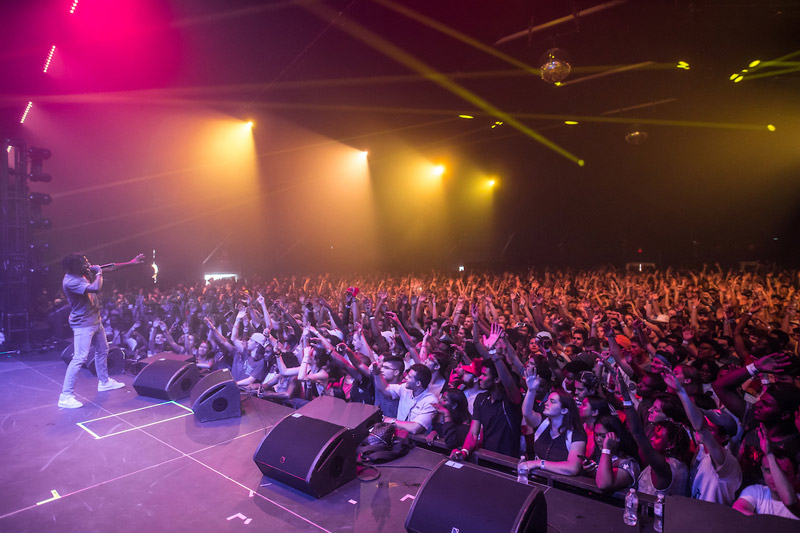 Separate GA and VIP entrances, which led to the Isaiah Rashad performance inside The Parlor, were flooded with people held back by security due to capacity limitations. Those inside the space sweat it out as an oppressive mugginess blanketed the scores of fans that waved their hands and rocked the tent. Equally feeling the heat which resulting in Rashad requested water bottles from those backstage to be passed around to help cool down the audience. As he jumped, spun, and ran across the stage the audience climbed the rear speaker and barricades in effort to gain a better vantage point.

Approximately thirty minutes into the raucous set, the music promptly cut out and announcements were asked to evacuate the space. The audience cleared out as the result of a partial floor collapse that left no apparent injuries. The severity of the event instantly raised questions about the following acts scheduled for the evening (Cherry Glazerr, Breakbot, DJ Shadow) that was unfortunately answered with those acts being cancelled forthwith with no word of rescheduling. 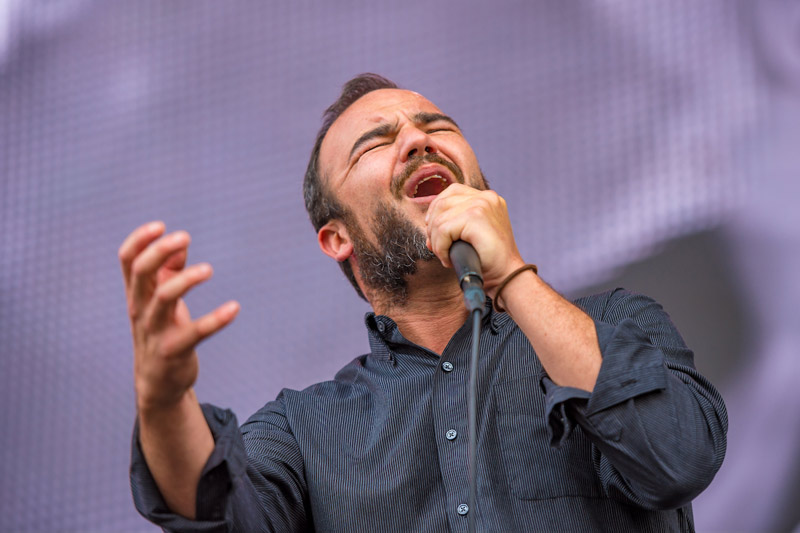 Future Islands have always interesting crossed genre lines, being loved in indie circles, yet their electro-dance pop also fit in well at the more mainstream Panorama. Perhaps it’s because frontman Samuel T. Herring does it all with a smirk, up there on the big screen at The Panorama Stage. 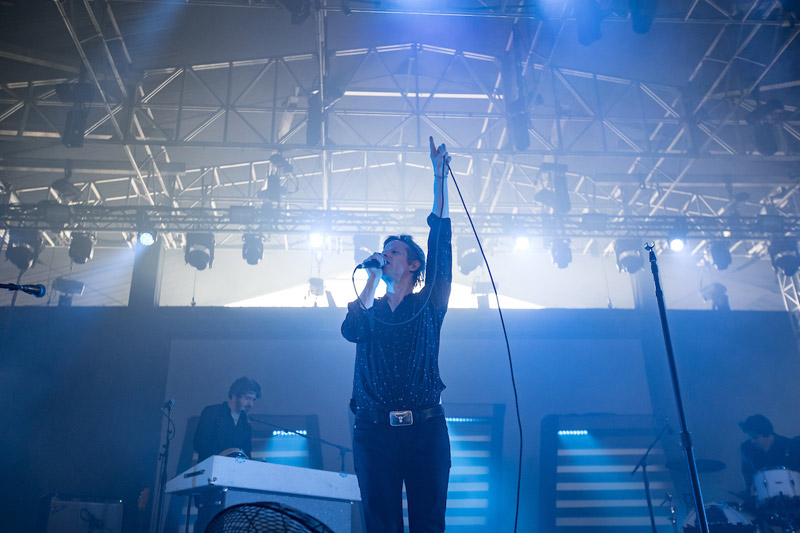 Alt-veterans Spoon have also reached well into mainstream appeal, with a signature cool. But perhaps too cool? Newest albums Hot Thoughts (QRO review) and They Want My Soul (QRO review) are confident records, but at Panorama it all translated into a performance that was more confidence than energy, and not enough chance to have fun. Maybe it was a good introduction at The Pavilion to today’s Spoon, to those who didn’t know them, but also was not satisfying enough for long-term (albeit hard thus hard to satisfy) fans. And as good as “The Underdog” is, it’s still needs horns. 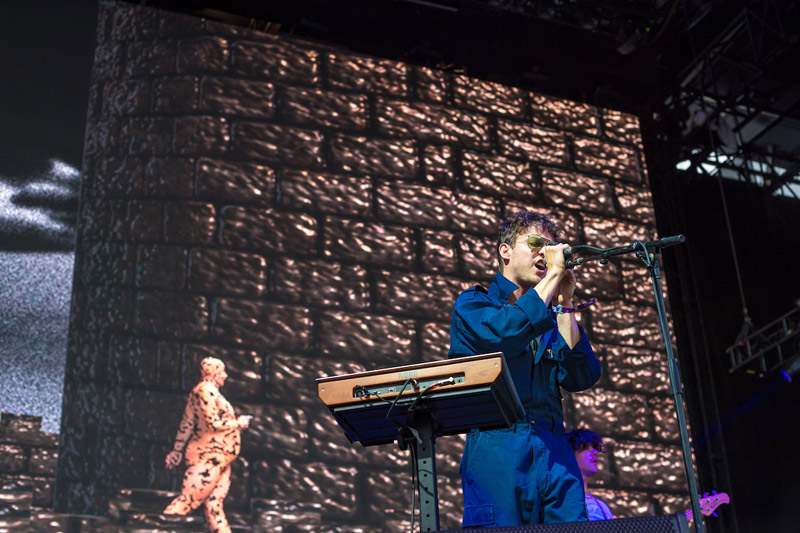 More living up to expectations, if not exceeding them, were MGMT. Since their break out, they’ve shifted into a decidedly psychedelic vein, which was on full display at the Panorama Stage. That includes their trippy videos behind them on the big screens, but using them for that meant that one couldn’t see the band nearly as well, particularly as it was still very bright out, so no spotlights. And the biggest reactions were still for pieces like “Electric Feel” from 2007 breakthrough Oracular Spectacular. 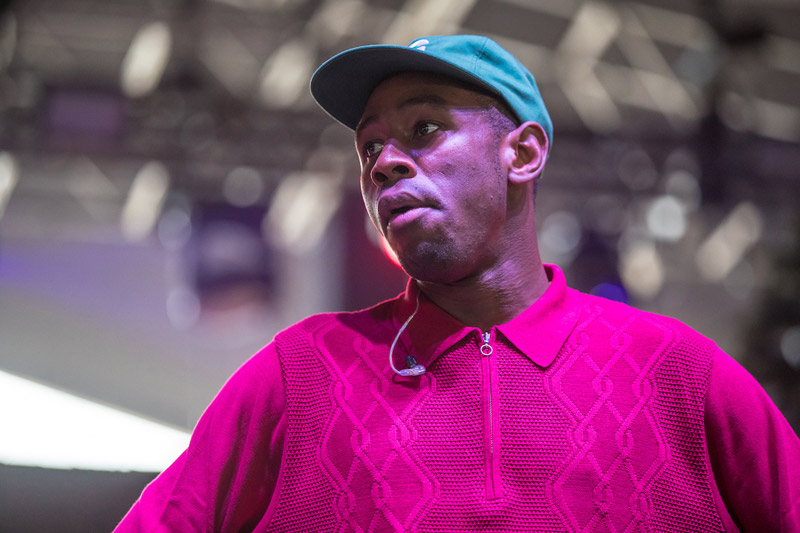 The crowds flocked en masse to Tyler, The Creator at The Pavilion.  Chants of “Tyler, Tyler” filled the air as raised phones caught the artist taking the stage. “Get your pictures now,” the rapper told the crowd before exploding into a high-energy set. Raising the overall energy level of the festival with a vigorous stage show, the crowd reciprocated on the dance floor as some escaped the crush over the stage-front barricade. Slowing it down some and delving into some slower hits Tyler, the Creator ruminated, “I want to score a Disney movie so bad, dude. Doesn’t that sound like a love song from a Disney movie?…” 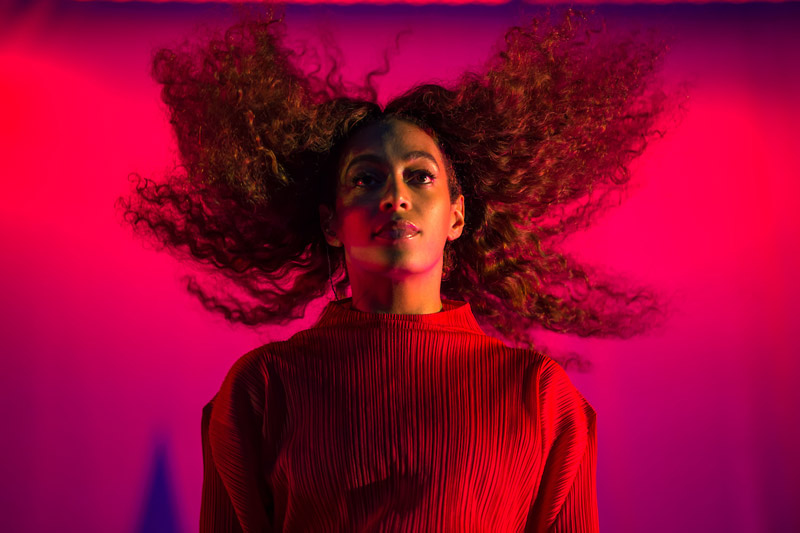 Even with Frank Ocean’s much-buzzed headlining spot, Solange had a lot of attention leading into the day. Last year’s A Seat At the Table fully took her out of her sister Beyoncé’s shadow for anyone who still hadn’t been paying attention, and she is known for her artistic performances. Albeit sometimes too artistic, verging on taking herself too seriously; her last NYC event was at The Guggenheim (QRO venue review), and was dubbed “Solange: An Ode To” – so that would be an ode to herself? Yet her Panorama Stage set saw her one amongst her many other performers, all in a red-orange, from clothes to backing video, even the sky. Yes, it was choreographed, from the hair whipping onward, but it didn’t feel forced like one might have expected. 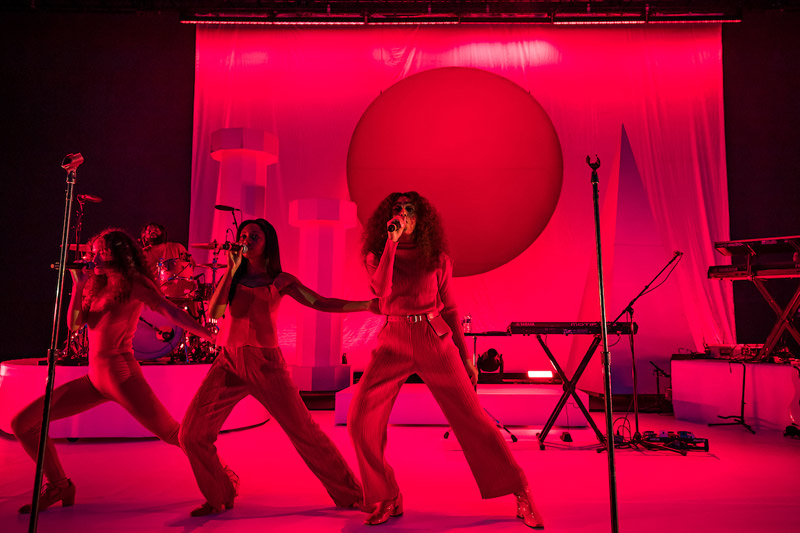 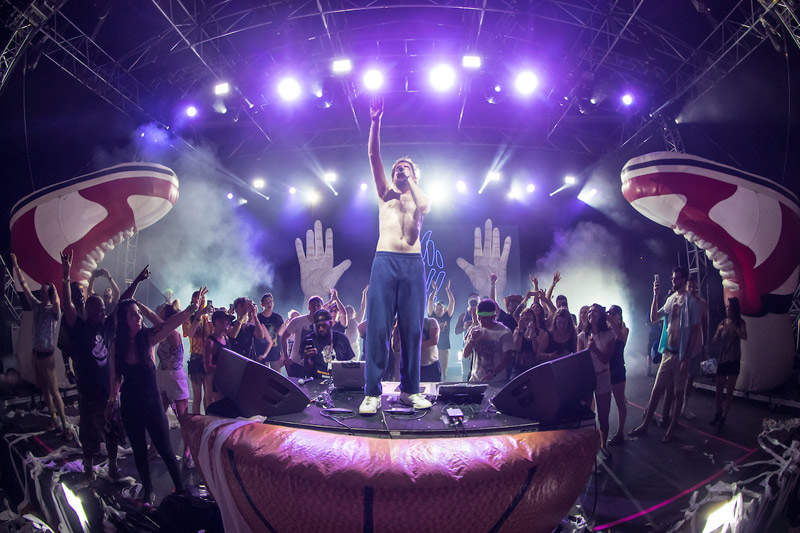 Girl Talk began closing out Friday night’s Pavilion to a remarkably small crowd. Unfortunately squeezed between two of today’s largest acts, the mash-up artist drew an ever-increasing audience to his ridiculously playful stage show. Making up for the artist’s understandable immobility (as he is almost always within arms reach of his computer) a throng of fans danced on stage as stagehands blew streams of toilet paper into the crowd utilizing repurposed leaf-blowers contraptions. Compressed air cannons fired jets of smoke into the air while balloons rained down from above. 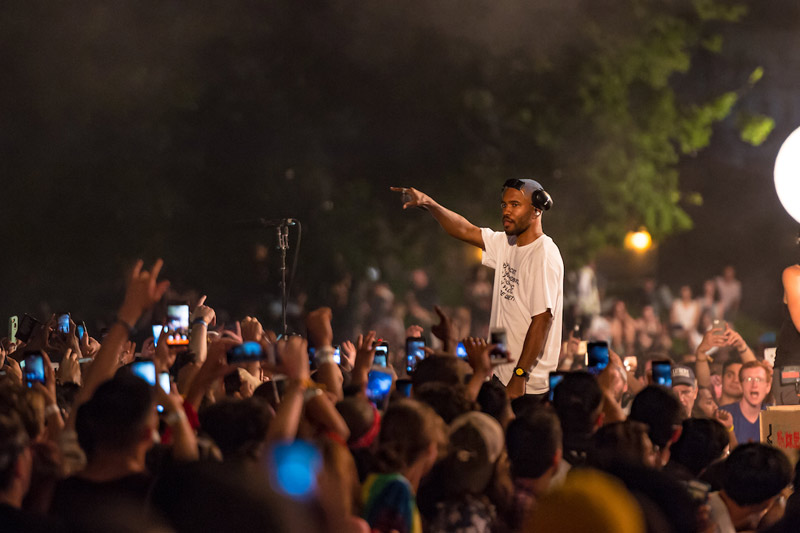 Many people have already written & talked about Frank Ocean’s headlining performance at Panorama. The run-up had more buzz than you could shake a stick at, with the first performance at Los Angeles FYF Fest the weekend prior (QRO recap) serving as the West Coast debut to this East Coast debut (okay, that one did have Brad Pitt…). Instead of doing the giant spectacle that is expected for the big headline spot, Ocean stripped down. At times singing completely solo (with the crowd joining in), when the band was there, they were usually seated. There were not big showy numbers but intimacy, with on-stage shots from famed director Spike Jonze that were impressive on the big video screen, at times both larger than life, yet also also up close & personal. Only one song was performed from breakthrough Channel Orange, “Thinkin’ Bout You”. The crowd stretched far, far back, getting exactly what they came for, yet perhaps not at all what they expected. 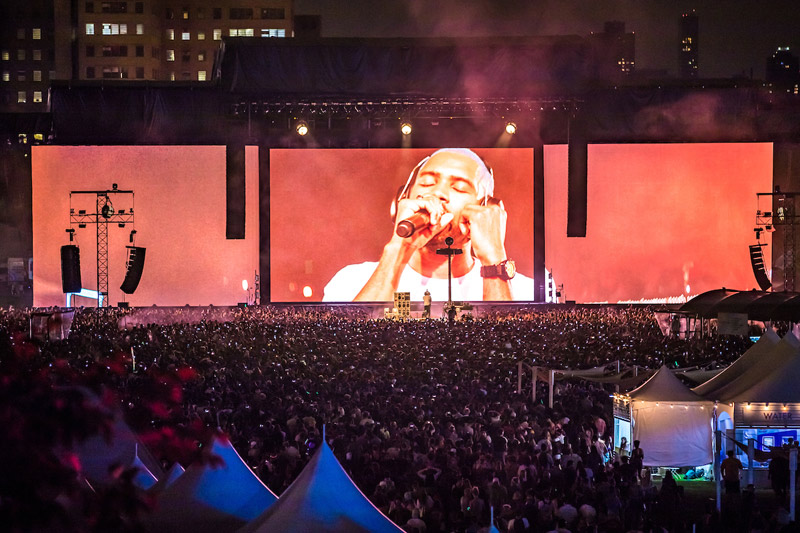 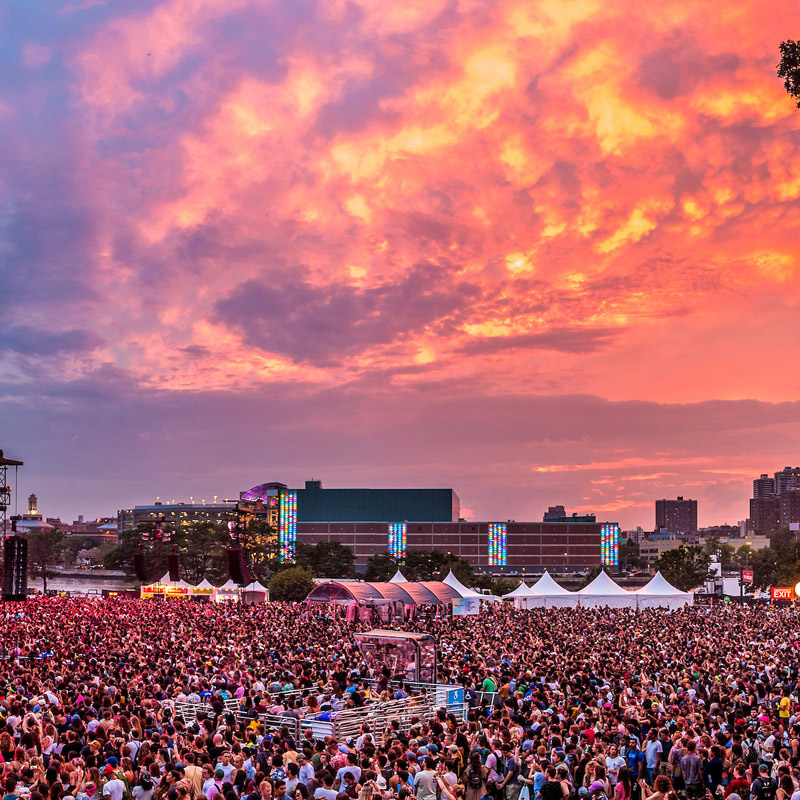