Without a cloud in the clear blue sky the Panorama Festival somehow managed to sidestep a forecasted three days of rain showers.... 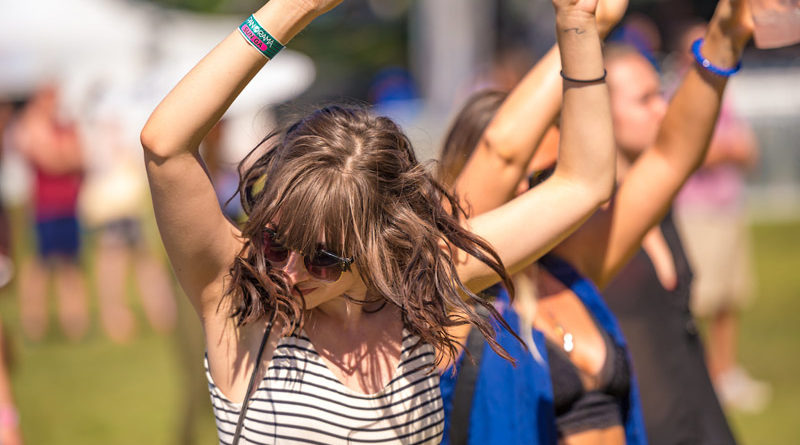 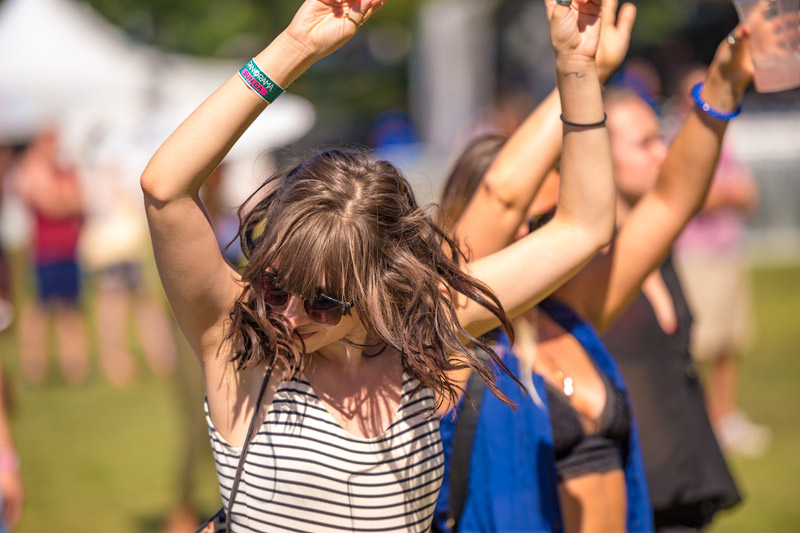 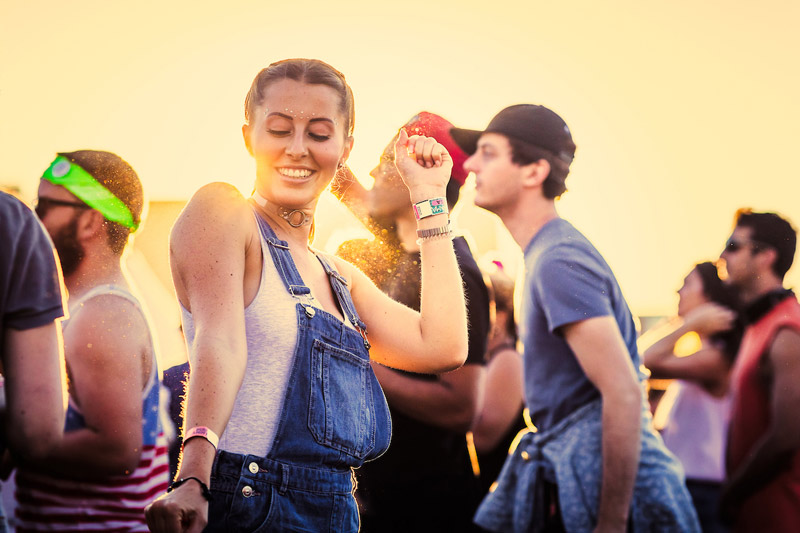 Without a cloud in the clear blue sky the Panorama Festival somehow managed to sidestep a forecasted three days of rain showers. The potential muddiness that could have been was replaced by the dust bowl that became of The Pavilion and surrounding areas. The sun and high-temps was welcomed by the Sunday crowds which brought them a seemingly different view from the previous two days: the black-clad masses adorning the recognizable Nine Inch Nails ‘NIN’ logo.

Manipulating electronic machines and dabbling with drum pads and electric guitars Shallou played to a minimal but high-energy few. The midi-keyboards controlled the thumping and steady dance beats as few somehow danced barefoot over the rock farm of The Pavilion grounds. 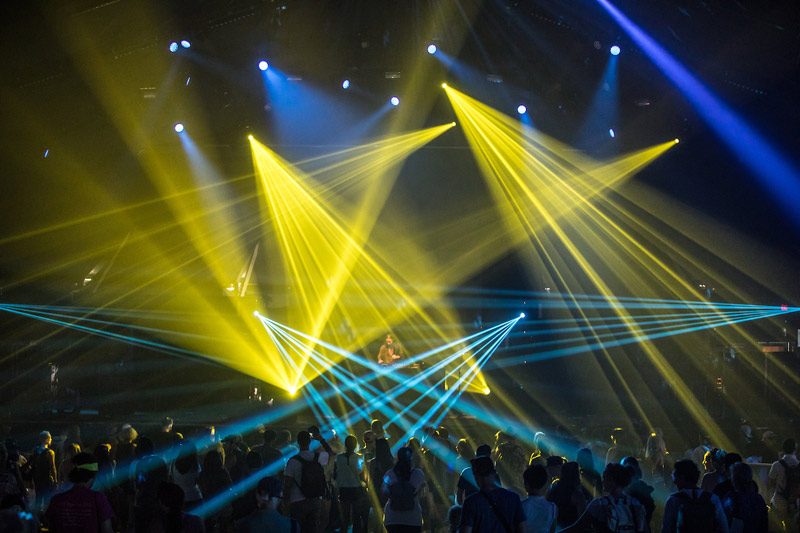 Barricades added to the exterior of The Parlor had concertgoers winding through switchback lines to see White Cliffs play the early afternoon set. The lone DJ spun remixed and mashed up versions of modern jams. 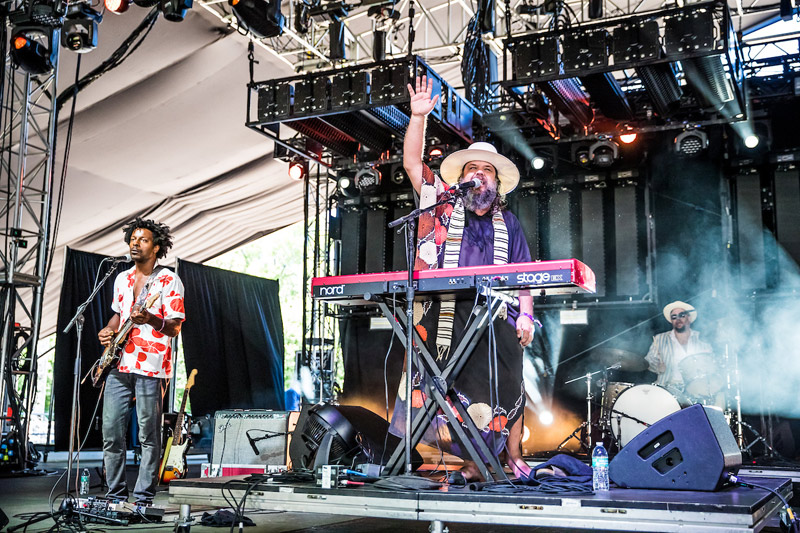 “Are you ready for some church?” Reverend Vince Anderson & The Love Choir exclaimed before tearing into their gospel infused performance at The Pavilion. Championing a twenty-year residency at Brooklyn’s Union Pool (QRO venue review), the singer brought finely crafted politically infused satires about the current Presidential administration citing, “We are living in dark times, can I get an ‘Amen’ to that?” 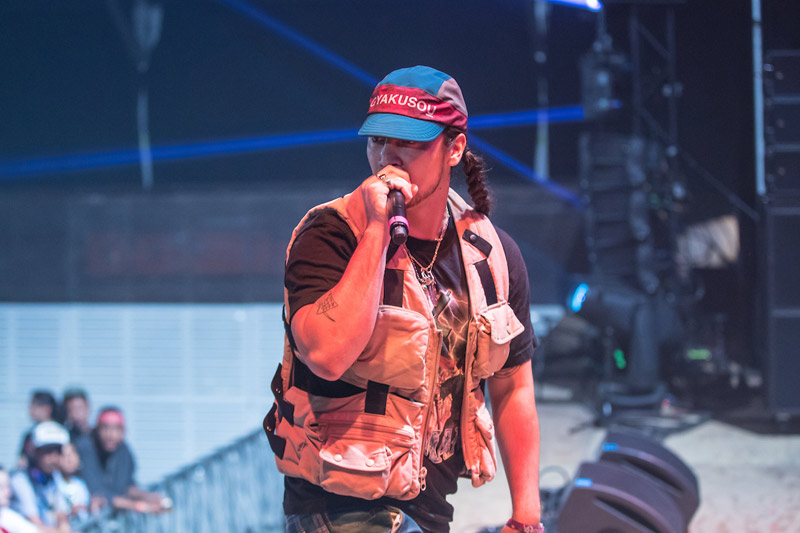 Hip-hop artist Towkio amped up The Parlor dance party in a smoky haze. Playing songs off his impending Rick Rubin production, the singer questioned whether to slow it down or turn it up. At the audience’s request, he kept the songs high-energy, and pulled several ladies onstage to dance back up for his song “Work 4 Me”. 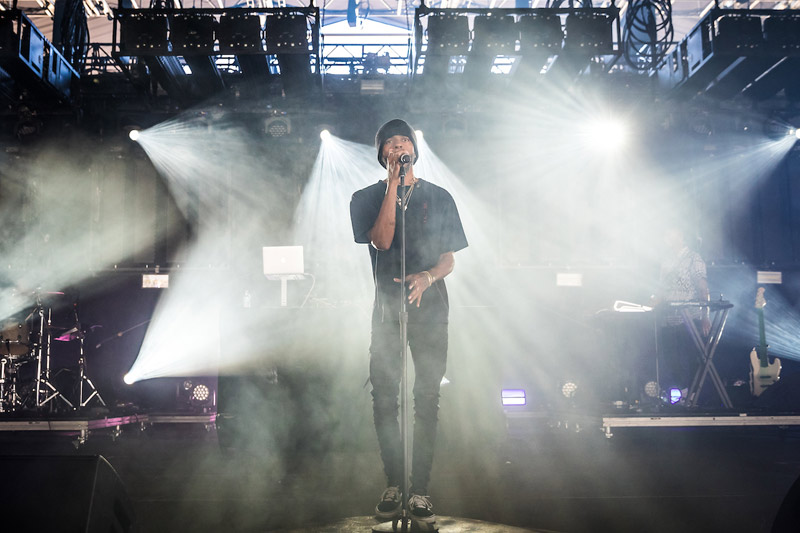 After the DJ warmed up the crowd the backing drums, bass, and keys played an introduction for 6lack to take the stage at The Pavilion. Pronounced ‘black’, the artist rolled out the slower vocal/piano introduction that kicked into the booming bass of the first track. The set list varied in its aural dynamics as the artist paused to share a heartfelt moment with the audience. Citing the shedding of old relationships and old record labels for a change to a new positive perspective, the rapper won the minds and bodies of the crowd. 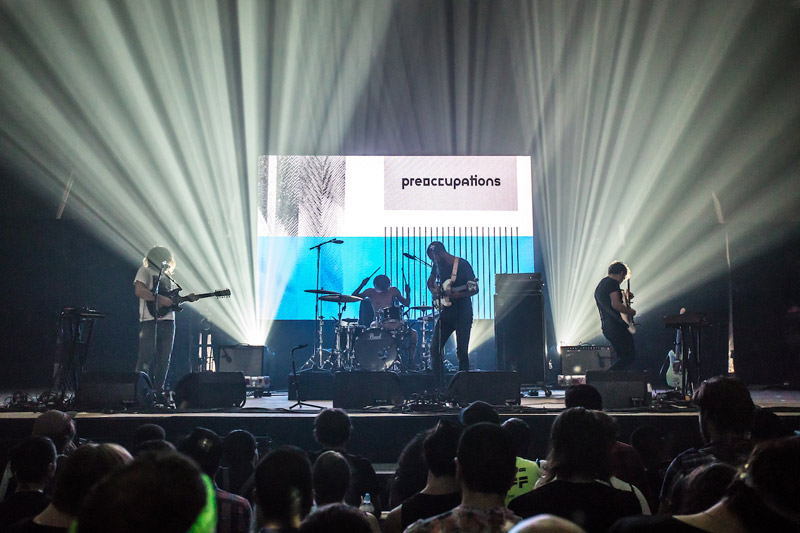 In a very dark Parlor tent, one could barely see Preoccupations on the stage. The Canadian group’s art-punk would seem out of place at Panorama, and it kind of was. They have always seemed a little too precious artiste full of themselves, and are mostly famous for the controversy surrounding their former name, Viet Cong. 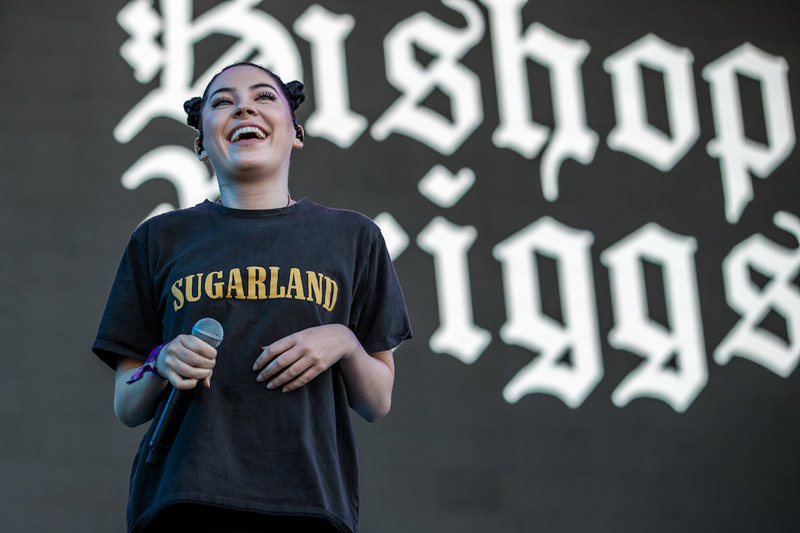 The main Panorama Stage opened with Bishop Briggs. Another alive dance songstress, she was good, but there are many like her out there, and more & more each day. She played “Fire” from her first EP, which was only last year. She also seemed to end her set with ten minutes left to spare on her set time. 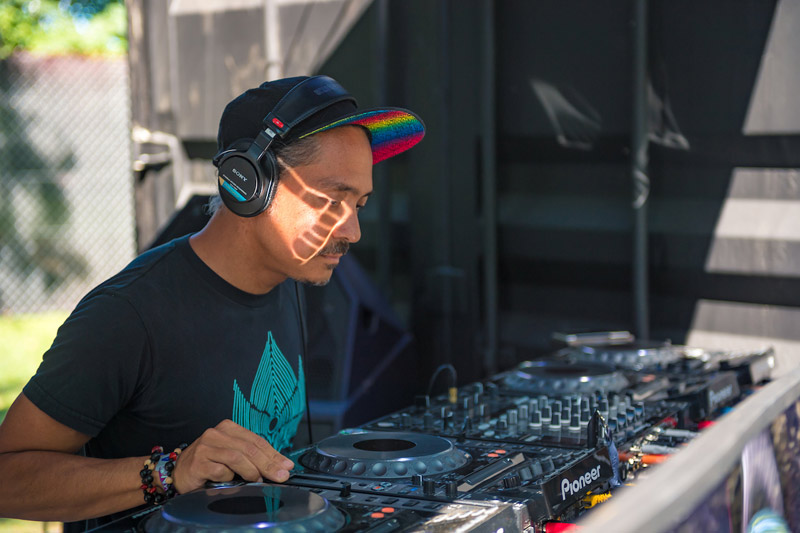 Camped out inside the DJ hut under two parasols Miles Maeda took over from the Point’s morning duo Working Women. The benefit of the clear skies left the following turntablists DJ Heather and Tim Sweeney also to combat the glare of the sun. Nature didn’t stop The Point from being crammed to near capacity in the small open field. The shift into the evening dusk allowed the LED light strips to pop and give the effect of an open-air nightclub for the closing acts of Honey Dijon and headliner Derrick Carter. 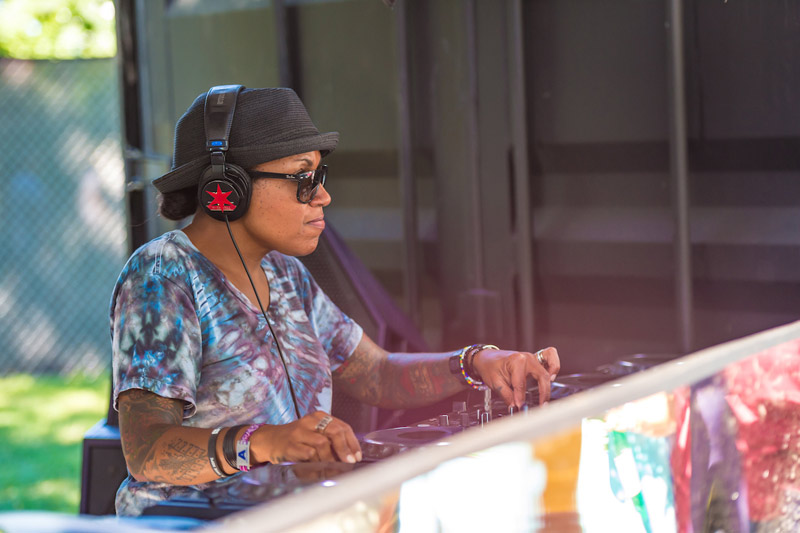 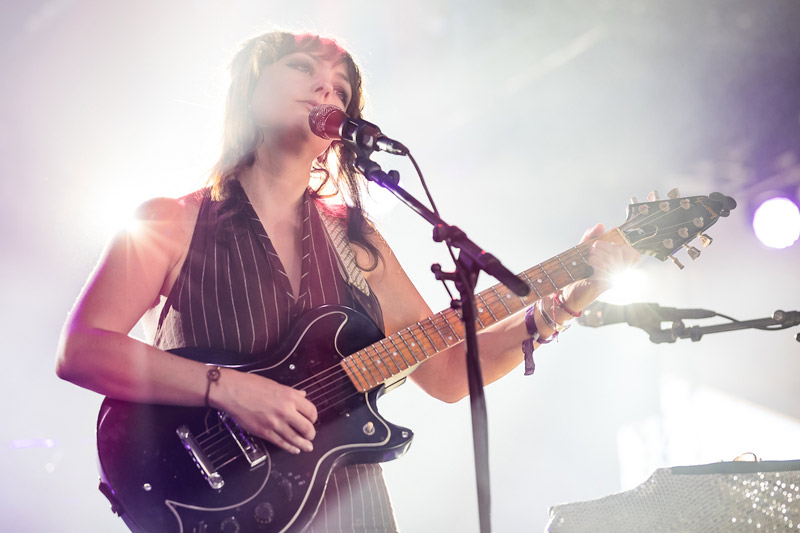 Harkening back to the glory days of ‘50s rock culture, Angel Olsen came onto The Pavilion stage amid a backing band clothed in matching power blue suits. The vintage guitars and Vox amps furthered the nostalgia as the band played through “Shut Up and Kiss Me”. Unperturbed by a little audio issue with her guitar amp the singer teased, “I’m glad you’re getting this on video… I’ll never watch it.” 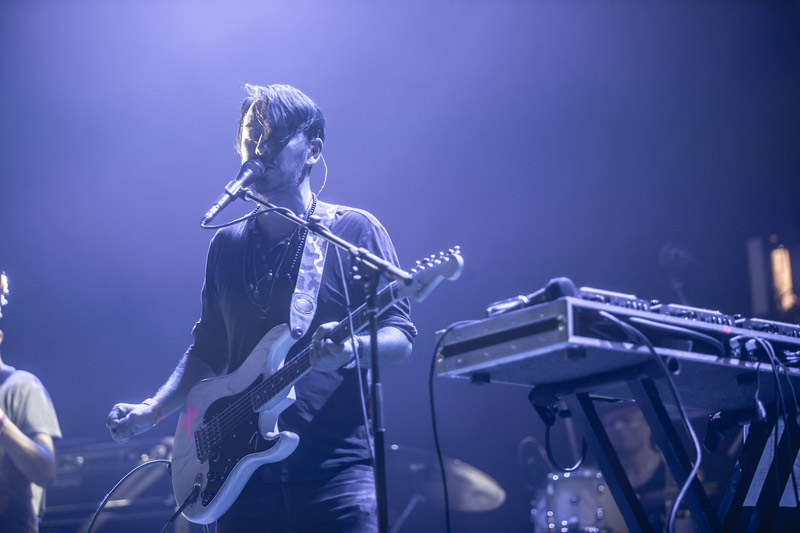 Possibly the non-headlining act with the most interest at Panorama ‘17 was The Parlor’s Dhani Harrison. Son of The Beatle George, while he had previously performed in his band thenewno2 and with Joseph Arthur & Ben Harper as Fistful of Mercy (QRO photos), this was his debut performance under his own name, behind debut solo record, IN///PARALLEL. Playing electronic rock (should have known it would be electronic, based on the all-caps record title with backslashes in it…), including a vocoder song, there was nothing wrong with what he did, but nothing special either, and was likely a disappoint to those who came for the famous name. 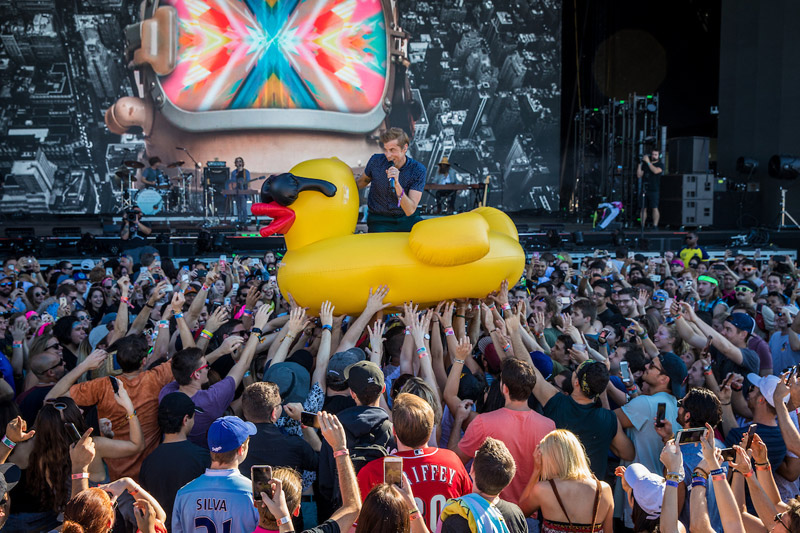 On the big Panorama Stage was Andrew McMahon In the Wilderness, doing big, piano-led emotional pop. McMahon thanked those who were not at the festival that day to see him, for not “killing him out there.” But it was actually a special show, as McMahon paid tribute to his former acts, citing that a member of his prior band Jack’s Mannequin lived nearby, so they did a “mini reunion” for “Dark Blue. He also did a piece from his even earlier band, Something Corporate, name-checking playing punk shows at Irving Plaza (QRO venue review) and the late Roseland Ballroom (QRO venue review) in New York. Multiple times he sang from on top of his piano, and for “Synesthesia” went into the crowd and under the colorful tarp some fans had over themselves. 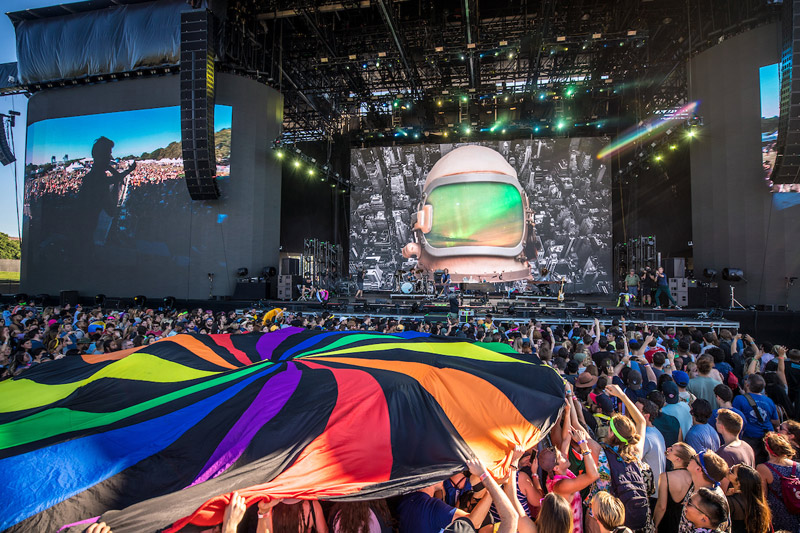 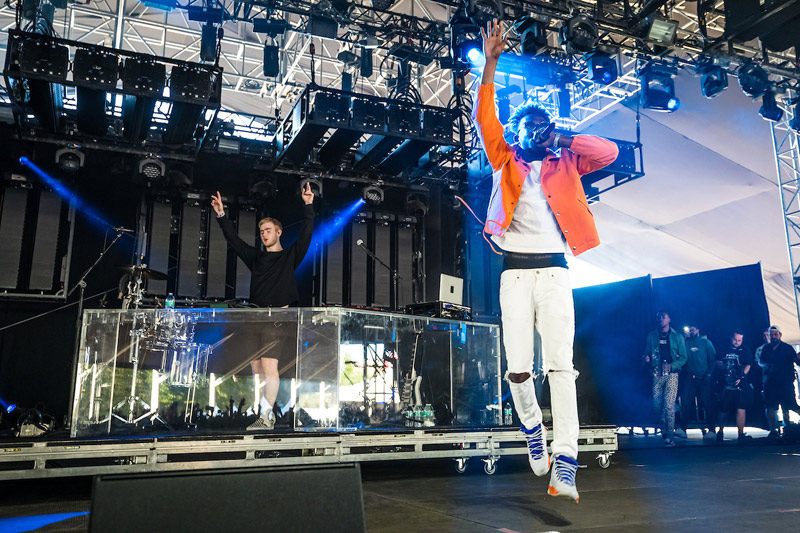 Alex Crossan, known by stage name Mura Masa, offered up trap beats for the dancing-minded audience at The Pavilion. Supported by a twerking MC/dancer on stage the musician station himself behind a Lucite desk featuring a wide array of electronic keyboards, workstations, and drum pads. Flaunting his creativity, the artist played funky phased-out palm-muted guitar riffs along to prerecorded tracks. 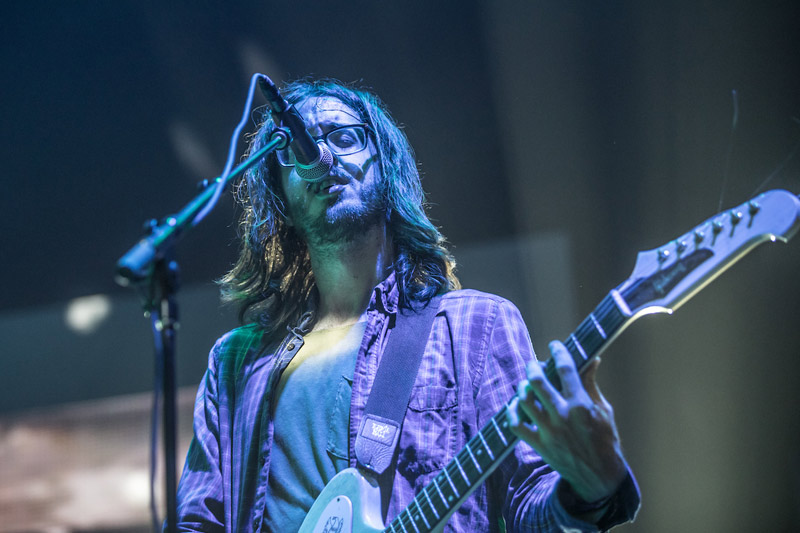 Once again, Cloud Nothings delivered strong, catchy, pressing indie rock. Maybe too pressing, relentless in its push for this more laid-back festival, barely giving a chance to breathe, song after song. And breakthrough “Stay Useless” is still their best song. For some reason projected behind them during the entire set at The Parlor was cult horror b movie Highway To Hell, starring Chad Lowe and Kristy Swanson (though also guest appearance by Alice Cooper, and both Ben & Jerry Stiller…). 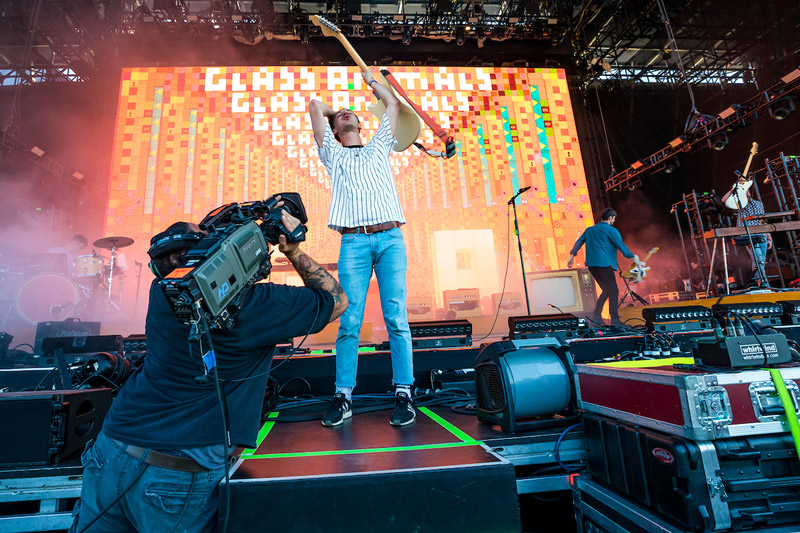 Pulling in the largest crowd of the evening up to that point was Glass Animals at the Panorama Stage. A large cubed light-up GA and spinning bedazzled pineapple made up the majority of the stage decor along with a triply pixelated video backdrop. The quirky musical styling attracted a wily audience who crowd-surfed blow-up aliens as well as adult sized blow-up dolls. Glass Animals frontman Dave Bayley hopped into the audience singing into his microphone while walking through the crowd. 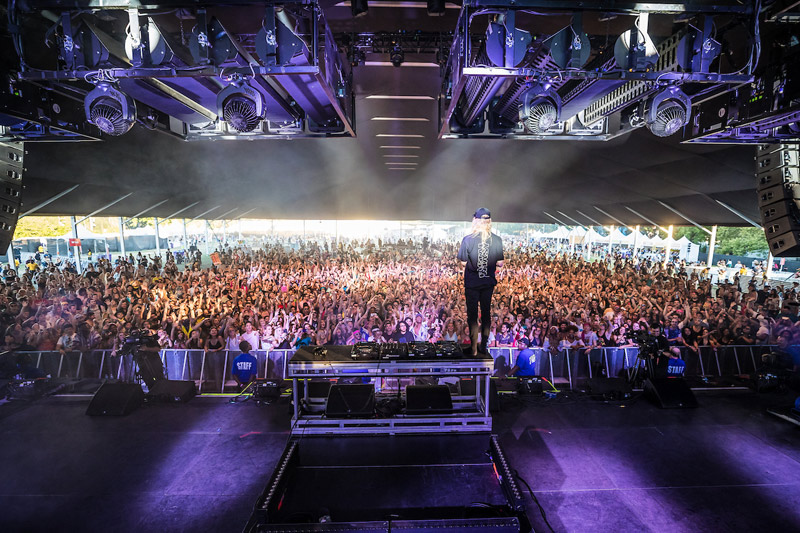 Prior to Cashmere Cat taking the stage at The Pavilion, jungle sounds and chirping birds filled the air. Walking out to prerecorded vocal tracks the one-manned DJ act bounced between four machines situated on a table onstage. Twiddling knobs and tweaking the sound the stark stage show left something to be desired. 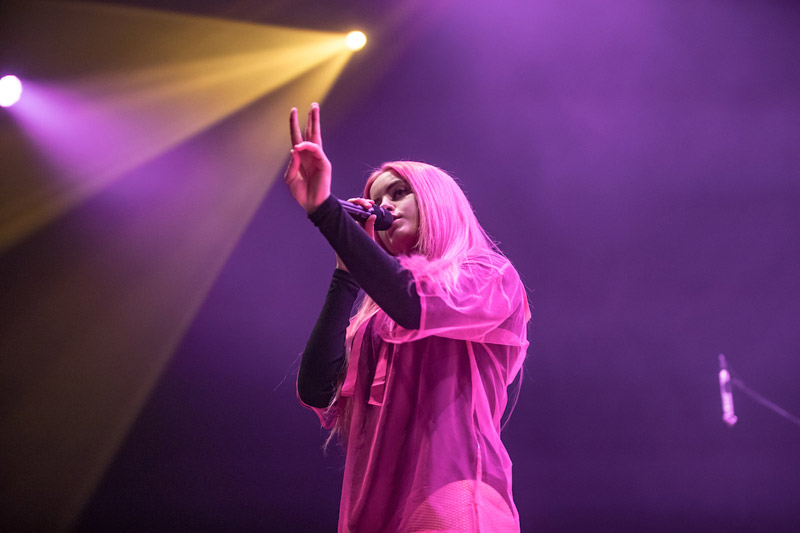 Rocking pink hair and a matching pink top, Kiiara played slick electronic beats as a lower ‘k’ adorned the video screens at The Parlor. Casually strutting her way across the stage the singer the singer capped sexy electric beats played by the backing drummer and keyboardist. 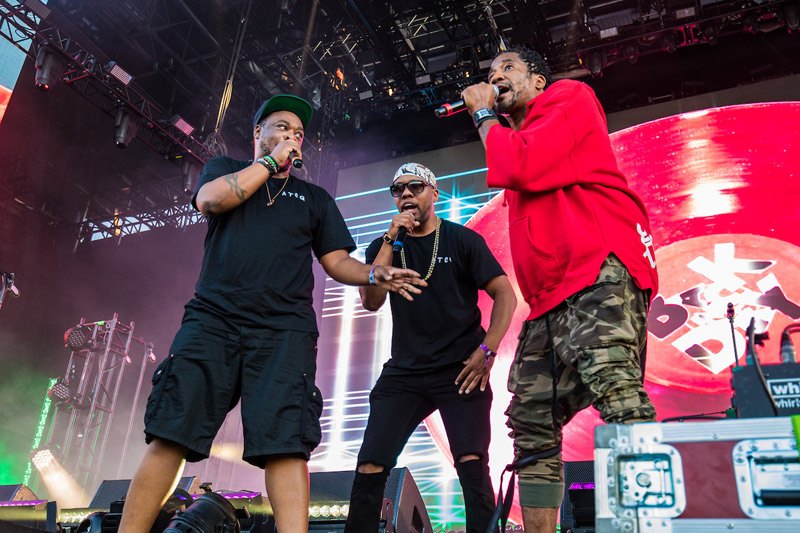 One of the most important sets at Panorama ‘17 was A Tribe Called Quest on the Panorama Stage. Last year, while making the highly acclaimed We Got It From Here… Thank You For Your Service, founding member Phife Dawg passed away. Tributes flowed in to him and the seminal hip-hop act, and the rest of the group announced that this would be it for the Tribe – and that the Panorama performance would be the last by the Tribe in NYC. And the group did tribute right, active and alive, not ossified or repetitive like the endless, long-after-the-fact tributes to dead icons. With Phife’s parents at the show, Tribe were great, getting fists up, and were joined by Coolio for their final song, Service’s killer political single, “We the People”. 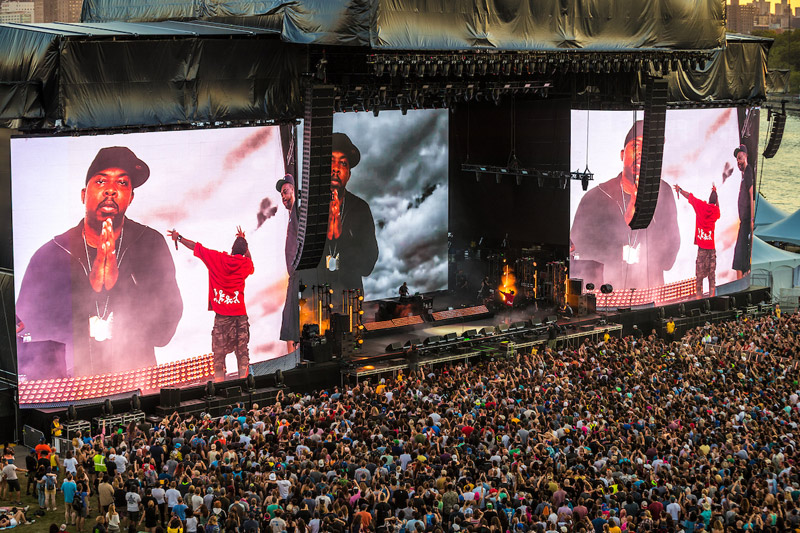 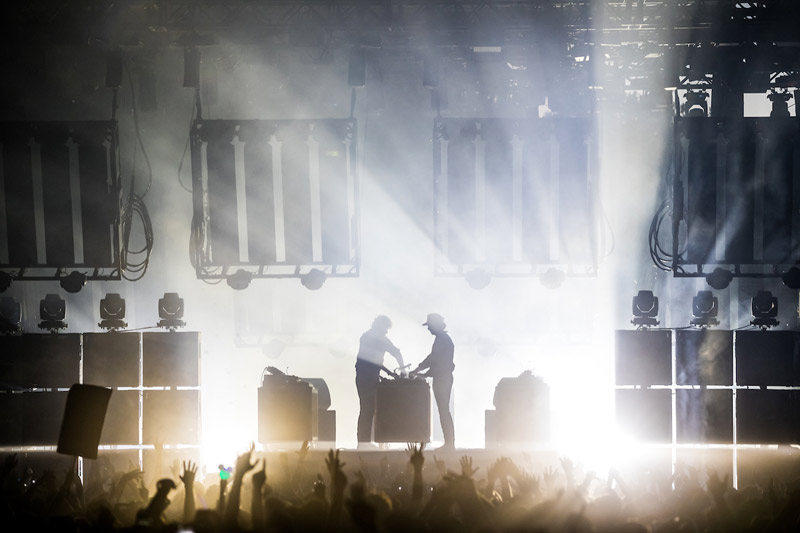 Other than at The Parlor, there had been thankfully very little technical issues at Panorama (Goldenvoice knows how to do festivals) – until the last act at The Pavilion, Justice. Scheduled to start while Tribe was still on, those who swarmed over to The Pavilion after Tribe’s set found the crowd there still waiting. Apparently, a speaker had blown out when Justice started, and the crowd slowly thinned, while loyalists chanted for the French DJ duo to come on. And eventually they did, just over a half hour after they were supposed to start, to a still healthy audience (if not as big as it could have been). Justice played decks with a full light show, but were still a glorified DJ set. 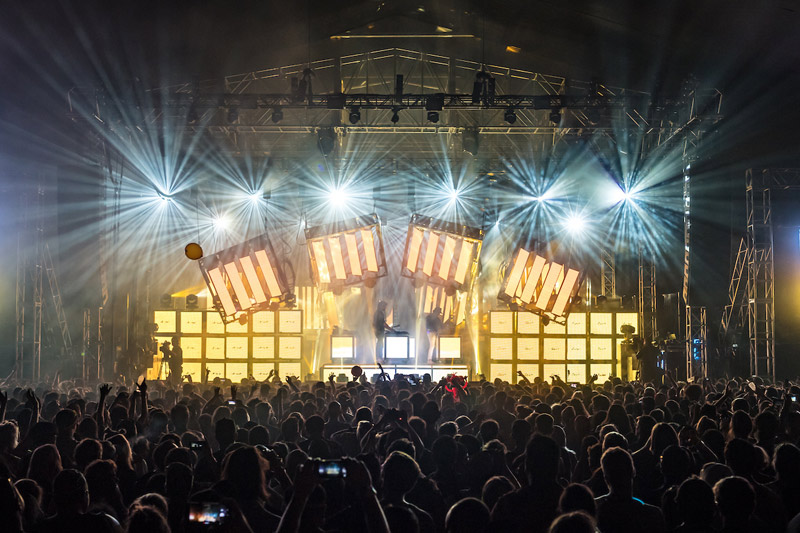 Another duo thudding out bass driven beats, and closing out The Parlor for the 2017 festival was Snakehips. The lights lazed along the ceiling as the English blended a steady stream of pop tracks together. Hands were in the air for the chilled out tunes as the dancing was in full effect. 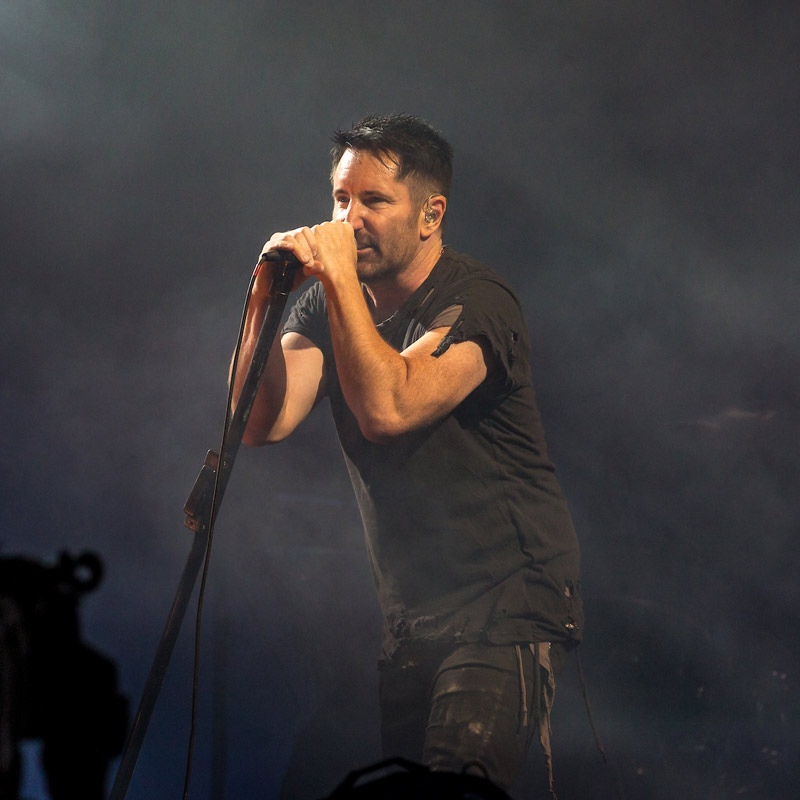 Festival headliners and definitive industrial act Nine Inch Nails gave a highlight reel performance on the Panorama Stage. Trent Reznor, looking as if he came directly from Twin Peaks Bang Bang Bar, in leather coat and sunglasses opened the set with a song from their latest release, Not the Actual Events. Culling songs from their nearly thirty year existence the group stirred up the crowd unlike any act of the festival. With their fourth song’s brutal “March of the Pigs” intro the crowd, exploded into a mosh pits as others pushed their way to the front of the stage.

Reflecting on New York memories and his loss of David Bowie this past year, Reznor eased into a cover from his friend’s album Blackstar (QRO review) with a soft and intimate cover of “I Can’t Give Everything Away”. The group played several energetic selections from their Broken EP as well as from 2005’s With Teeth, while a track from every major album found a way into the nearly ninety minute set. After leaving the stage for a brief moment the group came back for an encore of the soft-spoken song “Hurt” complete with video-screen backdrop playing the images once shown during their 1994 Downward Spiral tour. 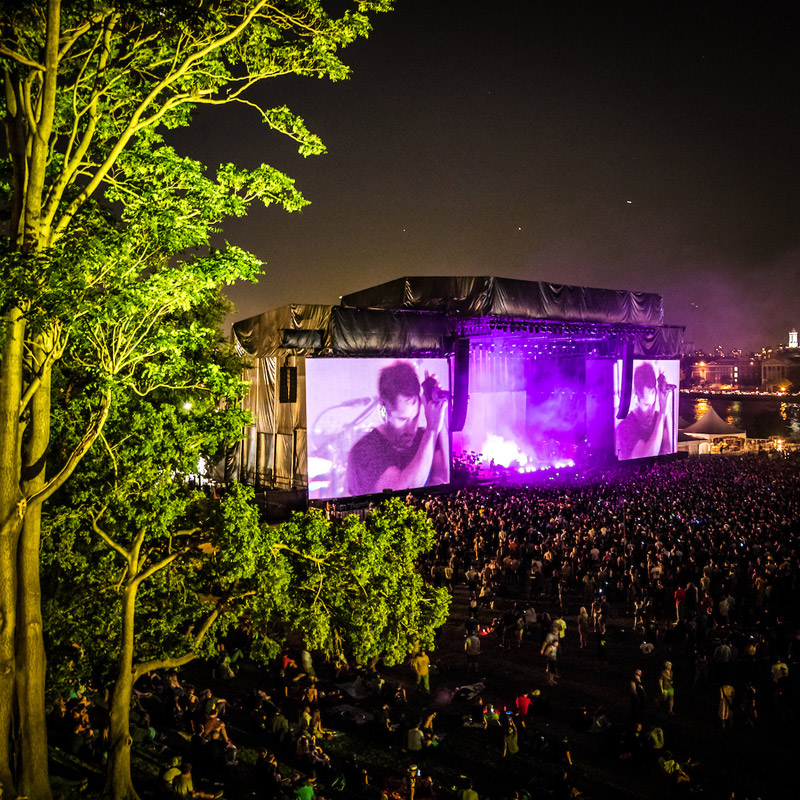 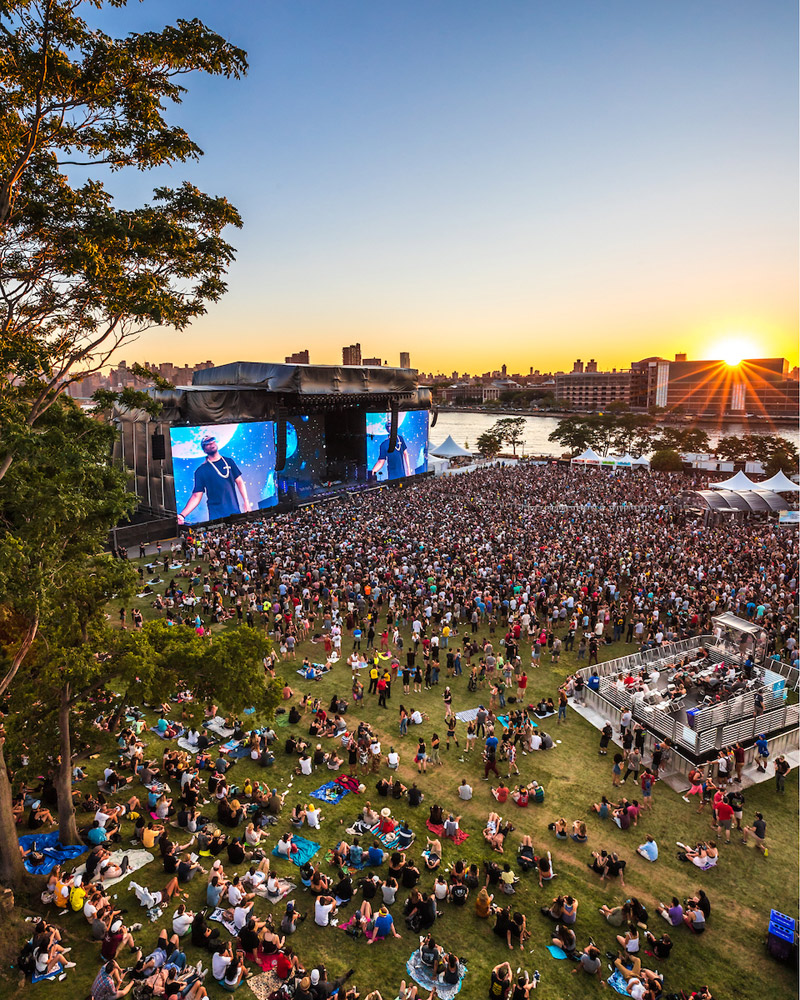