Portugal. The Man brought their domestic Evil Friends tour to a close at the sold out Crystal Ballroom in their hometown of Portland, Oregon.... 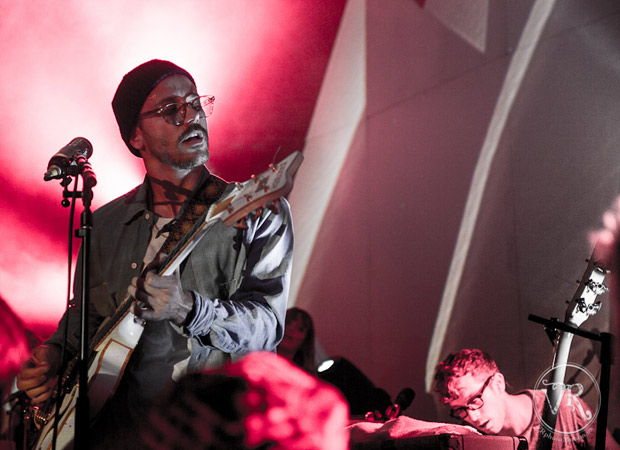 QRO’s review of Portugal. The Man four days earlier at Sellwood Waterfront Park in Portland, OR

Photos of Portugal. The Man at 2013 Boston Calling Music Festival in Boston, MA

Photos of Portugal. The Man at Mystic Theatre in Petaluma, CA on April 11th, 2013

Photos of Portugal. The Man at 2012 Osheaga Music Festival in Montreal, PQ, Canada

Photos of Portugal. The Man at 2012 Camp Bisco in Mariaville, NY

QRO’s review of Portugal. The Man at Corner Hotel in Melbourne, Australia on February 9th, 2012

Photos of Portugal. The Man at Paradise in Boston, MA on October 22nd, 2011

Photos of Portugal. The Man at 2011 Sasquatch! Music Festival in George, WA

Photos of Portugal. The Man at 2010 Haldern Pop Festival in Rees-Haldern, Germany

Photos of Portugal. The Man at 2010 Sasquatch! Music Festival in George, WA

Photos of Portugal. The Man at 2010 Harvest of Hope Festival in St. Augustine, FL

Portugal. The Man brought their domestic Evil Friends (QRO review) tour to a close at the sold out Crystal Ballroom in their hometown of Portland, Oregon on Thursday, July 18th.  Bestowing a huge thanks and gratitude on their family, friends and fans, they acknowledged that they wouldn’t be here without them.  The crowd responded in an eruption of cheering and applause.

Everyone in the packed house was slippery with sweat way before they worked themselves into a frenzy as Portugal. The Man took to the stage.  The house lights dimmed and they opened with “Purple Yellow Red and Blue” just as the house music crescendoed with the Righteous Brothers’ “I Need Your Love” as if it were part of a single movement.  Perfection.

Lights flashed and burst in time to the music – psychedelic colors and lasers panned the room and stage – as the audience reciprocated in cheers of “Ecstasy.”  As the crowd sang and clapped in time, the lyrics of “Purple Yellow Red and Blue” seem to capture the band’s overall aesthetic – one of joyous ecstasy infected with cynical religious illusions and a striving for betterment through accepting that which is literally before oneself and the secrets of the heart:

“All I Wanna do is / Live in ecstasy / I know what’s best for me… All that I needed / Is something to believe in / Because everything just falls in place like that.”

Awash with a hallucinatory light show and coinciding art-work by frontman John Gourley, projected on a huge cut-out of jagged mountain peaks, these psyche-pop rockers brought surging energy and fever to the stage of an already pulsing and steaming room.  And steaming is no exaggeration.  The Crystal Ballroom has absolutely no ventilation or air-conditioning and the floor is spring loaded, creating a perfect storm for the asthmatic or claustrophobic let alone the epileptic.  However everyone seemed to let go and bounce together swapping sweat and enjoyment throughout the almost two-hour set. 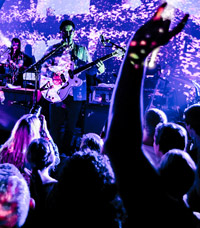 Laden with acid-years-Beatles influences, they jammed and rocked the night into a frenzy with favorites like “So American”, “All Your Light”, and “The Sun” as a rave-like light show and bouncing Crystal Ballroom floor heightened the experience.  Gourley’s trademark falsetto vocals, a slew of synthesizers, and perfect at times and at least boisterous at others, harmonies all melded together into a beautiful, harmonious experience in which the audience sang along, “There’ a madness in us all.”

They closed with a short reprise of “Purple Yellow Red and Blue”, neatly ending their set as they began with the word, “Ecstasy.”  But they didn’t remain off-stage for long as the cheering, stopping, crazed crowd might have crashed the floor right though if they hadn’t returned for the customary encore.

When they returned, Carothers thanked the audience again for their continued support and invited former band members Ryan Neighbors and Jason Sechrist on stage to play an old, live-show favorite: “The Devil” with a run-in with “Helter Skelter”.  Following hugs as Neighbors and Sechrist left the stage, they finished the evening with the apropos “Sleep Forever” merging into “Hey Jude”.

After a sweaty night of light-hearted debauchery, they concluded their set with a sing-a-long to a rendition of “Hey Jude”, which had everyone singing “Na-na-na-nah,” as a huge ‘Thank You, Portland’ graphic projected and flashed behind them.  Buzzed, with the experience, the cool Portland night air was a welcomed relief to the stifling air; however, it seemed everyone would have happily endured the cramped venue all night had they continued to play.

Portugal. The Man playing “The Devil” with a run-in with “Helter Skelter” at the Crystal Ballroom in Portland, OR on July 18th, 2013: