QRO knew Ra Ra Riot when, back in the day, before they got big – and we’re still fans of them today.... 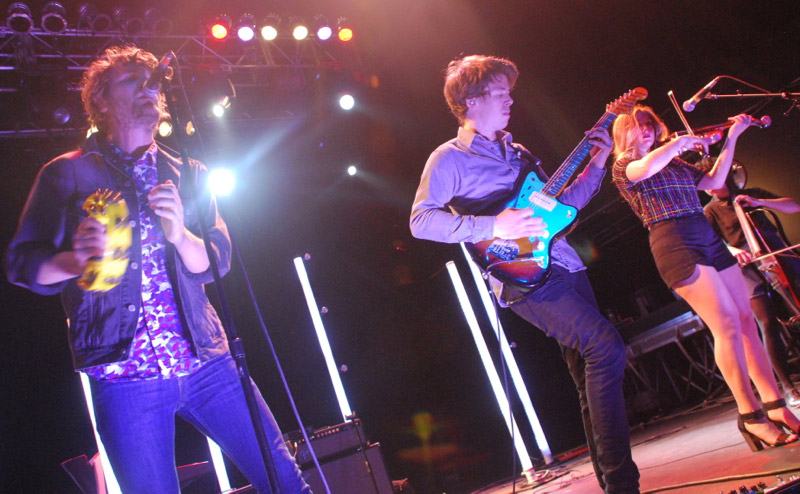 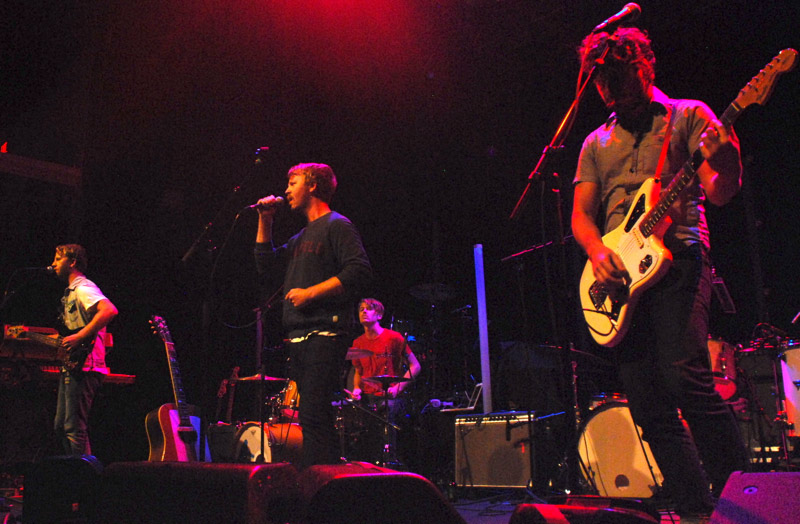 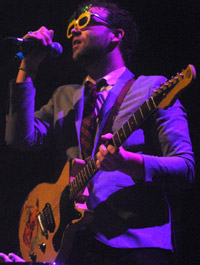 Before Ra Ra Riot came two ccs: Cayucas, then Caveman.  The tropical Cayucas has toured with Ra Ra Riot before (QRO photos), and sounded very Vampire Weekend-y (QRO live review) at Terminal 5 – not necessarily a bad thing, and fitting with RRR (‘V Dubs’ were once slotted before Riot on a bill – QRO photos), but not completely original.  Caveman, meanwhile, have been very original in their two releases, CoCo Beware (QRO review) and this year’s Caveman (QRO review), a little all over the place at first (like frontman Matthew Iwanusa & guitarist Jimmy Carbonetti’s old band, The Subjects – QRO spotlight on), but have since honed their sound down.  At Terminal 5, Caveman had an eighties carry & meaning to their sound, reminiscent of The Temper Trap (QRO live review), but Iwanusa also joked with crowd, coming out in oversized sunglasses, remarking on coming to the place when it was Exit, during all-ages nights (“I came when I was I was sixteen, and eighteen-year-olds would steal my girls.  But not tonight!…”).  The group also had the special addition of Matt Clark on stage, multi-instrumentalist of friends White Rabbits (QRO spotlight on), performing the same ‘utility musician’ job he does in the Rabbits. 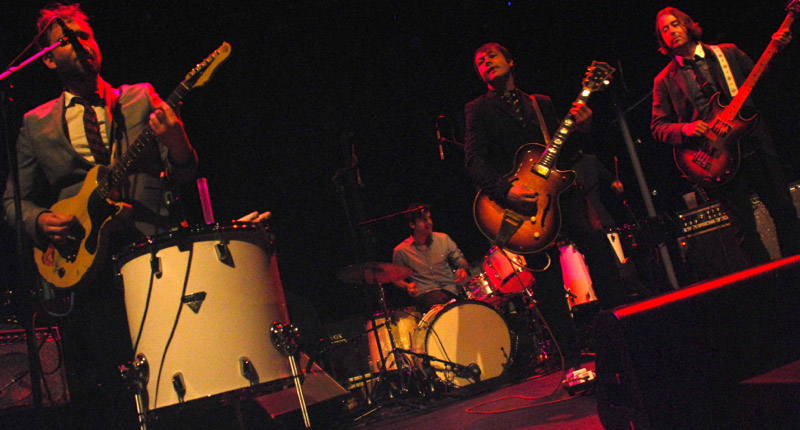 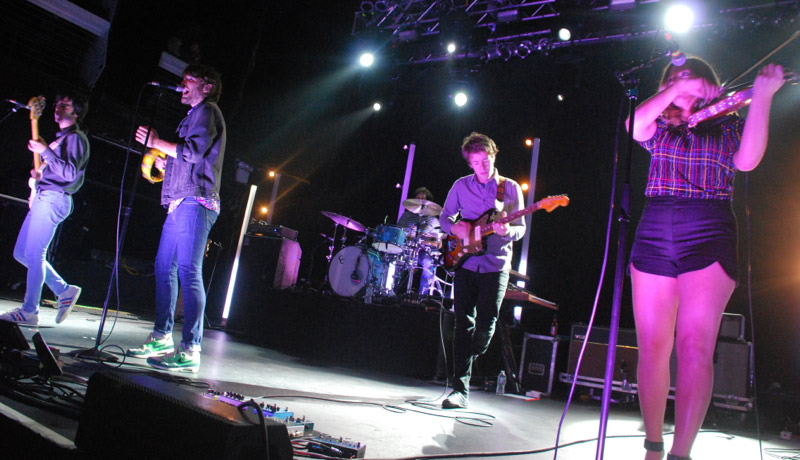 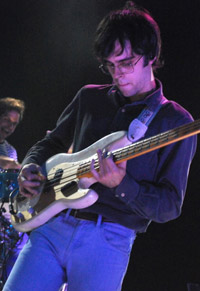 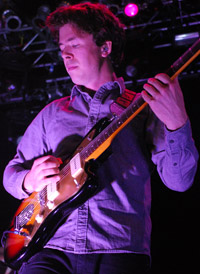 The early part of the set was surprisingly light on Love, with only “Binary Mind” from the new album among the first seven songs.  But this created great momentum, not just with the ‘old hits’ like openers “Each Year” and “Too Dramatic”, but also letting the crowd know that Ra Ra Riot wouldn’t ignore even lesser-known early pieces that might have fallen out of their live repertoire, such as “St. Peter’s Day Festival” (written by their late drummer John Pike, who sadly passed away right before the band started to get noticed). 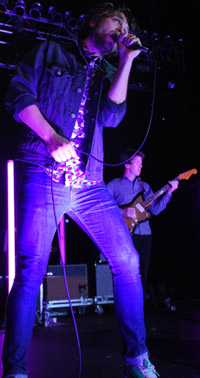 But the Love did come in during the middle of the evening, and it was neat to hear the anticipatory cheers of fans before the new material, as well as the old.  Particularly strong from Beta was “When I Dream” (where singer Wesley Miles – QRO interview – shyly encouraged the crowd to snap along), “Dance With Me” (which naturally always works live), and the title track.  Yet even the heavy-with-the-new main section of the show, Ra Ra Riot managed to dip back to play a rare oldie – their cover of Kate Bush’s “Suspended In Gaffa”.  While on The Rhumb Line, “Gaffa” has rather naturally fallen off regular RRR set lists, so it was a nice touch to see it come back for this night. 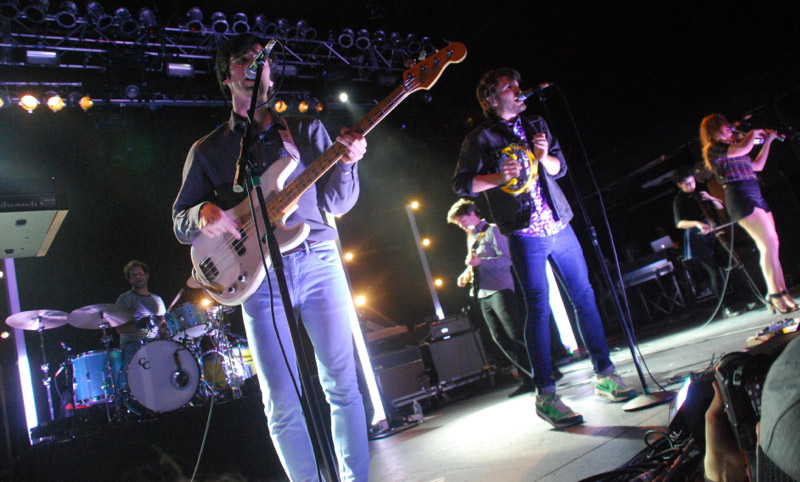 Like the early part of the show, the closeout largely eschewed Beta Love for earlier songs – though after Miles did his now-natural dive into the photo pit to high-five everyone he could reach at the end of “Dying Is Fine”, the band actually went into the encore break with Beta’s “I Shut Off”.  But they turned back on for “The Orchard”, then the very old “Ghost Under Rocks”, and then back to The Orchard for “Boy” – as the most-recent-but-one record, Orchard was naturally featured somewhat less than other releases, but still got in well in the encore return. 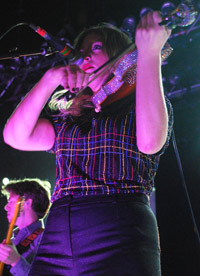 It does have to be noted that Terminal 5 wasn’t exactly packed to the gills.  The upper balcony was closed off, something that T5 has actually been doing more of, while the main balcony seemed to be entirely VIP (and not just the usual house-left wing of the balcony).  Meanwhile, there was what at least felt like a widened photo pit (where photographers got to shoot the first four songs, one more than is standard), while the stage floor wasn’t full all the way to the back bar (and that stage floor included a second soundman & set up taking up space).  Some will say that Ra Ra Riot took a hit in popularity after the departure of cellist Alexandra Lawn (QRO interview), as they lost those who would pine after their own indie Padmé Amidala – but touring cellist Clarice Jensen filled in very well, not just on the electric cello, but also doing keys & back-up vocals for “Too Too Fast” (though violinist Rebecca Zeller handled back-up vocals on “Ghost Under Rocks”).  Beta is also a more electronic record, but that seems to be the way with seemingly every indie band these days (just look at Arcade Fire…).  Moreover, it’s hard to sell-out a hump day in October – just ask Phoenix, who struggled to fill the (admittedly much larger) Barclays Center the Wednesday prior (QRO review). 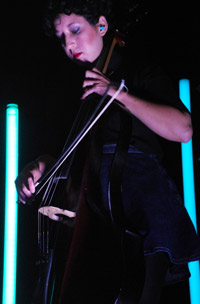 Like Phoenix, Ra Ra Riot is one of those bands that one just has to love – the only ones who don’t are those who haven’t heard them yet.  There are still many who haven’t, despite QRO’s ceaseless, bordering-on-stalking coverage of the band (those four shows vs. Pavement in 2010 might have been the only NYC dates of theirs that we haven’t caught…).  But whether you knew them back when, or are just coming to them now, Ra Ra Riot are a favorite all ‘round. 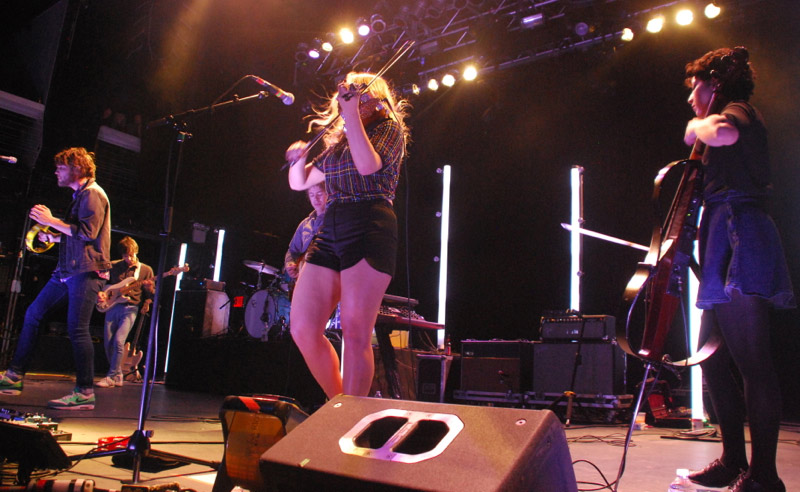