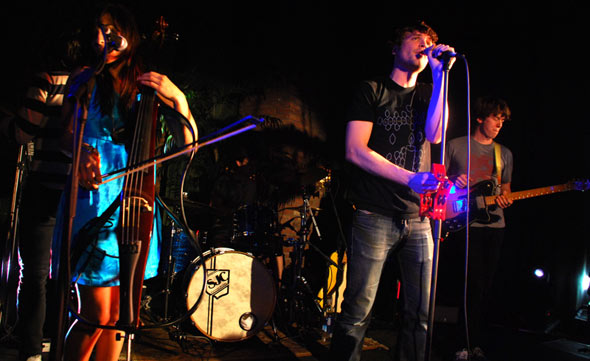 Click here for photos of Ra Ra Riot at Union Hall in Brooklyn, NY the night before in the QRO Concert Photo Gallery

While the internet has stolen a musician’s revenue stream of people actually paying for albums, it has provided something else, especially indie artists (who never sold that many records anyway…): much more cool.  Groups no longer have to toil away in the obscurity of the college towns or British radio, hoping to be the next R.E.M. but ending up the next Mercyland (if you know who Mercyland was, now that’s cool…), as they can be discovered (and illegally downloaded) all over the world.  Nobody looks to MTV to "hear it – duh-duh-duh-duh-duh-duh-duh-duh – first."  That cool may not sell more records, but it hopefully gets more fans to the shows (the fall-back financial backbone these days).  And it can also open up whole new revenue streams, with artists licensing their music for products needing to be cool, associating (even wearing) brands that yearn for the cool, and playing parties that only heat up thanks to the cool – what in olden times was called ‘selling out’.  But if Prince couldn’t make a mint eleven years ago off of "1999", then nobody can really sell out these days.  Instead, it’s an opportunity to get your music to people who haven’t heard it and otherwise wouldn’t, to get your fans to hear it for free, and to get pay your rent.  Case in point: Ra Ra Riot playing the invite-only launch party for Ann Taylor’s new LOFT Style Studio, at Bowery Hotel in New York on Wednesday, April 14th.

Ra Ra Riot are definitely a band with some ‘cool’ heat behind them – but balanced so that it’s not all hype.  Their self-titled debut EP (QRO review) got them notice in 2007 – right at the same time as the death of drummer/songwriter John Pike.  But the six-person collective played on 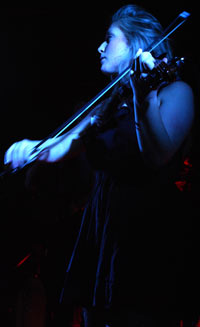 (QRO live review not long after Pike’s death), touring relentlessly and building up a loyal following.  2008’s full-length The Rhumb Line (QRO review) compiled and distilled everything the band had accomplished into one of the best records of the year (#3 on QRO’s Top Albums of 2008), as they seemingly tried to single-handedly save the world like an early U2 with strings.  Yes, having pretty ladies Rebecca Zeller and Alexandra Lawn (QRO interview) on violin & cello, respectively, set Ra Ra Riot apart, but they were as fully integrated into the band as Milo Bonnacci’s guitar or Mathieu Santos’ bass (QRO interview) – though the skeleton-like ‘electric frames’ to the classical instruments do look, well, cool. 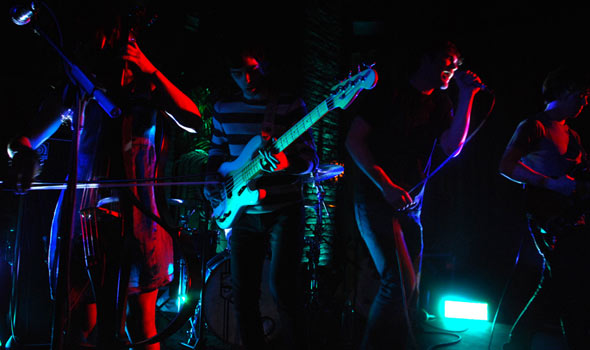 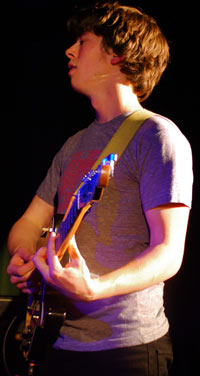 The continual performing, impressive for a six-person band (thanks to Mark Wahlberg – and if you get that, you’re really cool…), has afforded Ra Ra Riot the chance to play sponsored parties and even highbrow festivals such as Brooklyn Academy of Music’s ‘Sounds Like Brooklyn’ earlier this year (QRO live review).  But it’s also cost them in terms of time to write new material, which has previously left them strapped to fill out their set list (QRO live review).  Taking something of a break, or at least a breath or two in 2009, allowed Ra Ra Riot to develop new songs – they may not be as prolific as the equally young, male/female multiple-person collective with strings, but from across the pond, Los Campesinos! (QRO spotlight on – who put out two records in 2008, and another one just recently), but they don’t have to play "Ghost Under Rocks" three times in a set anymore, either.

In the week leading up to their appearance at Coachella (QRO Festival Guide), Ra Ra Riot played two warm-up shows in their hometown of New York.  First was at Park Slope’s basement venue Union Hall, announced only the day before, and sold-out within a few hours.  A much more ‘intimate’ venue than they usually play (read: small – QRO venue review), the Tuesday night show (QRO photos) was an electric one, as much fun as you would have hoped for in a performance where you’re so close to the band (at least if you’re up front…), and everyone’s so packed in – on stage as well as off. 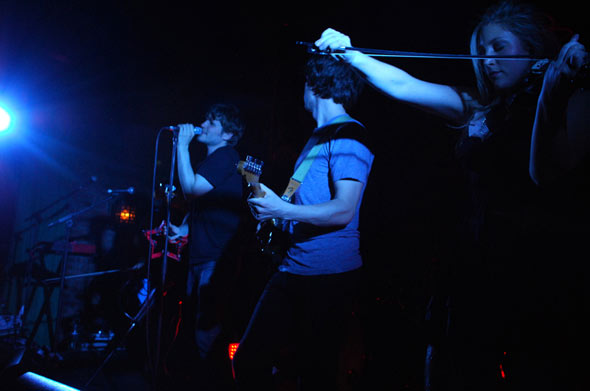 The Bowery Hotel show the following night, or at least the setting, was far different.  Being a clothing collection launch, the event brought out the fashionistas as opposed to the hipsters, though they weren’t as oppressive as they could have been – maybe there was a special V.I.P. room for the celebrities who were supposedly there but no one saw (Maggie Gyllenhaal, Alexis Bledel, Mena Suvari – a.k.a. the actress who peaked in 2008 with The Dark Knight, the actress who peaked in 2007 with Gilmore Girls, and the actress who peaked in 1999 with American Beauty).  Or maybe they just showed up, got their picture taken, and then left to go to something more important.  There were also some people who were famous if you followed the fashion world, like Amanda Hearst or the DJ, Alexa Chung, but otherwise couldn’t pick them out of a line-up.  The stage at Bowery Hotel was sort of dumped in a corner, on an odd angle with a wall of glass doors cutting through the crowd, and with equally odd lighting: a combination of roving spotlights, backlit plants and a chandelier – and the best light only came on in between songs, when the band wasn’t playing.  It was open bar (didn’t even seem to need to tip) – yet another draw to compete with Ra Ra Riot for the audience’s attention.  And there was the usual fashion party insanity at the door to get in, PR flunkies with various, inaccurate lists who only care about the people who don’t need to be on the list to get in (and weren’t going anyway), plus getting their friends in, plus gruff security (a.k.a. the only minorities present at the whole thing) trying to keep large-egoed folks who are inside from standing in the one doorway, attempting to get their friends inside.  As always, it was much better just to say you were with the band… 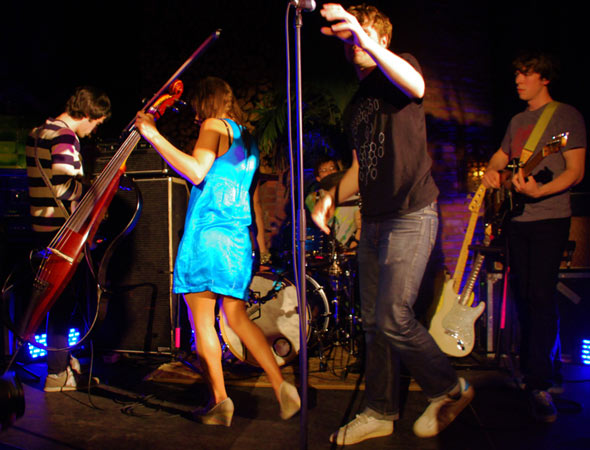 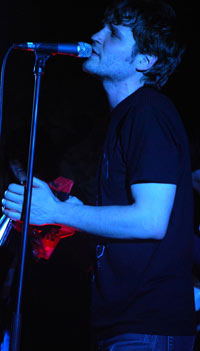 So yes, the crowd was somewhat less amped-up and interested than at Union Hall the night before.  After opener "Each Year", singer Wesley Miles (QRO interview), faced with a gaping distance between the stage & the audience that was populated only by photographers, said, "You can get closer – don’t let the machines take up all the space…" – before quickly adding, "Just kidding, I love you guys" (Miles later reiterated his appreciation for photogs, so we’ll let him off the hook and not bring down our dangerous hammer…).  The first new song of the night was the (relative) oldest, "Too Dramatic".  After making its debut just over a year ago at South-by-Southwest in Austin (QRO photos), "Too Dramatic" is already instantly recognizable (and it’s not the only ‘too’ song that the band has), as it’s hard not to fall in love with it on impact.  A couple of other new songs, labeled (on the set list – QRO photo) "Top Secret", populated the middle of the performance, higher and more orchestral, almost like the heartfelt grandeur found on the soundtrack to a John Hughes movie (and one of them had Santos open it by shouting something that’s still-indecipherable).  But Ra Ra Riot closed it out with staples like "Run My Mouth", "Too Too Fast" (the other ‘too’ Ra Ra song) and yes, "Ghost Under Rocks". 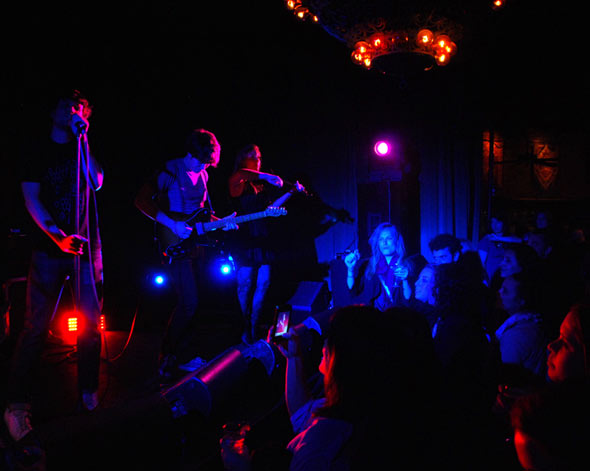 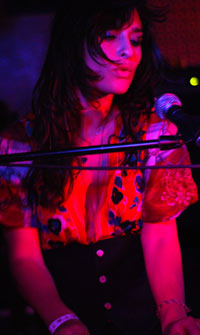 More importantly, the band managed to engage and excite a relatively unengagable, unexcitable crowd, by the end filling the space up front not with men and their machines, but with (mostly) girls and their dancing.  One lady even brought Miles a beer, which he said he’d save for later (to be fair, it wasn’t like it cost the woman anything…).  While the lighting was random, the band still looked good on stage – has Bonacci been working out? – though nothing could quite compare to Lawn’s outfit the night before, and drummer Gabriel Duquette was stuck in the darkness (poor Gabriel Duquette – forever in shadow…).

Click here for all of QRO’s coverage of Ra Ra Riot & their upcoming dates in QRO’s ‘Spotlight On : Ra Ra Riot’ 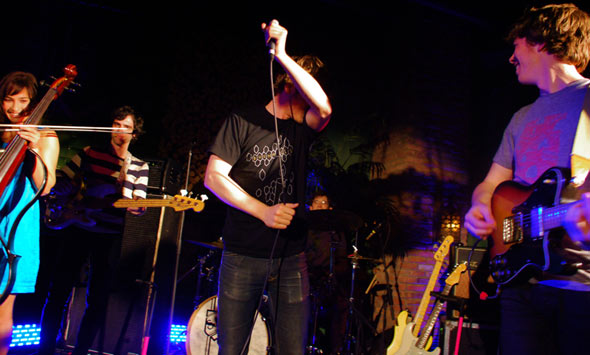