<img src="https://www.qromag.com/wp-content/uploads/2007/10/randallsislandcover.jpg" alt=" " />It might have been October, but it felt like a summer festival on New York City’s Randall’s Island, thanks to Arcade Fire, LCD Soundsystem, Blonde...

It might have been October, but it felt like a summer festival on New York City’s Randall’s Island, thanks to Arcade Fire, LCD Soundsystem, Blonde Redhead, Les Savy Fav, and global warming. Something like 25,000 people showed up for the biggest indie rock concert the five boroughs have seen for a long while, drawn by the warm weather and all-star line-up.  Randall’s Island usually hosts big-name mainstream acts like Willie Nelson’s ‘Farm Aid’, the Rage Against the Machine/Wu-Tang Clan ‘Rock the Bells’, and The Dave Matthews Band, but on Saturday, October 6th, the island-cum-park served host to some of the alternative music’s finest.

Unfortunately, it was a hell of a time getting to the Island.  Being green and using public transportation, throngs of fans took the subway to 125th Street in Manhattan to transfer to an MTA bus to go the rest of the way.  But so many showed up in East Harlem that the line for the buses ran all the way around all four sides of the block.  The only thing keeping the spirits up of those in the queue were the looks on the faces of newer arrivals as they walked on by, down the line, mouths agape in disbelief at its length.  Many gypsy cabs were on-hand, offering the same ride for twice the cost – there was even one guy offering to walk you over there, for a buck a head (after he swung by, claiming it was only a twelve-minute walk, MTA personnel there managing the line advised everyone that it was more like a half-hour walk – “And you don’t need to pay anyone to do it!”).  Luckily, the event started something like an hour and a half after its official start-time of 3:30 PM, meaning only the lesser-known Wild Light from Boston suffered from serious audience lag. 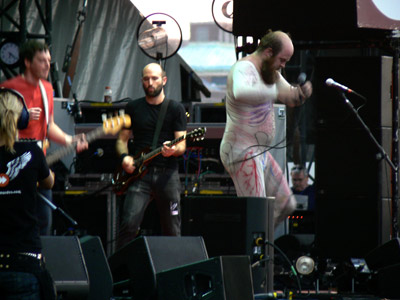 However, many a too-cool-for-school hipster couldn’t be bothered to show up while it was still light out, which meant these scenesters missed out on the incredible antics of Les Savy Fav.  Playing mostly off their latest, Let’s Stay Friends (QRO review), the band hit the crowd with such numbers as the thumping “The Year Before The Year 2000”, crowd favorite “Rage In the Plague Age”, the anthemistic “Brace Yourself”, and the dance-punk “Patty Lee”.

of the show, with costume changes (including showing off his jolly belly and putting on a ‘visible man’-like body suit – see above), messing with other band members (who never batted an eye), and especially his two runs straight into the crowd.  There’s nothing quite like seeing stage security trying desperately to manage Harrington,

running this way and that with his microphone cord as he got deeper and deeper into the crowd, or when they at first refused to let fans up front deliver a cake to the man – something Harrington quickly overruled (maybe security was just watching out for the singer’s cholesterol…).  Always known for their incredible live performances, if anything, things were more chaotic at Randall’s Island, as the stage was the biggest the band had ever performed on, and, up so high and with such a large photowell, it was also the farthest they’d ever been from the crowd. 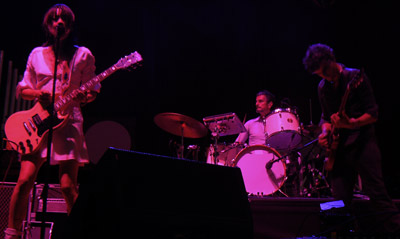 Dusk was turning to dark by the time Blonde Redhead hit the stage, but that was a point in favor of the band, as their latest record, 23 (QRO review) is much more of a nighttime album.  And the band stuck to 23, playing only song not from it (“Falling Man”, from their prior release, 2004’s Misery Is a Butterfly) – though the haunting, ultra-distorted finisher “(We Are a Real Team) Harry And I” is only featured on the Japanese edition of 23.

Opening on a high note with “Dr. Strangeluv”, Blonde Redhead washed over the crowd as they won them over.  The post-rock vibes of “Spring And By Summer Fall” kept things flowing, but with the eponymous “23”, the early evening went into overdrive.  Singer/bassist/keyboardist Kazu Makino, after hitting a few notes on her keyboard and setting them on repeat, was free to dance, with her willowy white dress making her only seem more ghostly and ethereal.  But the group did not peak too early, as later piece “SW” shook with a chilling, ‘the end is nigh’ atmosphere, as singer/guitarist Amadeo Pace’s voice felt both echoingly distant, and disturbingly close. 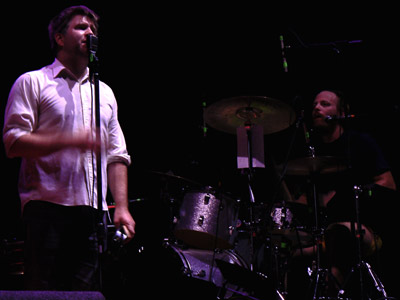 A bit of the odd man out on the Randall’s Island bill, the dance-rock LCD Soundsystem isn’t the first band one would put with indie acts like Arcade Fire, Blonde Redhead, and Les Savy Fav (even if drummer Pat Mahoney

was previously in LSF).  But James Murphy & co. have gotten big enough to fill festivals, and their music was powerful enough to inspire the ultimate rock concert incident – crowd-surfing.  The set was mostly tracks off of their latest, Sound of Silver (QRO review), though they still managed to throw down some pieces of their breakthrough eponymous record near the end.

After having begun with Silver opener “Get Innocuous”, things really took off.  Murphy said, “We’re home.  Thank you for being home.  ‘Cause it would be awkward if you weren’t here.  We need guests, like any good party”, and then launched into a truly anthemistic, all-inclusive version of “Us vs. Them”.  Murphy had other funny moments as well, from hurting his toe and almost much more (“Don’t feel bad for me.  It’s my fucking job”), or pointing out when Mahoney started playing the wrong song.  The power was turned up a notch with “Time To Get Away” and Silver’s stand out “North American Scum”, but the sound was a little clearer on “All My Friends”.  While Daft Punk never played at Randall’s house, even without LCD Soundsystem’s hit single, the crowd was more than sated, thanks to late-set numbers “Tribulations”, “Movement”, and “Yeah”.  And Murphy closed things out with Silver’s memorable finisher, the ‘piano man’-esque “New York I Love You” – which was only made sweeter, now that everyone was home. 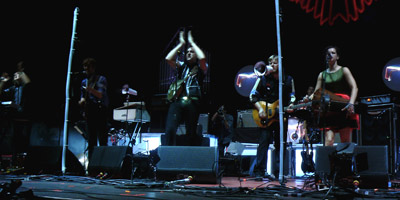 Mixing about half-and-half from 2004’s breakthrough Funeral and this year’s excellent follow-up, Neon Bible (QRO review), along with a few from other, lesser-known releases, the show was something like all high points, right from the first strains of Bible’s “Black Mirror”.  Like at Judson, they opened the set as they opened Bible, with the impressive one-two of “Mirror” and “Keep the Car Running”, with the former opening on a slow simmer to boil before the latter torched the evening.  Other top Bible tracks in the set included the expansive “No Cars Go” and the back-to-back-to-back of the politically charged “Intervention” and “Antichrist Television Blues” with the exceeding-its-delivery-on-Bible “The Well and the Lighthouse”.  More than enough for any fan, Arcade Fire also delivered virtually all your favorites from your top desert island disc, Funeral: “Wake Up”, “Rebellion (Lies)”, and Neighborhoods “#1 (Tunnels)” “#2 (Laika)” and “#3 (Power Out)”.

If there was a weak point to the set, it was in the early middle, where the band combined the slower “Haiti” (Funeral) and “My Body Is a Cage” (Neon Bible) with two slower, lesser-known pieces, “I’m Sleeping In a Submarine” (from their 2001 self-titled EP) and the 2005 non-album single “Cold Wind”.

All still strong tracks, they died a bit in such a huge environment, and halted the energy that had been building.  But Arcade Fire were more than able to bring things back up and into a crescendo, and not just with the ‘standard’ stage antics like Win Butler running into the audience, Régine Chassagne and Marika Anthony-Shaw egging the crowd on, or Richard Parry destroying some poor cymbal; Win’s brother William took a drum and climbed high up the stage scaffolding during finisher “Rebellion”, and the whole band played The Violent Femmes’ classic “Kiss Off” acoustic in the photowell (click for video) for the second of two encores.

The nation’s heat wave is already breaking and the thermometer’s already dropping, but if the Columbus Day Weekend Randall’s Island bash was an Indian summer send-off to a great 2007 festival season, it went out with a bang. 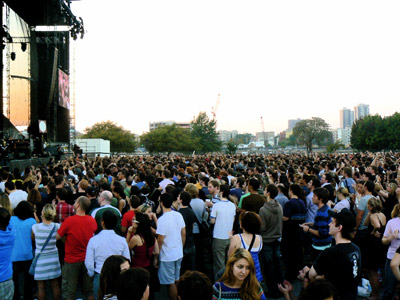