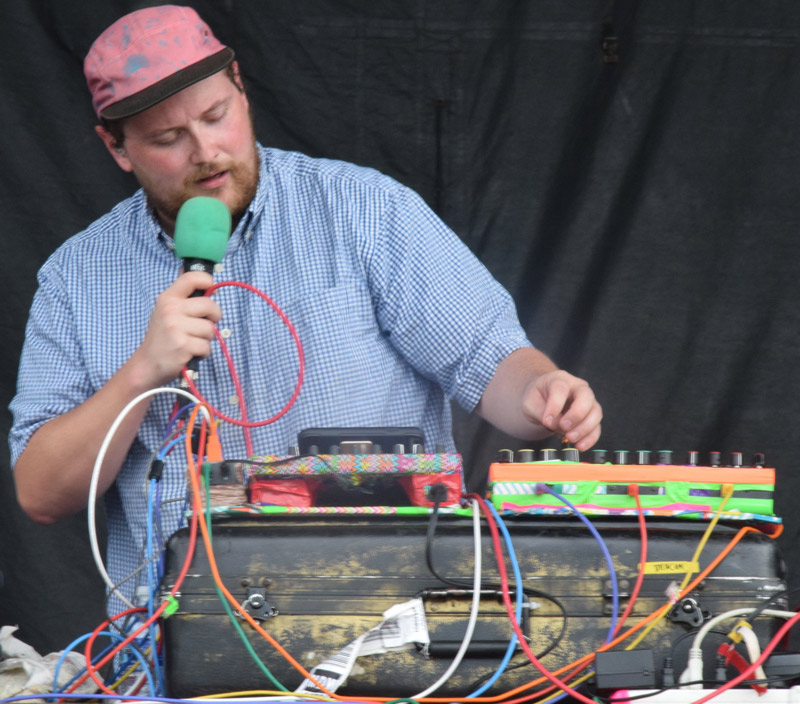 Riot Fest 2016 opened on a D note, with the likes of Diarrhea Planet, Dan Deacon, and The Dillinger Escape Plan. Diarrhea Planet’s punk rock on the Rock Stage was of course appropriate for Riot Fest, while Dan Deacon was more of a curveball. Playing solo at the Roots Stage, just him & his computer equipment, Deacon had tech issues, eventually having to restart his whole set-up. The talkative musician vamped for time with banter, noting, “This is why you start bands with your friends, not computer…” 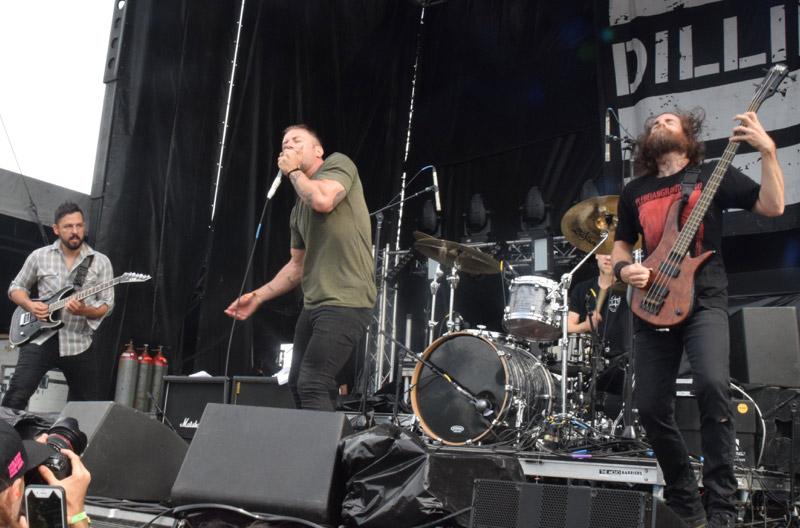 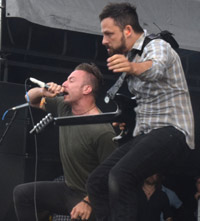 Meanwhile, The Dillinger Escape Plan were all intensity on the Rise Stage, right from the get-go, with leaps from singer Greg Puciato and guitarist Ben Weinman, Weinman making his thrash-hits on his guitar work with the music. They certainly didn’t seem like a band about to break-up… 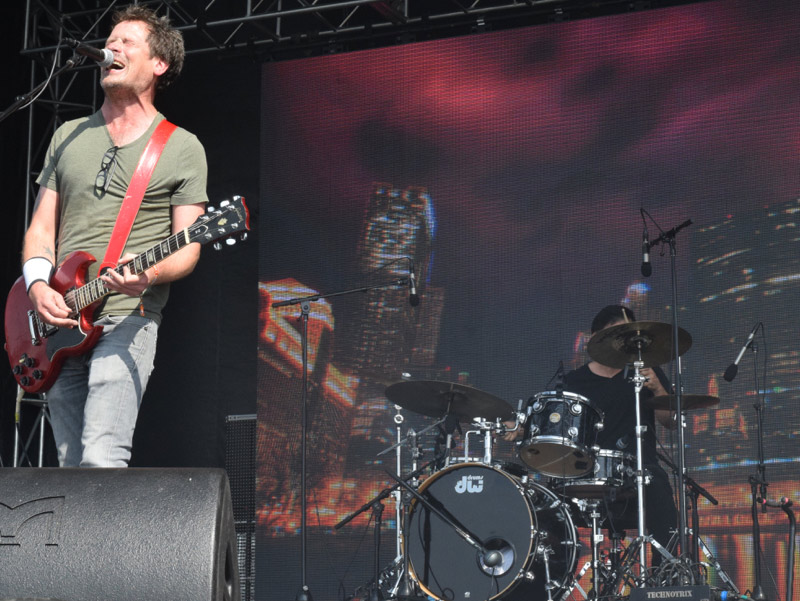 On the flipside was Girls Against Boys at the Riot Stage. The alt-punk veterans are nearing on thirty years, but the crowd wasn’t as large or enthused as one would have expected. Perhaps it was just too sunny & hot at this point in the day. 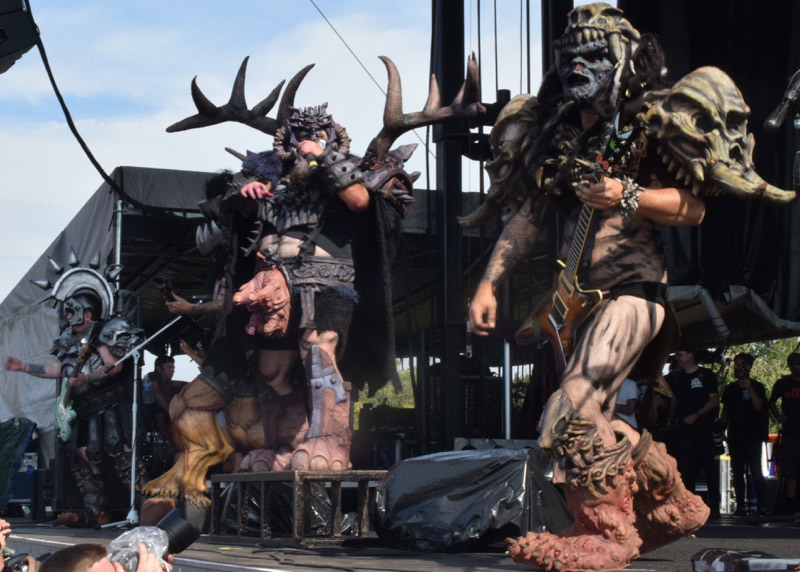 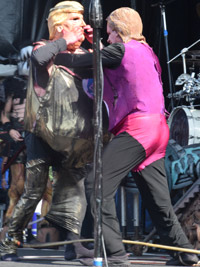 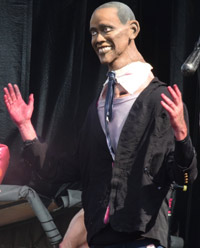 But the crowd at the Rock Stage was huge for our intergalactic overlords, GWAR! The mock-horror band of costumed characters has played Riot Fest every year, and are always a standout. This time they was announced that of course they weren’t going to let puny humans pick the next President of the United States, but instead it would be decided with an on-stage brawl. First Obama came out to defend his title, only to be beheaded and spew blood on the crowd. Then Hillary & Trump wrestled while GWAR played “Bring Back the Bomb”, Hillary flaying Trump, only to have her breasts chopped off by GWAR (and more blood on the crowd). And this was only the first three songs…

Particular note should be made of the fans up front that wore white t-shirts to fully capture the fake blood sprayed upon them then & for the rest of the day. As opposed to the photographers in the pit, who ran for the hills at the first sight of red (including your correspondent…).

Things got more relaxed after that, as they kind of had to. Meat Puppets on the Roots Stage were the right band at the right time: someone most in the crowd had always meant to see, but only knew a bit of, at a time when fans were just milling about and looking to relax. The eighties brothers have gotten old, but who hasn’t?, and they were still enjoying playing. Also, the cow-punkers were about the closest that Riot Fest got to country music. 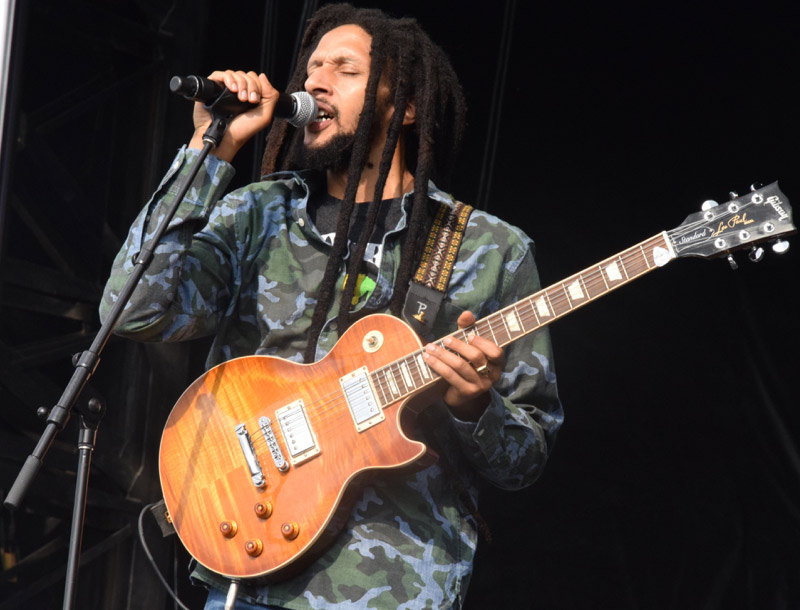 Very relaxed was Julian Marley on the Riot Stage, doing his father’s seminal Exodus. If you’re gonna have Bob Marley covered by someone, might as well be his son Julian (or other son Damien). The set confirmed that reggae is very nice, but also rather boring. 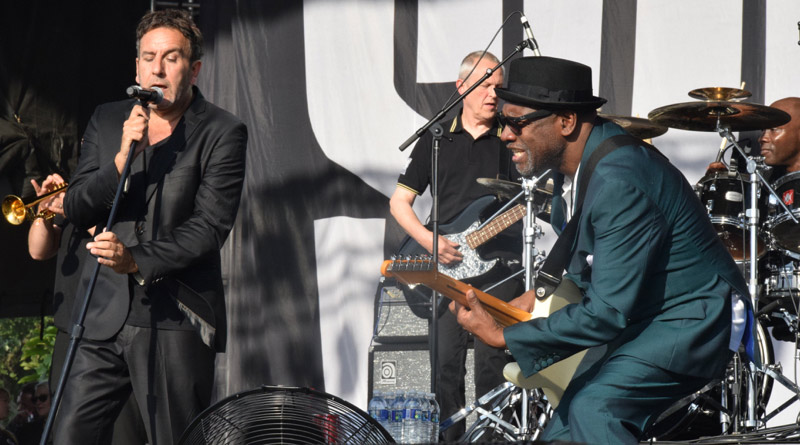 From reggae to the style that both pre-dated and post-dated it, ska, eighties two-tone legends The Specials took the Roots Stage next. Iconic in all sorts of ways, they have also aged, and their songs at Riot Fest didn’t have the same energy as the old records. This was particularly the case with opener “Ghost Town” – and absolutely amazing song, wonderful that they did it, but there technical issues at the start of the set, and it just seemed mellower. Any lack of energy fell mostly on singer Terry Hall, as singer/guitarist Lynval Golding bounced around the stage. 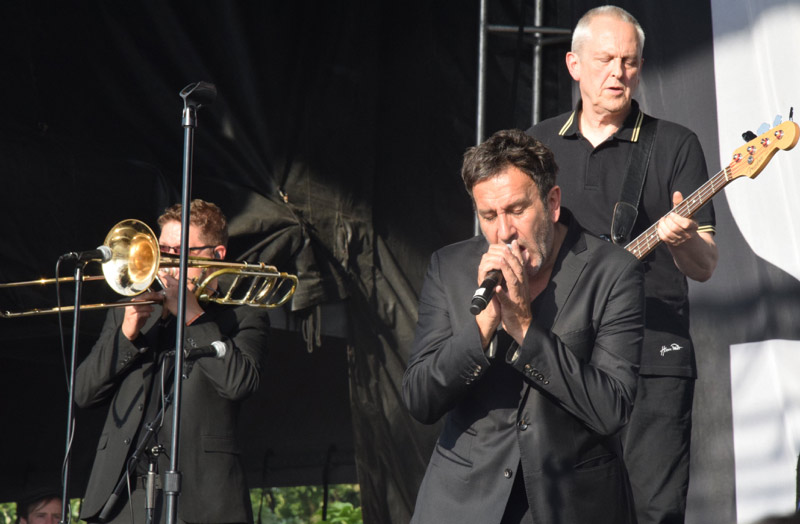 It isn’t a Specials show without some politics, even if they can’t really play classic anti-apartheid anthem “Free Nelson Mandela” anymore (but otherwise did do their many hits). There was a shout-out to not just Black Lives Matter (from the group that made Two-Tone crossing racial borders integral), but also Native American Lives Matter. “I come from a place called ‘England’ – it used to be nice, but now it’s shit. Do me a tiny favor – don’t vote for Donald Trump. How can you vote for a man with a pig’s head and that hair?” Later on, “A Message To You, Rudy” was dedicated to Rudy Giuliani. 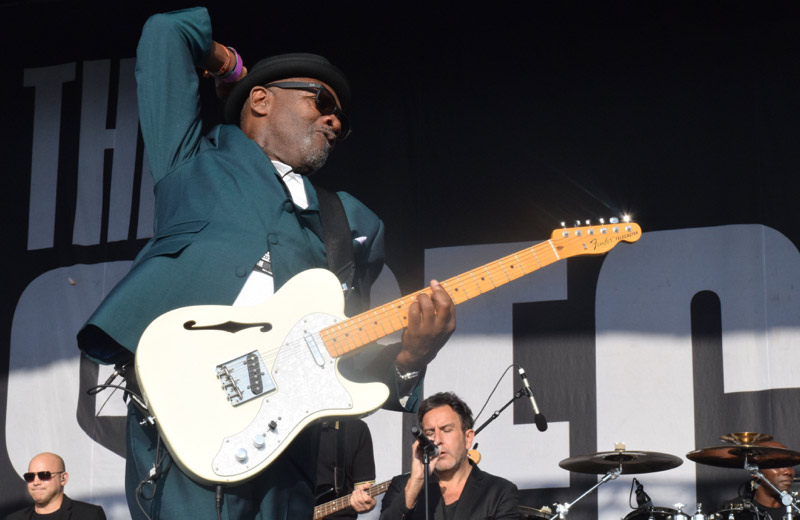 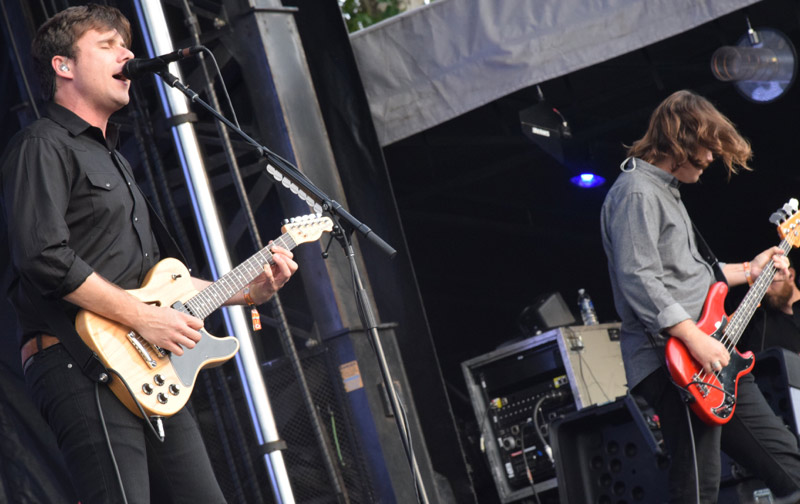 Arizona’s Jimmy Eat World were originally catalogued a decade or so ago along with the emo breakthrough artists that they came up with (and, to be fair, breakthrough singles – and Riot Fest set closers – “The Middle” and “The Sweetness” are pretty youthful), but they’ve become more pop-punk, even hard rock as they’ve aged. That definitely seemed to be the case with the new songs that they played at the Riot Stage, off their upcoming Integrity Blues. 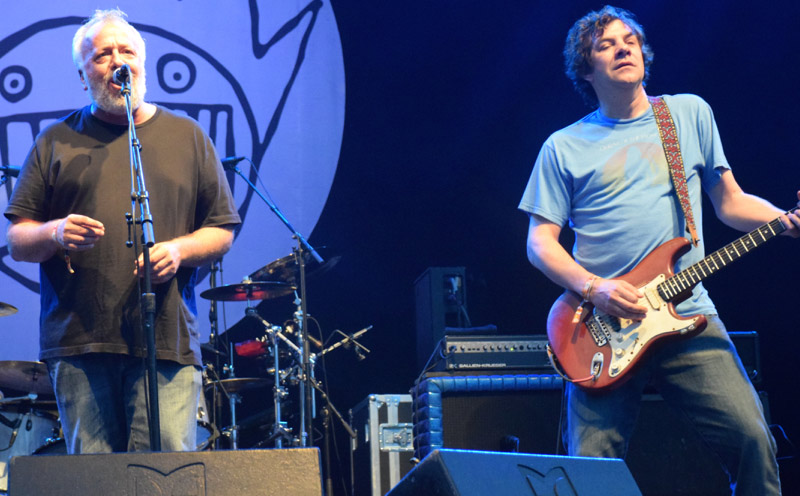 Ever since Aaron Freeman (Gene Ween) has gotten out of rehab and reunited with Mickey Melchiondo (Dean Ween) earlier this year, Ween has been playing a whole bunch of festivals – and why not? Not so much a reunion as a return, the group has been anticipated across the country – the crowd at the Roots Stage cheered just for the unveiling of their logo backdrop. But if you’d only remembered them from being weird, their set was a reminder of how psychedelic they are, geek-psych, even strutting geek-psych. 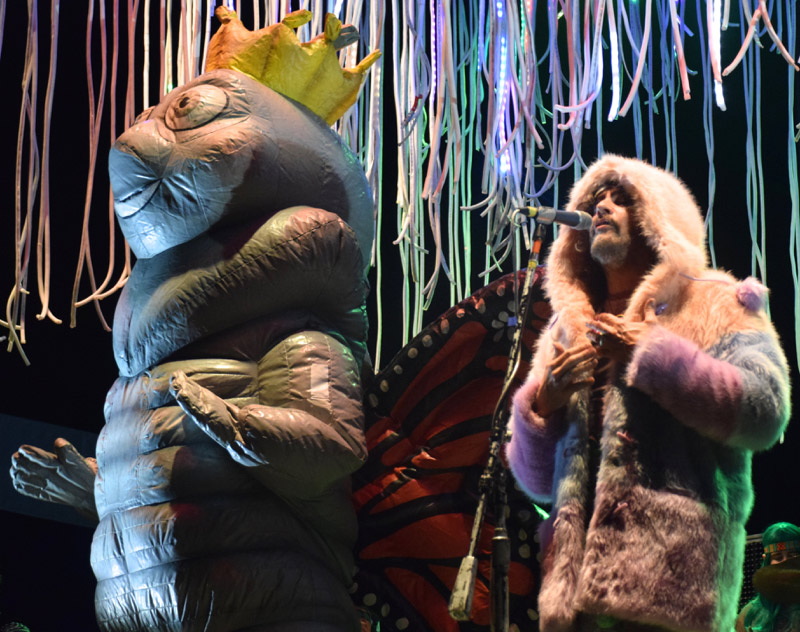 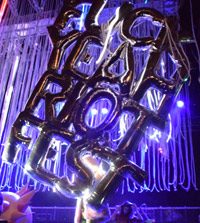 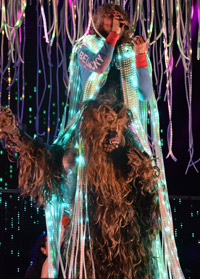 Saturday & Sunday’s headliners at Riot Fest threatened to overshadow Friday’s, but nobody overshadows The Flaming Lips. The masters of the indie-spectacular had adorned the Riot Stage with streamers and much more even before they began, but as they started there were giant balloons, confetti cannons, plus costumes, an inflatable “FUCK YEAH RIOT FEST” balloon-sign, even Chewbacca! One could say that this was the ‘usual’ Flaming Lips spectacle, and their set list did stick towards older standards like opener “Race For the Prize”, “Yoshimi Battles the Pink Robots” and closer “Do You Realize??”, but also there was also a great cover of David Bowie’s great “Space Oddity”. 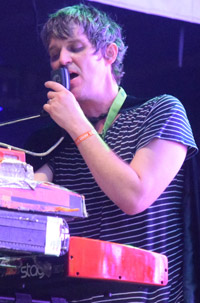 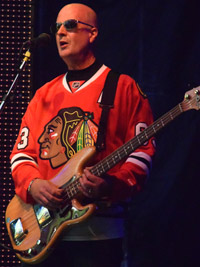 As amazing a frontman as Wayne Coyne (QRO interview) is, at one point singing while riding Chewbacca and wearing a coat of Christmas lights, special mention needs to be made of the rest of the band, who are able to handle all the spectacle, play the music, and allow Coyne to take center stage. Take Stephen Drozd, who ranged from drums to keyboards. Or bassist Michael Ivins, who, with his shaved head and sunglasses looked like the evil scientist who unleashed the robots Yoshimi had to battle.

[And save a thought for the Riot Fest grounds crew, who had to clean up all the confetti, though it littered around the Riot Stage for the rest of the festival] 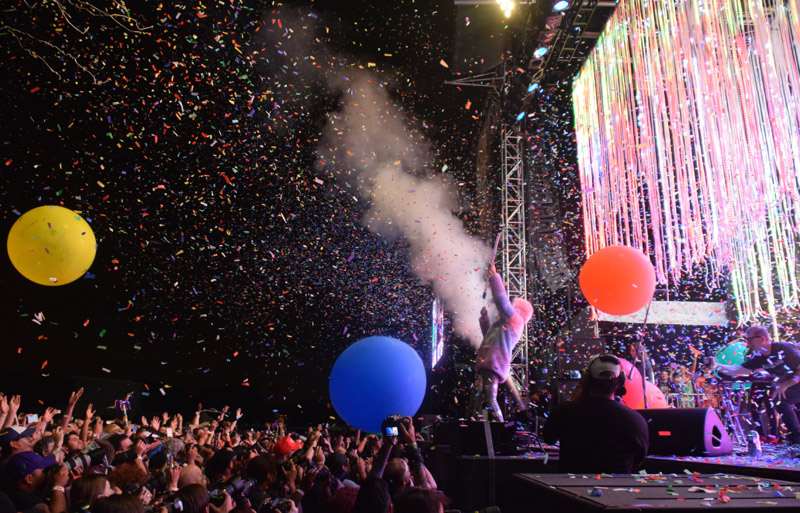