Riot Fest returned to Chicago, with a popular-leaning first day....

Just because she was playing fairly early on Friday, Liz Phair didn’t skimp on her old nineties hits at the Roots Stage, plus her newer material. She also wasn’t playing too far down on the bill to kick out photographers from the photo pit just after starting [word was that the slit on her slit skirt was a little too high…]. 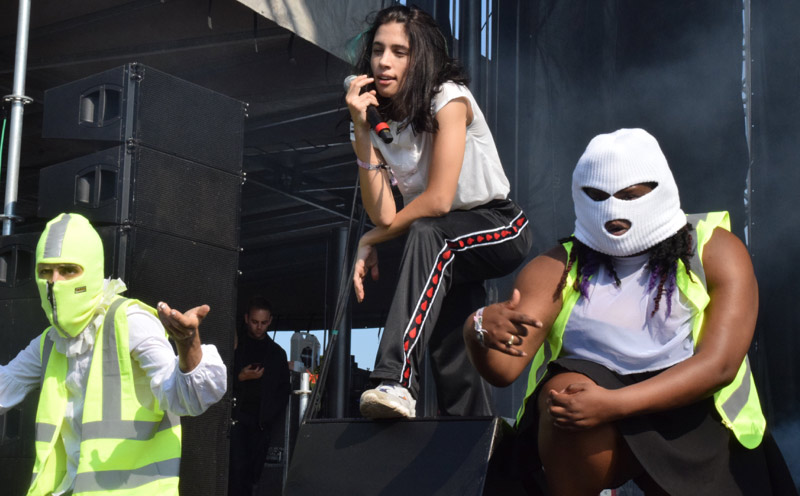 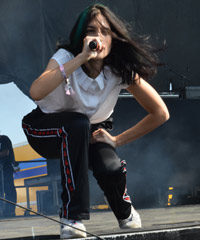 But there were tons of photographers for Pussy Riot’s return to Riot Fest at the Radicals Stage; understandably so, given that they had been launched back into the news in a most unfortunate way, with member/husband of a member Pyotr Verzilov having been poisoned in their native Russia [he is currently recovering in Germany]. The group, which this case was mainly just Nadya Tolokonnikova, opened with a banner to him. The set itself varied, from Tolokonnikova just rapping (without a mask), to a voice-over of twenty-five facts about wealth & inequality in Russia & the world (some were more ‘facts’), to a whole multi-cultural masked crew (including one in a wheelchair). And that was just in two songs of the performance. 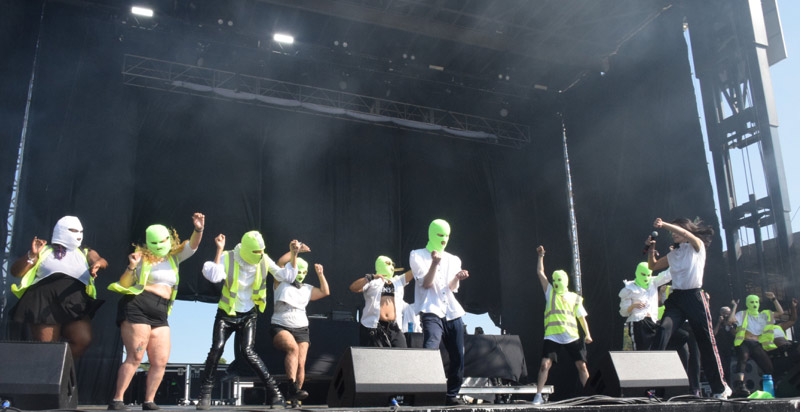 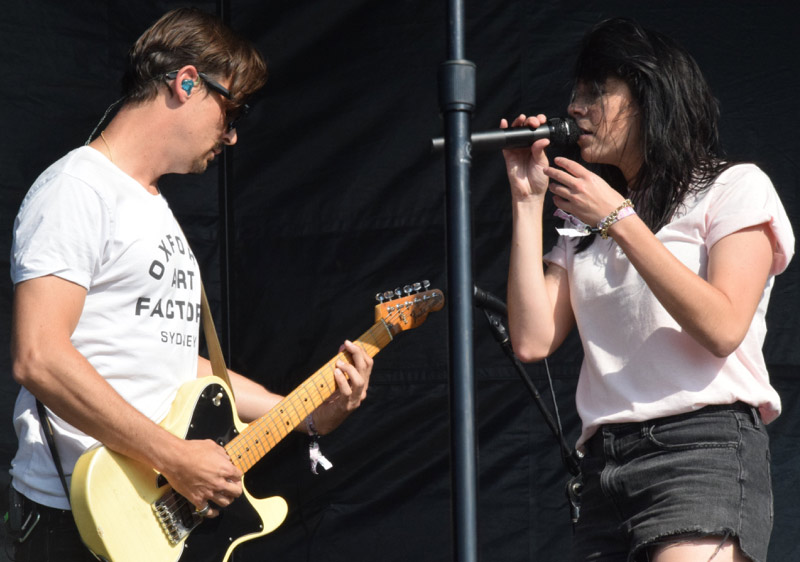 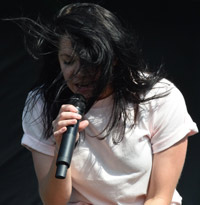 While Riot Fest is no stranger to hip-hop, the genre is still an outlier at the punk rock festival, so it was nice how large the crowd was for K.Flay’s afternoon set at the Roots Stage. And the rhymer knew her stuff – though the biggest cheer was when she covered Harvey Danger’s “Flagpole Sitta” (an alt-hit from 1997, showing the age & inclination of the crowd). She also invited up a man named David on stage to propose to his girlfriend. 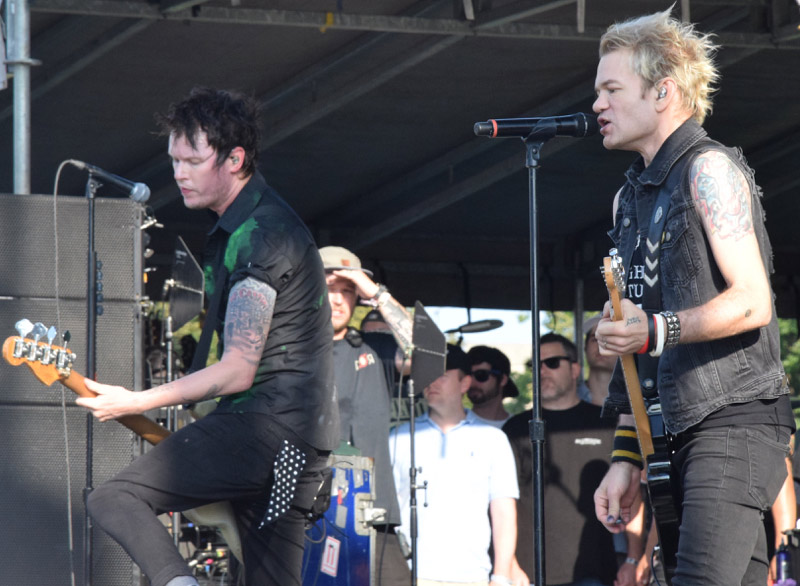 It wasn’t a surprise that there was a large, excited crowd at the Rise Stage for Sum 41, despite their late start.   Singer Deryck Whibley apologized, citing technical difficulties (also not a surprise, at any festival), and said he wouldn’t banter between songs to try to make up the lost time. The audience was certainly into it, with so many crowd-surfers that security closed the photo pit early to better handle them all. 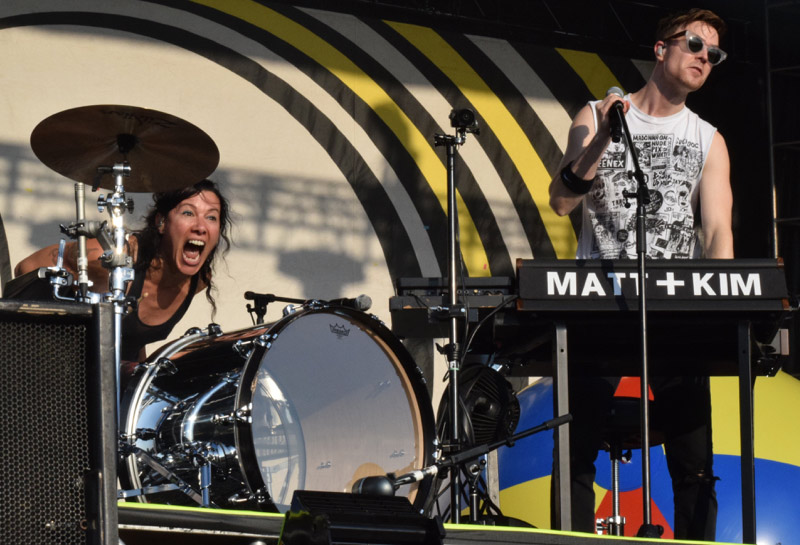 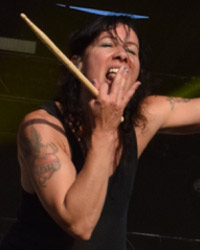 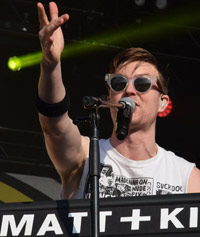 And yes, it was a suitably wild Matt & Kim performance on the Roots Stage, from balloons to female crowd surfers. Drummer Kim Schifino (QRO interview) approvingly noted that it was sisters who were in the air, “Pussy rules the world – the sooner you realize that, the more you’ll get laid!” Their upbeat songs, old & new, fit well into the first day of Riot Fest, which definitely leaned more towards the popular. 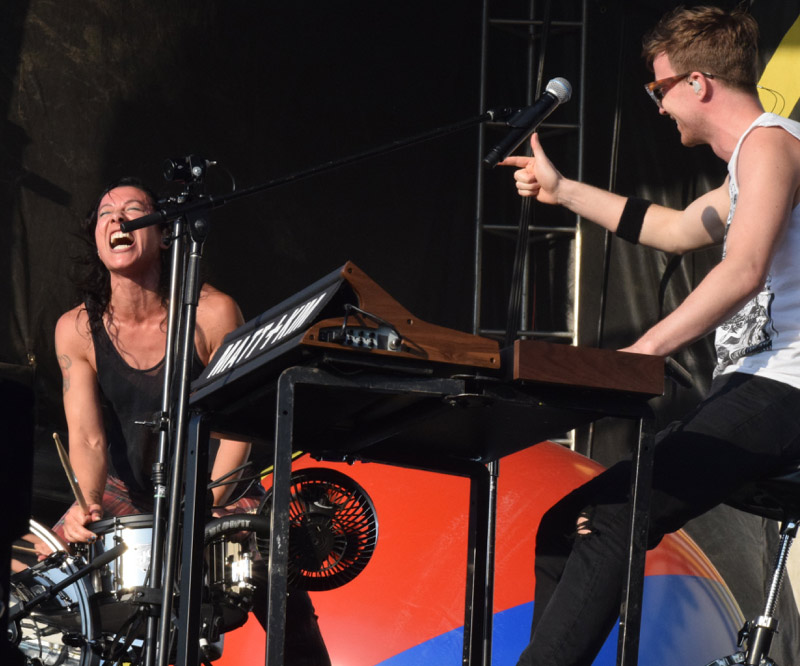 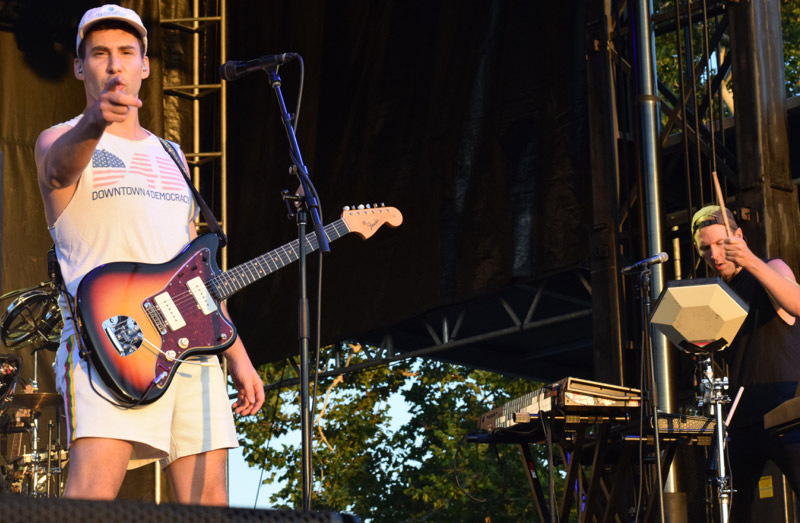 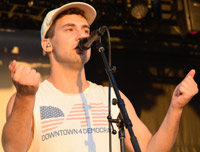 More leaning into the mainstream next on the next-door Riot Stage was Bleachers. Jack Antonoff of fun.’s own band has grown into its own, even/because it sounds like The Killers’ ‘up with people’ rock. And the Jersey boy delighted the particularly female crowd (though he kind of looks like actor Jon Bernthal up there, Shane from The Walking Dead/Punisher from Netflix, with an entirely different mood…). 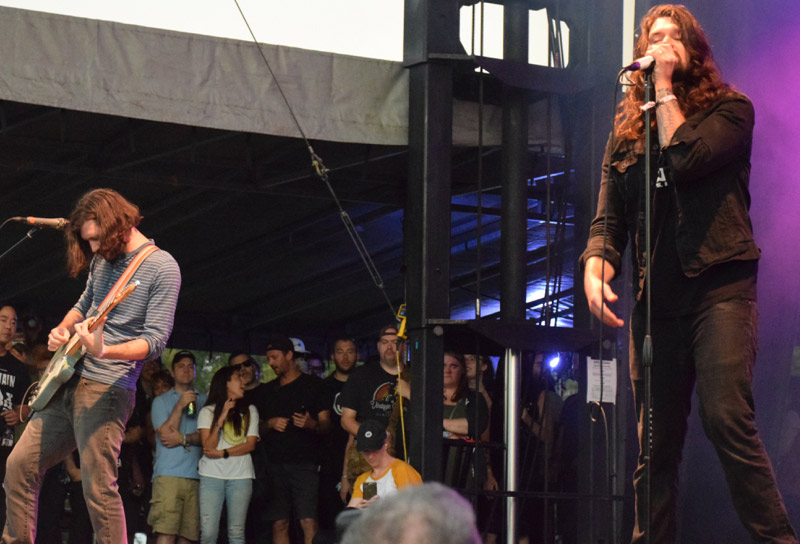 Taking Back Sunday seem to play somewhere between every other and every single Riot Fest, yet people were still happy to see them at Rise Stage. Less happy were those trying to buy sausage pizza from Connie’s at the nearby food area – they were out of sausage, because it cost the same as just cheese. 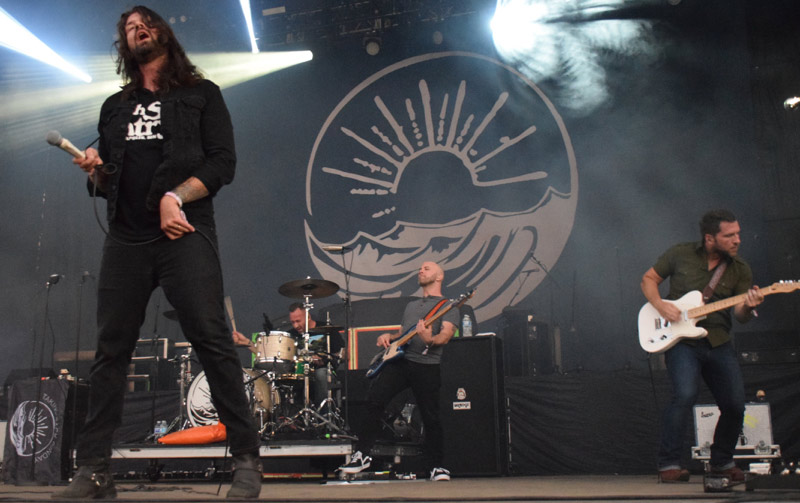 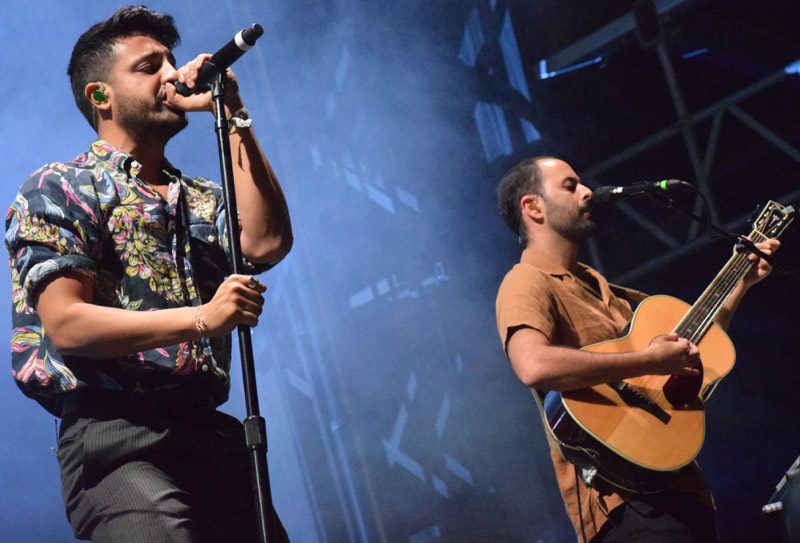 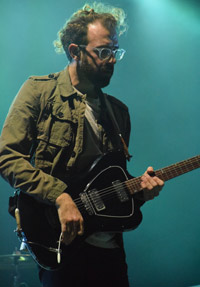 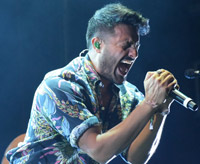 More of a stranger to the festival was Young the Giant, as the group hews more to the alternative mainstream of Lollapalooza than the indie-punk of Riot Fest. But they fit well up on the Roots Stage, giving “Amerika” “Something To Believe In”. Singer Sameer Gadhia is impressively evocative and active up there, but don’t forget about guitarist Jacob Tilley (the one with glasses). Perhaps they’ve never matched breakthrough single “Cough Syrup” – “Sing along if you know this one” – but they had a wide and excited young crowd. Special bonus points for covering, “The first song I ever played, in the second grade talent show,” “All the Small Things”, in tribute to the not-playing Blink-182. 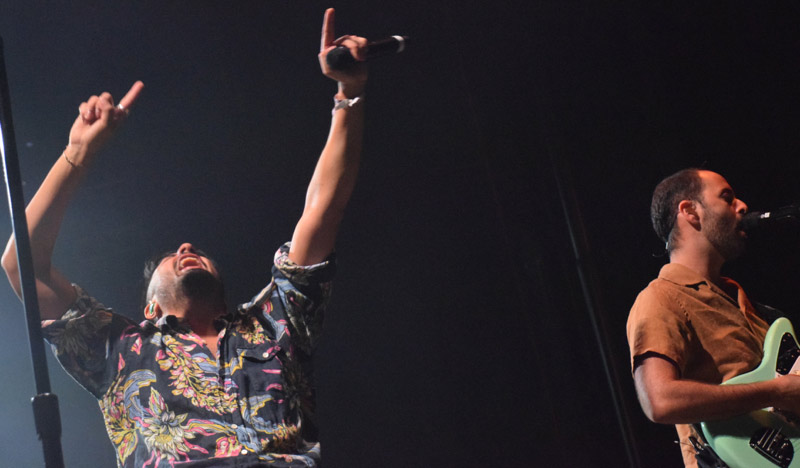 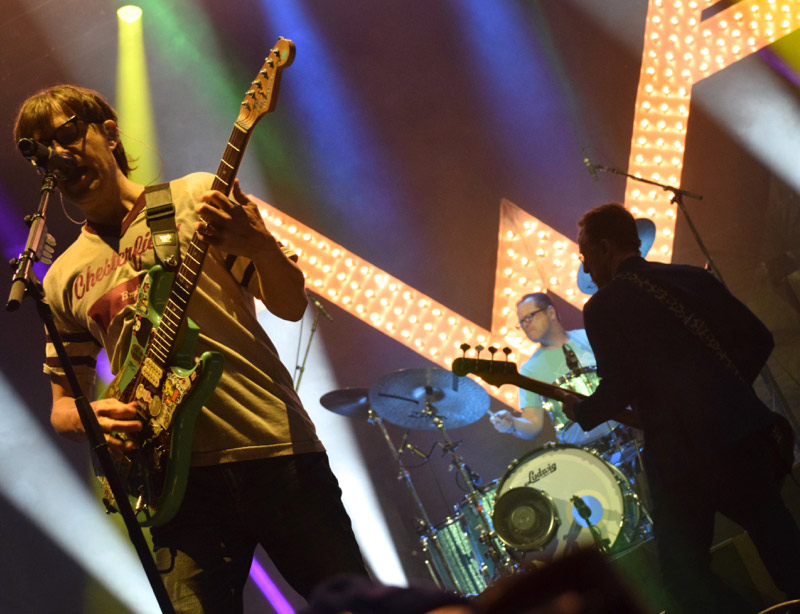 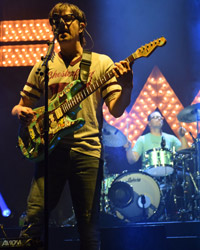 When Blink-182’s cancellation was announced, also announced was the band that stepped up to fill in: Weezer. There are certainly people of a certain age who probably love Blink-182 more, but those both older and younger were definitely more pleased with the iconic W. The group has gone from nineties alt-success to twenty-first century critical failures to their current revival, and are doing it with aplomb, with even frontman Rivers Cuomo super comfortable up there on the Riot Stage.

Of course they crushed it with old songs, but also new-ish ones from their dark period like “Beverly Hills” and “Pork and Beans”. They threw in an extra Pinkerton (QRO deluxe edition review) song in “The Good Life” (they have been doing that this tour – QRO live review). One aspect of them currently has been their embrace of covers, from an interlude of Green Day’s “Longview” in The Turtles’ “Happy Together”, plus a-ha’s “Take On Me” (done solo by Cuomo, as was their own “Island In the Sun”), another cover of “All the Small Things”, Black Sabbath’s “Paranoid”, and the cover that started it all, internet-driven Toto’s “Africa”. 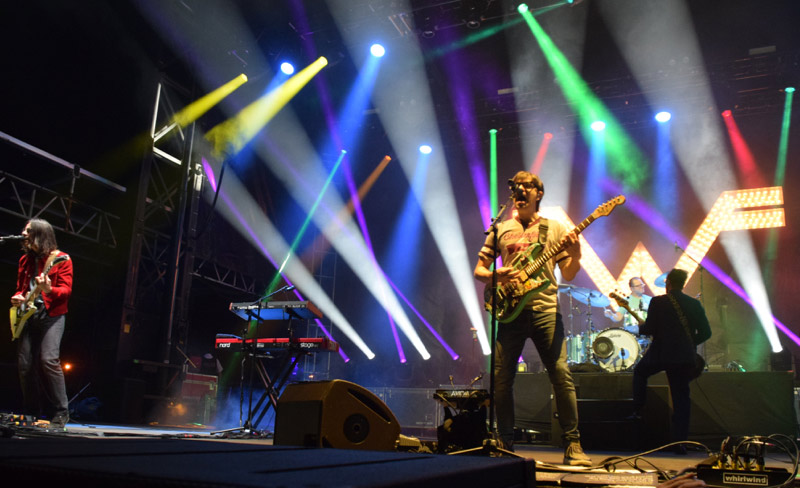