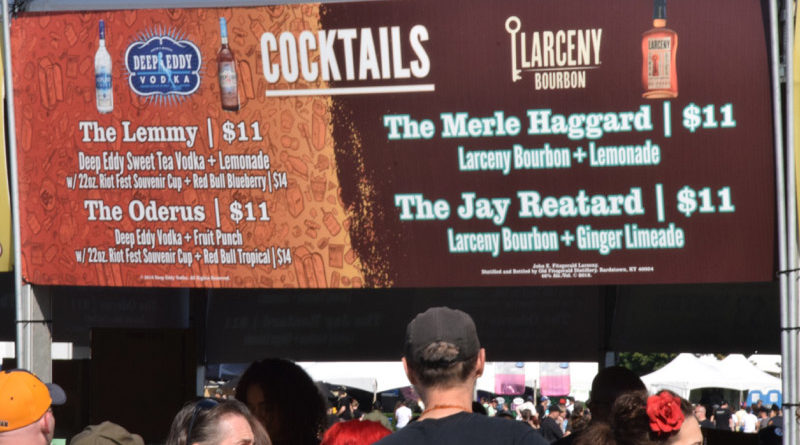 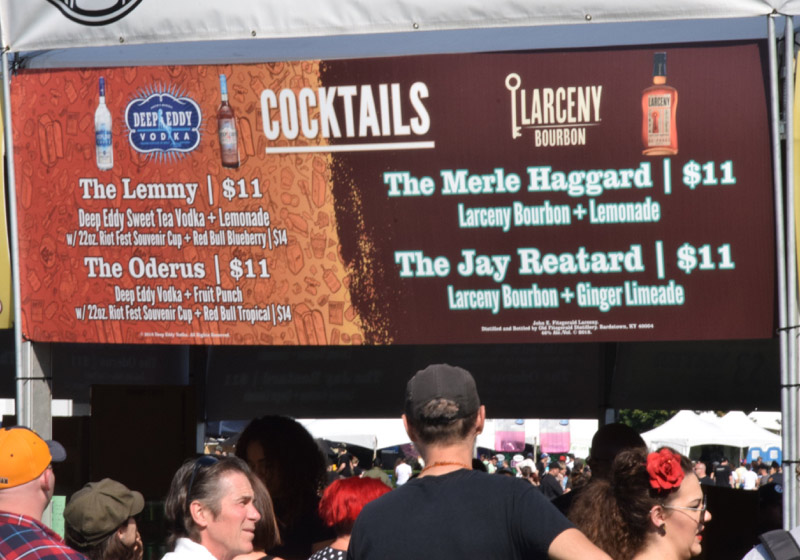 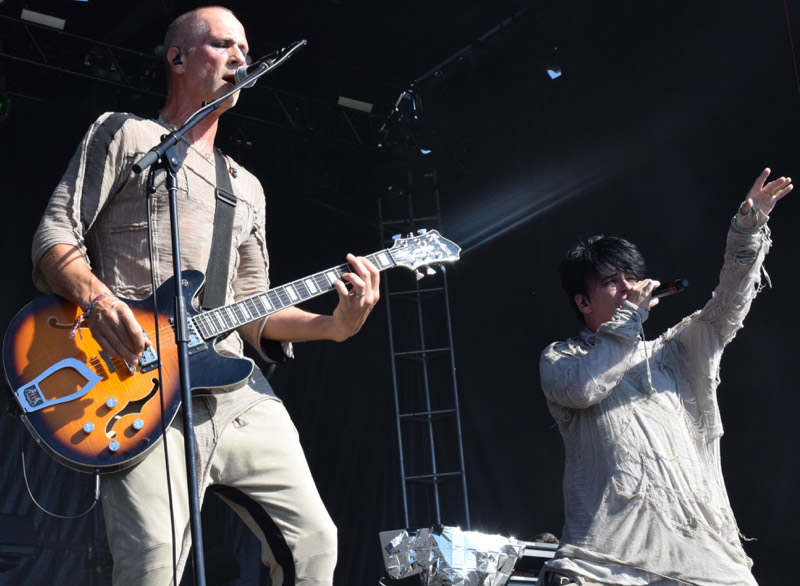 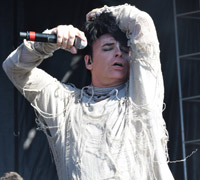 Riot Fest has long taken in the industrial side of rock, but if they’re playing in the day, that dark genre often wilts under the hot sun. Not wilting was industrial pioneer Gary Numan on the Roots Stage in the midafternoon heat of Saturday. He and his band were dressed for the apocalypse, straight out of the desert wasteland of Mad Max, which nicely matched their sound and the environment. 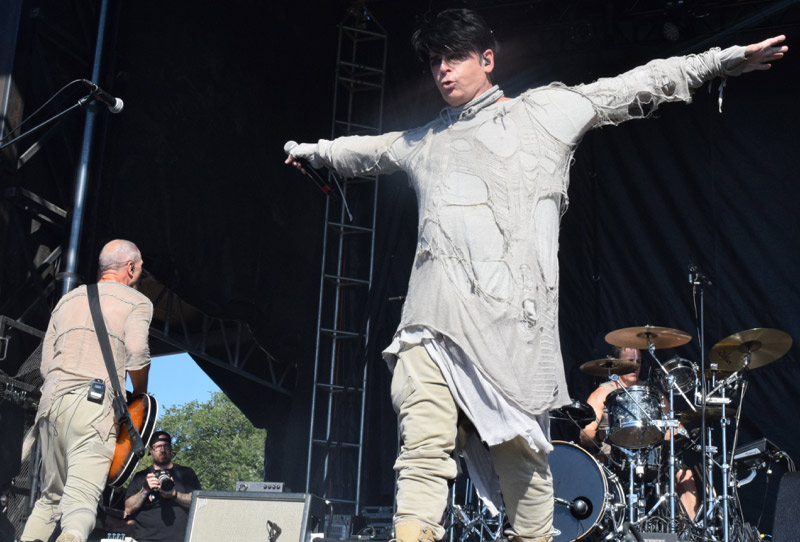 Certain musicians get labeled as prima donnas, divas, difficult, crazy, whatever, but in today’s day & age one needs to examine those assumptions, particularly of female artists, who often get that label too easily (artists of color as well). But that was the reputation Cat Power had coming into Riot Fest, and it didn’t help that she started late on the Riot Stage (and didn’t allow any photos). But if she is eccentric, it definitely works with her music, which almost details what it’s like to be a woman labeled “crazy.” 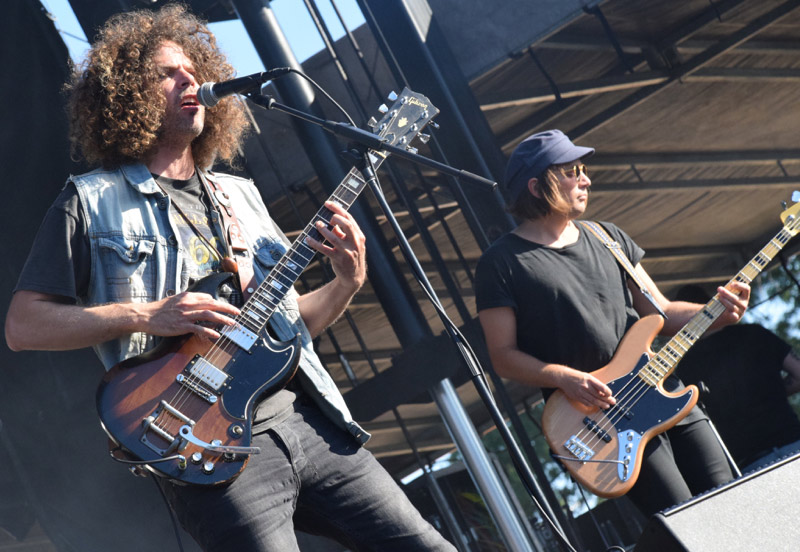 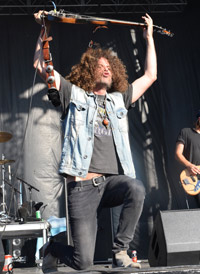 As much as Riot Fest loves rock, sometimes the classic rock gets a short shrift, since that’s what punk was rebelling against back in its day. But Australia’s Wolfmother brought the loud rock in old school style to the Radicals Stage, albeit from twenty-first century artist. It is years since Andrew Stockdale broke out (and the rest of the band left), but he still delivers, whether old songs like “Woman” or new like “Lazy”. And yes, there was a mosh pit. 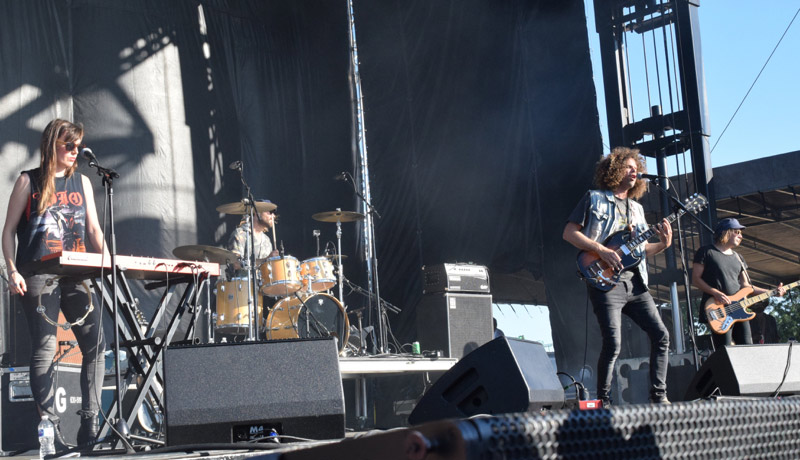 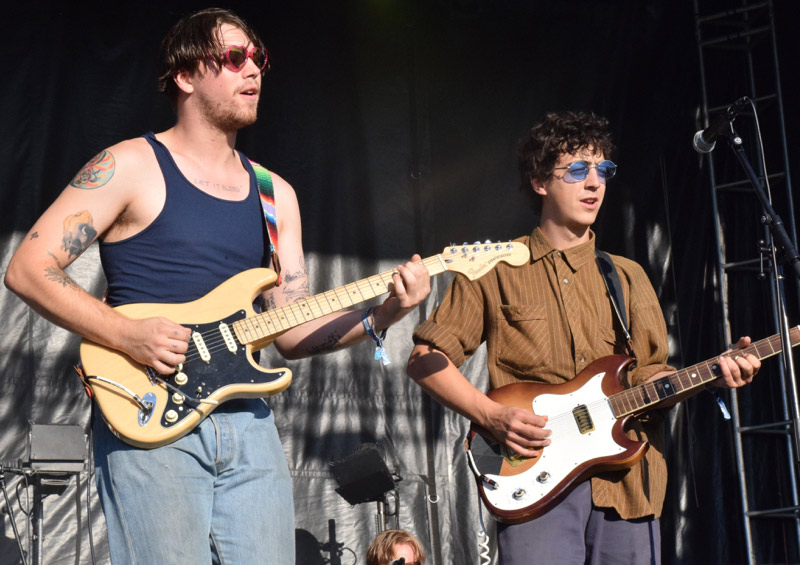 And yes, there was another mosh pit for Chicago’s own Twin Peaks at the Roots Stage. This was to be expected from the wild locals – with their own wild local crowd. 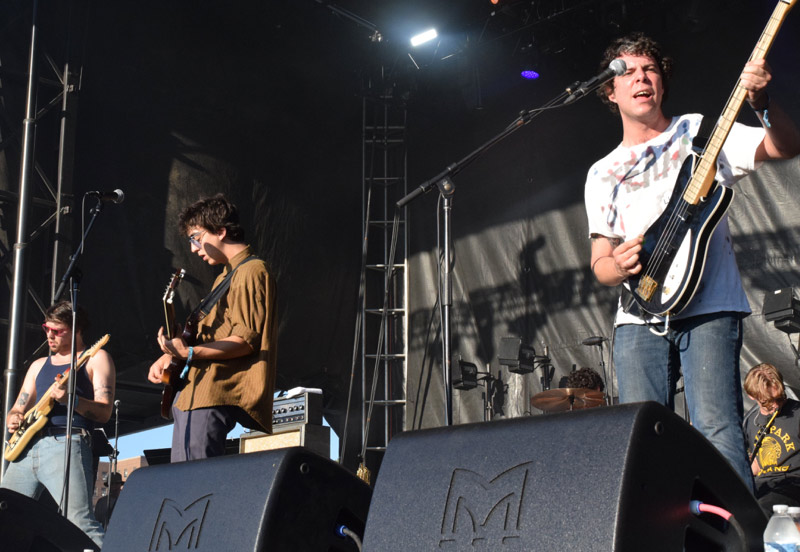 Less expected was the more relaxed, even introspective Elvis Costello. The living legend can pretty much do whatever he wants (looks how he’s managed to pull off his adopted name…), but on the Riot Stage at Riot Fest, one was hoping for more of his classic late seventies/early eighties rock hits. There was “(I Don’t Want To Go To) Chelsea” and iconic Nick Lowe cover “(What’s So Funny ‘Bout) Peace, Love, and Understanding”, but no “Oliver’s Army”, your correspondent’s favorite (he would have to work around him using the n-word in it…). 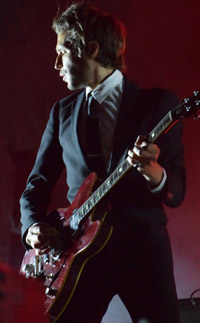 Actually playing their hits, and new material, were Interpol on the Roots Stage. They’re touring off of this year’s strong Marauder (QRO review), but are deep enough into their career to know that people want to hear songs from earliest records Turn Off the Bright Lights (QRO photos playing in full) and Antics (and not poor major label release Our Love To Admire – QRO review). And while singer Paul Banks’ signature baritone gets the lion’s share of the attention, guitarist Daniel Kessler is actually the more interesting one to watch up there (of course, he’s no ex-bassist Carlos D…). 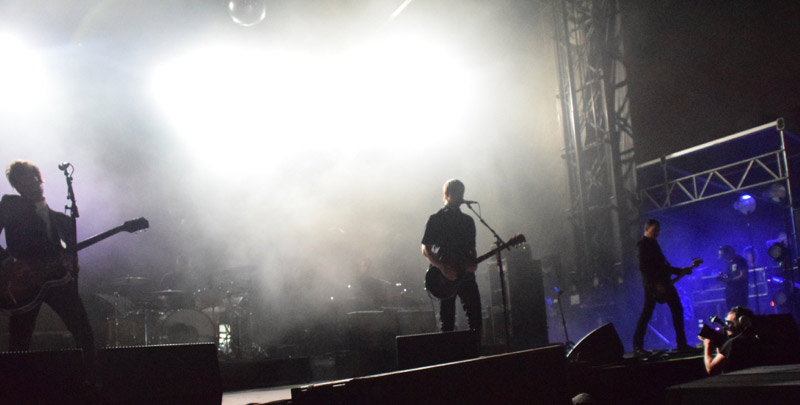 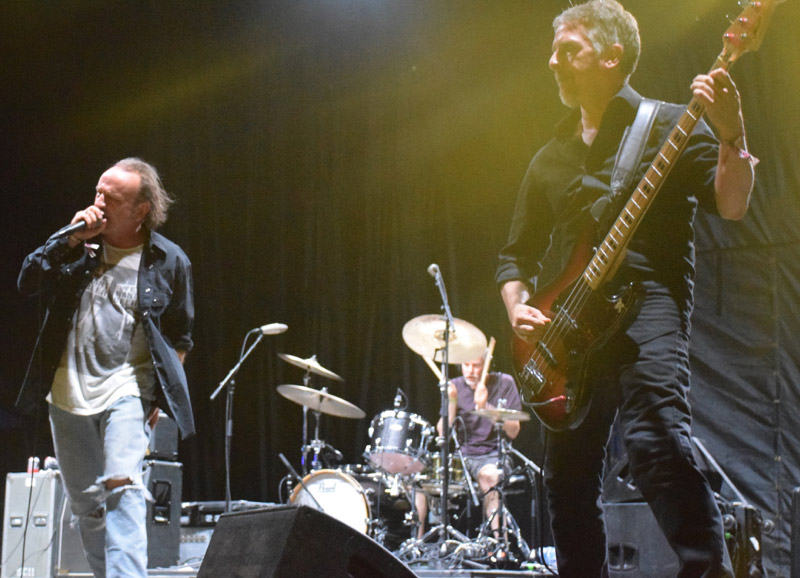 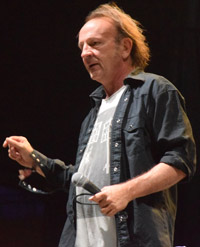 “We’re Interpol!” announced singer David Yow of The Jesus Lizard at the Rise Stage. Austin’s foundational noise-punks have not mellowed with age (or lost their humor). Indeed, Yow went not only into the photo pit, but crowd-surfed – all while singing. He later took off his pants and mooned the crowd, because of course he would. 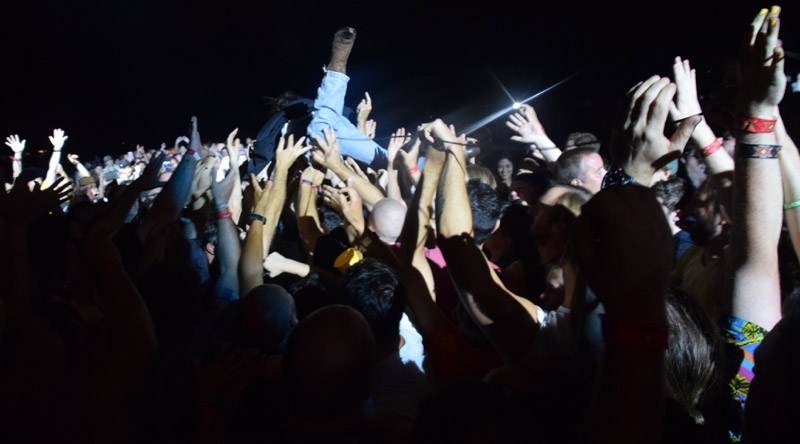 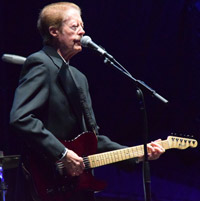 Riot Fest is a great place to catch older legends that you might not go see individually, might not know their material, but have always wanted to check out. Saturday had the likes of Gary Numan, Elvis Costello, and none other than the oldest hand in the game, Jerry Lee Lewis! He’s past eighty, and has had such a tumultuous life Dennis Quaid played him in a biopic (made in 1989), but he’s still rockin’. No, he wouldn’t run around on the Radicals Stage, but it was just such a delight to catch him playing his classic music (and more, like a cover Elvis Presley’s “Blue Suede Shoes”). Because if Jerry Lee Lewis is playing a festival that you’re at, how can you not go see him? 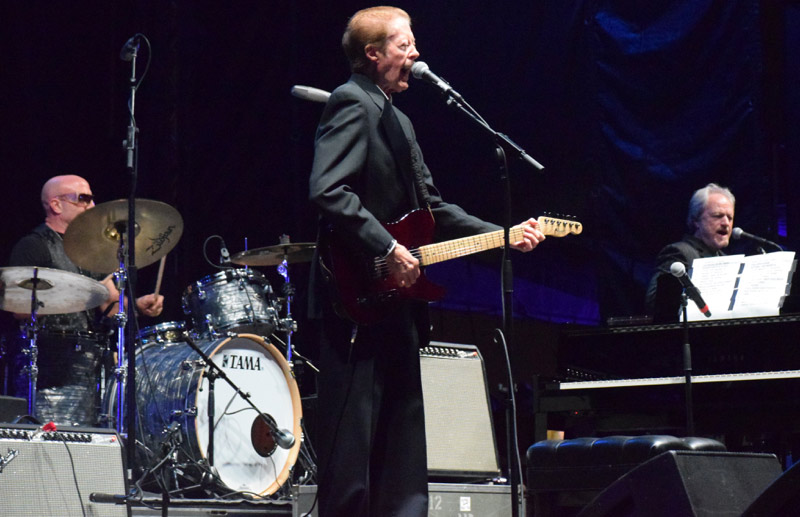 Headlining Saturday night at Riot Fest’s big Riot Stage was Beck. It’s impressive how he broke out almost a quarter-century ago, yet is still relevant. The musical iconoclast covered everything from breakthrough “Loser” (described as being both completely of its time, and completely timeless) to last year’s Colors (QRO review). He even did a cover of Gary Numan’s classic “Cars” – with Numan, making it way better than all the Blink-182 covers of Friday.

[note: Beck also didn’t allow any photographs, but he’s not called ‘difficult.’ Well, photographers were complaining, but they played his Scientology…]