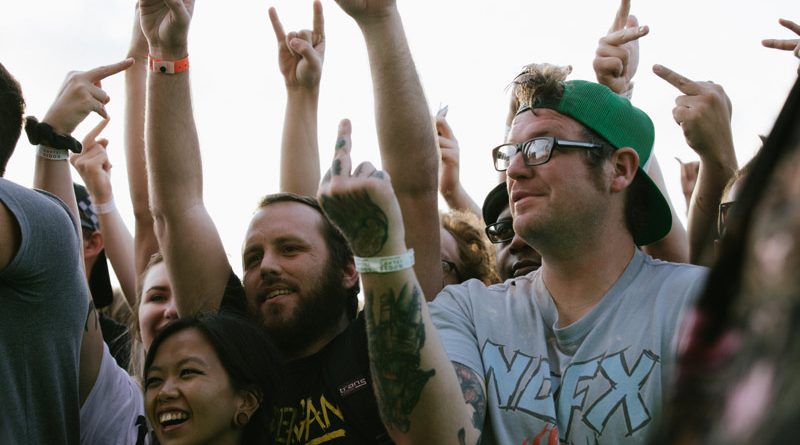 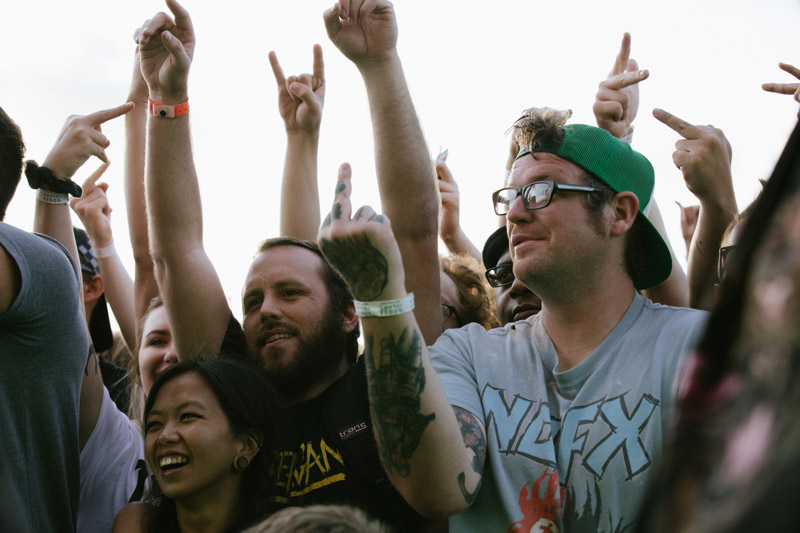 The clear skies of Day One continued, though without the Windy City wind, making for a hotter day overall. It was also a popular day – one only had to see the crowded subway heading back afterwards, packed to the gills (even if you did the smart move and went to the Kedzie stop, which might have been one stop further from downtown, but was a closer walk to & from the festival). 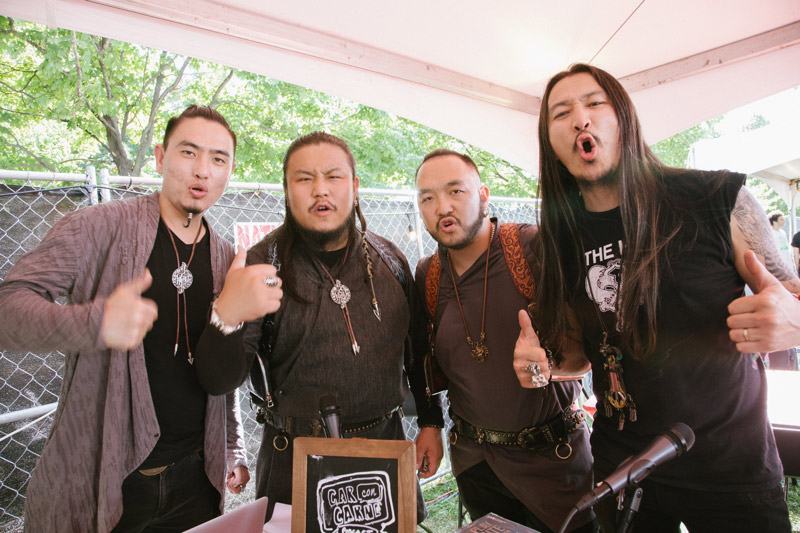 From the other side of the globe, The Hu came open the Riot Stage. Mongolian folk-metal with throat singing & morin khuur, in Mongolian, they had some videos go viral and carry them to Riot Fest. And they did not disappoint, with a very impressive stage presence and a new album just out the day before, The Gereg. 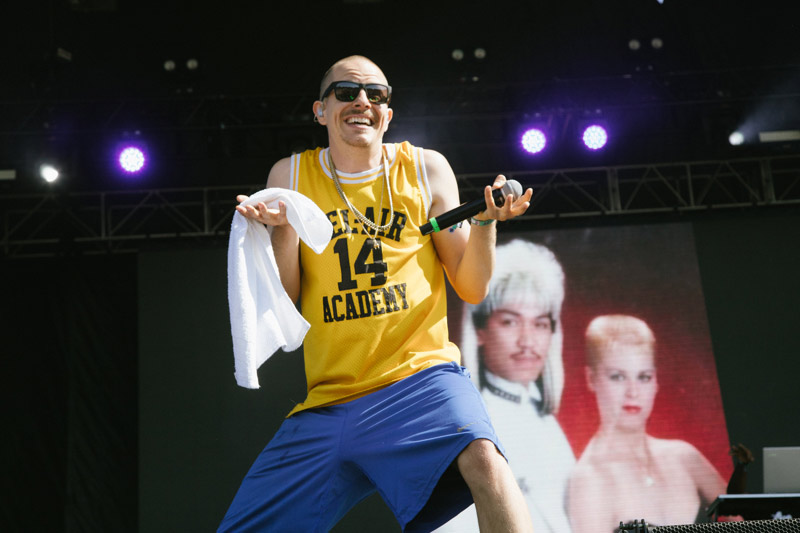 Over at the Rise Stage was Cherry Glazerr, who brought their indie-punk & more to early in the day, playing mostly off their new record, this year’s Stuffed & Ready (QRO review). But you couldn’t blame fans for not sticking around at the Rise Stage for Surfer Blood, or the rapper Prof at the Radicals Stage, when there was real (fake) blood at Riot Stage for GWAR. 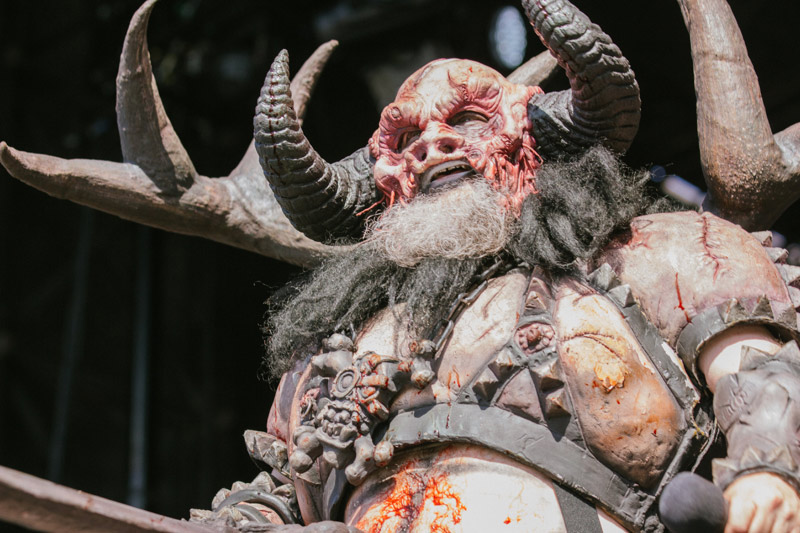 “We heard there was a riot at this festival, so we’re shutting it down!” The scumdogs of the universe brought the full GWAR experience to their umpteenth Riot Fest, “Metal Land”. They defiled a pregnant Katelyn Jenner, Donald Trump, and dead children (“It’s not pedophilia, it’s necrophilia”), as well as songs like “Fuck This Place” and their cover of AC/DC’s “If You Want Blood (You Got It)”. 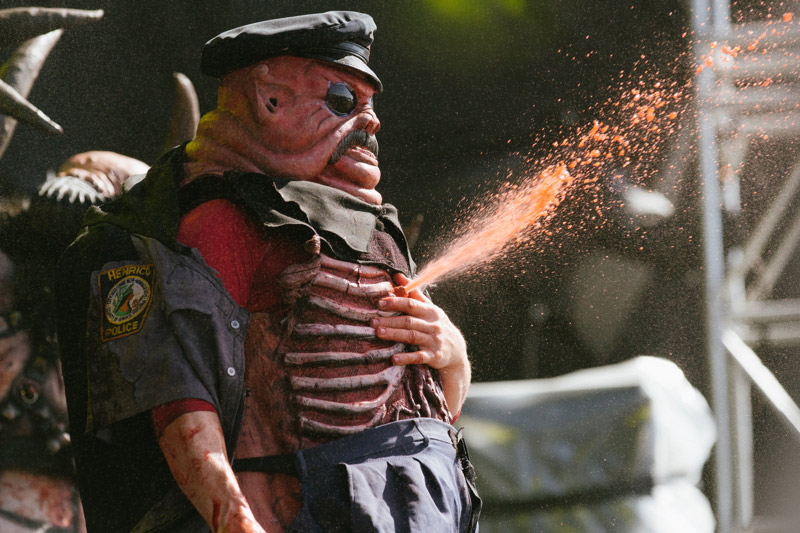 [note: later, GWAR members were in the press tent, in full regalia. Your correspondent was behind one of them at the bar, and, without any cash in the scumdog’s costume, had your correspondent cover the tip] 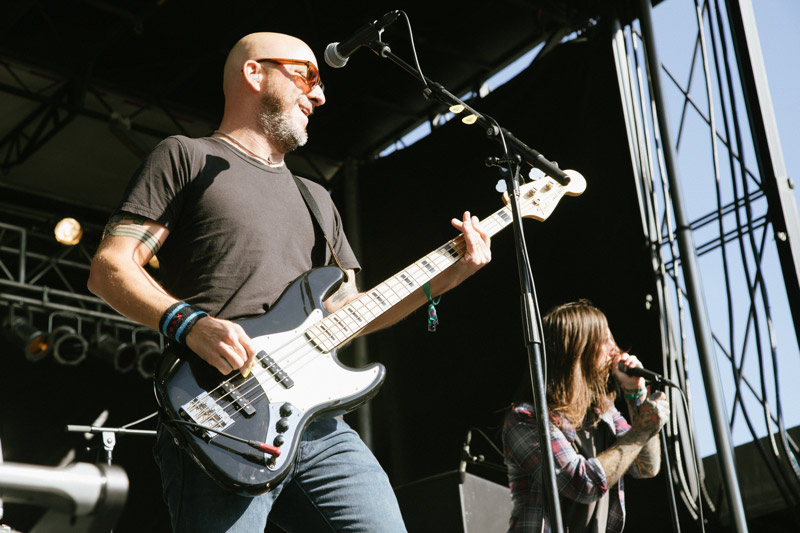 With Slayer’s final area show headlining the day, Saturday leaned into the metal, including side-supergroup The Damned Things (who include Scott Ian of Anthrax and even Joe Trohman & Andy Hurley of Fall Out Boy) on the far Rebel Stage. But this was still Riot Fest, so there was still emo-punk like Turnover on the Rise Stage and The Story So Far on the Roots Stage. 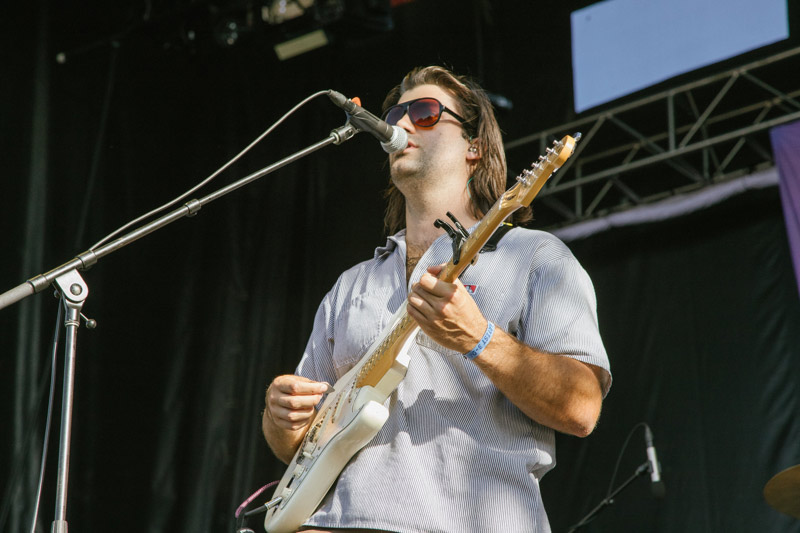 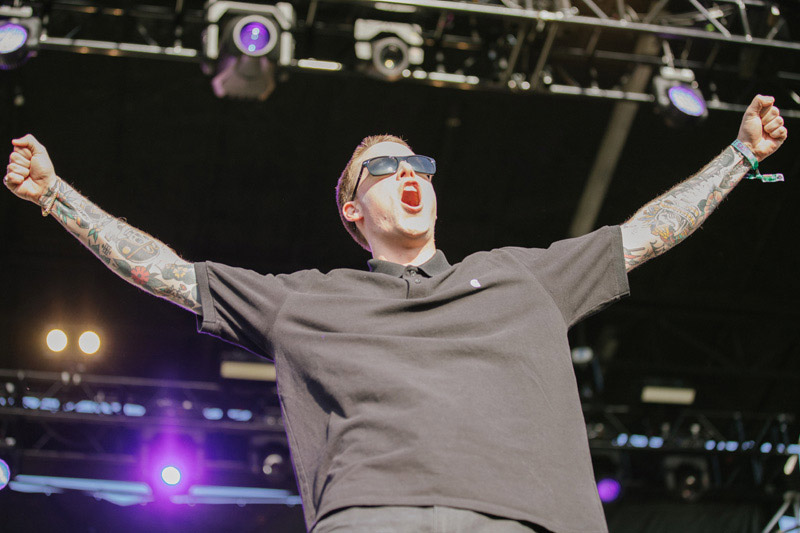 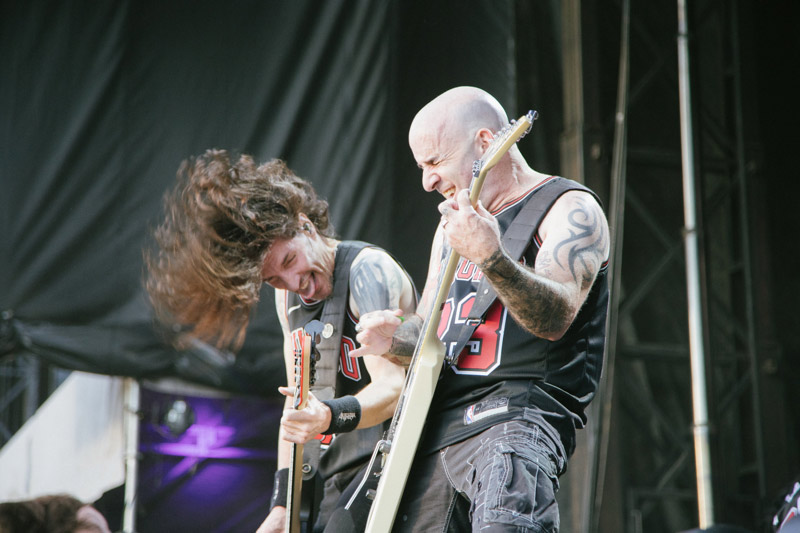 Yet the big opening metal salvo was Anthrax doing a fan request set list on the Riot Stage. They and Slayer naturally go together in most people’s minds, like when they played as part of the ‘Big Four’ in metal with Metallica & Megadeth at Yankee Stadium in 2011 (QRO live review), but if Slayer is pummeling dark metal, Anthrax is the more fist in the air fun metal. Or, to put it another way, Anthrax is your daytime party metal (they were all wearing Chicago Bulls jerseys with their names on the backs), Slayer your evening thrash, which is exactly what happened at Riot Fest ’19. 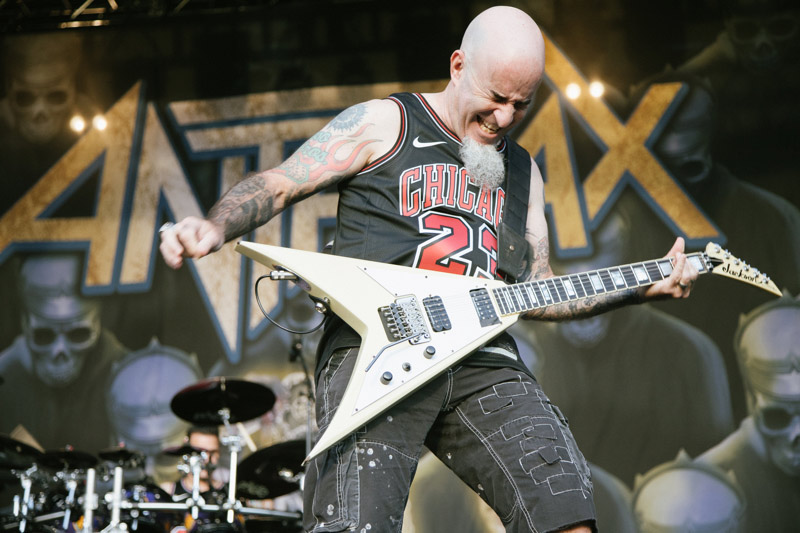 As day turned to night, the conflicting sets kicked in, forcing one to make choices. The big, emotional rock of Manchester Orchestra at the Rise Stage, a perfect Riot Fest fit? The grade-A agit punk of Rise Against on the Roots Stage, who paid tribute to both Riot Fest & Slayer for doing it for so many years, another perfect fit for the festival? Or those who are nothing to fuck with, Wu-Tang Clan at the Radicals Stage, who are a rap collective able to bring the ruckus & cross the genres, playing not their first Riot Fest (QRO photos at Riot Fest ‘14)? Try to bounce between stages? Couldn’t go wrong with any choice. 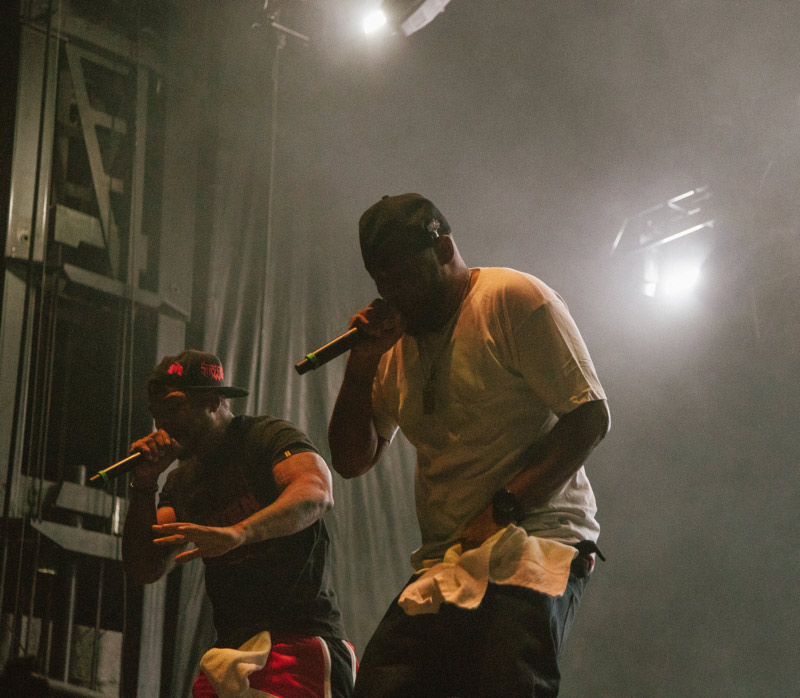 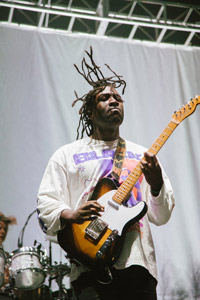 And if you were a hipster indie kid who remembers the early 2000s heyday and not a metal head? Why, there was Bloc Party doing their 2005 breakthrough classic Silent Alarm on the Rise Stage to close out the night. Admittedly, Bloc Party haven’t matched that since, but it’s not like The Strokes have ever matched Is This It. The start of their U.S. Silent Alarm tour, did they the hits like “Banquet” and “Like Eating Glass” to a packed house that singer Kele Okereke thanked for, “Not getting their Slay on – they sound great, by the way.” 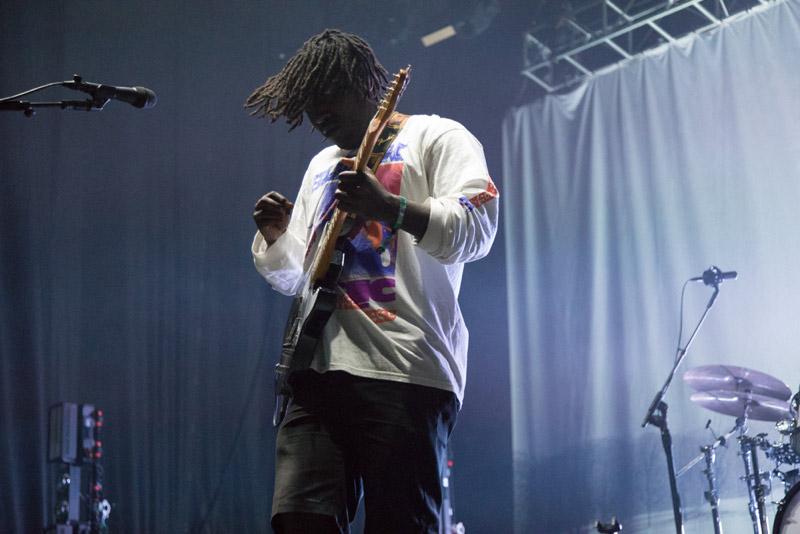 Yeah, you could hear Slayer at the relatively nearby Riot Stage, but you could hear Slayer all the way in Milwaukee. Billed as their final tour, with this their final Chicago/Milwaukee show, it was the big finish that made you put your devil horns fingers in the air. There seemed to be fire shooting out on stage for every song. It would have made any vampire afraid. Relentless & repentless, it was soooo metal. It was Slayer. 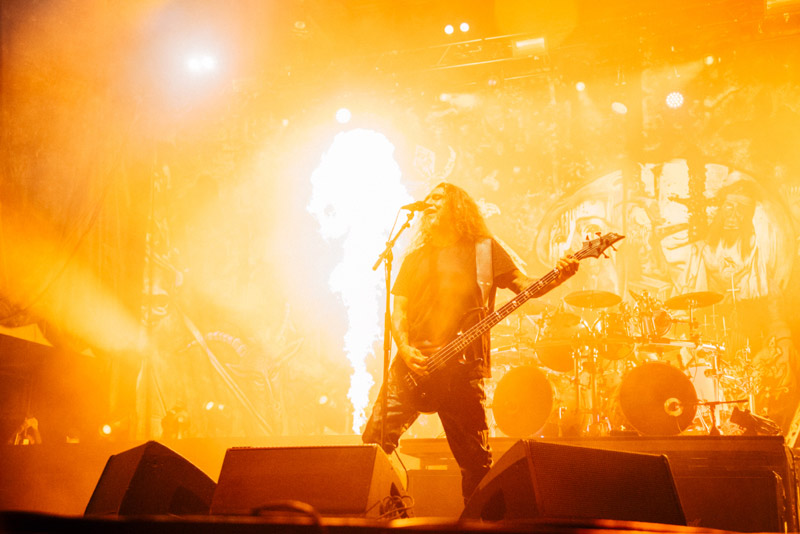