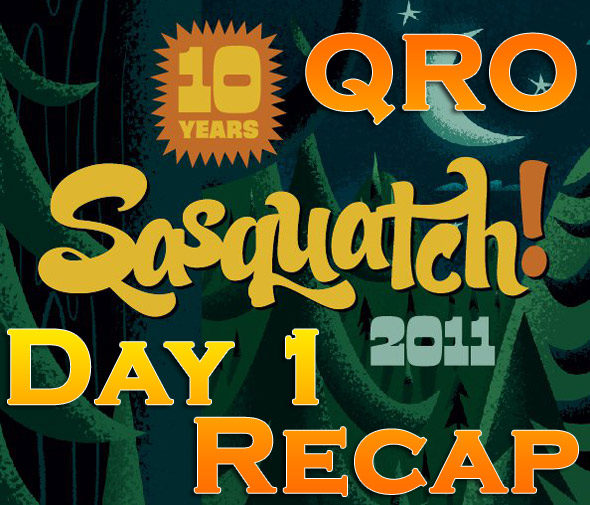 For the past decade, more and more people have been flocking to the middle of Washington State for Sasquatch! Music Festival.  It wouldn’t be an understatement to say that the event takes place in the middle of nowhere – where the desert meets the gorge, where you may come to be one with nature and not necessarily to party like a rock star.  But that’s what exactly happens every year over the Memorial Day weekend.  This year, the outdoor festival celebrates its 10th anniversary and expected to be bigger than ever, expanding further outside of its indie rock roots to embrace various genres, even bordering on mainstream with major label artists.  In addition, comedians and DJs are also included in the showcase to provide attendees even more options to the three and a half day of debauchery.

For someone who loves indie music and nature, Sasquatch! sounds like heaven.  While the festival’s allure was strong, tackling camping for the first time in my life wasn’t so.  But somehow, between other correspondents schedule’s falling through and such, I was fated to tackle the daunting task of photographing, reviewing, and camping all by myself.  (Hotel is an option, but they are far and few) And I couldn’t help myself to add even more workload by coming up with five bands, five questions video interview collage project.

On Friday the 27th, I left Portland early in the morning to drive almost five hours to the Gorge Amphitheater.  The first act went on at 4pm.  Gates opened at 3pm, and I had my first interview at 3:30pm.  Surprisingly, I made it to the camping entrance before 2pm.  Though I had rehearsed how to pitch the tent before the journey, still needed a bit of help from my neighbor.  Then trekked a mile to the festival gate and I waited along with other camera-accessorized press members to get our passes. 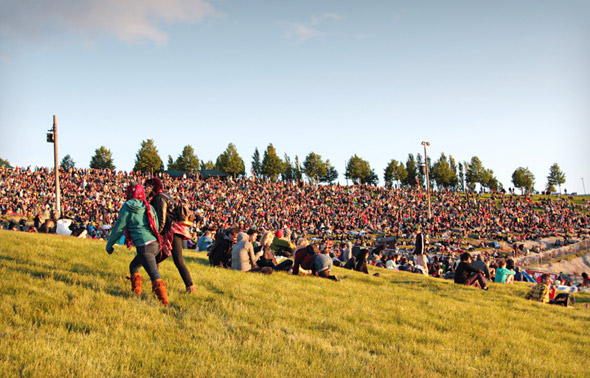 With a bit of time to kill before my interview with Rival Schools, I stopped by the media building, located in between the Bigfoot and Yeti stage.  Utilitarian tables and chairs, and few comfy sofas decorated the very basic shack.  In the email, they had mentioned that food was being provided this year.  I totally thought this meant sandwiches or at least enough snacks to get me by without having to open my wallet.  Bags of Popchips (Sasquatch! sponsor) were the only food option.  Big iced buckets of Gorge water, Coca-Cola sodas, and Red Bull were the beverage options.  Coffee drinkers would have to dish out $5 for a cup from a vendor.  The best part about the media area was the real bathrooms vs. rows of Honey Buckets stationed next door, and the porch area with the view of the Yeti stage.

Though I did my research and received advices from past Sasquatch! attendees, I wasn’t prepared for the poor or lack of reception on my iPhone serviced by AT&T (not by event sponsor Verizon).  This not only made it difficult to be a good tweeter, but also made it difficult to meet up for the interviews.  Next time, I should send a photo of myself to the band before leaving home. 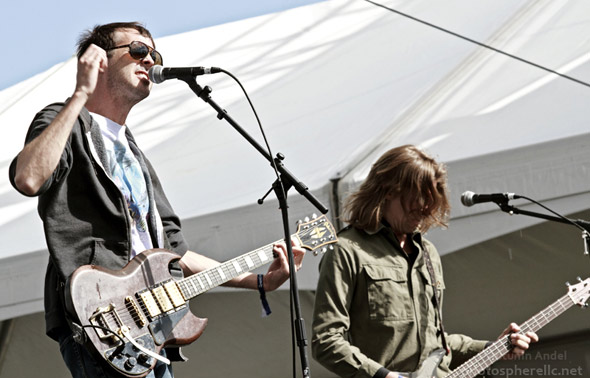 Click here for photos of Rival Schools at Islington Academy in London, U.K. on April 19th, 2011 in the QRO Concert Photo Gallery

Click here for photos of Rival Schools at O2 Academy in Birmingham, U.K. on April 18th, 2011 in the QRO Concert Photo Gallery

Click here for photos of Rival Schools at Garage in Glasgow, U.K. on April 17th, 2011 in the QRO Concert Photo Gallery

Click here for photos of Rival Schools at Academy 2 in Manchester, U.K. on April 16th, 2011 in the QRO Concert Photo Gallery

Click here for photos of Rival Schools at Electric Ballroom in London, U.K. on April 15th, 2011 in the QRO Concert Photo Gallery

Click here for photos of Rival Schools at Muffahalle in Munich, Germany on April 12th, 2011 in the QRO Concert Photo Gallery

Click here for photos of Rival Schools at Arena in Vienna, Austria on April 10th, 2011 in the QRO Concert Photo Gallery

Click here for photos of Rival Schools at Astra in Berlin, Germany on April 9th, 2011 in the QRO Concert Photo Gallery

Not sure if it was part of the design, but Friday’s lineup could mostly lumped into hard indie rock.  A more of a warm up day, one could catch most of the nine acts.  The post-hardcore Rival Schools kicked off the festival, returning after an eight-year hiatus with their sophomore effort (if you don’t count that unreleased 2003 album), Pedals (QRO review).  Their guitar-driven rock songs had plenty of melodies to be accessible by any unfamiliar listeners. 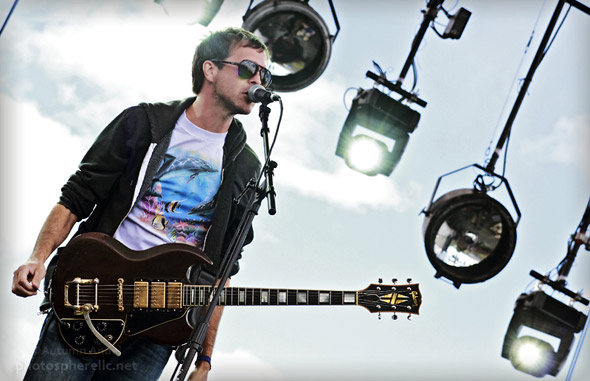 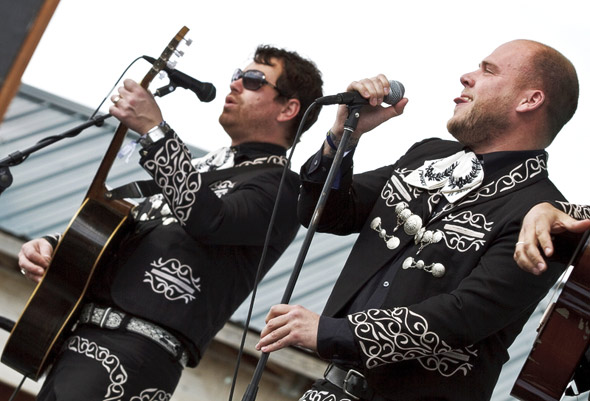 Click here for photos of Mariachi El Bronx at Music Fest NW 2009 in Portland, OR in the QRO Concert Photo Gallery

Half an hour later, Mariachi El Bronx entered the smallest of the outdoor stage, Yeti.  The alter ego of Los Angeles’ punk outfit, The Bronx (see below), the members dressed up in matching outfits and featured instruments like trumpets, Spanish guitars, and a fiddle.  While most of the band members played stoically, singer Matt Caughthran couldn’t wipe the smile off his face. 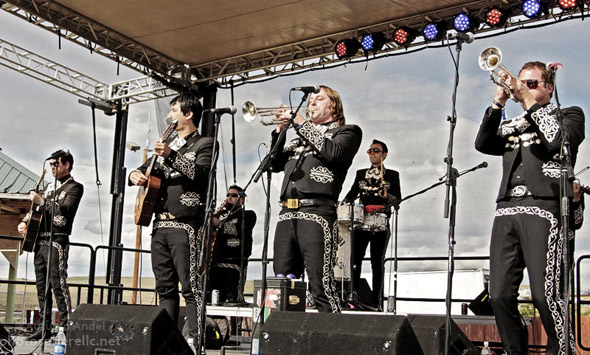 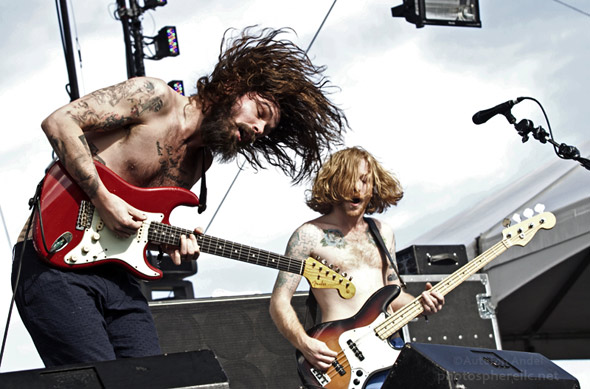 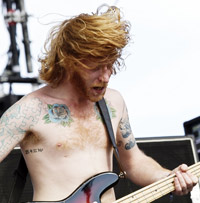 Then I headed back to the Bigfoot stage to catch Scottish alternative rockers, Biffy Clyro.  Regulars in the U.K. charts, the Americans finally are getting a taste of the Mercury Prize nominated trio as they tour the U.S., opening for Foo Fighters (see below).  While the weather wasn’t exactly sweltering hot, the Scots came out shirtless, and who could blame them when their tattoos spoke lot more than a shirt ever could.  Singer/guitarist 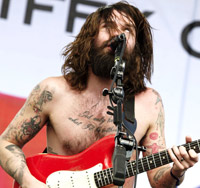 Simon Neil and singer/bassist James Johnston had plenty of hair action – conjuring a feeling that you were somewhere between a grunge and heavy metal show.  It was also the first time I noticed crowd surfing action.  The brawny security guards regularly fished out the surfers but got the sense that they were secretly enjoying the spectacle as much as everyone else was. 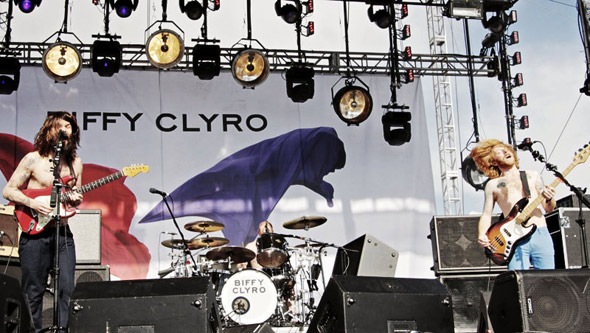 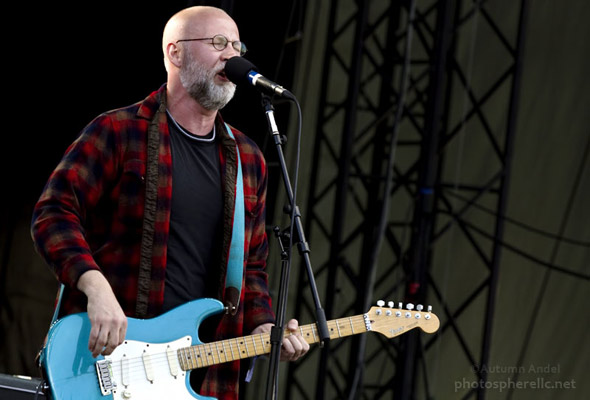 An icon of the indie rock, Bob Mould, most famous for fronting the eighties punk band, Hüsker Dü (QRO spotlight on), played alone with his guitar on the Sasquatch main stage.  Not every press member was lucky enough to get a photo pass to the main stage so most of the time, I had to raise my camera from behind the crowd, and hoped that I got 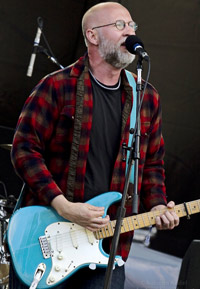 something halfway decent.  If you were a fan of Mould, the performance may have been captivating, but for someone looking for a visual feast, this was about as interesting as watching grass grow.  Not so much because Mould is not about glamour and confetti, but mainly because he stood on a giant stage with all these plastic wrapped equipment behind him, making him look like he was some unknown opener for a bigger act. 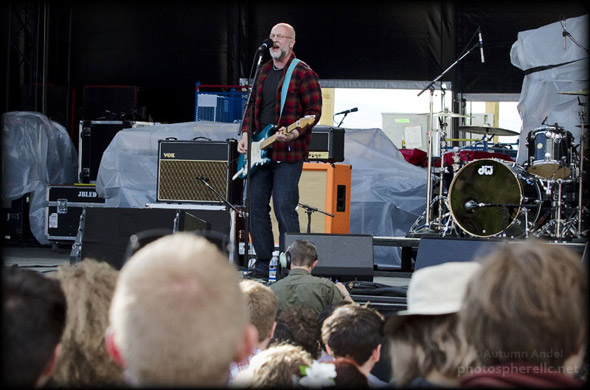 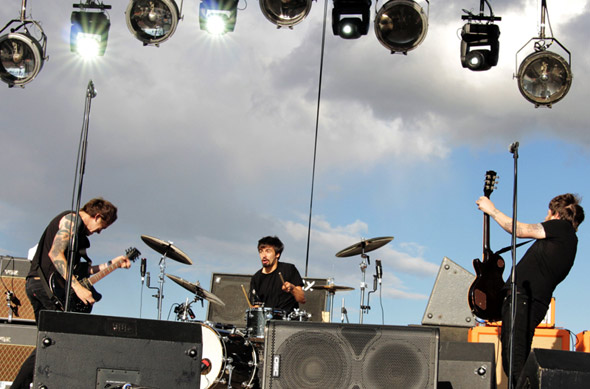 Click here for QRO’s interview with Tom Gabel of Against Me!

Click here for photos of Against Me at The Pageant in St. Louis, MO on March 5th, 2011 in the QRO Concert Photo Gallery 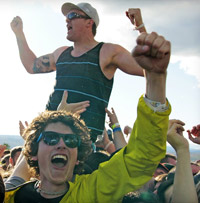 After a couple of songs, I had to hike up the hill, back to the Bigfoot for Against Me! to take advantage of the first three song in the photo pit “privilege”.  Didn’t realize the alternative rockers formed in my mother’s residence of 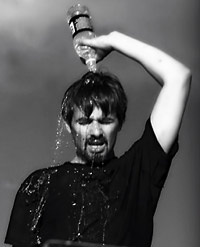 Naples, FL.  If I had to grow up in that sleepy

retirement town, I’d start playing punk music too!  The black-attired men rocked so hard that the drummer had to douse himself with a bottle of water at one point. 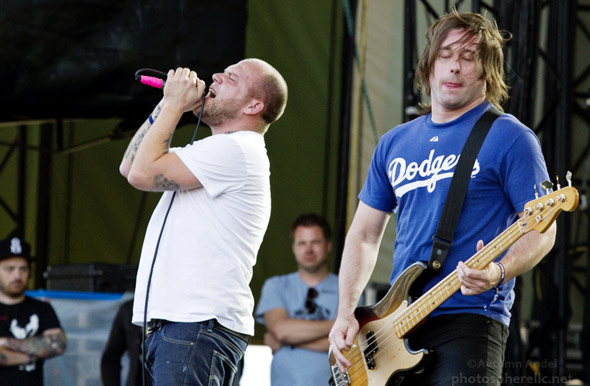 Click here for photos of The Bronx at SXSW 2009 in Austin, TX in the QRO Concert Photo Gallery

Once again, I ran back to the main stage to witness The Bronx.  Now in t-shirts and jeans, the Los Angeles punk rockers became the antithesis of their mariachi persona.  When Caughthran opened his mouth to talk to the audience, he was breathless from screaming on most of the songs.  Every sound produced by the Californians was raw energy bordering on chaos. 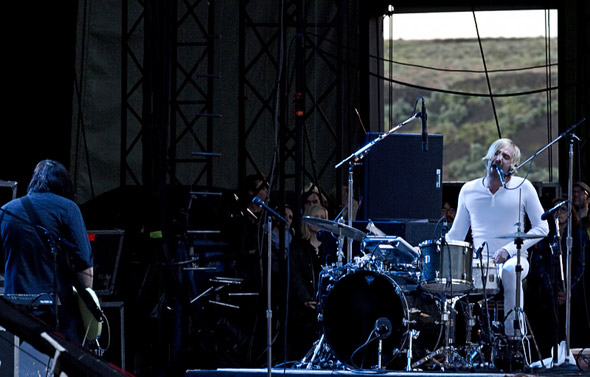 And if The Bronx hadn’t affected your eardrums by end of their show, the next act, Death From Above 1979, should have done the job.  From what I could overhear, the reunion of this Canadian duo was a huge deal for many festivalgoers.  Stephanie Spirovski, who has enthusiastically agreed to help me with the festival review, has a better understanding of this noise/dance punk band; I will not attempt to describe an act I am not familiar with (see below for Stephanie’s recap). 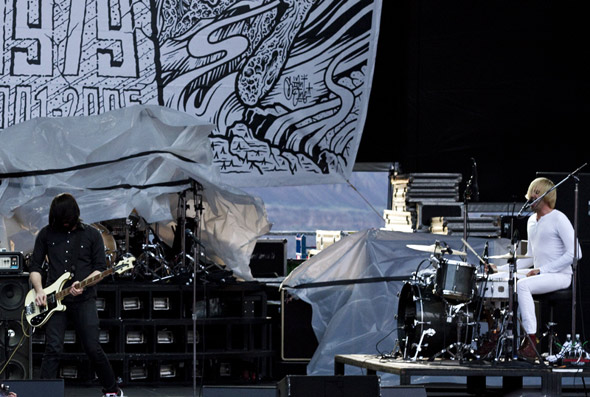 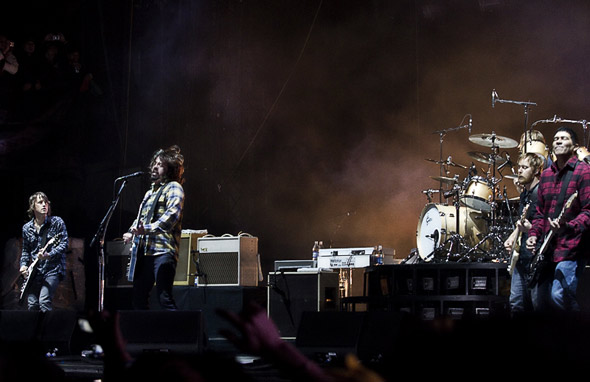 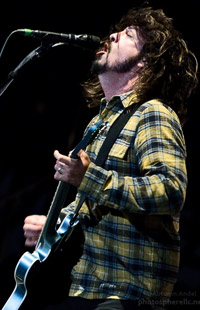 The sun set over the hills of the gorge and temperature dropped fast.  The headliner of the night, Foo Fighters, attracted an amphitheater full of crowd, who has been waiting all week for this rockin’ Friday.  And they certainly got it with Dave Grohl and Co.  The former Nirvana drummer’s hair flayed in all directions as he sprightly moved around the stage.  It looked as if he was still stuck in the nineties; wearing plaid flannel shirt and looking he hasn’t aged since he first formed the band back in 1994. 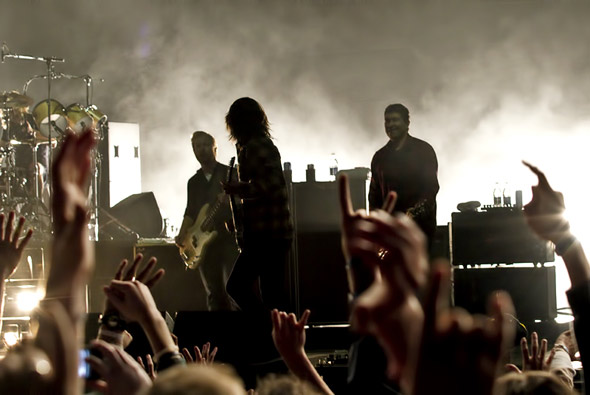 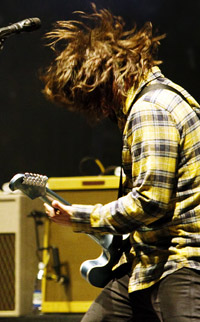 After attempting to get some photos, I tried to get out from the center mass, but the entry way was blocked by a burly security guard who was holding back the savage crowd, trying to get closest to the stage as possible.  After some futile attempts, I headed to the other entrance and finally found my way out of the human jungle.  With four hours of sleep, a long drive, and Popchips for dinner, my body could not endure anymore of the festivities.  So I headed back but briefly stopped by the Banana Shack, where Portland DJ Anjali & The Incredible Kid was spinning their eclectic mix of Bhangra and Bollywood.  The crowd spilled out of the “shack” (more like a giant white tent) onto the surrounding lawn and into the Red Bull building.

The mile walk back to the campgrounds seemed to take forever and you could hear Foo Fighters rockin’ from a distance.  Soon I realized my folly – I forgot where my spot was.  I was so tired and on the brink of crying, thinking I will never get any sleep.  I walked around in the forest of tents, in the dark for an hour before I finally spotted my car and tent.  The temperature dipped to lower 40s and in spite of my heavy-duty sleepwear, extra blanket and foam pad, my feet would take hours to unfreeze.  Nearby campers blasting house music all night didn’t help and neither did the latecomers who decided to camp right behind me.  Headphone on and my whole body under cover, I eventually fell asleep after 2AM. 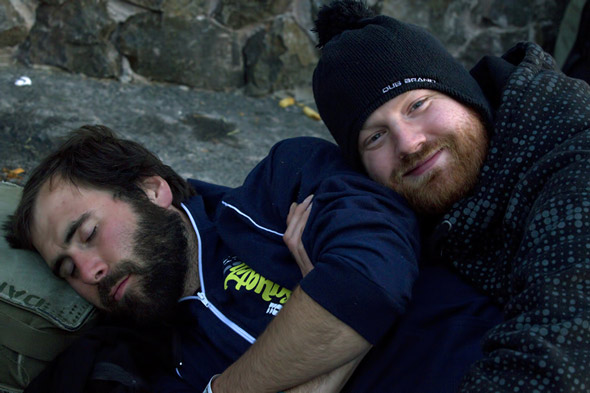 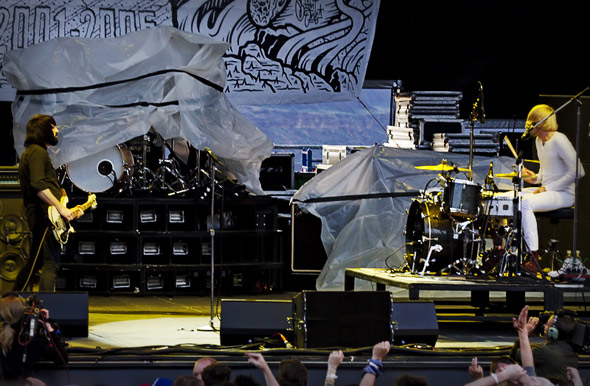 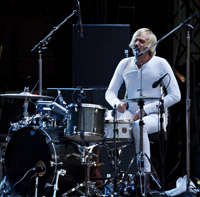 Finally arriving to the Gorge Amphitheatre at sunset after a days worth of traffic I stepped out of the RV and could hear Death From Above 1979 start there sound check.  Not wanting to miss DFA1979’s reunion (the two have been on hiatus since 1996), I made my way through the massive crowds as fast as I could managing to pull a muscle in my shin which was well worth it.  The audience was super charged from the magnetic dance punk that was being emanated from the stage.  Jesse F. Keeler was head to toe in black holding down the bass, synth, and back up vocals.  To compliment him, on his left side was Sebastien Grainger who wore head to toe white screaming out vocals as well as pounding drum beats so hard not one head was kept from bobbing.  The dynamic duo played every song off You’re a Women, I Am a Machine so effortlessly that it left every fan in hopes that the two’s reunion would evolve into a new album.  Completely satisfied from DFA 1979 I decided to call it a night and head back to the campground for some good rest, there was a long weekend a head of me. 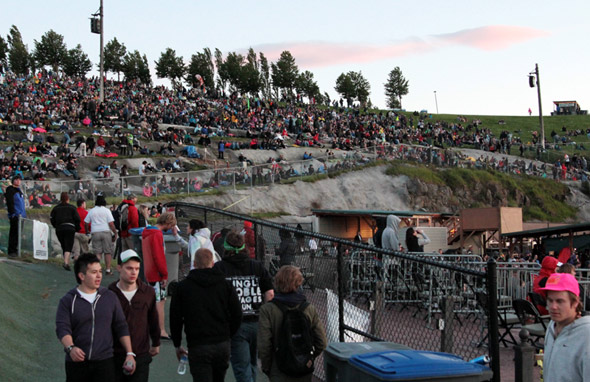 Ford & Lopatin – Too Much MIDI (Please Forgive Me)