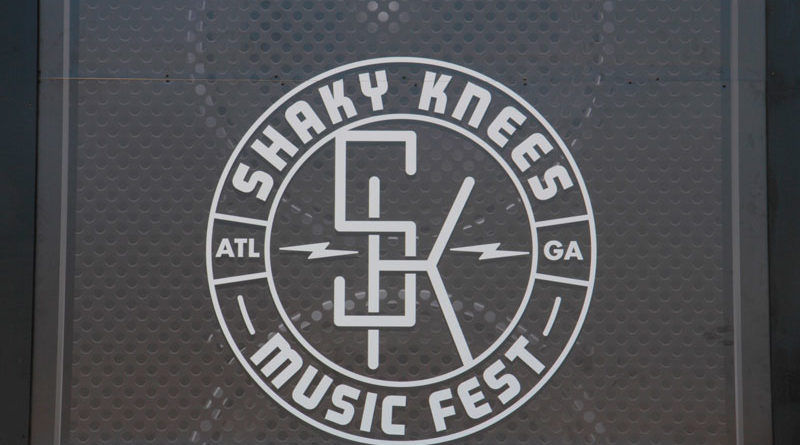 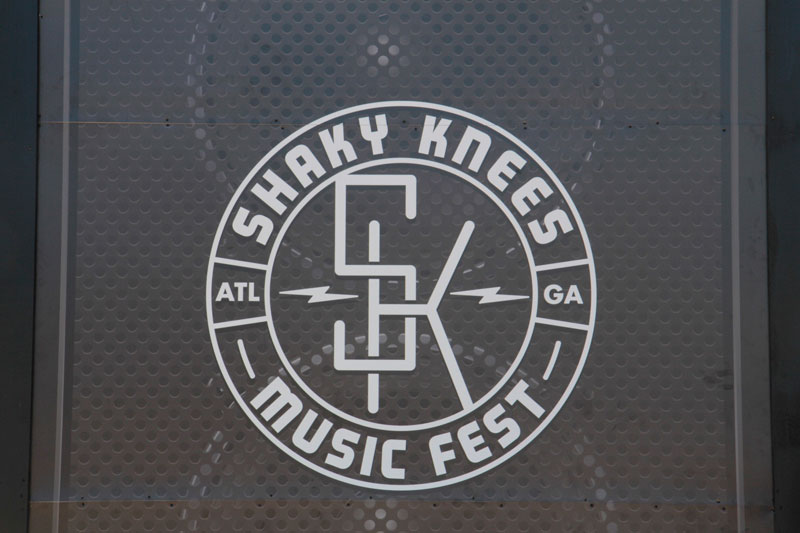 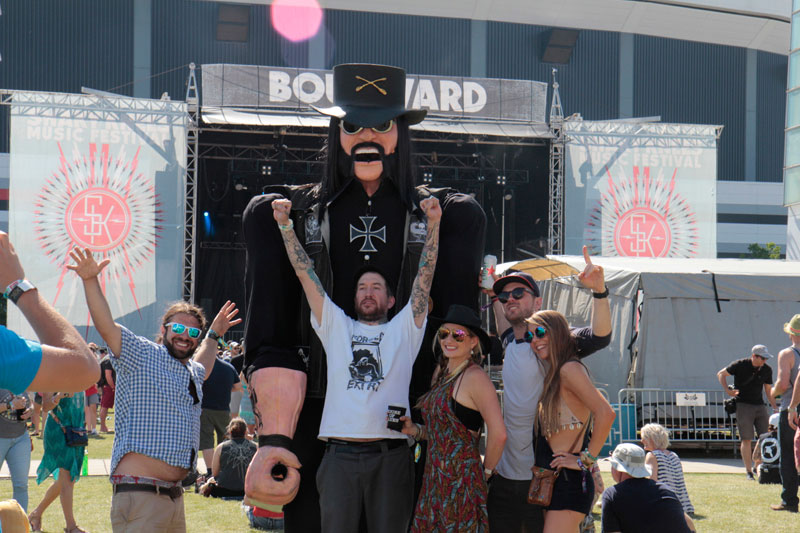 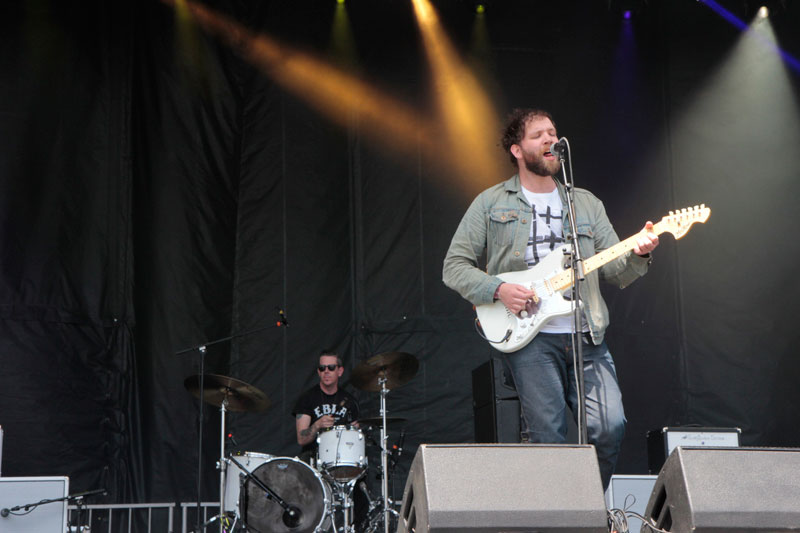 Caveman’s upbeat, delicate sound was a good way to open the sunny day to a small but appreciative audience. Looking around the stage, it was noticeable that the assembled musicians were veterans: the former bassist of Elefant (QRO live review), the former singer from The Subjects (QRO spotlight on), and the drummer from End of the World (QRO photos) made up about half the band, so this was a Brooklyn supergroup. Together, they created interesting, charming, catchy pop tunes that got people swaying and happy. They were on a pre-release tour for new album Otero War. 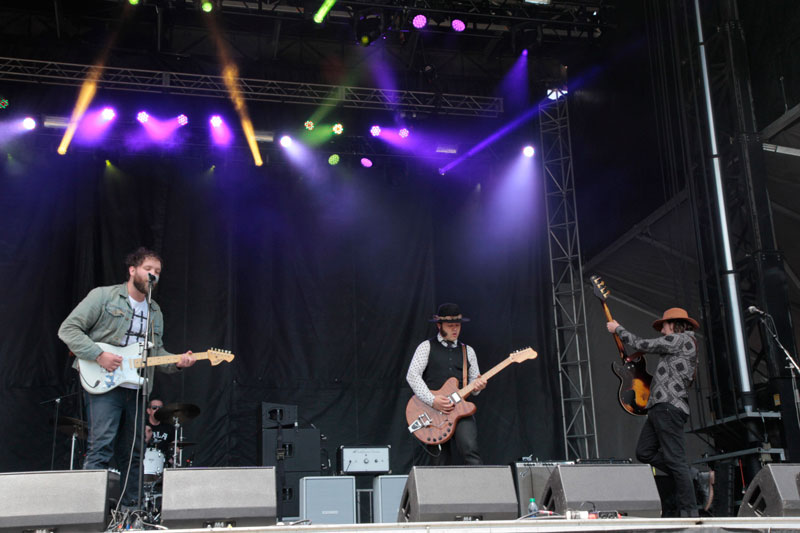 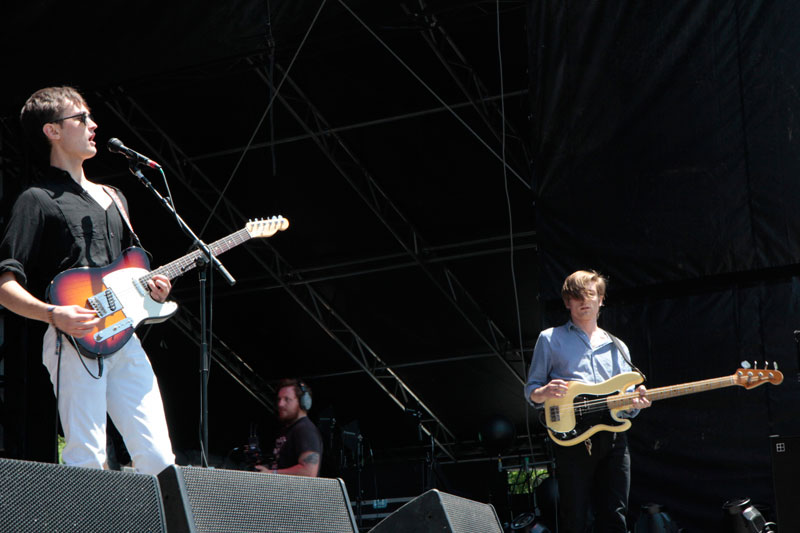 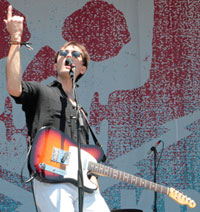 This show was an abrasive romp through the meanderings of post-punk repertoire. The performance by Ought was emphatic but not erratic. The charisma of singer-guitarist Tim Darcy revisited talk style singing paths blazoned by Lou Reed, David Byrne and Luke Jenner. The audience really perked up when they played lead single from the same-titled album, “Beautiful Blue Sky”. 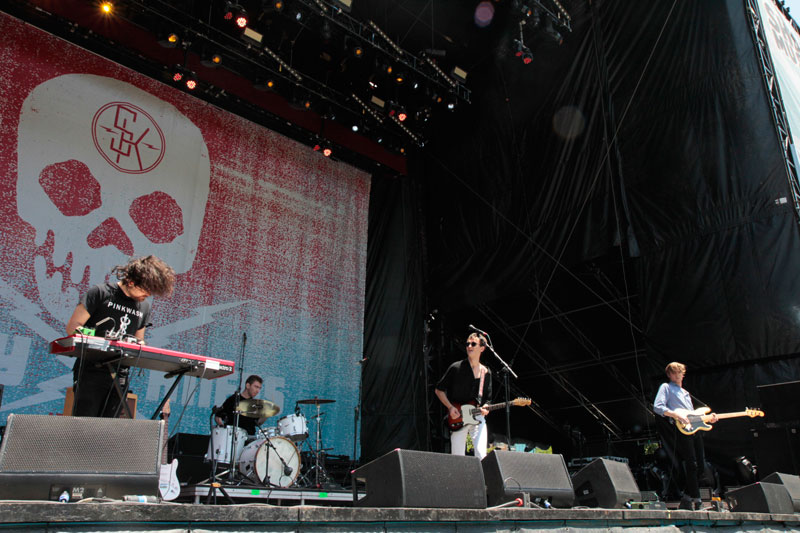 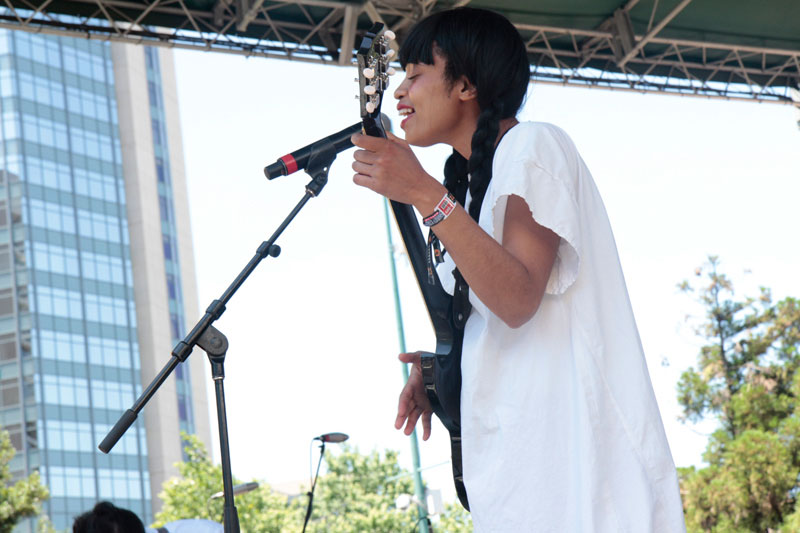 The wide eyed young woman sang what first seemed like almost country, but after a minute Adia Victoria’s eyes were darting randomly, and the lyrics seemed darker, and she also showed adeptness with the guitar. This idea of ‘goth country’ surprised the gathering crowd of fans. Early afternoon sunlight seemed an awkward place for music better suited for an evening campfire setting. 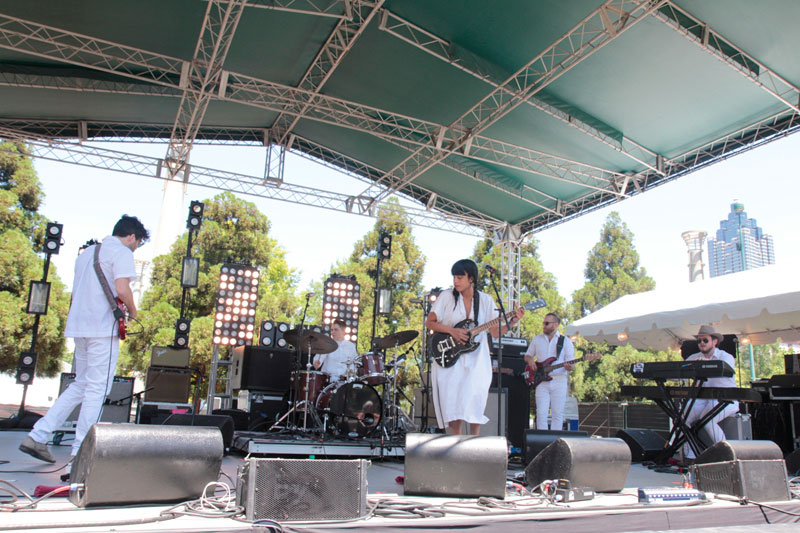 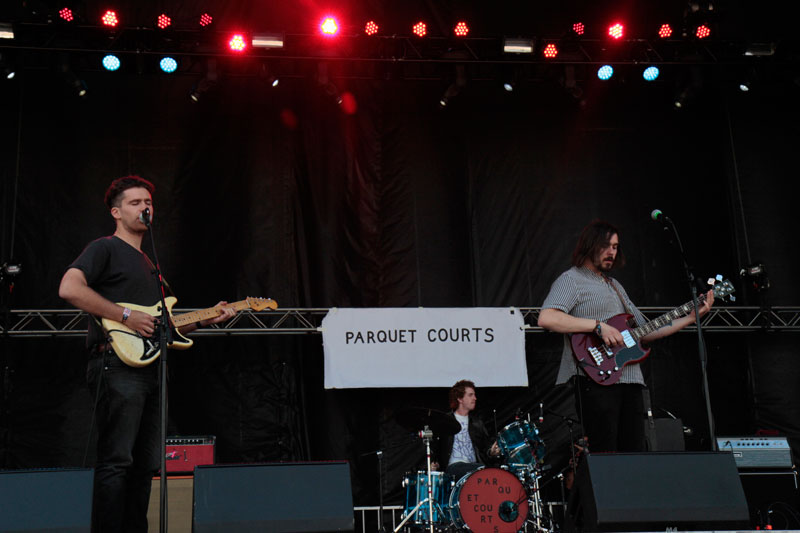 Rhythmic, low-fi sounding twangy guitars broadcasting wicked hooks and head bobbing bass playing suggested California punk, but as Parquet Courts’ set progressed, a strong taste of rockabilly shone through the music. The two singers used short, abrupt syllables in their style of singing. This is reminiscent of the same style that brought people to the sounds of famed bands The Cramps, Mojo Nixon, and X. 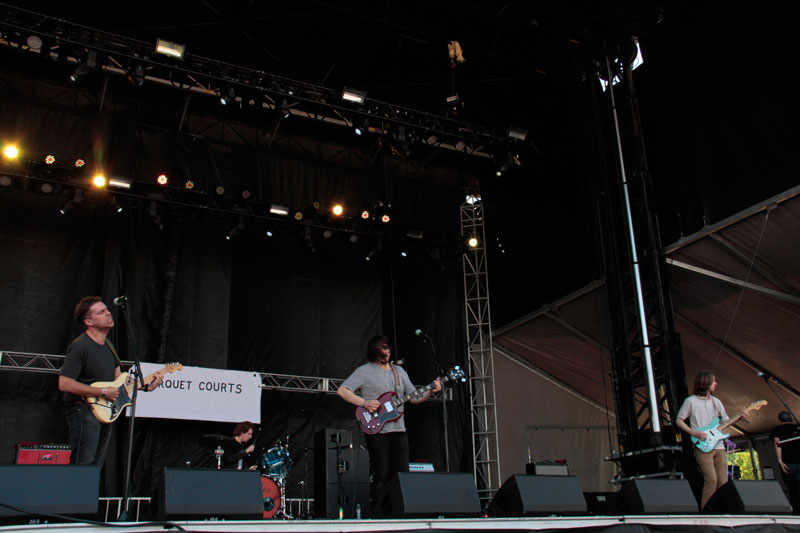 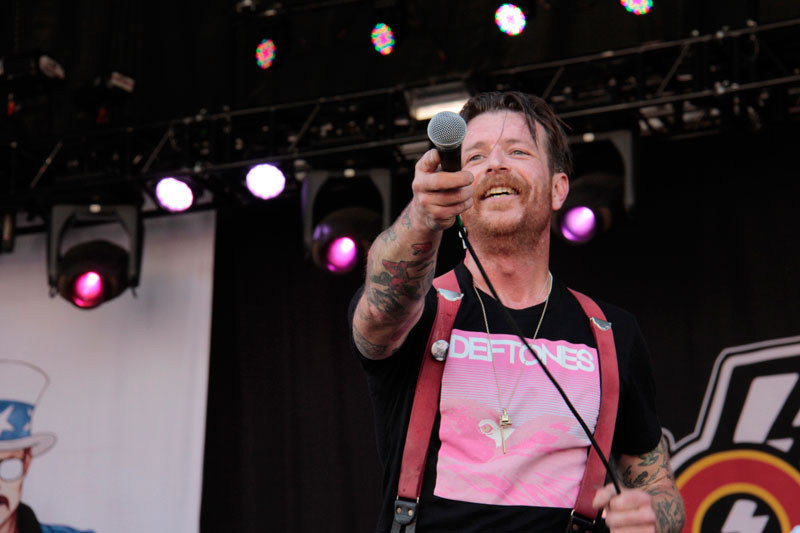 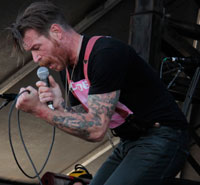 Jesse Hughes holds onto a dream to rock the world with metal music. He hits the guitar on the 1 and 3 beats with big major chord hooks, and brings keeps enough bad-boy imagery to offend one or two people. Like Spinal Tap or Tenacious D, he takes the best ideas of bona-fide metal stars, melts the ideas down, then molds them into 24k solid gold, and really pulls it off. Updating lyrics like “I really wanna be in L.A.”, making them “I really wanna be in G-A” showed the Eagles of Death Metal were having a lot of fun with its big, bad, gaudy metal. 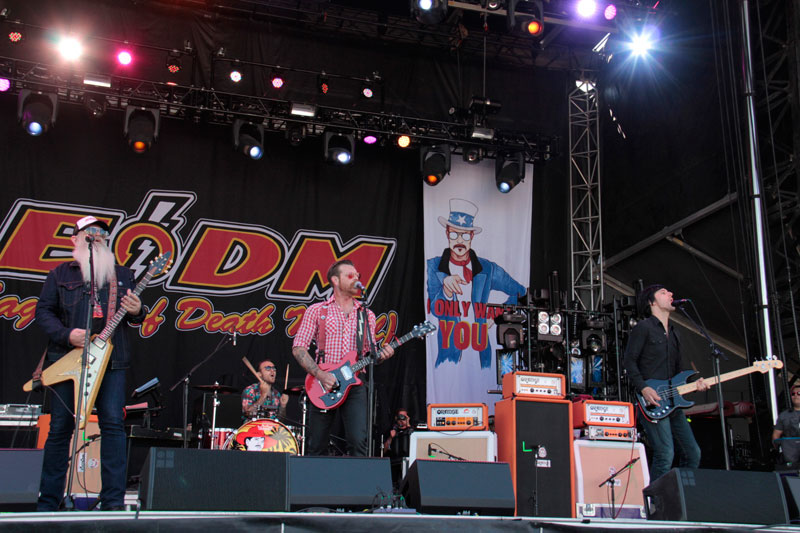 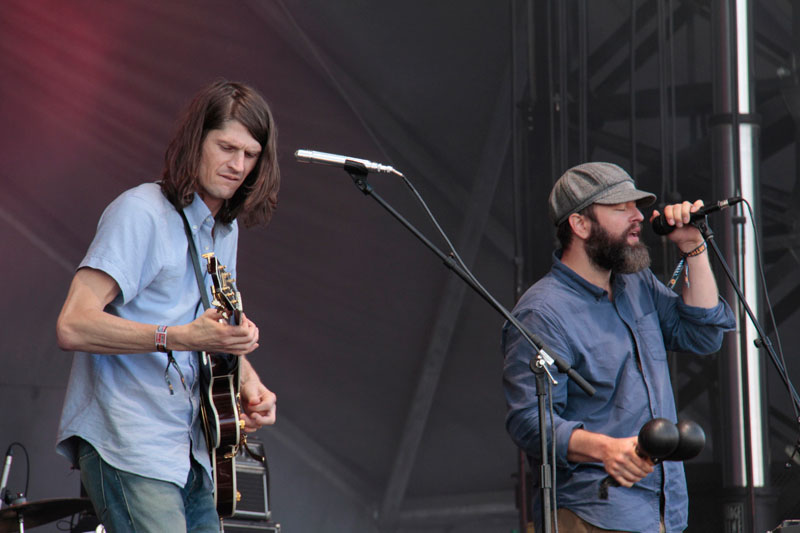 The Black Angels maximized their set by starting to play only seconds after the Eagles of Death Metal left the stage until very near the set time for At the Drive-In. Their psychedelic music grabbed many elements of art-rock:  harmonies, echoes, effect pedals, and wa-wa immediately come to mind. As the set went on, their songs were short and succinct, guitar phrases kept a common home note and the song endings are clean, with no extended jams and no long drawn out final notes. Certainly, they take many traits from or at least show admiration to 13th Floor Elevators or Brian Jonestown Massacre with their song delivery and solid, no-nonsense music. 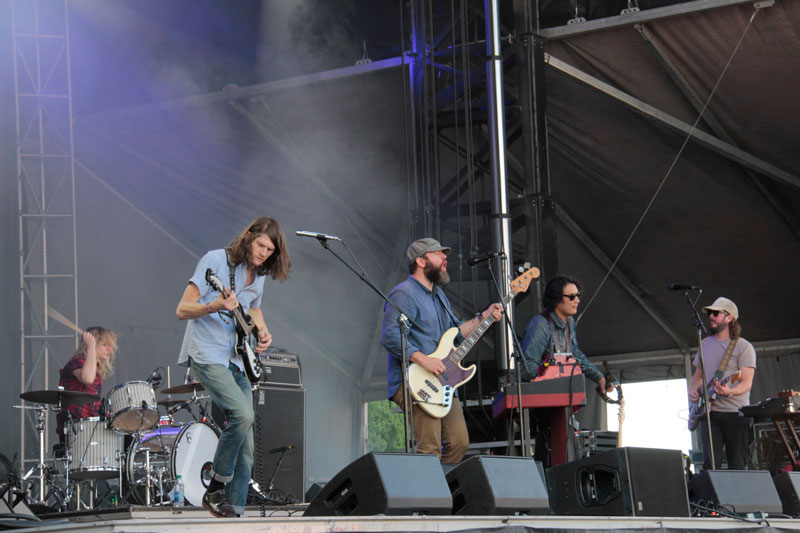 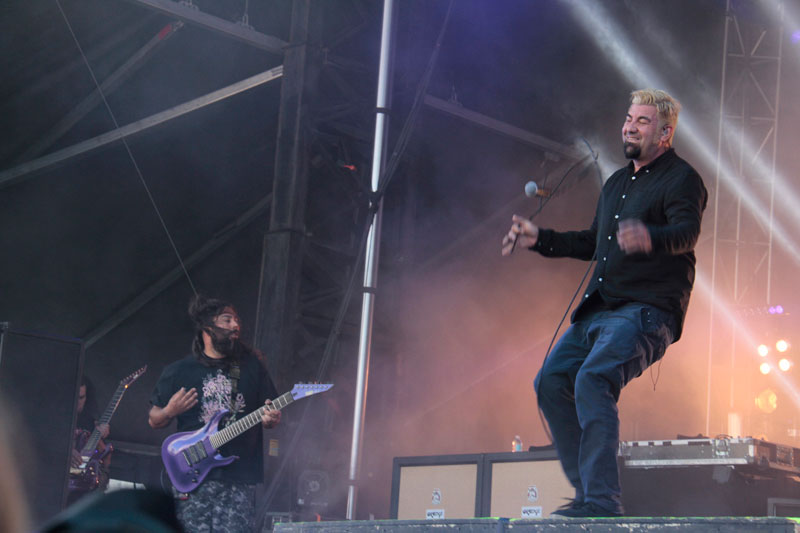 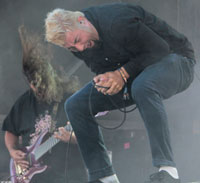 Deftones singer Chino Moreno began the set jumping around full of energy and his tenor voice was resonant and bold. Lead guitarist Stephen Carpenter rarely shows his face, but the audience sees the wall of bouncing hair. It’s 80° Fahrenheit outside, so why was bassist Sergio Vega running around with a toboggan on? The loud, tough, fast, intense music opposed their stage appearance, which seemed more of a circus. Only Moreno showed the fury of the music. The rest of it was comedy, irony, and intensity – all at once. Props to Vega – his stage presence has developed immensely since the Quicksand days. 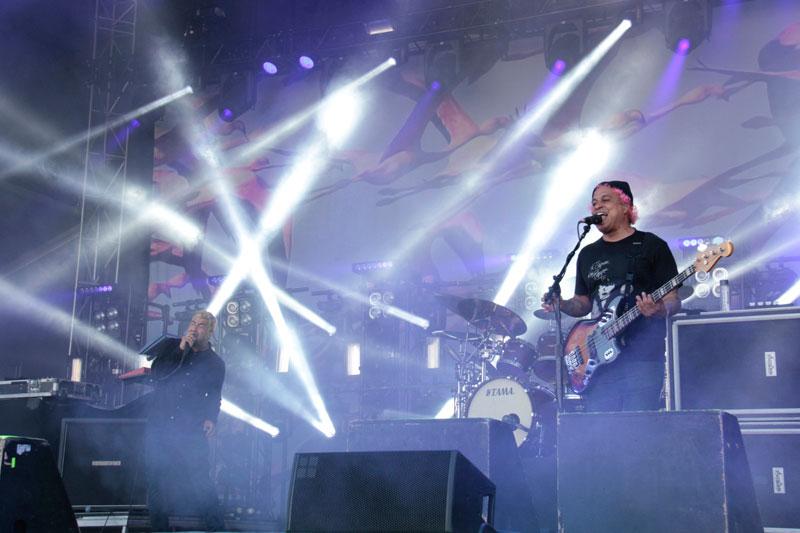 Explosions in the Sky

Amazing instrumentals, no vocals. Being sandwiched between two metal bands is a hard place to bridge, but Explosions In the Sky’s music seemed very appropriate, with the quietly built rising and descending crescendos of guitar work and motion. Rocking out, dancing with guitars, with their motions being slightly off of being synchronized, took away the cheesiness of bands that synched together in the past. Moments of ethereal trills evolved into full metal shrills and wow, what thrills. 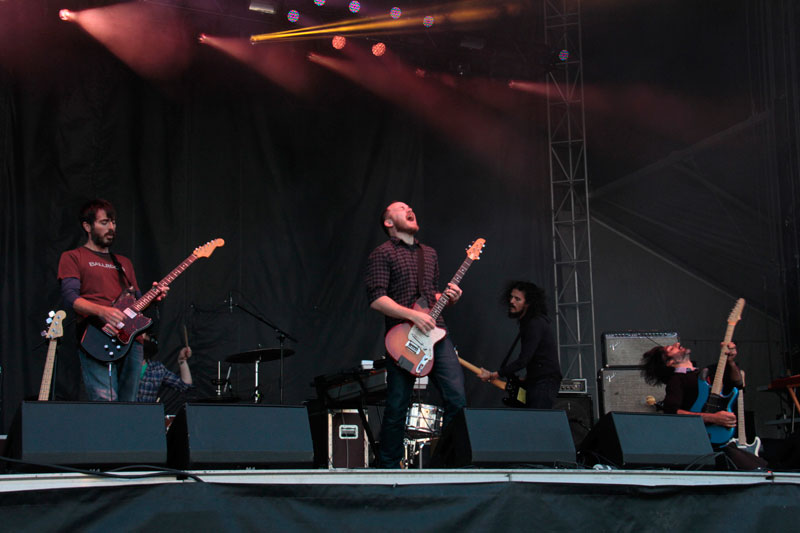 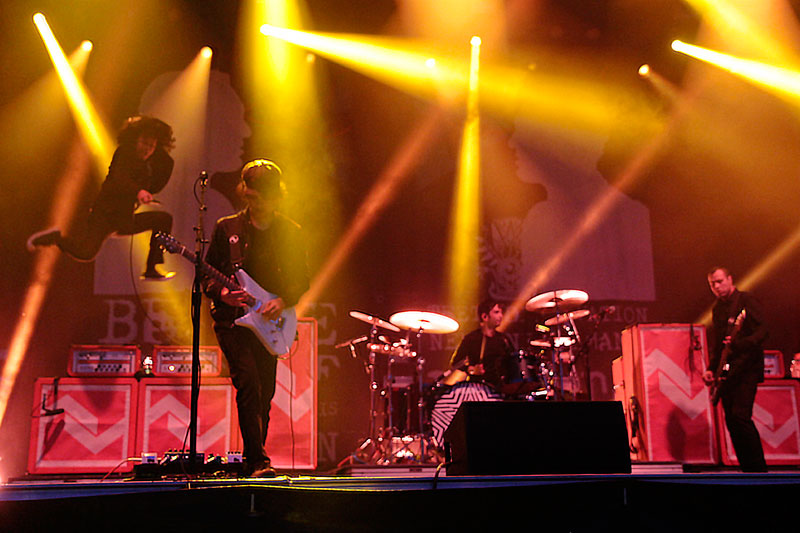 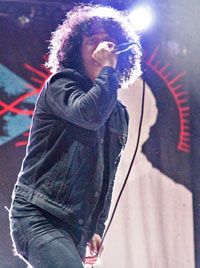 The first and most obvious part about the live show is the jumping, climbing lead singer of At the Drive-In, Cedric Bixler-Zavala, who was super energized. Some of his statements showed his sense of humor:  ”Sometimes at home, I listen to Abba, and I’m not ashamed of it…” and his echoing of the words from Van Halen’s “Hot for Teacher”: “I’ve got my pencil.” Despite Bixler-Zavala’s demeanor between songs being varied between funny and calm, the fury of the songs was uncompromising because of Omar Rodriguez-Lopez’s unrelenting guitar work. The music sounded very much like their records: aggressively intense. They were a great band to end the festival, with their energized vibe. 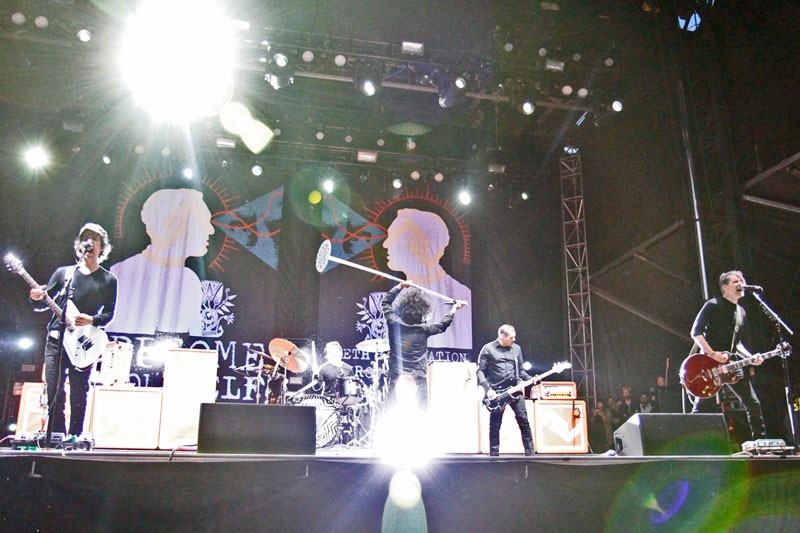