The Queens of the Stone Age headlined a rocking Cinco de Mayo at Shaky Knees.... 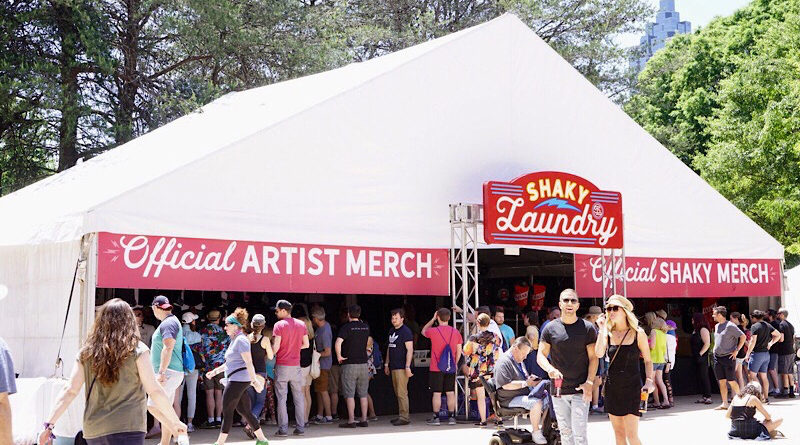 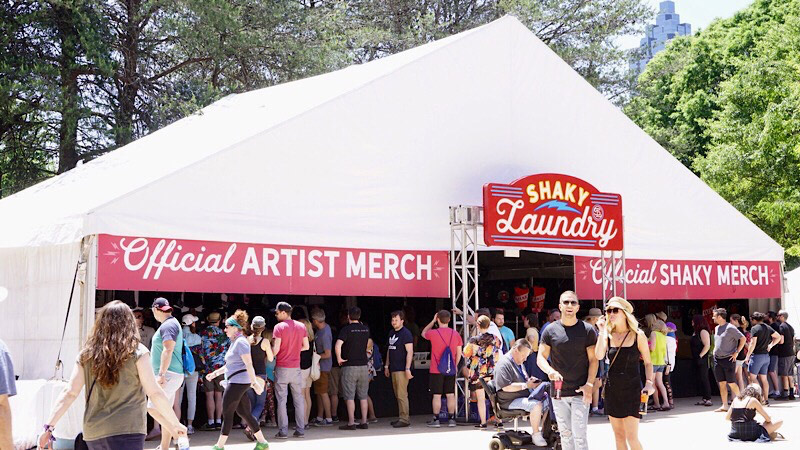 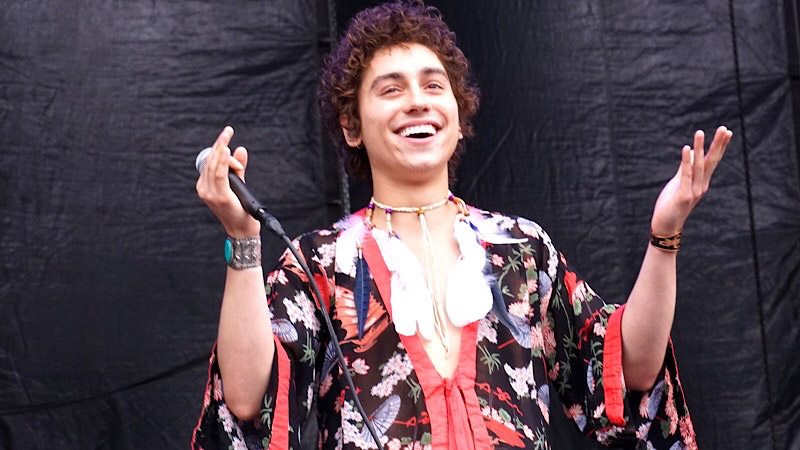 The three-brother Greta Van Fleet was highly heralded, and their act was very much on fire. Their powerful, old school blues rock had all the side dishes included – a charismatic, wailing singer, a gifted guitarist with a flair for also staying in the spotlight, a musical wunderkind bassist who also played the Hammond keyboards, and a skilled drummer who helped drive their pounding, driving rhythms. There was so much happening on stage, it became difficult to keep up. Singer Josh Kiszka showed diverse influences with his poses and gestures, including Marc Bolan of T. Rex, and, at this show, hand gestures were definitely those mostly used by Robert Plant. Guitarist Jake Kiszka drew upon many styles from obvious Rock and Roll Hall of Fame members, but his skills also drew from something older and darker, like John Lee Hooker, so it was fun but slightly unsettling to watch him play. Sam Kiszka’s mentioned influences were broad, when speaking after the show. The band liked long endings for their songs, again taking it back to the 1960s and ‘70s. 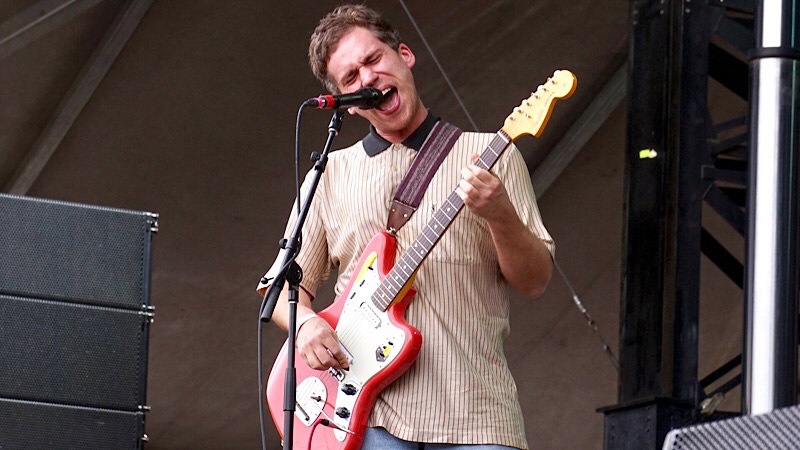 Andrew aka A. Savage kicked Parquet Courts right into the set, singing and playing guitar on “Total Football”, and then meandered into “Dust”, which was appropriate for the dusty nature of the Piedmont Stage location. By song three, “Stop Sign”, a small pit started behind the front couple of rows, where everyone was jumping and dancing. Their song style was classy, tight, energetic punk kind of like The Minutemen. There was little talk between songs, but A. Savage talked about it being Cinco de Mayo and also mentioned that day’s Kentucky Derby. They covered a lot of ground, playing 15 songs in about 50 minutes, comparable to Friday’s Jimmy Eat World set. Max Savage, the drummer, enjoyed playing “Freebird 2”. Sean Yeaton, the bassist, added a unique and unusual touch, shaking his head and cheeks side to side with his mouth open. Austin Brown, co-lead singer, guitarist and keyboardist, also developed his own touch, playing the keyboard with the head of his guitar – now that’s original. The band will do what it takes to make the sound they need, including playing a Suzuki Omnichord at one point. Their set closed with “One Man No City” and “Light Up Gold”. 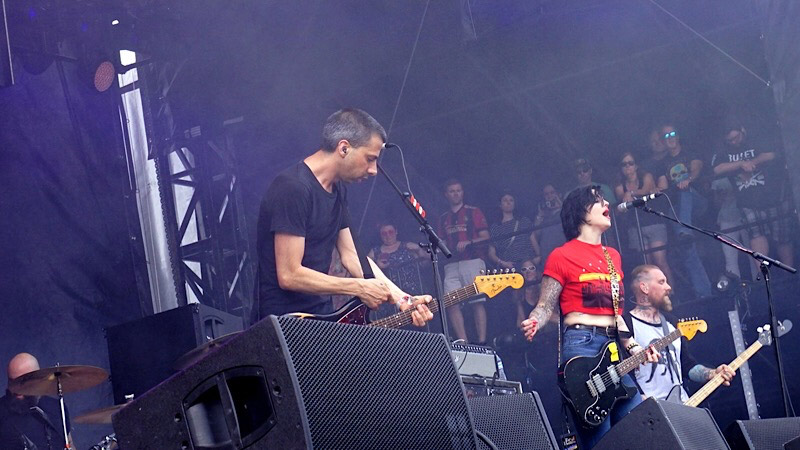 There was a lot of applause when Australian born Brody Dalle took the stage with the “new” iteration of The Distillers. The opener “Drain the Blood” was strangely calm, but the pace accelerated quickly. By the time “I Am a Revenant” began, the band had hit break-neck pace and peeled off song after song, complimenting Dalle’s vicious growl. She was able to capture the sound of the record and deliver it live with a few embellishments. Her guttural roars roused those at the show and perhaps anyone nearby. 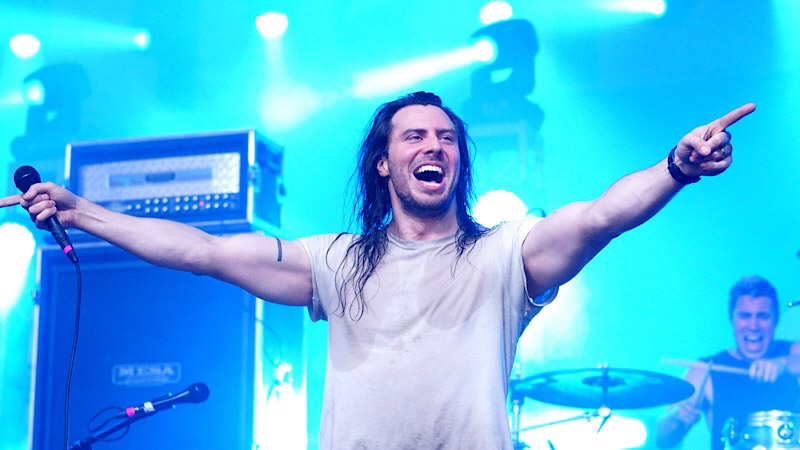 After bandmates presented themselves individually, Andrew W.K. came out and soon joined the noisy ruckus with his high-energy singing, inciting the crowd into a mosh frenzy. He raised his arms in the air and held his hand out like an expressive, pleading evangelical preacher. The party time, anthem-based metal was spot-on as heavy as ever. Bassist Gregg Roberts’ intense bass playing accentuated the show with funny smiles and facial gestures, and in a different band, he could be the center of attention. But in this band, when it’s time to party, they will always party hard! About halfway through the set, A.W.K. brought out his taco guitar, which drew laughter from the rather intense audience.  It seems it would be difficult to find a band with as much energy as A.W.K. but he definitely succeeded, with three guitarists (Erik Payne, Amanda Lepre and Dave Pino), a second keyboard player (A.W.K. played them also), and that wonderful bassist. Drummer Clark Danger actually joined the band after submitting an audition on YouTube. Andrew W.K. seems to be the most committed man in show business – in fact, with that performance, he looked like he may have once been committed! 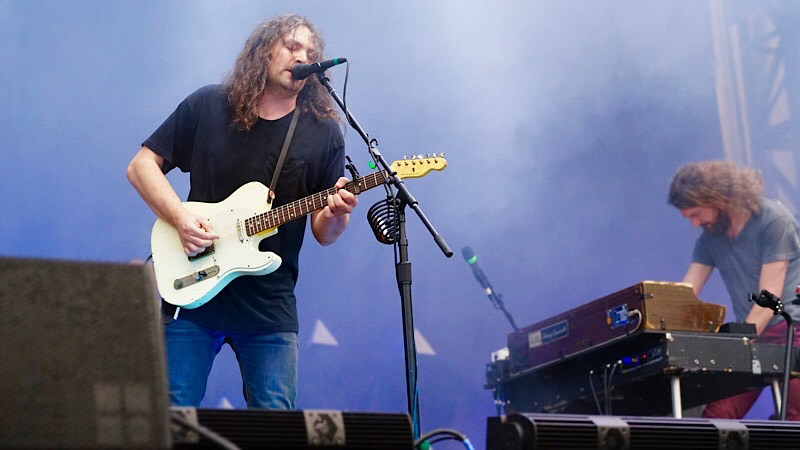 A short rain delay cooled off the audience, then Grammy winners The War On Drugs came on stage, ready to play to a marijuana-scented, chill crowd. Singer-guitarist Adam Granduciel began the calm, even-keeled performance with tightly woven guitar and keyboard rhythms that spun a spacious sound that captivated the crowd. Granduciel was clearly the bandleader and shifted the overall mood with his guitar solos while playing “An Ocean in Between the Waves” and “Nothing to Find”. It was overall a soothing set, but like Dylan or Springsteen, it challenged the audience. 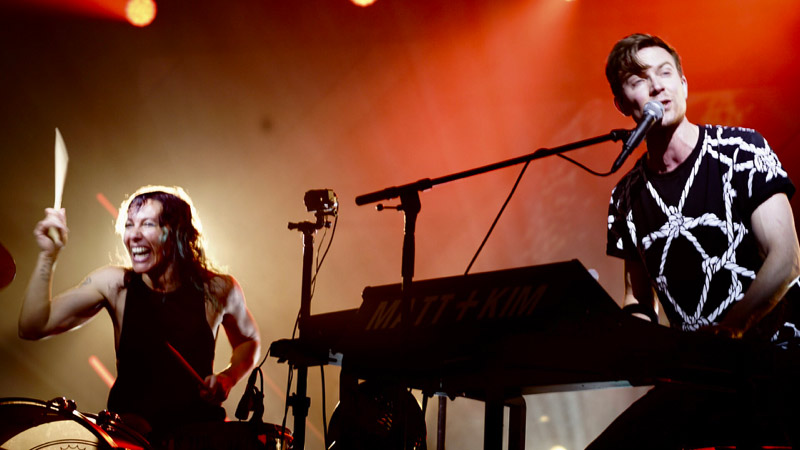 For years, stories of Matt & Kim circulated, and every story sounded larger than life, with everyone raving about their exhilarating performances. Upon arrival, before the show even started, the audience was full of people that were happy, smiling, waiting to give high fives and hugs to whoever passed their way. Matt Johnson and Kim Schifino literally ran on stage, and receiving a gracious welcome. Schifino pummeled her drum kit, then a few seconds later, she was standing on her bass drum, reaching down to play the snare. Johnson wore a broad, Cheshire Cat smile, beaming at the audience as he hit the sequencer with one hand and played keyboards with another. At one point, “Simon Says” was said, but with the kinetic movement and energy of the band and the crowd, it seemed like a fuzzy memory. The first of many crowd surfers was a young woman. Between songs, Kim was quick to point this out. She said, “Pussy rules. The sooner you guys learn that, the more you’ll get”. Johnson commented, “We play like Kim likes sex – loud, hard and fast.” 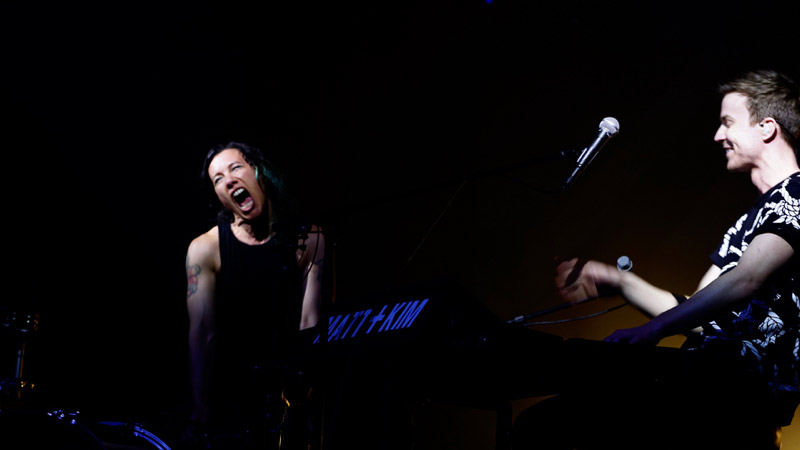 The music truly involved rapid-fire playing and fast-paced singing, creating a dance party. The gleeful performance on stage had roused the crowd with an indescribable exuberance. There were bold wails of cheering, many joyous fist pumps to the sky, random jumping, and beers soared into the air and rained down, all with playful delight. Then Schifino just jumped over her drum set! Johnson remarked that it was the one-year mark from Schifino’s knee surgery from a horrible injury onstage – she’s clearly recovered 100%. It was thought that the energy had found an apex, but Johnson started dropping samples like DMX’s “Partyup”, “Thunderstruck” and “Jump”, and that hooked almost every last person in the area like a tractor beam from some science fiction movie. 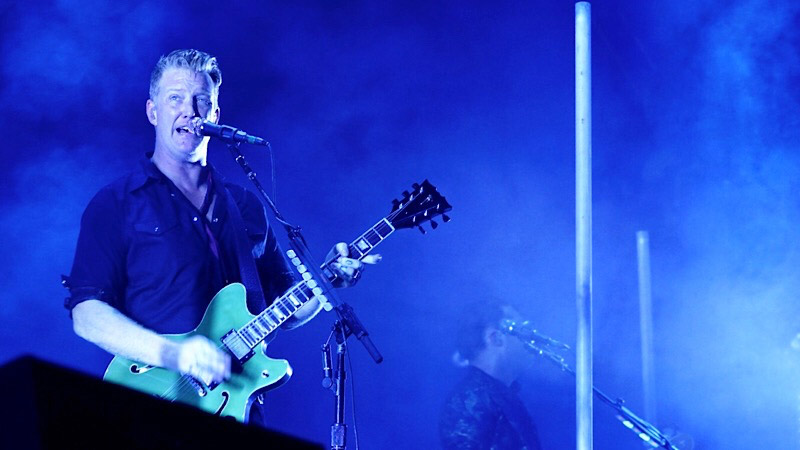 The Queens of the Stone Age started right into rocking with “If I Had a Tail” and “In My Head”. Then singer-guitarist Josh Homme encouraged the crowd to get loose with him as the band riffed through a few guitar solos. There were two other guitarists playing in the band, Troy Van Leeuwen and Dean Fertita, Michael Shuman played bass guitar, and Fertita played keyboards as well. Drummer Jon Theodore was featured in a long drum solo. Later in the set, Homme spoke up, saying, “What I like about these festivals is we can all watch bands, we can all get shitfaced, and everyone has a good time.” Other songs played included “No One Knows”, “Burn the Witch”, “Little Sister” and “Go with the Flow”. During the set, the band kicked and hooked their legs around the many flexible LED light poles planted on the stage.

The Sea and Cake – Any Day