The Squirrel Nut Zippers brought the spirit of Christmas (and fun) to Atlanta.... 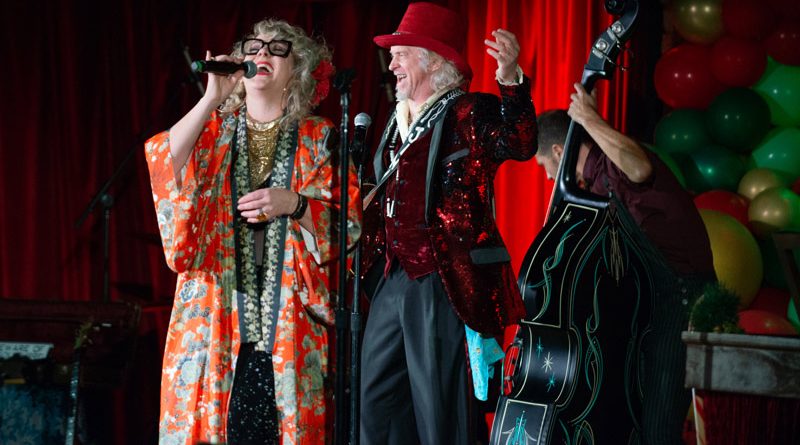 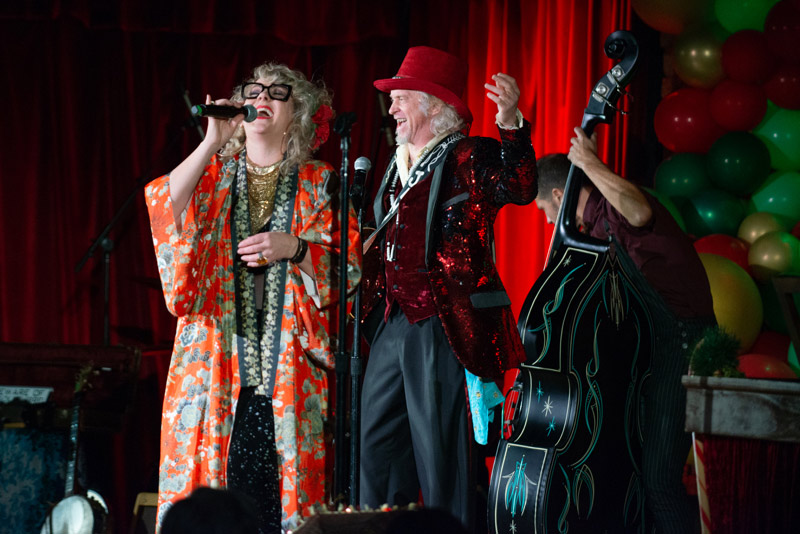 The Squirrel Nut Zippers brought the spirit of Christmas (and fun) to Atlanta on Sunday night, December 15th, and left the audience dreaming of a white Christmas in the Deep South. 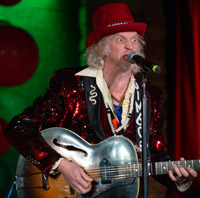 For their last performance before the holiday, frontman Jimbo Mathus led his band of merry men (and one very talented woman) in a jolly performance that lit up the intimate City Winery venue with the perfect mix of ‘30s era swing, delta blues, bluegrass and gypsy jazz.

The crowd was a mix of true fans and office Christmas party revelers, which actually included “Santa” among them. At first, this made for a polite, albeit sedate crowd, but the Zippers wasted no time in winning everyone over, as they helped them discover their own, inner elves. 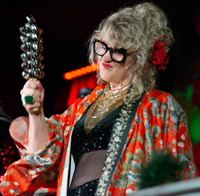 Beginning with a comical version of the Charlie Brown classic: “Christmas Time is Here”, they quickly moved into a jazzy rendition of “White Christmas” and then on to their sassy hit, “Put a Lid on It”.

The group was attired in a festive mix, including Mathus, resplendent in a red sequined top coat and top hat, Cello Blue, vocalist, with a burlesque lingerie ensemble with a stunning red kimono, and Dr. Sick, fiddler and vocalist, in the ugliest of Christmas sweaters and a black, stovepipe hat to complete the look. The whole group exuded an over-the-top, hip holiday vibe. 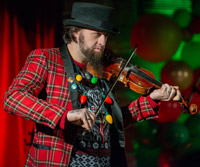 The band moved on to the haunting “Blue Angel”, with a gorgeous violin solo by “Sick”, then a decidedly “county” take on instrumental, “Bedlam Ballroom”. Trombone player Eddie King then took the lead on “I’ve Got My Own Thing Now”, which rocked with strong guitar licks by the multitalented Dr. Sick. He then sang the popular “The Suits are Picking Up the Bill”, accompanied by the ever-present, precision drumming of Nelson Bernard III, and by Sick himself, on the fiddle.

The show then rode the Yuletide back into the beautiful, “It Ain’t You”, where Cello Blue’s lovely voice was showcased to perfection, complemented by a stylish costume change into a red and green plaid pantsuit straight from the 1970s McCall’s pattern book. Sax player Henry Westmorland then joined Blue for a jaunty duet of “I Love the Winter Weather”. 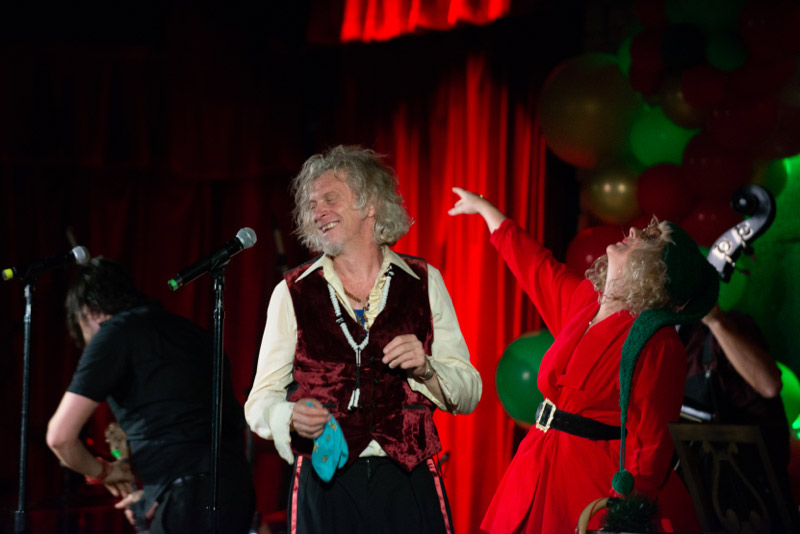 Trumpeter, Dave Boswell took his vocal turn as he crooned “My Evergreen” (accompanied by pianist, Leslie Martin and an eerie solo on the “Saw”, by Dr. Sick) as Blue left and returned with yet another costume change. She then emerged in full elf attire with a green stocking cap and a red jumper, as the whole band dove into the Zipper’s biggest hit, “Afterlife”, with gusto, like so many swashbuckling pirates, kicking up their heels and encouraging the crowd to do the same.

As the crowd was whipped up to something as close to a frenzy as is possible on a Sunday night in a wine bar in Atlanta, they brought it home with “The Ghost of Steven Foster”.

For a much-encouraged encore, the Zippers, led by the ever-charismatic Jimbo, made their way through the audience, instruments (and a parasols) in hand, for a “Second Line” Christmas parade around the venue as they sang “I Believe in Santa Claus” to the now-adoring fans.

It may have not been a snowy (or even cold) night in Atlanta, but you’d never have known it as the festivities unfolded and the happy crowd exited into the far-from-silent night. 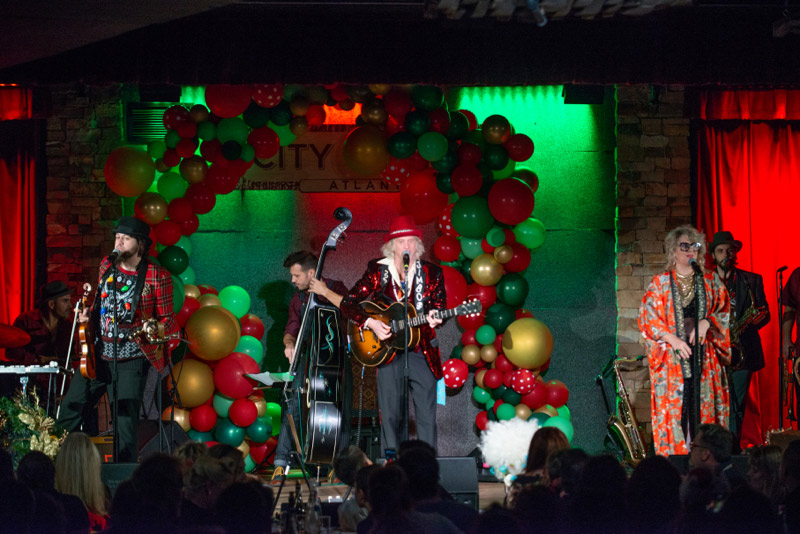 Set List:
1. Christmas Time is Here
2. White Christmas
3. Put a Lid on It
4. Blue Angel
5. Bedlam Ballroom (instrumental)
6. Christmas in Carolina
7. I’ve Got My Own Thing Now
8. It Ain’t You
9. The Suits are Picking Up the Bill
10. I Love the Winter Weather
11. My Evergreen
12. Afterlife
13. Ghost of Steven Foster
14. I’m Coming Home for Christmas (country) original from Christmas album

Encore:
15. I Believe in Santa Claus 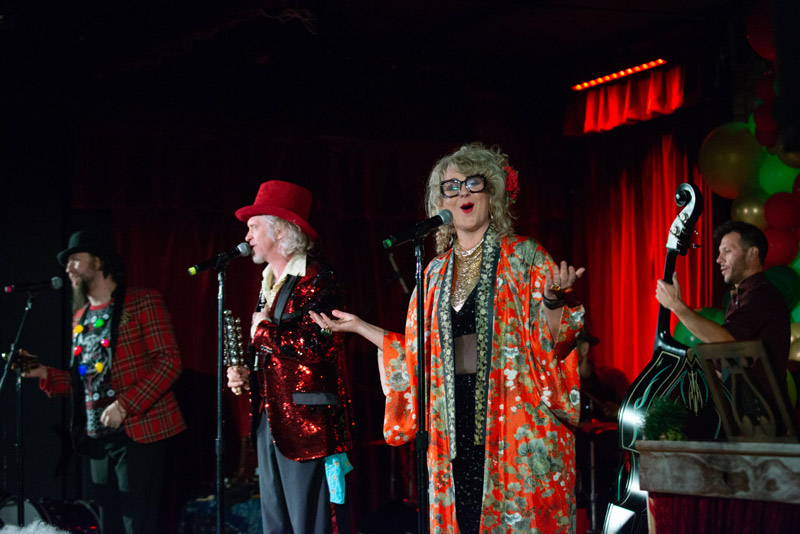