SXSW 2014 began in full with a full Wednesday that was capped by tragedy.... 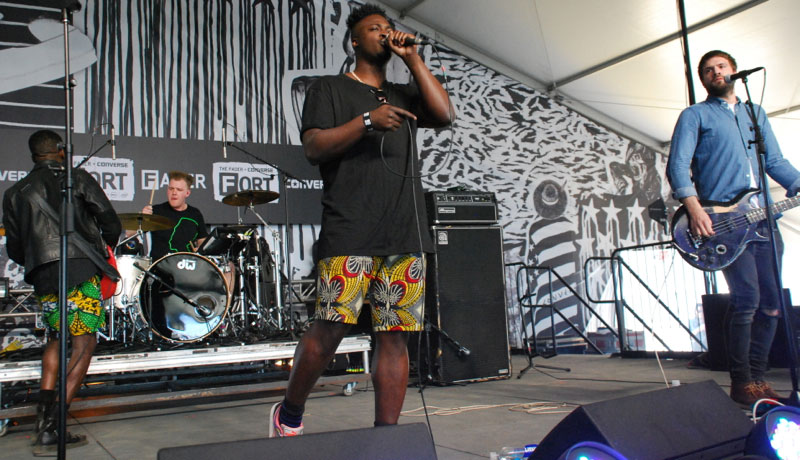 Wednesday is the traditional start to SXSW, including for the multi-day events like FADER Fort.  Despite being a regular event at the festival, it’s still an impressive one, from the acts to the free drinks to imported turf. 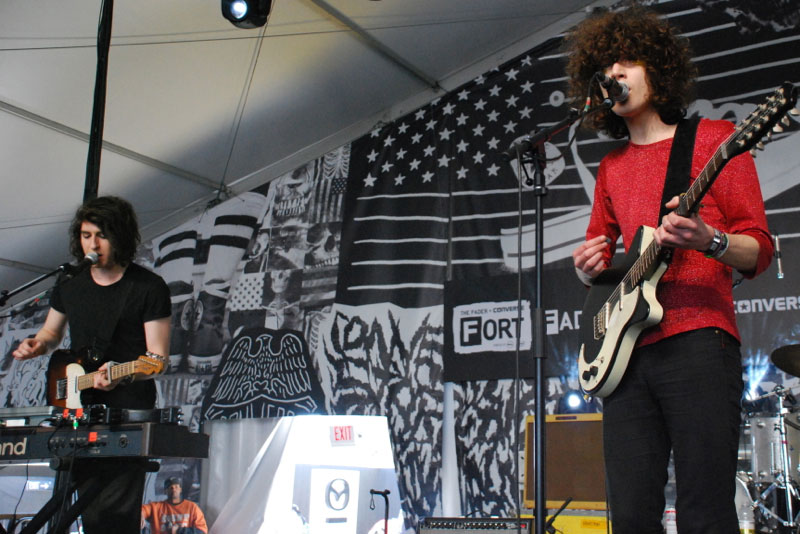 A band that’s been getting a lot of attention, both good & bad, has been Temples.  While only stuck around for a bit, they did seem kind of psych-lite (admittedly in the light probably not ideal for them). 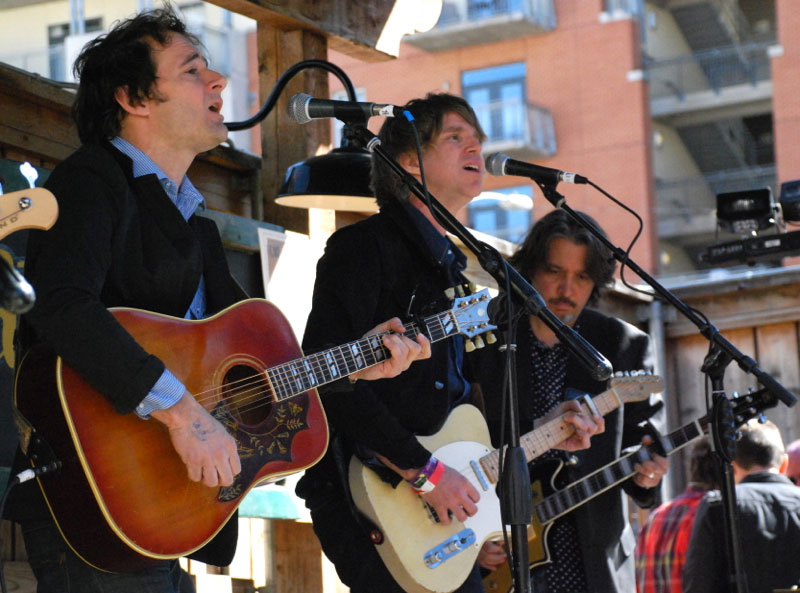 Raced over to the west side of Congress for a great day showcase being thrown by a longtime ‘Friend of the Q’, Toolshed, Inc. – only to find Ginger Man at capacity.  Luckily still made it in for The Autumn Defense, who are touring behind their new Fifth (QRO review), and the wait was well worth it, for one of the sweetest sets of SXSW.  It was kind of a perfect vibe for the soft and relaxed band, nice and sunny, older crowd able to sit – just out-and-out good. 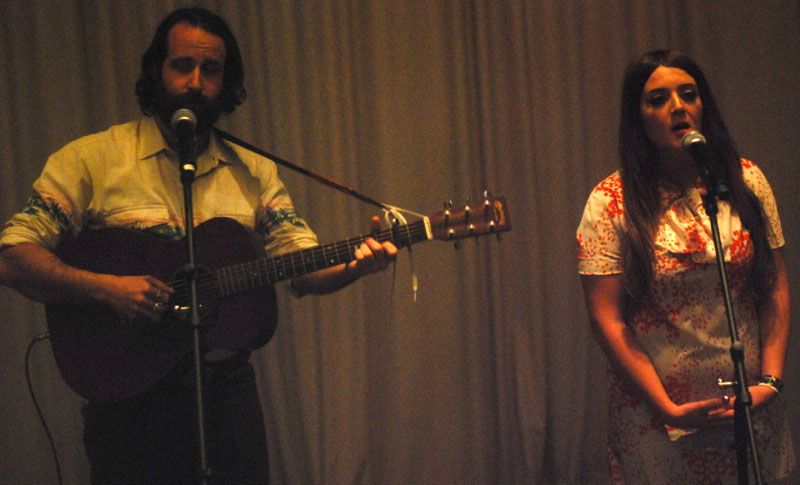 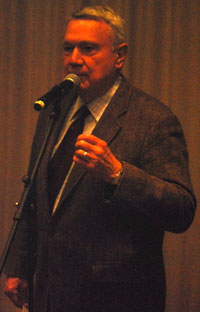 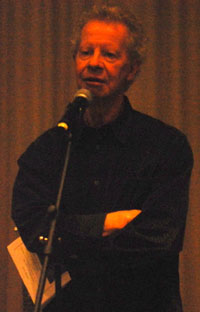 There was a special Music Media Welcome reception at W Hotel; it would have been nicer on the roof like originally planned (moved due to weather worries on a very windy day in Austin), but still free food, free drinks, and a chance to sit down.  Also had short speeches by two local luminaries, Mayor Lee Leffingwell (who joked about Austin being the “Windy City” this day) and head of Austin City Limits (QRO Music on Late Night TV), Terry Lickona.  Plus a set from Jazz Mills & Corey Baum, who joked that they got to play a SXSW show with actually good sound.

Oh, and nice gift bag upon leaving, even if you had to carry it with you the rest of the day…

Seattle indie radio station KEXP always comes to SXSW, and this year had Rhett Miller and Black Lips, who were at SXSW behind their new Underneath the Rainbow. 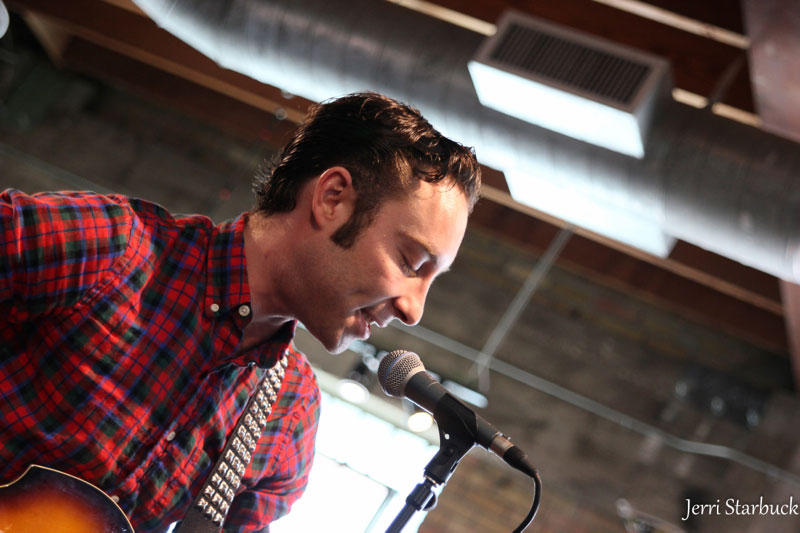 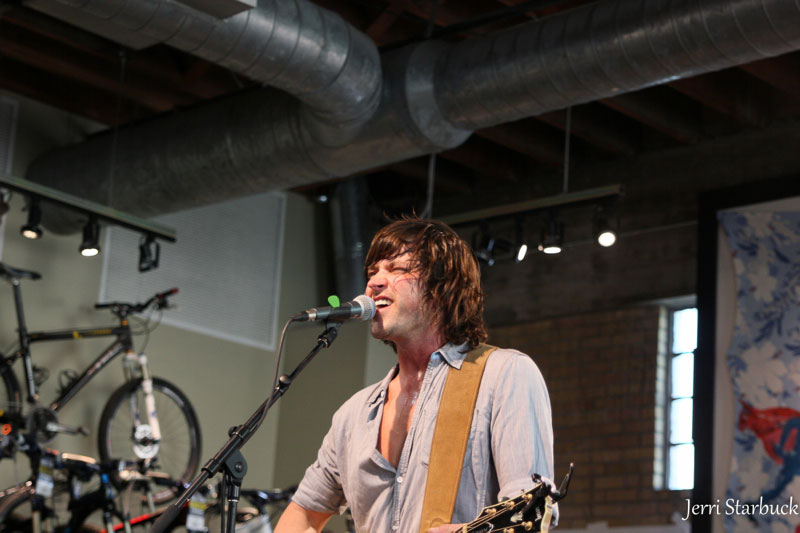 Samsung Galaxy brought big acts in the evening (who you couldn’t get in to see), but their stage was also open during the day for new artists like The Suffers and Juliette Ashby. 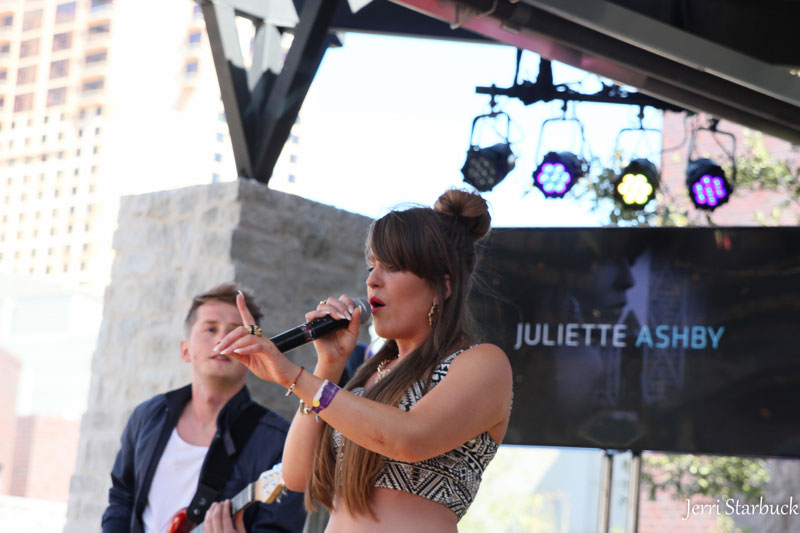 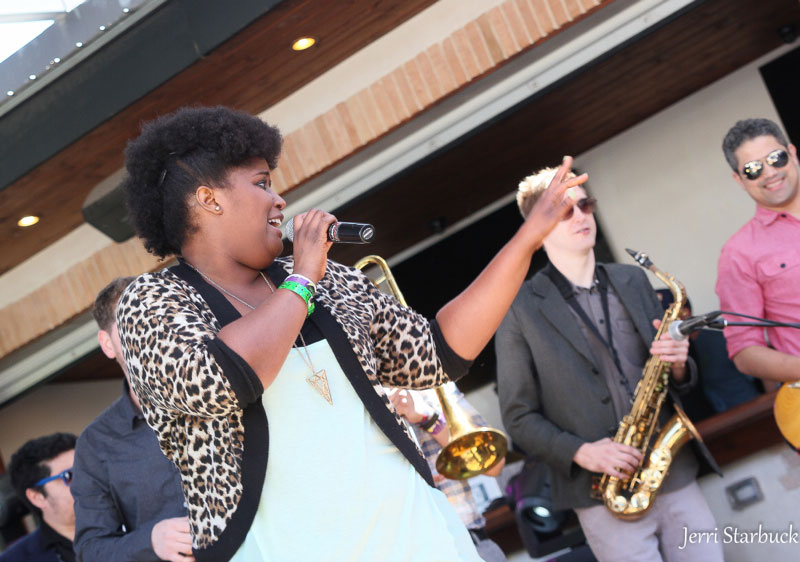 The Brits took over Latitude 30 like usual for all of SXSW, bringing over buzzed-about acts like The Wytches and Save Your Breath. 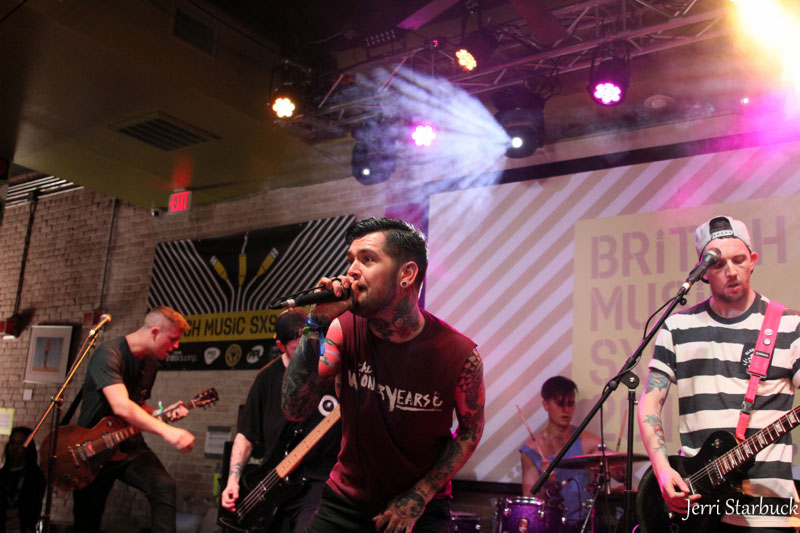 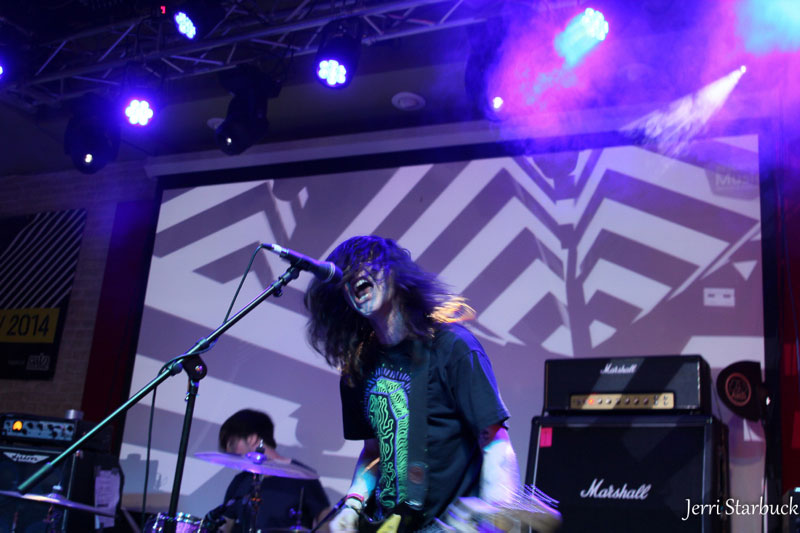 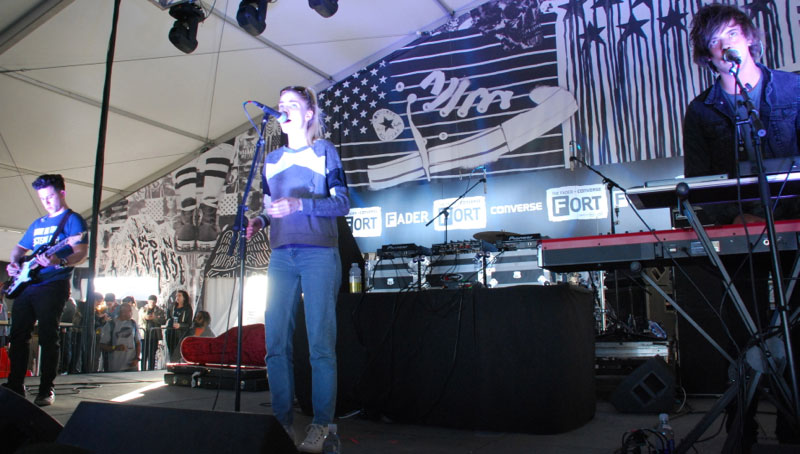 Long walk back east meant only caught the tail end of another highly hyped British act, London Grammar.  And spent time after set seeing what to keep and what to chuck from Music Media Welcome reception gift bag. 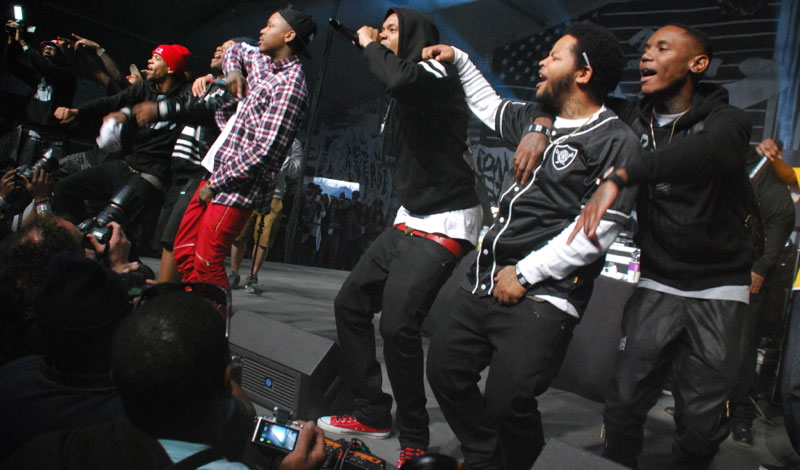 The big event at the first day of FADER Fort was West Coast hip-hop collective YG.  It wasn’t quite the mania of Odd Future there a few years ago (QRO recap), but instead just a great mania – and one could make it into the photo pit with them…

That especially mattered when, later in their set, they brought on the one & only Snoop Dogg!  Fans and photogs rushed back towards the stage (your correspondent literally had to finish his burger in the pit…) for Snoop to throw down some rhymes – and not only smoke a joint on stage (this is Snoop, after all), but even pass it to a fan up front (and over the heads of the photographers).  He didn’t try to dominate the set, and moved into the back and then off the stage low-key, to let YG close it out all at the lip of the stage. 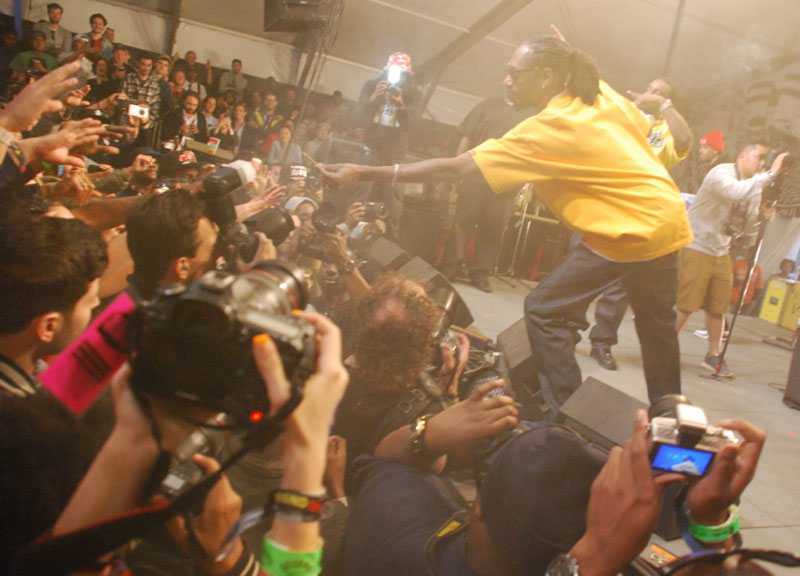 Bar at FADER Fort can close early & abruptly, and did after YG (your correspondent was literally the next person in line…), so many likely didn’t stick around there for Little Dragon.

Church on Monday with Ray Benson 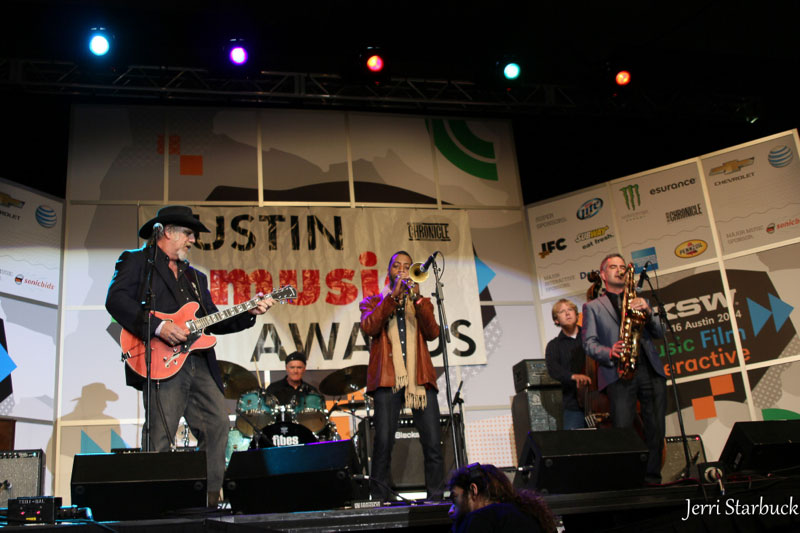 The longest-running event at SXSW is the Austin Music Awards, where locals get together celebrate some of their best.  Not lost in all the acceptance speeches was the evening’s true entertainment: Asleep at the Wheel’s Ray Benson‘s cruising through “(Get Your Kicks On) Route 66” with cooking combo Church of Monday and centerpiece organist Dr. James Polk, once Ray Charles’ bandleader.  Francis Prève, meanwhile, cranked some Zeppelin. 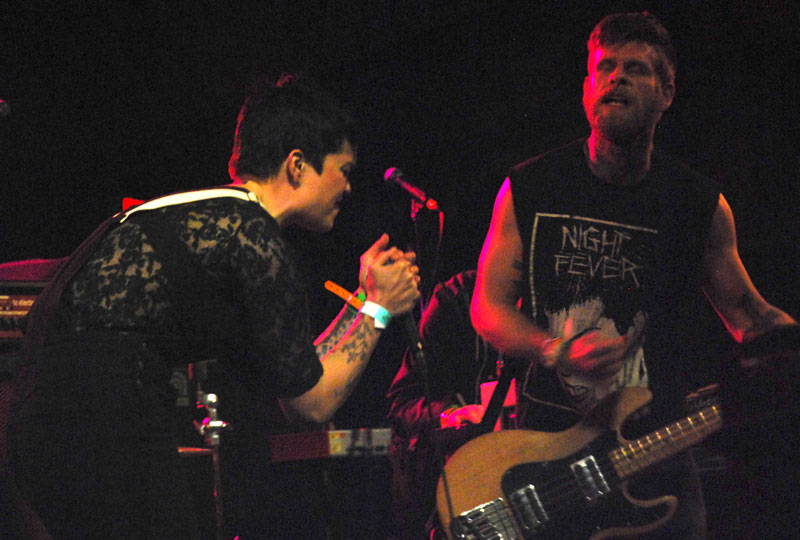 A highly hyped band from Brooklyn is Perfect Pussy, with a noise-punk that has won many (though not all) fans from the scene around the now-closed DIY 285 Kent venue.  Meredith Graves is a showwoman – just don’t try to Google images of the band based on their name… 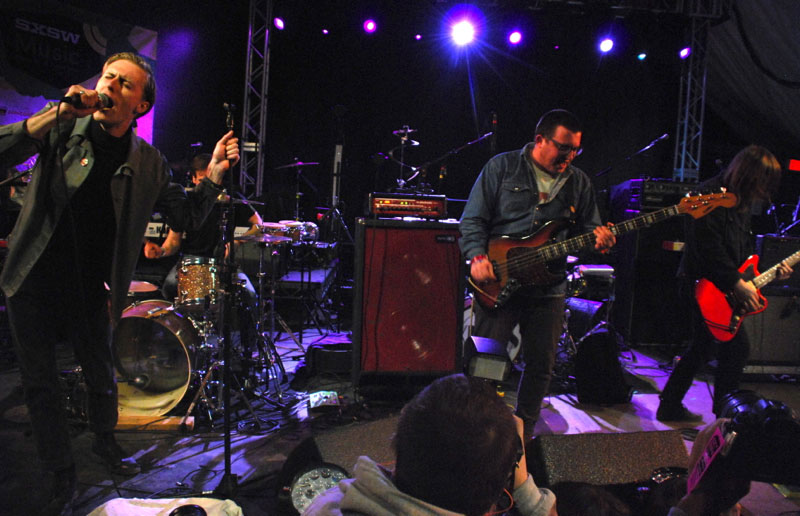 More straightforward indie-rock, but still hard-hitting, was England’s Eagulls.  Especially effective was singer George Mitchell, who used the mikestand to lean on while he jerked forward to the music, giving it yet one more push. 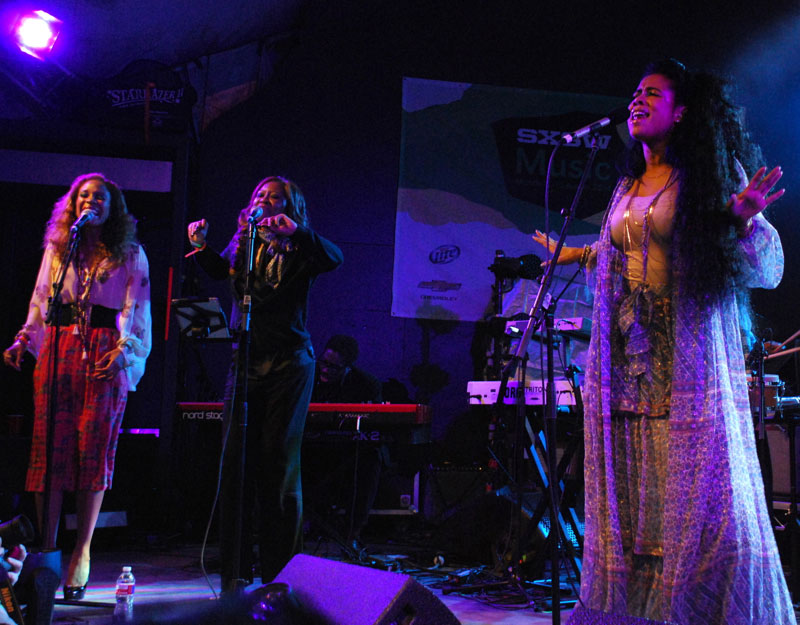 Kelis is a sweet R&B lady with a kick-ass orchestra & back-up singers.  You really don’t need anything more. 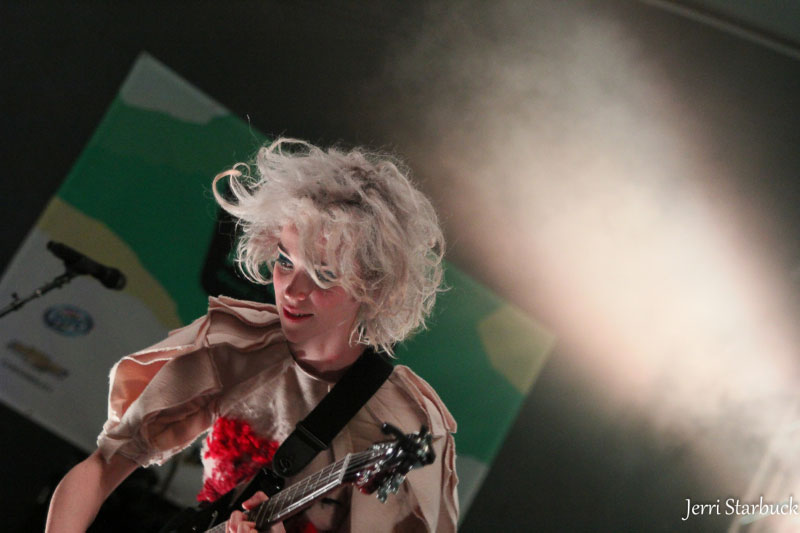 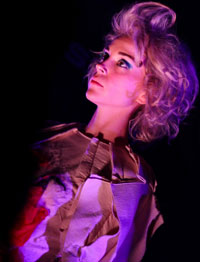 Annie Clark (QRO interview), a.k.a. St. Vincent, was playing only one show at SXSW, and of course it was awesome!  From her mannequin-like posing to open the set (which all the photographers loved…) on through, it was a masterful performance.  She also pose-walked with her guitarist, the two alternatingly shimmying forward and back on the stage, and later played from her drum-riser for all the folks farther back at Stubb’s.  Even her dyed-gray hair worked, nicely reflecting the shifting, colored lights.

St. Vincent easily could have become too big to deal with, from working with David Byrne on Love This Giant (QRO review) to signing to a major label for this year’s self-titled record (QRO review), but she’s just stayed amazing, while also finding ways to keep growing. 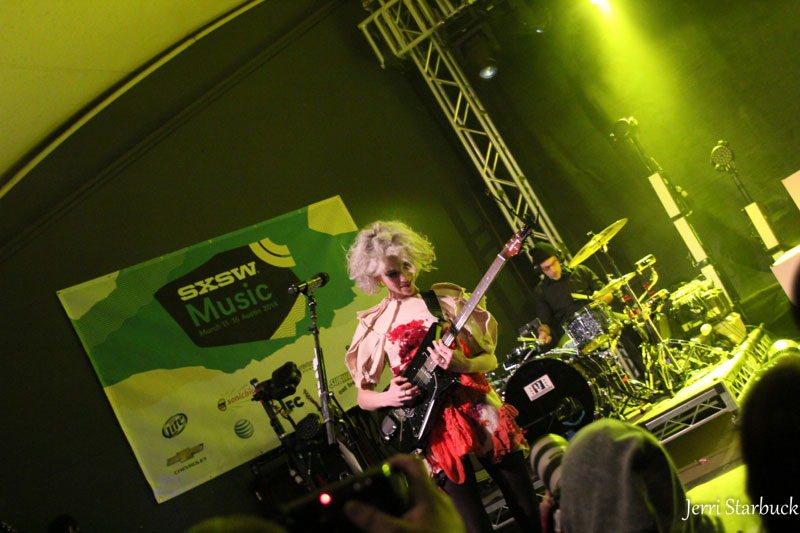 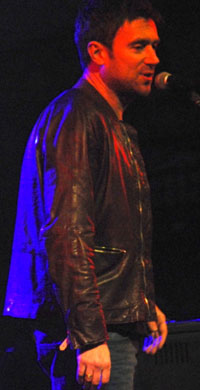 After the amazingness of Annie Clark, Damon Albarn kind of couldn’t compare.  It didn’t help that he came on late (likely due to chaos outside on Red River Street because of the car accident there – see below) – or that he limited what photographers could go into the pit, which meant QRO didn’t stay long to hear him play.  He has a new solo album out, so it’s like not you were going to hear Blur (QRO photos)… 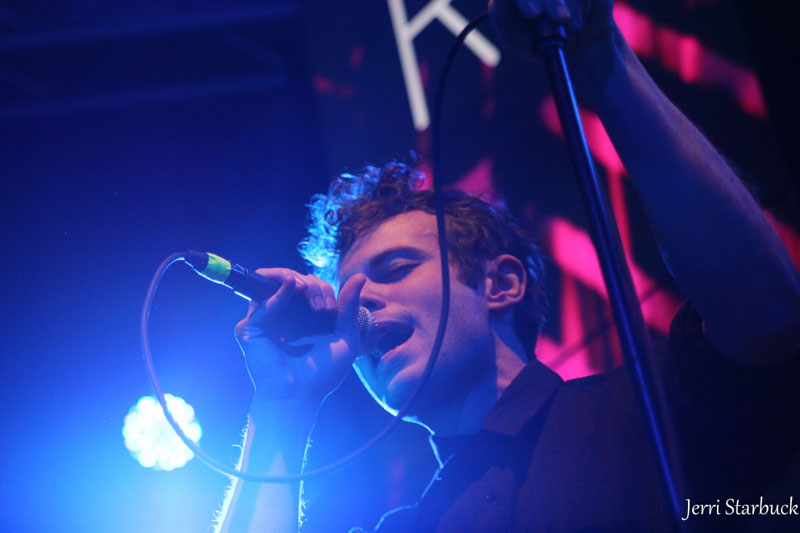 Red Bull of course brought its many-city Sound Select to Austin, taking over The Belmont all week with acts like Shy Girls.

-Anyone who has even heard of South-by-Southwest knows about the tragic car accident that occurred late on Wednesday night along Red River Street.  A driver tried to dodge a DUI checkpoint, went the wrong way on Red River, and ran into a crowd, killing four people and injuring twenty.  The worst tragedy to ever hit SXSW in its twenty-seven years, the festival could have just shut down, but instead went on (with only a few places near the site of the accident closing that night & the following afternoon), because, as Austin Police Chief Art Acevedo said, to let the actions of one man ruin the festival would be, “letting evil win.”

The victims have been identified as Jamie West, Steven Craenmehr, Sandy Le, and DeAndre Tatum, and a charity for all of those hurt in the accident has been set up at #SXSWCares.

-The Pains of Being Pure At Heart (QRO live review) @ Flamingo Cantina, 4:05 PM.  At capacity.

-Jay Z (QRO album review) & Kanye West (QRO album review) @ Austin Music Hall.  The megastar team-up, the first since their 2012 tour of joint album Watch the Throne (QRO review), was announced late and there were all sorts of hoops & lotteries to go through to get in.  Because you go to SXSW to see little-known artists like these…

-The Orwells (QRO photos the week before) and Kurt Vile (QRO live review) @ Cheer Up Charlie’s, 12:00 AM.  Couldn’t even get to shut down showcase due to accident outside.