While South-by-Southwest’s music portion officially has expanded to starting on the Tuesday, the real action still begins on hump day....

While South-by-Southwest’s music portion officially has expanded to starting on the Tuesday, the real action still begins on hump day. 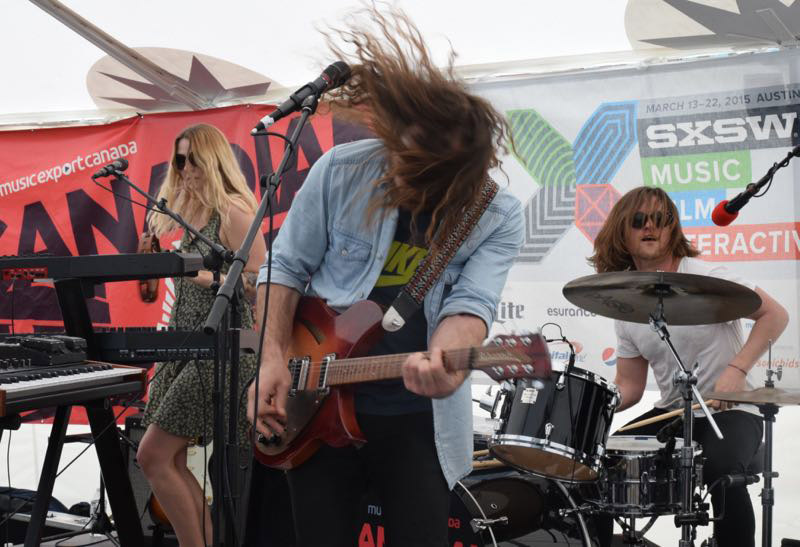 Even though SXSW takes place in the heart of Texas, there’s just not enough free food at the festival, which is why it’s nice to stop off at Brush Square Park (just across from the Convention Center) at the Canadian Blast showcase and its healthy spread. Also caught the territorially named Yukon Blonde from The Great White North, who do some fun, throwback seventies party-rock – they’re the kind of band that sings about the radio. 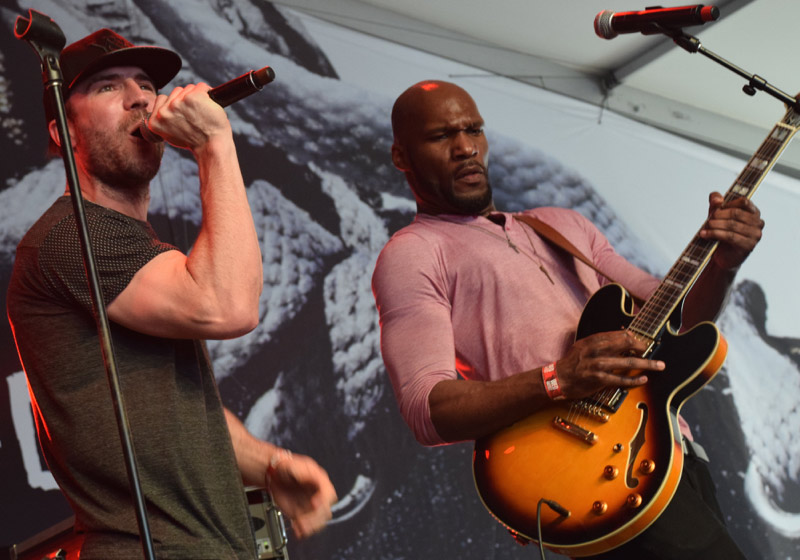 Wednesday was also when FADER Fort started in earnest. While missed the earlier acts had showed up for (see below), made it there for Sam Hunt. His music blended genres, R&B, soul, rock, even country, but felt like it never really stepped into any of them; the kind of polished music one might find on U.K.’s Pop Idol. Still, the crowd was psyched for this act from across the pond. 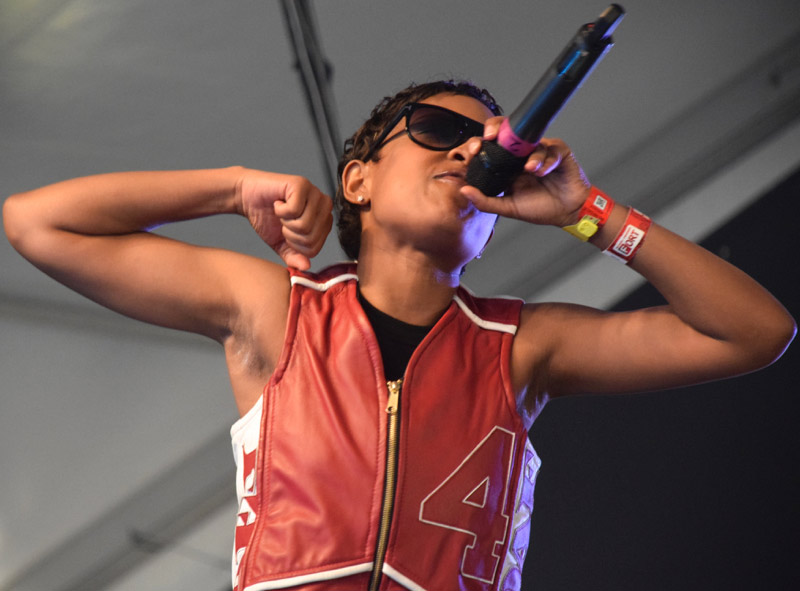 FADER Fort is always hip-hop-heavy, but particularly so this year, with artists like Dej Loaf and her guest star Trae Tha Truth. With a crowd that was very into it, as the small star with a signature jacket took the stage like she owned it.

Chance the Rapper & The Social Experiment 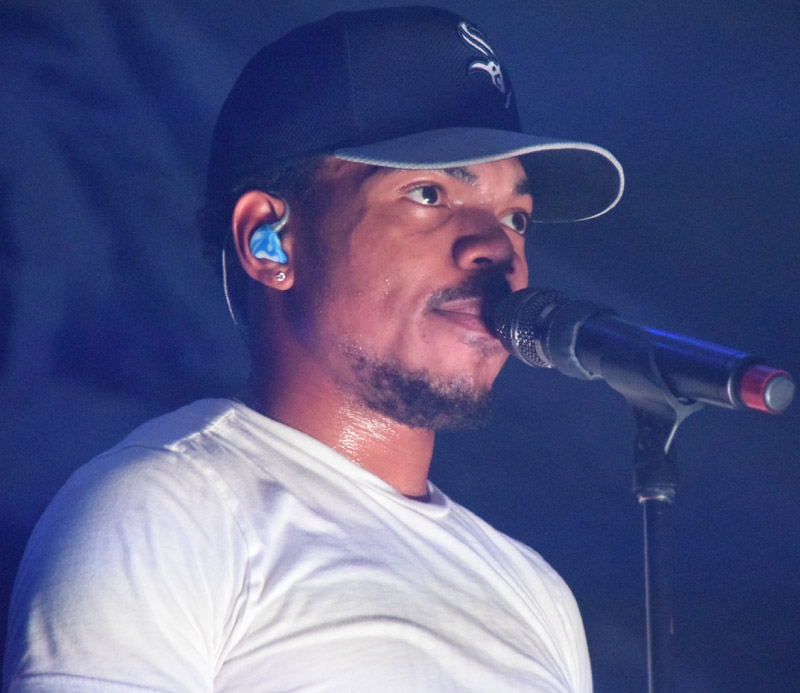 But people were definitely there for Chance the Rapper, who came to headline FADER Fort with his new band, The Social Experiment. Literally saw a girl pass out just waiting for him/them – and they did come on thirty minutes late. Yet despite that & only playing six songs, Chance & co. killed it with material young & old. It was particularly nice to see how nervously excited he was, pulling at his shirt. 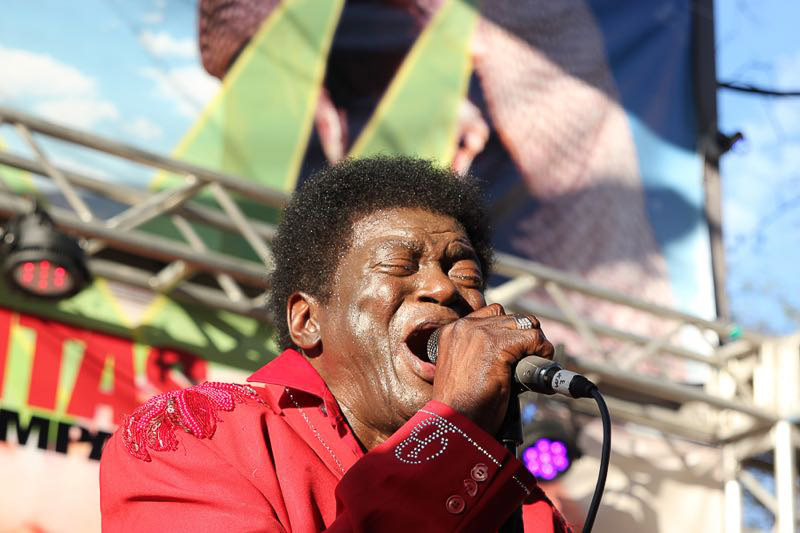 Filter Magazine always threw a great series of events down on Rainey Street at SXSW, and now that it’s morphed in Culture Collide, that tradition has continued. It teamed up with Lagunitas IPA for a party that included Charles Bradley & His Extraordinaires. 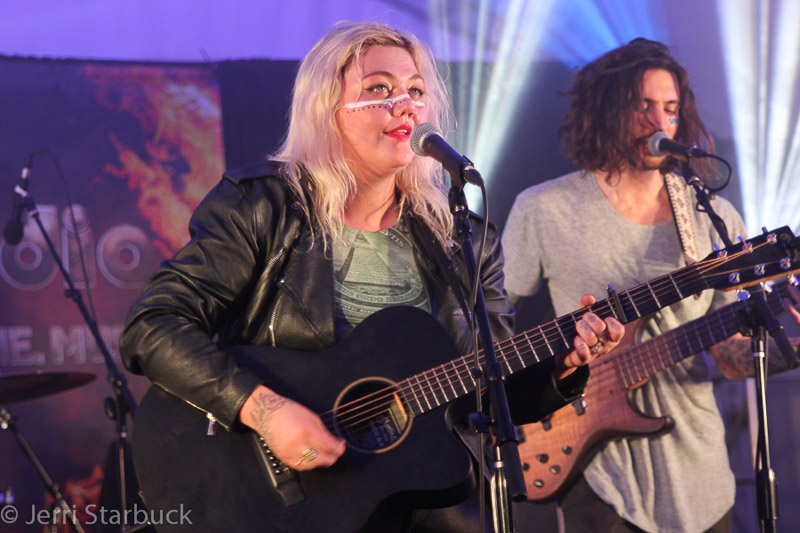 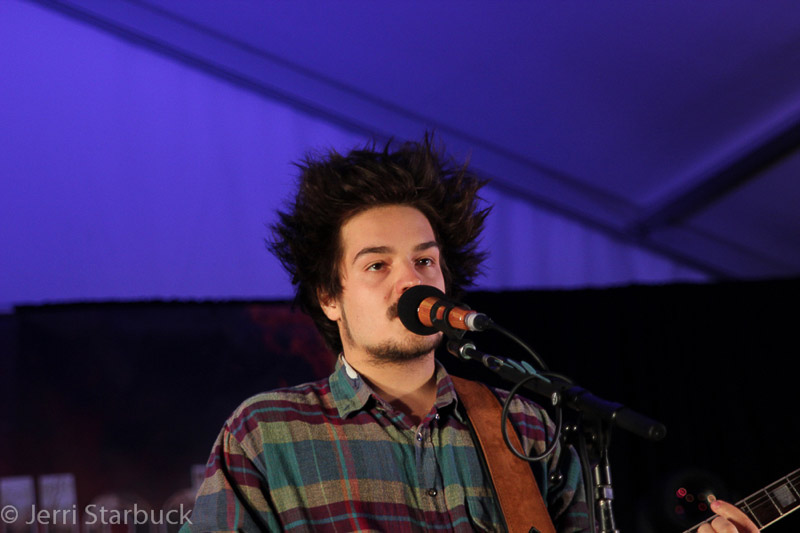 FACE, The Music of Pakistan showcase @ The Victorian Room at The Driskill 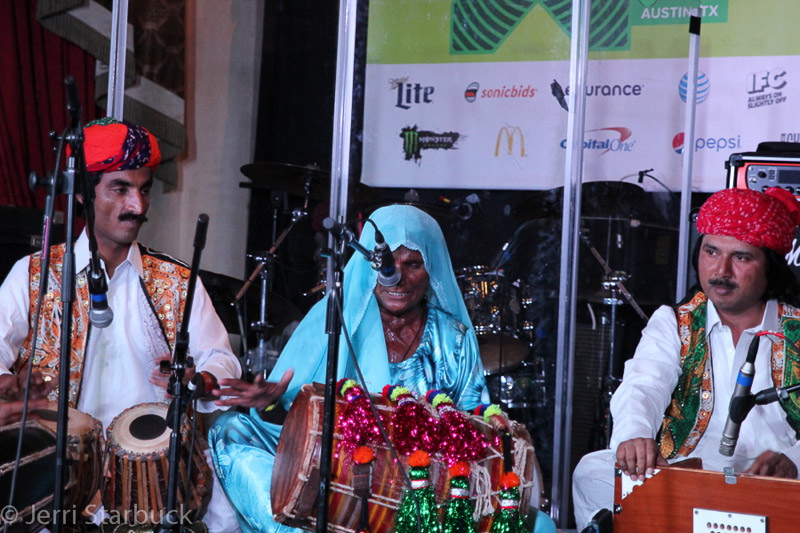 Lots of countries sponsor their musicians to come to SXSW, holding showcases to display them, but it’s usually from the richest parts of the world: Canada (see above), Europe, Japan, Taiwan, etc. But this was the first year that Pakistan, a nation most Americans only know for being where Osama Bin Laden was killed, came to Texas. The showcase from the former crown colony was held at The Victorian Room at The Driskill, and included blind octogenarian Mai Dhai.

Another great takeover of a space, alongside FADER Fort & Culture Collide on Rainey (see above) was FLOOD Magazine occupying Cedar Street Courtyard for its FLOODFest. Most people came to the small space to catch DJ Windows 98 – a.k.a. Arcade Fire (QRO live review) frontman Win Butler – but rockin’ before him was up-and-coming indie-rock outfit Speedy Ortiz: 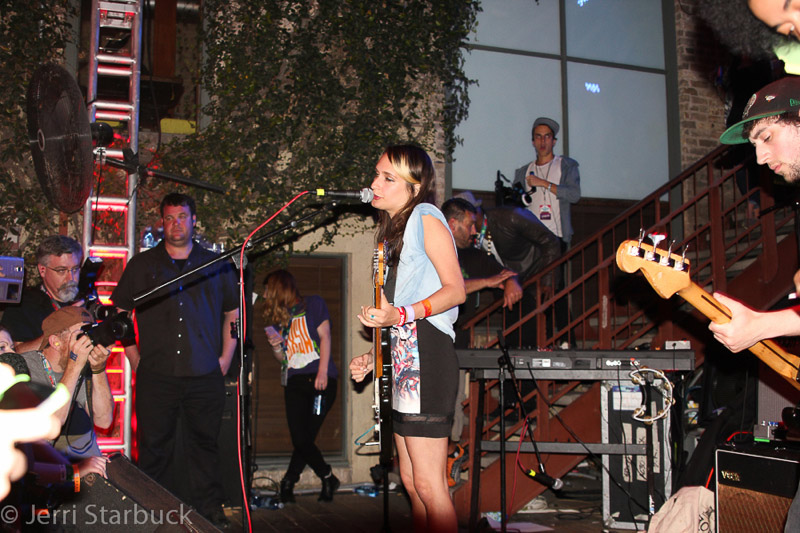 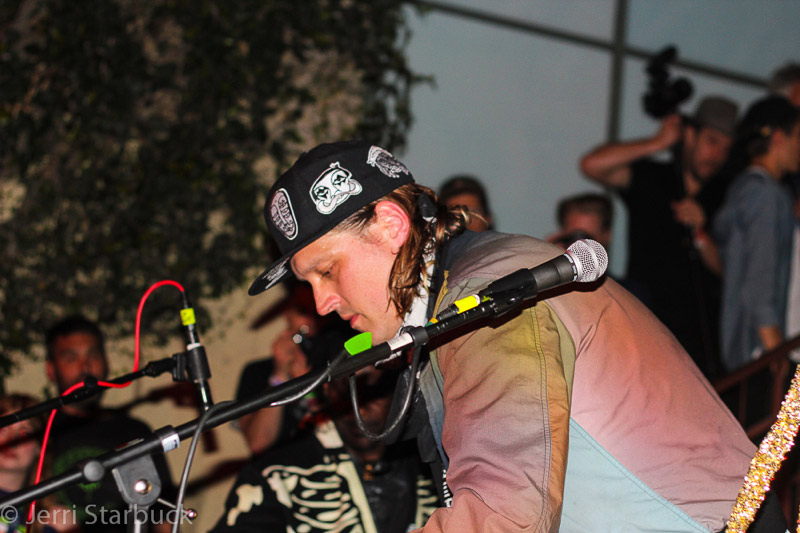 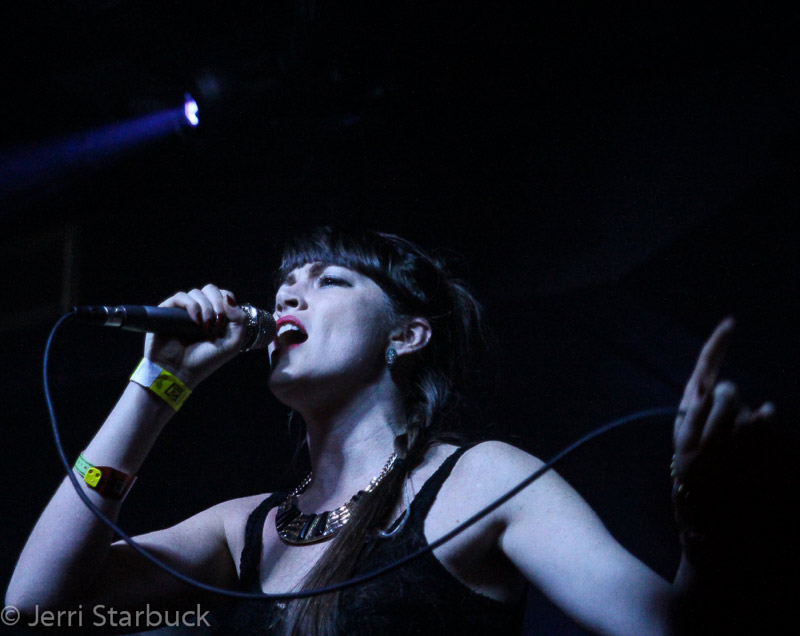 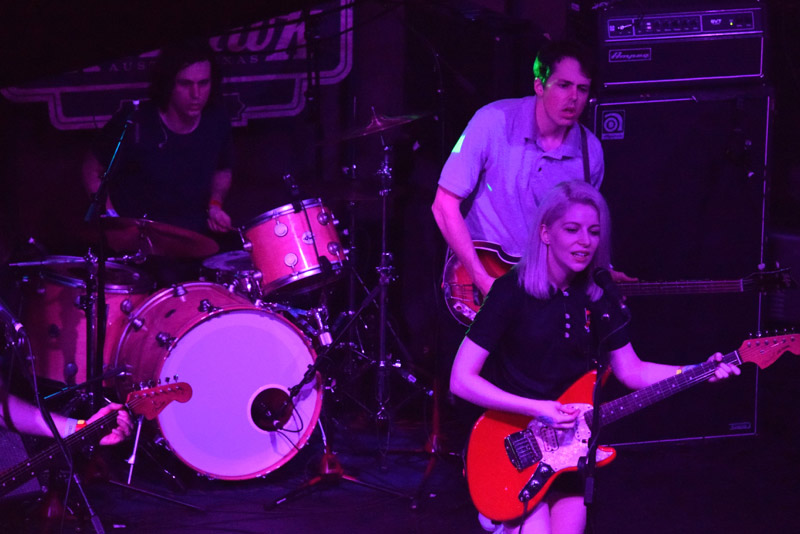 Vans shoes already knows how to do space takeovers with their House of Vans in Brooklyn (QRO venue review), and for South-by-Southwest brought it to the Mohawk. There was a massive line outside for their evening showcase (as well as ones for nearby Cheer Up Charlie’s and Empire Garage). That was interesting because the line-up was nearly all indie-rock acts that were playing many showcases at SXSW ’15 (and the drinks were only free in VIP). Alvvays are already a hit in the U.K. (QRO live review over there), nice sunny sounds, and seem to be enjoying their success (unlike, say the departed & overrated Vivian Girls – QRO photos at a SXSW). 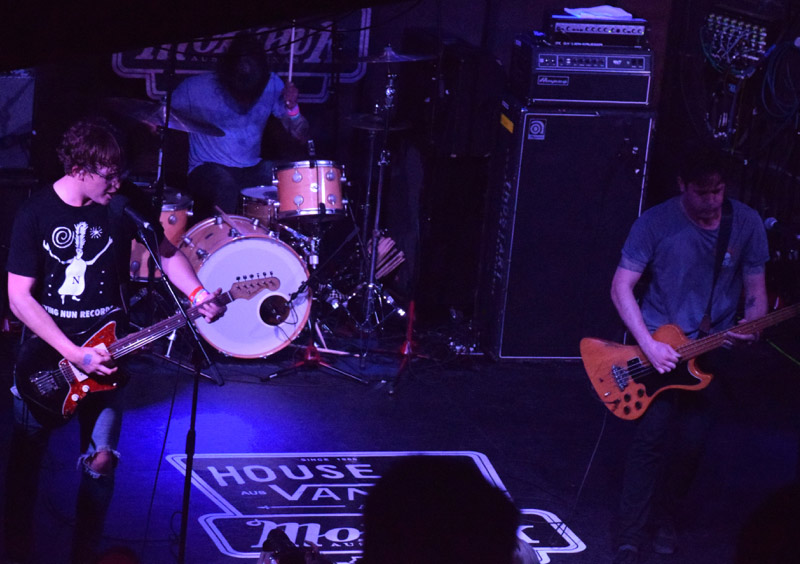 METZ thrashed it out good and proper, fitting for this showcase, including, yes, a mosh pit. 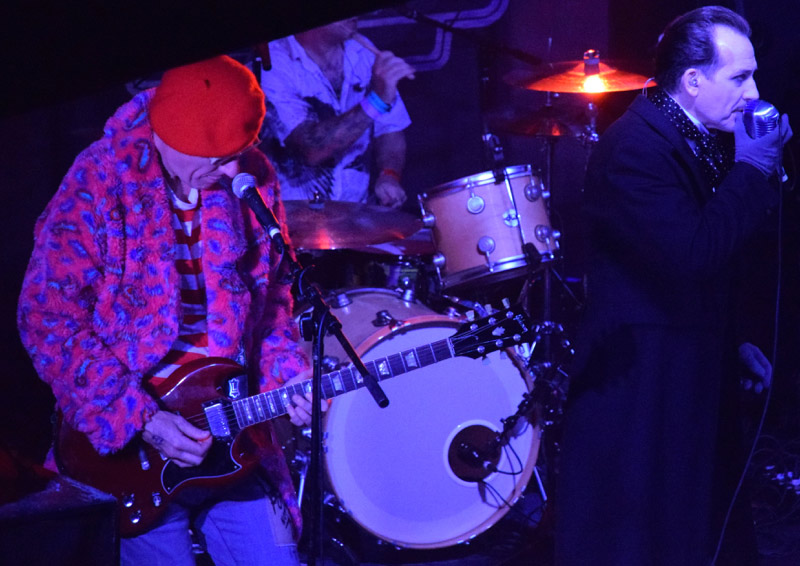 Amid all the young acts, The Damned kind of stuck out like a sore thumb. Not just for their age – they took awhile to start, thanks to bad rental equipment, even though guitarist Captain Sensible said there that punk was about not being to play well. Singer Dave Vanian only came out when they started with “Blackout”, still dressed like Bela Lugosi. 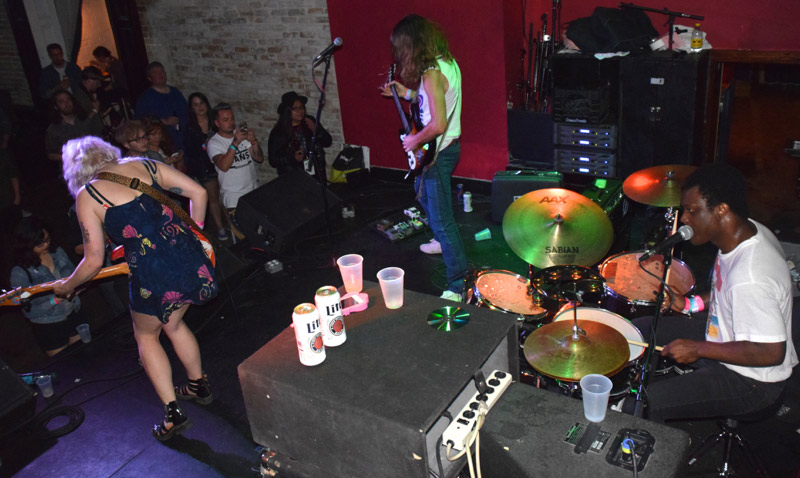 Artists also played indoors at Mohawk, a much smaller stage with a much smaller crowd, but had to catch Guantanamo Baywatch for the name if nothing else, and they brought some rock ‘n’ roll. 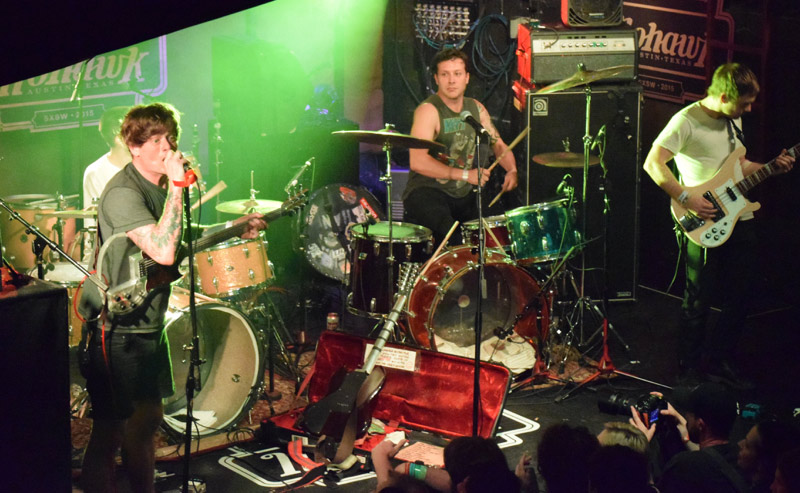 Another act very suitable for this wild showcase, Thee Oh Sees did suffer a bit from the crowd being a bit tired by this point, but didn’t let it show. 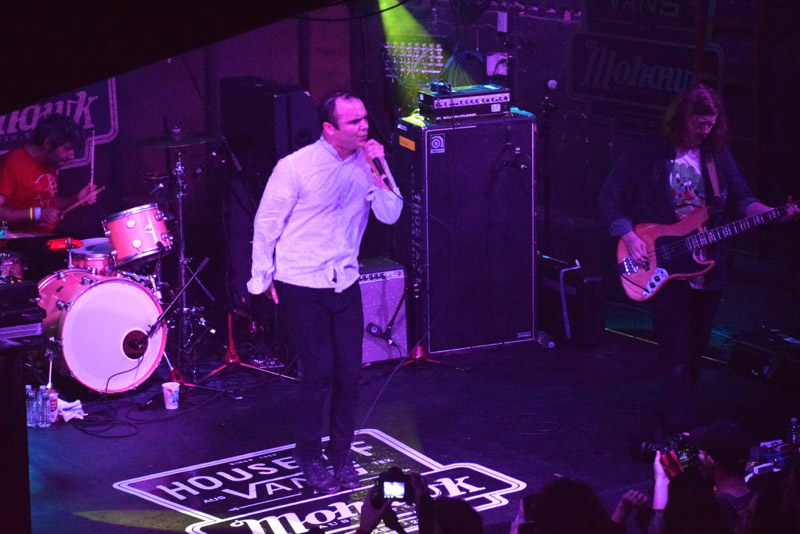 Closing out Mohawk was the synth-dance of Future Islands, who had the sexy to go with their post-punk. Even saw singer Samuel T. Herring buying his own drinks just beforehand (because, “I fucked up”) – word is they partied too hard that day to make their next show the following afternoon…

-Who was in the VIP area of The Mohawk? Why Daryl & Carol from The Walking Dead, a.k.a. Norman Reedus and Melissa McBride! Got a photo of them where an excited Reedus (so unlike Daryl…) and a McBride, dressed like the badass Carol doing undercover work as a “den mom” in Alexandria, posed face-to-face. Reedus even took a photo of my photo, which I did as well, tweeted it, and got so many retweets from all of his fans/stalkers online…

-Will Butler (QRO photos) & Twin Peaks (QRO photos) @ Waterloo Records, 5:00 PM – 7:00 PM. Not only was Win Butler of Arcade Fire at SXSW, but also was little brother Will, touting his solo release, Policy.

-TV On the Radio (QRO live review), Stromae & Courtney Barnett @ Stubb’s, 9:50 PM – 2:00 AM. NPR always has a great SXSW Wednesday showcase at Stubb’s, though this year it seemed a little overshadowed on Red River Street by other events taking place there that night (not to mention the tragedy that happened on Red River outside of their showcase last year – QRO recap).