Broken Social Scene's 'You Forgot It In People' & more on SXSW Thursday.... 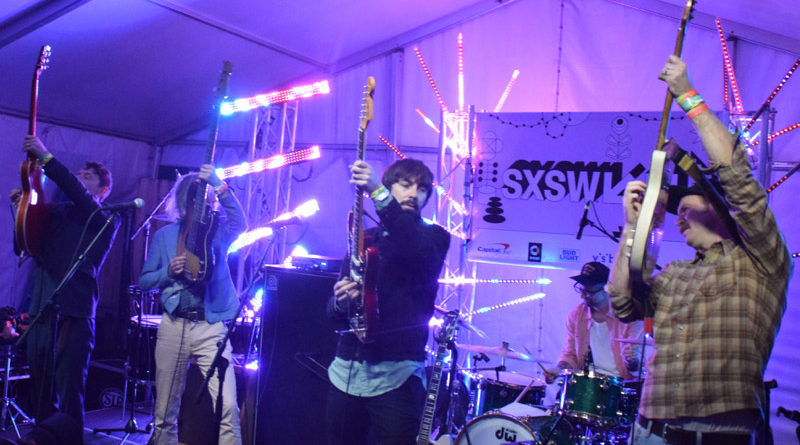 Thursday at South-by-Southwest Music often is the most-packed of the days, getting the acts arriving late and those leaving early, the multi-day parties starting late or ending early. 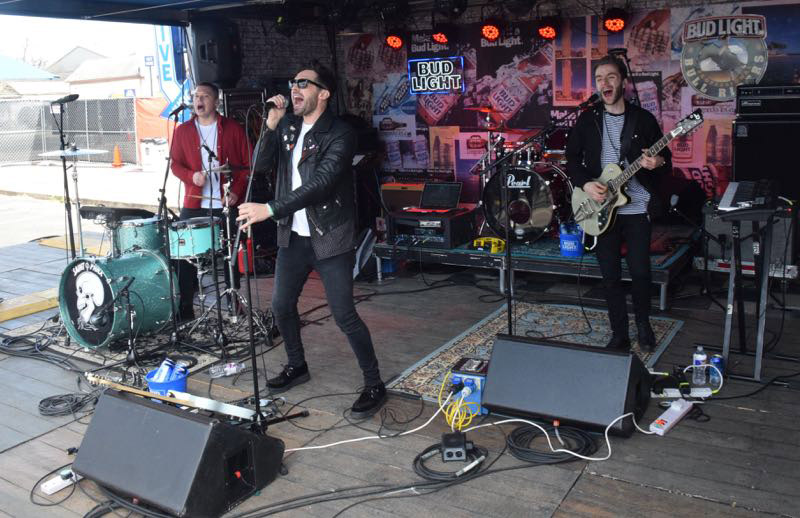 One of those parties was the Bud Light Dive Bar Sessions at Nuevo Leon. Since last year, the ubiquitous beer has had its ‘Dive Bar’ stage, a transportable set done to look like a dive bar, complete with a cigarette machine that gives out patches (and breaks down every five seconds, needing an attendant who admitted that it’s far more trouble than its worth). The stage has been at Panorama in New York (QRO recap), Lollapalooza in Chicago (QRO recap), and now SXSW in Austin.

Most importantly, there was free Bud Light (regular folks got plastic wristbands with four tabs; your correspondent got the paper VIP one for unlimited) and free music. ‘Dive Bar Sessions’ wasn’t going to recruit big-name acts, and Budweiser was going to go for more mainstream appeal, so there was the big electric uplift pop-rock of Saint PHNX (bonus points for Scottish brogue) and the more dance Walker Lukens. 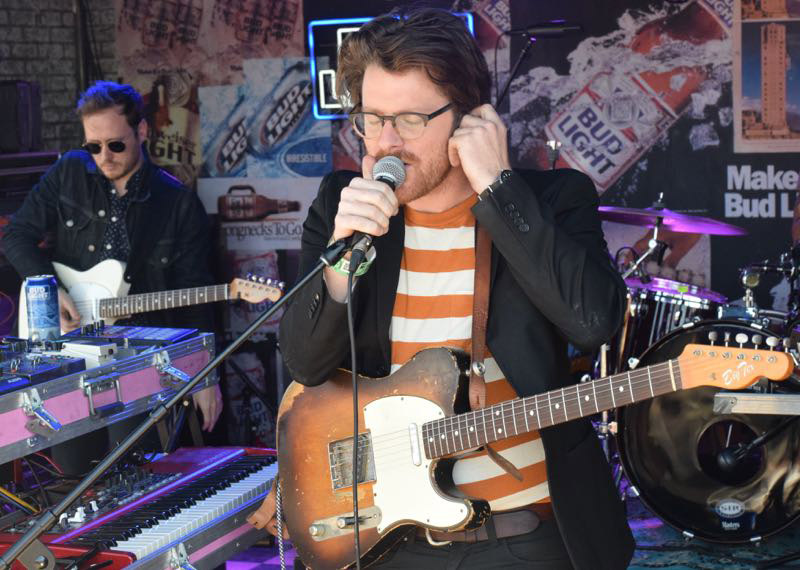 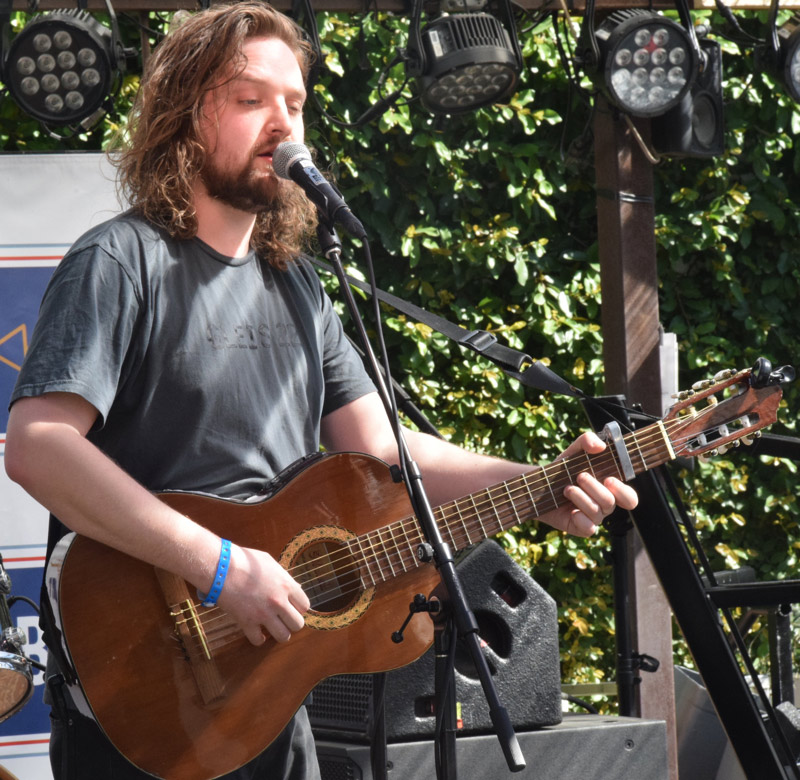 While other big multi-day SXSW parties have gone or shrunk, Rachael Ray’s Feedback House has remained, at the same spot, still invite-only, still free drinks and great free food (literally even some of the same staff). Pretty much the go-to base of operations once it opens, it’s the perfect place to hit up early for drinks, food, and, oh yeah, music, like the country-folk solo Will Varley and dance duo DRAMA. 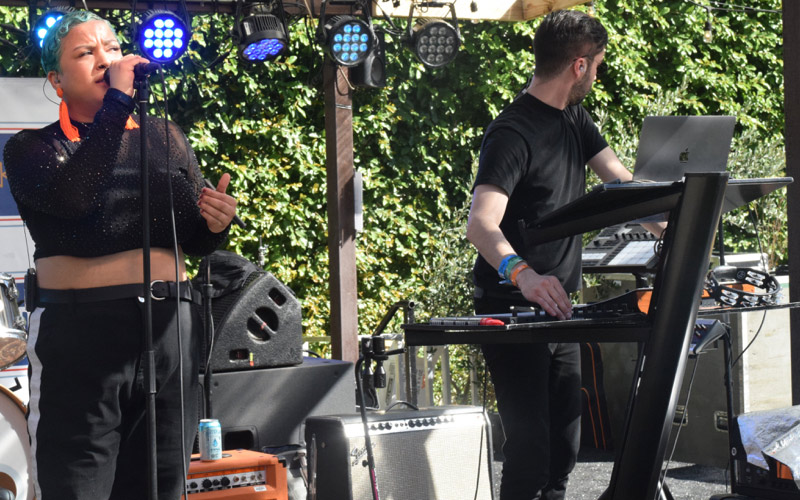 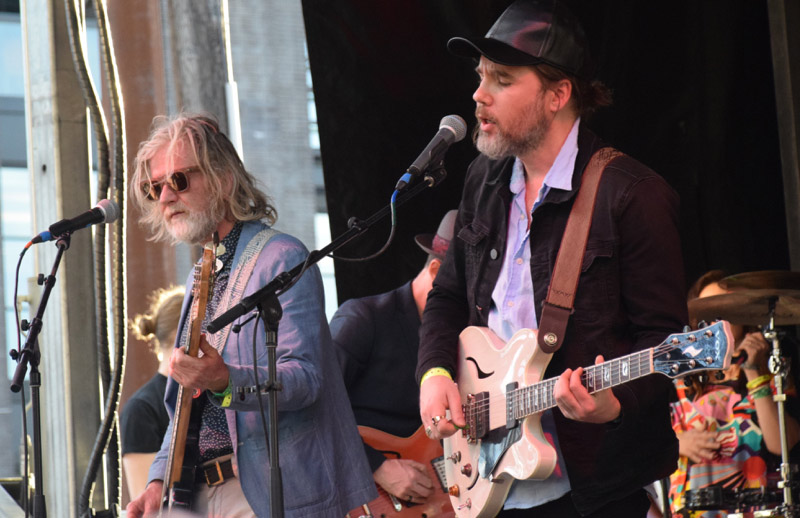 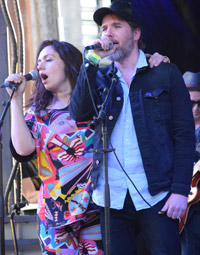 Culture Collide and Dr. Martens had one of the best one-twos at SXSW at Container Bar with The Joy Formidable and Broken Social Scene, but the whole event went wobbly. First there was missing Joy due to overcapacity & fire marshals (see ‘Unfortunately Missed’ below) – then there was BSS taking extra long to set up. “This is a cluster-fuck, but that’s what SXSW is all about, right?” said main man Kevin Drew, who also had to deal with non-working keys and getting mike feedback, “I’m getting my fucking ass kicked up here…”

Even with shaky technical, it was still the great Broken Social Scene. And Drew lightened up enough to joke about his new shoes (apparently Dr. Martens gave new sneakers to the artists playing its showcase – did it require them to wear them on stage?) and end with his refrain throughout SXSW ’19, not to use the dangerous scooters. 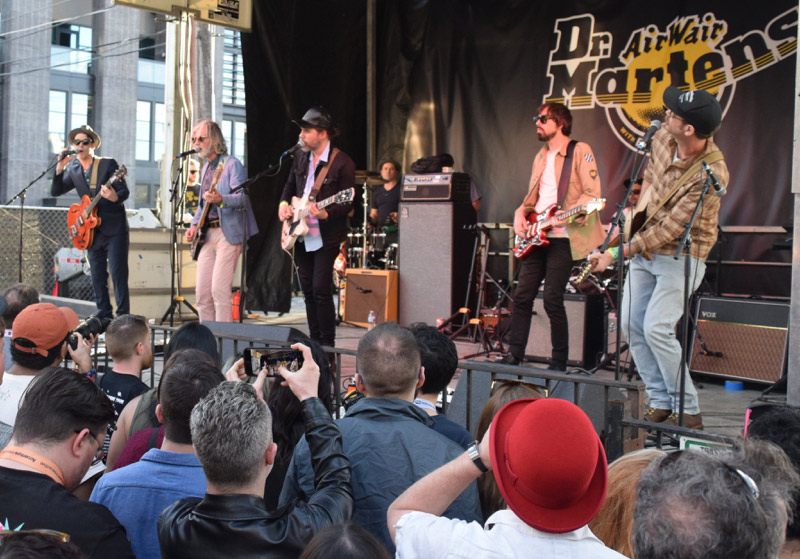 Sometimes at SXSW, the next thing you want to go to is on the other side of downtown (or worse), and you’ve got to book it to make it there before who want to see starts, or the place fills up. But also sometimes, the next place you’re headed to is right next door, as was literally the case, going from Container Bar (90 Rainey St.) to Bungalow (92 Rainey St.) for the Arts & Crafts Records showcase. This wasn’t just nice for your correspondent, but great for Broken Social Scene (who were headlining both places), and a lifesaver for Ariel Engle, a.k.a. La Force, who went from singing in BSS up to 7:00pm to starting her own band’s set at 8:00pm. 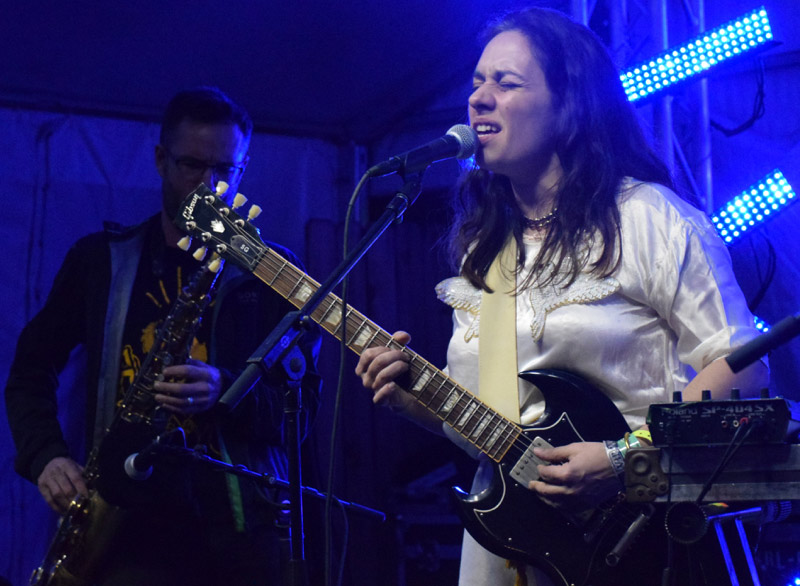 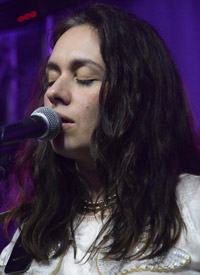 The new solo project from Ariel Engle (QRO interview), La Force’s line-up has been shifting, but this time she took the opportunity to include not only her Broken Social Scene bandmate David French on saxophone, but also fellow BSSer/husband Andrew Whiteman (QRO interview) for the first time – plus her “band in a box” (done to the tune of Justin Timberlake & Andy Samberg’s SNL “Dick In a Box”) for rhythm section & samples.

Engle & co. played off the great new La Force (QRO review), including asking BSS’ Kevin Drew to do drums on one song (to cheers, which Engle quieted down because, “I’m the star…”). And she & Whiteman even closed with a song from their pre-Force duo, AroarA (“Before there was a Swedish [artist] Aurora…”). 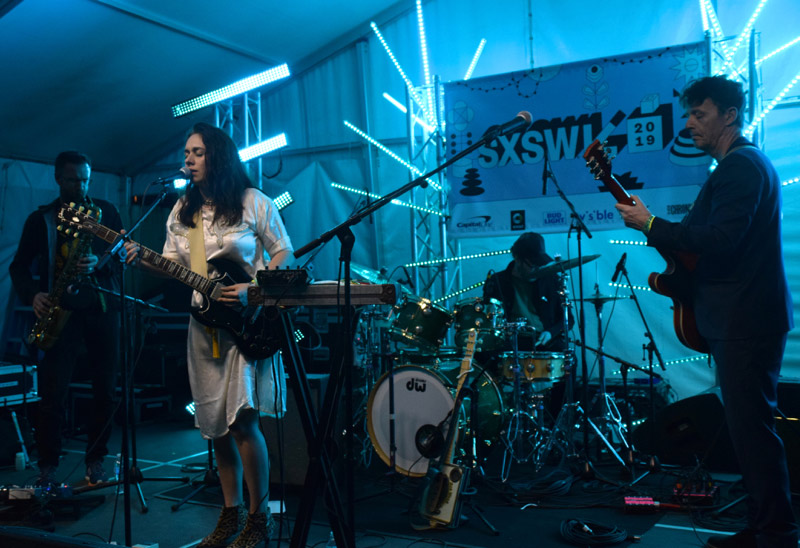 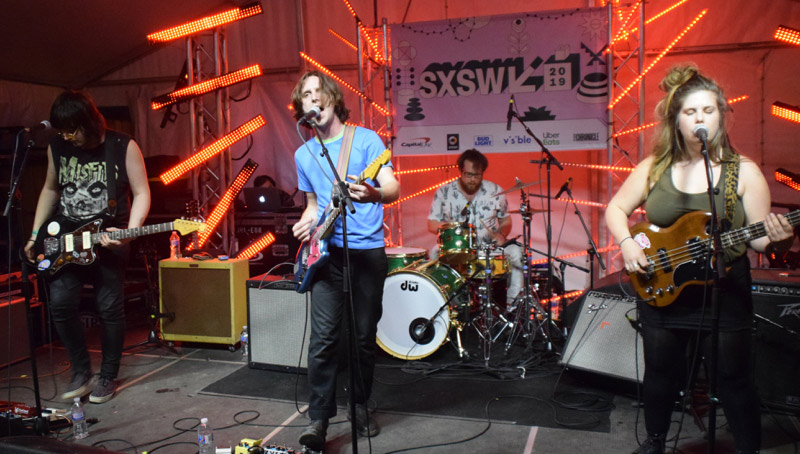 It’s tricky playing your label’s SXSW official showcase, stuck at some place assigned to them with artists you share little else with. It’s even tougher when the line-up includes the label’s biggest act playing their breakthrough record (see below), but Dead Soft delivered big and straightforward alt-rock rock, while Tamino was solo, heartfelt with guitar. 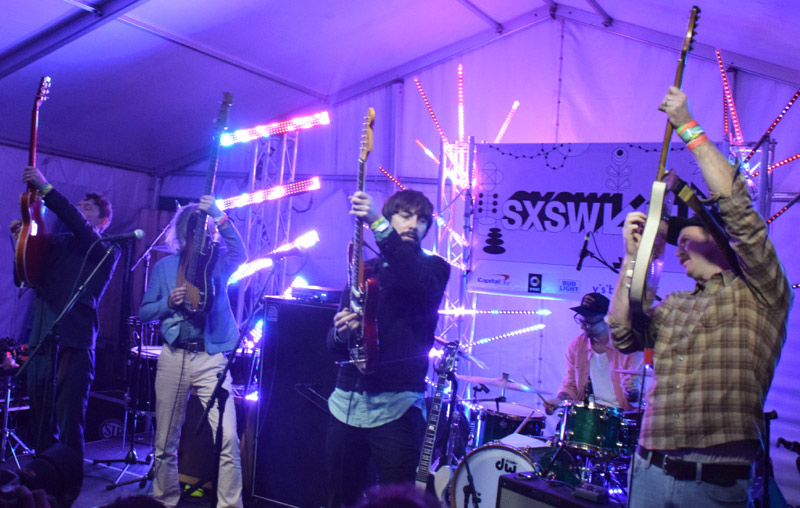 But you came to Bungalow for Broken Social Scene doing their 2003 breakthrough You Forgot It In People. For a certain generation of indie music fans, somewhere between the nineties alternative Generation X and today’s millennial hipsters, People is a seminal album, defining the ‘Canadian Invasion’ near the start of the century, with track after track of epic greatness. For a while afterwards, BSS’ later stuff seemed stuck in its shadow (and the band a little unsure of its dominance), but by this point their career has made it the first of many highlights, and perfect for a ‘play an album in full’ performance. 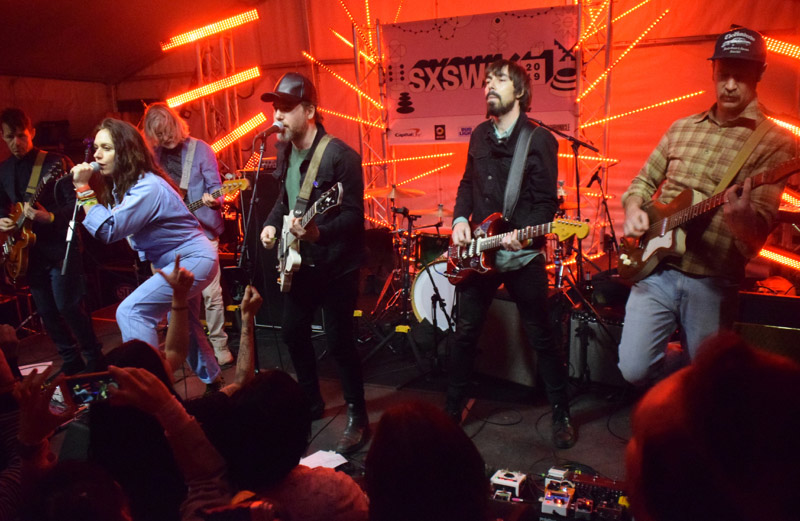 From the raised guitars to start opener “Capture the Flag” onward, it was all you could have hoped for, particularly as it wasn’t in some big awkward place, but a small awkward place. Notably, BSS slightly rearranged the track/set list for better live play, flipping “Pacific Theme” before “Looks Just Like the Sun”. There was also Kevin Drew getting serious mike feedback (again) and literally leaving the stage, with Brendan Canning covering until he came back a few minutes later. But most special, certainly most surprising, was Ariel Engle inviting special guest co-vocalist Maggie Rogers to join her/them onstage for the amazing “Anthems for a Seventeen Year-Old Girl”. 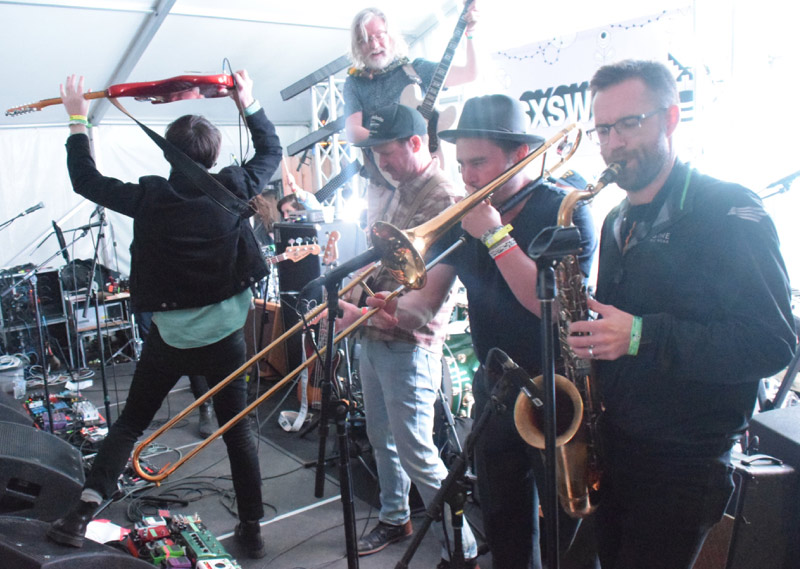 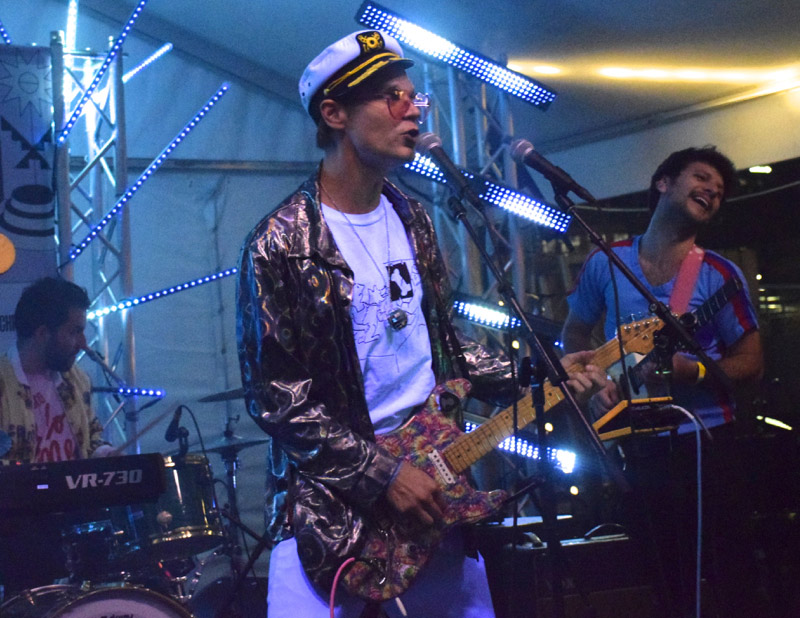 In the unenviable job of following that up and closing out the night was Baby FuzZ, who at least had fun and dressed up.

-The Bud Light Dive Bar was in a parking lot in the middle of a very sunny day, with over an hour between the first two acts. Your correspondent spent it shading his phone with his head so he could play Candy Crush, and got a tan/burn on his left hand & wrist that includes a noticeable pale area where his watch was, including circle for watch face. And it still hasn’t gone away.

-Your correspondent’s stalking of Broken Social Scene paid off in meeting & talking with various members before their Bungalow set. Though the ever-nice Canadians were hanging out in the crowd, talking to fans, which included two Saviors from The Walking Dead, Simon (Steven Ogg) and Dwight (Austin Amelio – yes, his name is ‘Austin’ and he lives in the town…). Of course, at a prior SXSW your correspondent met Walking Dead heroes (and still on the show, unlike those Saviors) Darryl (Norman Reedus) and Carol (Melissa McBride) – QRO photo.

-Willie Nelson, Nathaniel Rateliff, Nicole Atkins, Strand of Oaks & many more @ Luck Reunion. The Red-Headed Stranger’s annual get-together at his ranch has a lot of great acts, but is a full-day commitment when too much else is going on.

-The Joy Formidable @ Container Bar, 5:00pm – 6:00pm. Left the free food & drinks of Rachael Ray early to get The Joy Formidable, only to be faced with an unmoving line because fire marshals were at Container Bar. Apparently the space had gone 61 people over (or the Austin Fire Department were cracking down/power fixing), leaving the line unmoving for an hour (even members of headliner Broken Social Scene were being told to go in the other way). There were boos of the fire marshals & cheers when they left, only heard The Joy Formidable over the Container Bar’s walls made of actual containers, but it’s not SXSW without being stuck in an inexplicable line at some point (and special thanks to the SXSW volunteer who explained the situation to those of us on line who were confused, antsy, and needed to pee…).