Despite an already short last day being stunted even further by Rachael Ray, I still managed to squeeze in my favorite performance of the entire festival.

After a morning coffee and panini (the only real breakfast I ate in Austin) at Halcyon Café, and checking out of my hotel room, made my way over to Stubb’s early with the intention of meeting a friend for Royal Bangs (QRO SXSW photos) at 1:30pm.  I arrived just after noon to find lines already formed, and that they did not in fact have the RSVP I sent in over a week ago.  With plenty of time before my friend arrived I decided to wait.

1:00pm approached so did a couple friends.  One was on the list, the other, like me had gotten shut out.  Rather than spend my last few hours in Austin in line, I convinced my fellow rejectee that our time was better spent a block away at Headhunters seeing some actual music.

Another band I had heard of, but never actually heard, the Los Angeles trio Hands barely fit on the stage at Headhunters.  As they began, however, and the crowd started filling the room, I quickly forgot that we were in a cramped, tacky bar and was transported into the jungle.  The band spun a web of tribal inspired electro-rock, in turn mysterious and haunting, as well as driving and lush.  It was nigh impossible to understand any of the ethereal, falsetto vocals, but it didn’t really matter, especially during the final song, in which a driving snare drum stole the show and dragged the audience along for the ride. 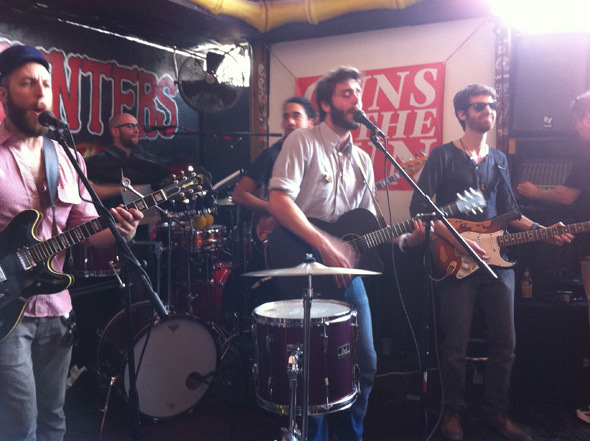 And so I came to my final performance of the festival – and one of the shows I was most excited about, even though it was sort of a last minute decision.  Another Los Angeles band, Lord Huron, kicked off their set on the Headhunters back patio with a stick of dynamite.  The crowd got right into it; crammed into corners, dangling off the balcony, lining the narrow stairwell, every single person was hooked into rapt attention.  Between the five of them and an audience swelling by the minute, we were practically on top of the band, which only exacerbated the already electric energy in the space.  They poured forth such a cacophony that the sound guy barely knew how to handle it, hovering by the mixer and making changes on the fly.  Not that frontman Benji Schneider even noticed.  He plowed through each track like a tornado, jumping around wildly, face turning bright red with the force of his vocals (which I wished I could hear better). All the guitars came through loud and clear, each one contributing a fresh nuance.  At the end of their final song the room went wild, exerting almost as much effort into praise as Schneider did on the guitar.

It was the perfect ending to my first voyage to SXSW.  I danced, I sang, I drank, I met, I learned, I walked and I conquered.  I gotta go book my hotel for next year.

-Need a good meeting place not far from the action, particularly in the morning before most of the crowds descend on downtown?  Go to Halcyon Coffee House Bar & Lounge.  I’m sure there are more, but this was my first discovery.

-It’s been said again and again, and I knew it already, but there are no lines at SXSW that are worth waiting in.  There is always another great band playing around the corner.