“It’s great to be back in Manchester,” said Kevin Parker, “and playing a venue twice the size of last time we came here. I could do this all night.”... 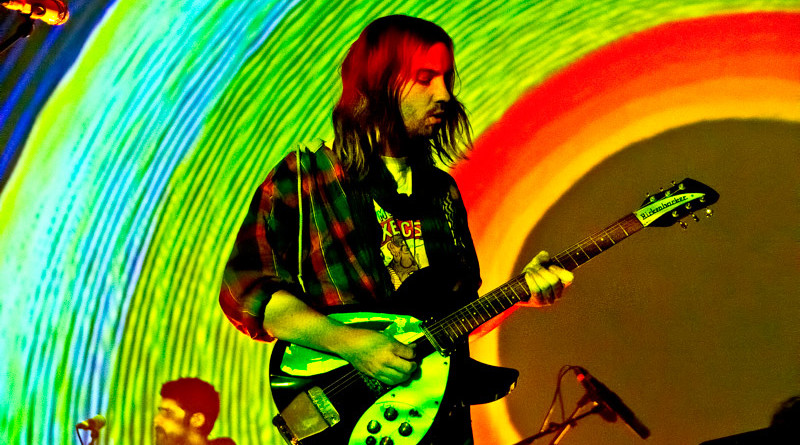 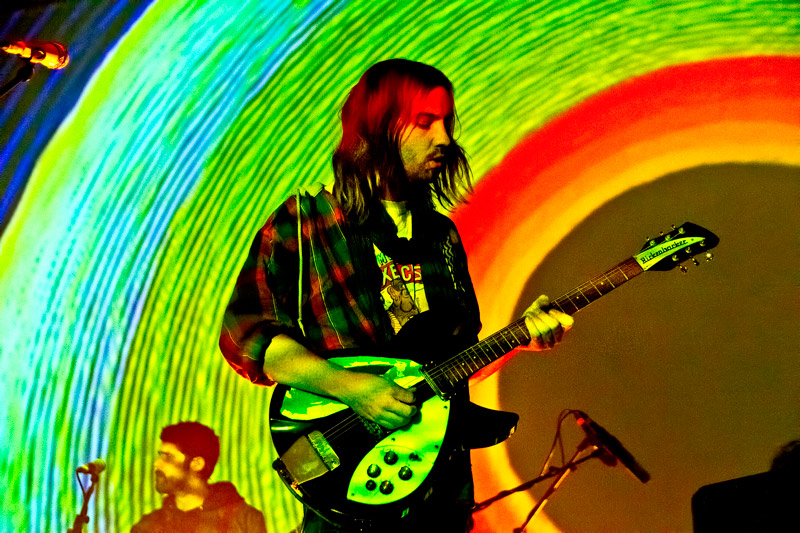 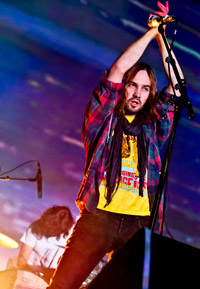 “It’s great to be back in Manchester,” said Kevin Parker, “and playing a venue twice the size of last time we came here. I could do this all night.” A bit of Googling suggests that he was referring to the band’s Albert Hall show in 2014. Missed that one.

Last time I saw Tame Impala was in a mud filled circus tent at the Beacons Festival in 2012. I don’t think many people there were claiming to be familiar with Tame Impala at the time, as they were a long way from being household names as yet, even in really cool households, but remember that they created a good buzz among the couple of hundred people present with their dreamy guitar fuelled psych.

Four years later they’re touring a synth-driven album, last year’s Currents, at Manchester Arena and it wasn’t far off full. I was up on the highest tier and below me thousands of people were dancing. Rows and rows of them, waving arms looked like the fronds of anemones in a submarine valley. I don’t go to that many gigs where people dance through the whole show. I tend to get the shows with a bit of fist pumping, a vigorous mosh pit and a ritual chart of “Ooh are ya?” It made a nice change. 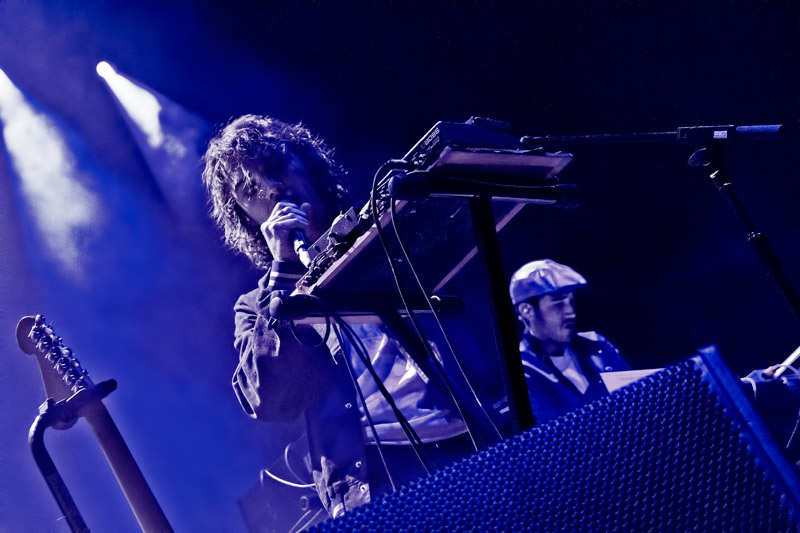 Click here for photos of Jagwar Ma at 2014 NOS Primavera Sound in Oporto, Portugal in the QRO Concert Photo Gallery

First up was Parker’s fellow Australians Jagwar Ma, playing a set filled with the spirit of Madchester. They were in their spiritual home and loving it. The worst thing about shooting and reviewing an arena gig is that you shoot three songs in the pit (when to be honest you barely hear a thing, because you’re too busy jostling the other humourless buggers for the best position) and then by the time you’ve been kicked out, walked miles of soundproofed corridors, checked you camera in and run all the way round the outer loop to get to your seat there’s only about two songs of the support set left.

It was a real nuisance this night, because Jagwar Ma were on great form. “Uncertainty” appeared early and got a sizable proportion of the crowd moving and when I got to my seat I was just in time for “Come Save Me and The Throw”. They seem to have the knack of distilling the best of the spirit of late ‘80s dance/indie crossover without self-conscious dumbness that it was frequently afflicted with. After their set they went down to Whitworth Street to dance baggily outside the smart new Hacienda Apartments. Actually made that up, but it wouldn’t entirely surprise. 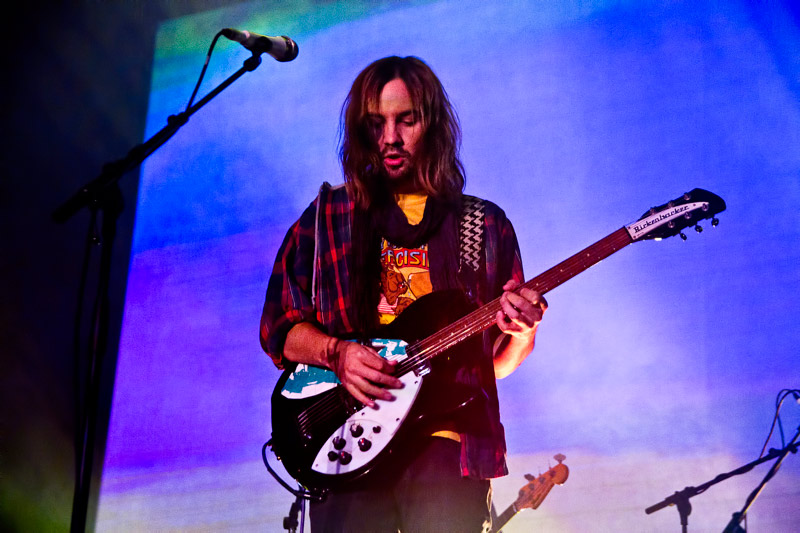 Photos of Tame Impala at 2019 Lollapalooza in Chicago, IL

Photos of Tame Impala at 2019 Boston Calling in Boston, MA

Photos of Tame Impala at Fillmore Miami Beach in Miami, FL on May 7th, 2019

Photos of Tame Impala at 2019 Shaky Knees in Atlanta, GA

Photos of Tame Impala at 2016 Project Pabst Portland in Portland, OR

Photos of Tame Impala at 2015 Lollapalooza in Chicago, IL

Photos of Tame Impala at 2015 Boston Calling in Boston, MA

Photos of Tame Impala at 2015 Levitation Festival in Austin, TX

Photos of Tame Impala at Belvoir Amphitheatre in Perth, WA, Australia on May 18th, 2013

Photos of Tame Impala at 2013 Groovin’ the Moo in Bunbury, WA, Australia

QRO’s review of Tame Impala at Crystal Ballroom in Portland, OR on June 1st, 2010

Tame Impala kicked off in fine style with “Let It Happen”, settling any nerves one might have had about how the songs from Currents would transfer well to an arena show. The answer, of course, was that they transferred very nicely thank you, the muscle of the band making for a more complex and compelling sound without losing the simplicity and sweetness of the original. And however much he enjoys composing as a one-man-band, Parker seems to enjoy the opportunity to concentrate on guitar and vocals and leave all the harmonies and keys to others. Which is not to say that it’s better than the album cuts – just that it’s nice to have both.

Much of the record’s appeal comes from the contrast between the shimmering beauty of the melodies and the bleakness of the lyrics, and the performance with the band seemed to intensify rather than diminish the contrast. When Parker sang about resigning himself to an impending whirlwind or saying sorry to his abandoned mother, it’s sounded altogether more convincing in this forum than on the album, where there was always the faintest whiff of melodrama and teenage bedroom angst. Even “The Less I Know The Better”, which features one of the least likable lyrics on the album, sounded great and “Eventually” and “Yes I’m Changing”, which combine to sum up the record’s theme of metamorphosis and discontinuity, were triumphs.

Highlights of the evening were “Elephant” (still got to love those Lonersim guitar tracks), a synthesis of T-Rex and early Dr Who that came bounding out into the arena like its eponymous hero, gloriously rollicking and rolling at one moment then suddenly changing pace and seeming to stumble, only to pick itself up again for another canter, and “Oscilly” a non-album song seldom encountered before, but which gave Parker the opportunity for an extended effects pedal solo, during much of which he stood with his back to the audience admiring his handiwork on the big screen where circles of fluorescent green danced in tune to his guitar.

After “New Person, Same Old Mistakes”, we were all out into a cold Manchester night but everybody looked like they were up for more dancing so hopefully there were some good parties to go to. 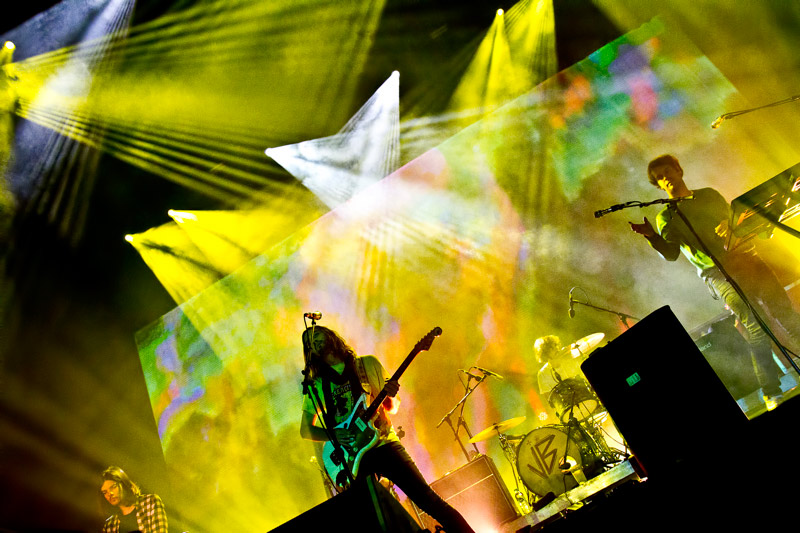