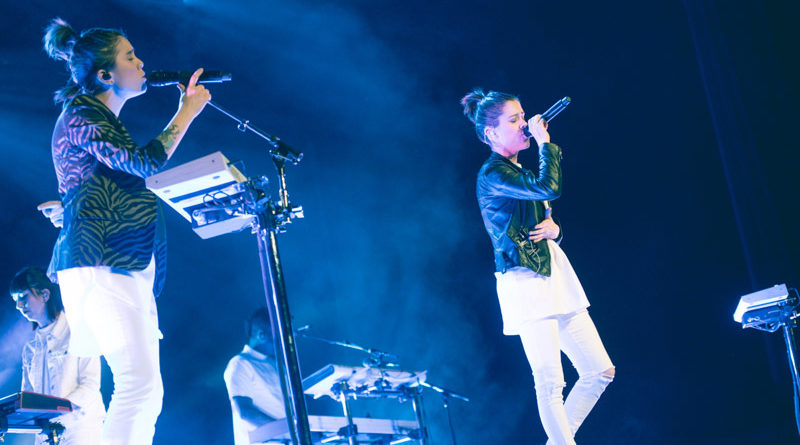 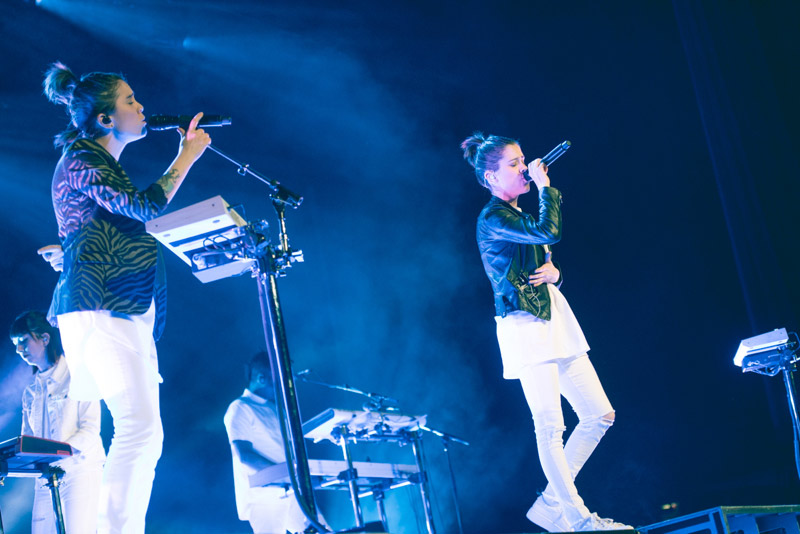 When Tegan & Sara came out with Heartthrob (QRO review) in 2013, much was made of the indie twins moving into an electro-pop sound, a style that continued this year with Love You To Death (QRO review). But, as the sisters Quin explained at their Friday night show at Theater at Madison Square Garden on November 4th, “We just don’t cry while we’re singing anymore…”

It was a big show – Theater at MSG might be one level, but it slopes back and up a great ways – and an early one, ending by 10:00 PM (Sara said that she expected the crowd were all cool because they were from New York, and would be going to a rave or BDS&M club afterwards…). And yes, the audience definitely leaned towards the young women (your correspondent felt like the tallest person there…), reflecting the Quins themselves. But the fans were not just those who had jumped on the pop train – “I last saw them in the aughts, so pre-techno…” was overheard before the set began.

Yet Tegan & Sara started the night with something of a curveball, or at least a surprising choice for first song, “Back In Your Head”. The great single from 2007’s The Con, it wasn’t a shock that it was on the set list, as the single & album were their breakthrough, but that they would start the evening with it. Indeed, The Con would be well represented on the extensive, 24-song set list. 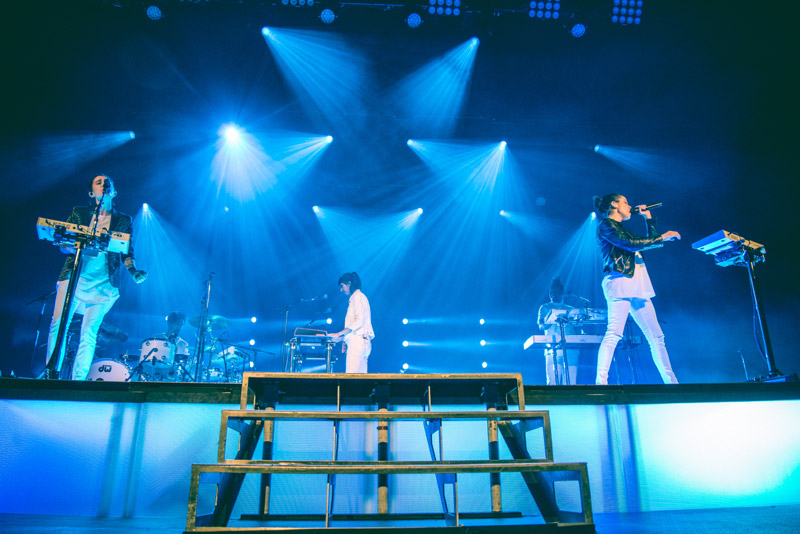 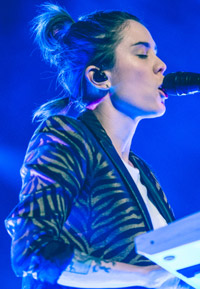 Still, the selection did lean towards the electro-pop Love and Heartthrob – following “Back” was four from Heartthrob, going against the usual tendency of acts to play fewer numbers from their second-most-recent album, when touring the newest. But you can’t go wrong with songs like exuberant “Drove Me Wild”, and Heartthrob tracks such as “Goodbye, Goodbye”, “I Was a Fool”, and “Shock To Your System” particularly lit up live (helped by the light-up stage riser that whole band was on – it made them easier to see both in location & in light). Admittedly, after the big beginning, the crowd a little bit ran out of their initial adrenaline, the show moving more into emotion – it came the time when the couples in the venue would kiss. 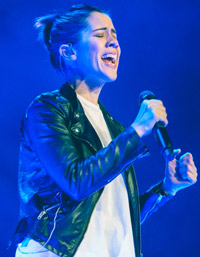 More than once Tegan & Sara would go on a run of songs from one album, Heartthrob at the beginning, The Con in the middle (the first two of four in a row, “The Con” and “Call It Off”, were done by just Tegan & Sara solo), and Love You To Death near the end. Indeed, it seemed that 2009’s Sainthood (QRO review) was the recent album not played that much, with only two, “Alligator” and “Northshore” – back-to-back.

In addition to pieces such as “Northshore” and “Call It Off”, the Love backend stood out with “BWU”, “U-Turn”, and single “Boyfriend”, then Heartthrob single “Closer”. Never abashed about their politics, gender, or sexuality, those tracks particularly saw the lesbian Canadians speaking out for love of all stripes. “Boyfriend” and “Closer” also made for peak dance on a very danceable night, going into their encore break. After that, the encore could have only been Tegan & Sara’s softer side, with Love’s “100x”, So Jealous’ “Walking With a Ghost”, and Love’s “Stop Desire”. 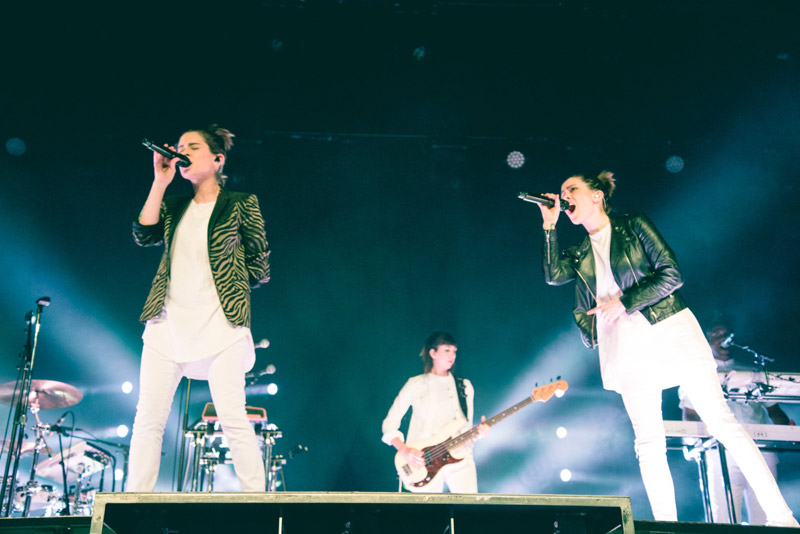 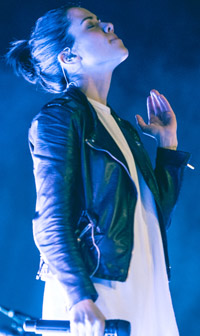 It should not be overlooked that Tegan & Sara are also incredibly in their between-song banter, which kept up this night. Indeed, Sara remarked that they became known for it, as a big pop star they opened for in 2000 (left unnamed, just referred to as “Big Bird”) called them the “funny band” – and this was back when they were still in their period of crying while singing. Tegan said how they now acknowledge how funny they are, at least on stage, and only get insecure off-stage afterwards.

One aspect of their banter that ran through was both of them was reflecting on how long they have been making music & touring. Tegan mentioned coming to play New York again and again, going from playing dingy places to great places, going from staying at terrible places to still staying at terrible places, until Sara moved to the city (now Tegan just goes from being at Sara’s nice place to her own not-great place). Sara said how much better the States have gotten to the Canadians since they started touring, before adding that Donald Trump was going to turn thing back (being Canadian maybe kept them from getting too political – the election advice was a message from the Canadian government, “Justin Trudeau is my father – I didn’t get his looks, unfortunately…”). 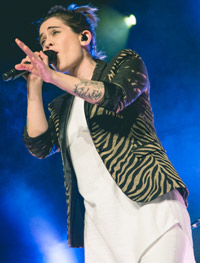 There was also one really startling moment, just before were about to dance up a storm to “U-Turn”, when Tegan (QRO interview) went to the front of the stage to help resolve a spat in the crowd. She didn’t know what was going on, but remarked that there were a lot of men (security) trying to resolve things and not succeeding, so maybe a woman could, “Do it like Hillary Clinton.” In maybe the nicest way ever to get a (presumably drunk) fan to stop causing problems and move, Tegan sweetly asked a girl in the front to watch the show from the side so everyone else in there could enjoy it, but she should still enjoy the show herself, and Tegan still loves her. It might come as something to a shock to outsiders (like security) that there would be a fight at a Tegan & Sara show, but in a more liberated environment, perhaps women are free to be just as extreme as men (the only fight your correspondent saw at Chicago punk rock festival Riot Fest in 2014 was during Tegan & Sara’s set – QRO photos). While definitely an awkward moment, it was handled really well (reminiscent of a fight in the front of a Florence & The Machine show a few year ago being broken up by Florence Welch herself – video) – and it’s nice to know that the stars can see their fans, even when not cheering. 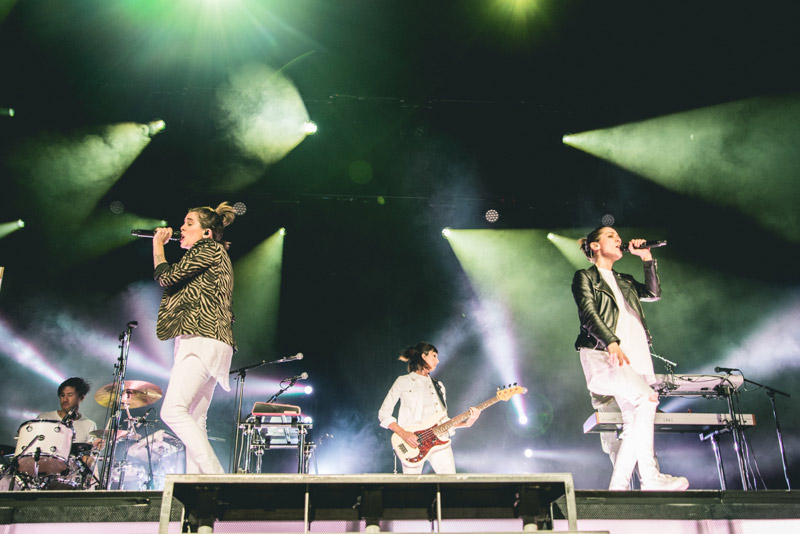