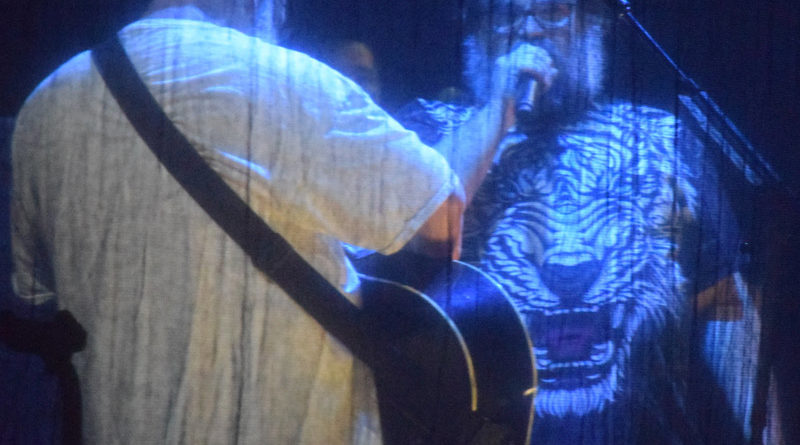 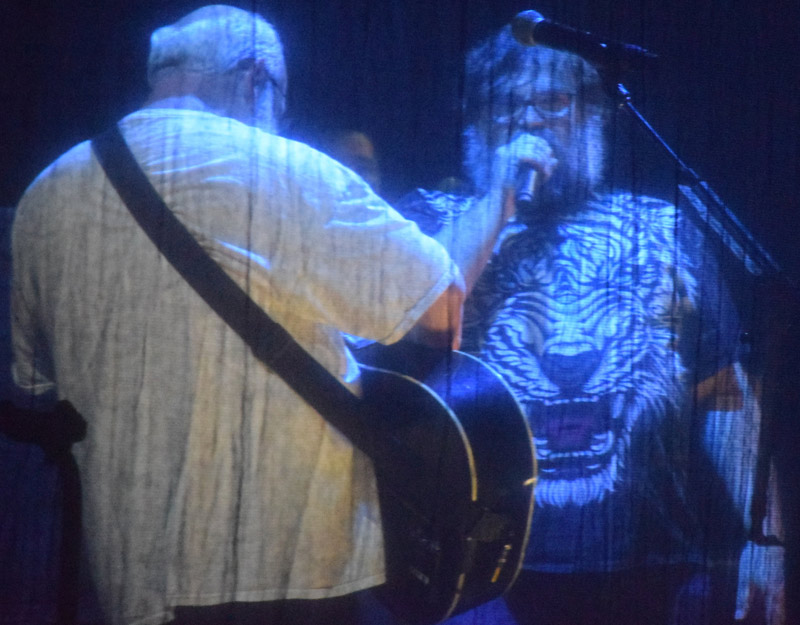 Click here for photos of Tenacious D at Coca-Cola Roxy in Atlanta, GA on August 6th, 2019 in the QRO Concert Photo Gallery

Click here for photos of Tenacious D at Fox Theatre in Oakland, CA on December 18th, 2018 in the QRO Concert Photo Gallery

Click here for photos of Tenacious D at 2018 Shaky Knees Fest in Atlanta, GA in the QRO Concert Photo Gallery

Click here for QRO’s review of Tenacious D at Stubb’s in Austin, TX on September 20th, 2017

Tenacious D, actors Jack Black & Kyle Gass’ comedy-music project, started as a short-lived HBO series before becoming a full-fledged band and even a movie. Yet it’s largely been a stop-start affair (Black’s got to make his Kung Fu Pandas and Jumanjis), and not just because the 2006 movie Tenacious D and The Pick of Destiny was a “bomb,” as they stated in 2012 comeback record Rise of the Fenix (QRO review). This year has seen it definitely start again, with their handmade cartoon web series and accompanying album, Post-Apocalypto, whose live show debuted a day after the album and final part of the web series dropped, at Brooklyn’s Kings Theatre on Saturday, November 3rd.

For a project with more crude drawings of penises than an eight-year-old’s notebook, it took place at a decidedly classy place, the newly reopened Kings Theatre (QRO venue review). A line snaked down the block and around the corner as people filed in, and the crowd remained seated throughout the Post-Apocalypto portion of the evening (minus a few folks who tried to sneak forward and thought that they were entitled to stand in front of others, but were caught by security). A white semi-transparent screen was draped over the front of the stage for projection of the cartoon series, only showing The D through it during songs.

[Note: Photography was only allowed during the first three songs, all Post-Apocalypto with screen in front] 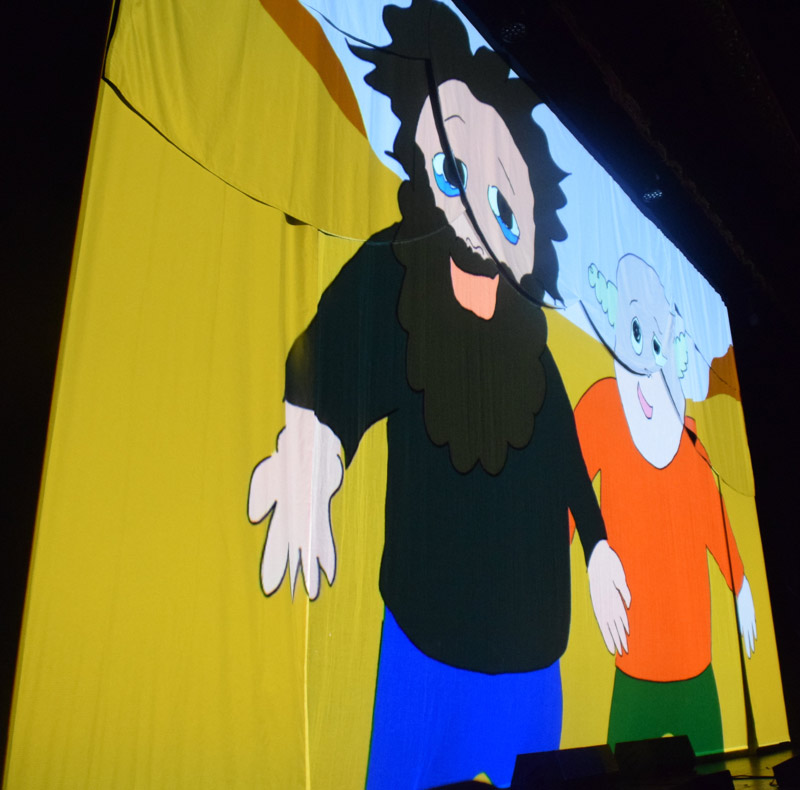 Post-Apocalypto the album (QRO review) is a shortened version of the web series, skipping a number of plot points (like Jack Black Jr.’s robot from the future tricking Donald Trump Jr. with a great blowjob). The live show was between the two, but kept the large majority of the web series (with sixties Batman logo-like segues when needed). The crowd seemed mixed between those who had watched the series and those who hadn’t, and thus laughed harder at the jokes, but were less familiar with the songs. At this point, so soon after Post-Apocalypto had been released, it was probably best not to know the material, and enjoy the jokes live.

[Note: This means that your correspondent will refrain from retelling the adventures of JB & KG after the nukes dropped, but suffice to say it involves everything from sex to space to KKK to pyramids to sex] 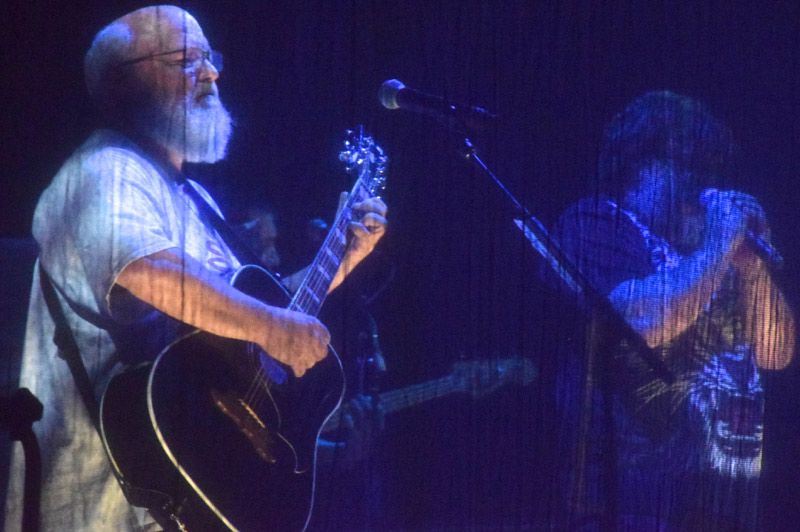 After the closing reprise of the series’ theme song, the screen was raised, the crew came out to change over the set, and The D came out to talk to the crowd – stating that they were buying time to change the set. Black used his phone to have the crowd ‘rock the vote’.

Gass had noted the standing ovation at the time (“We should change our name to “Standing O”), but Black actually had the crowd sit back down again. There would be a number of risings and seatings in the back half of the set, the audience wanting to rock out, but also largely not wanting to block the view of those behind them (and at $13.00 for a Bud Light, it was hard to get too drunk to go wild in the refined space). 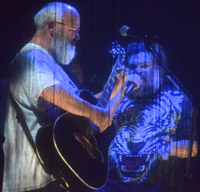 Highlights of the “Tenacious D greatest hits” second part included all the guitarists in the five-person band playing to the drummer at the end of “Low Hanging Fruit”, only to turn back to the crowd at the last second, citing their 2016 Grammy win over the likes of Metallica, Anthrax, and Slipknot before playing the winning “Dio”, and giving the rest of the band introductions and times to solo during “Double Team” – Black and/or Gass would literally step offstage to give a backing band member time in the spotlight.

And there were many sing-alongs. It wasn’t surprising that the crowd knew Black’s great, funny lyrics, particularly of old live favorites such as “Kielbasa”, “Tribute”, and encore “Hard Fucking”, but still quite something to have the crowd sing along to literally every word.

Even considering all the different formats that Hollywood Jack and Rage Kage have done The D, their Post-Apocalypto web series is them at their most D, dick jokes and all. And their new live show brings that – and more. 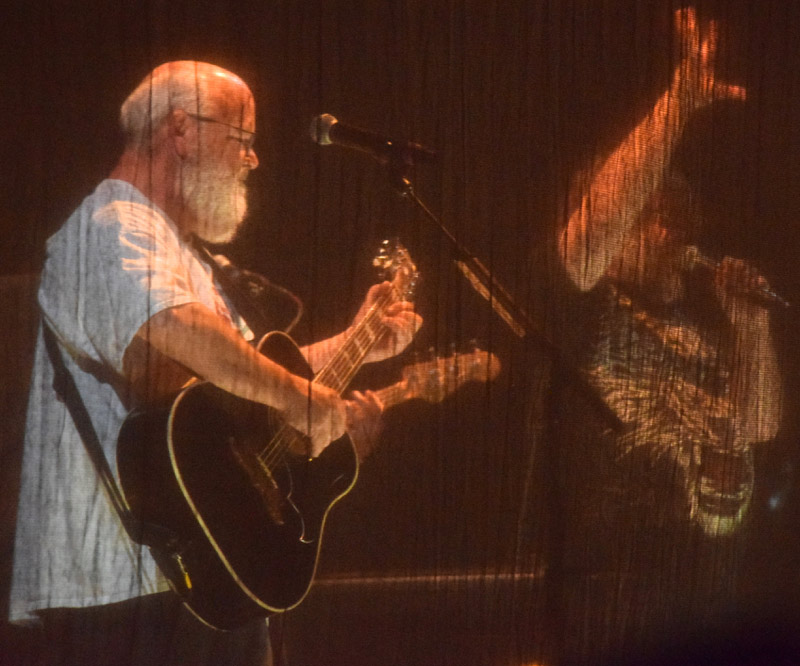