The night air was filled with rain and the sound of bells. Ringing in The Damned.... 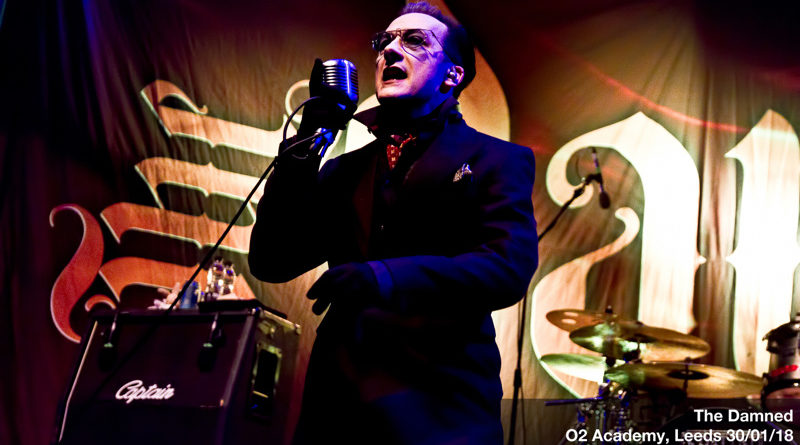 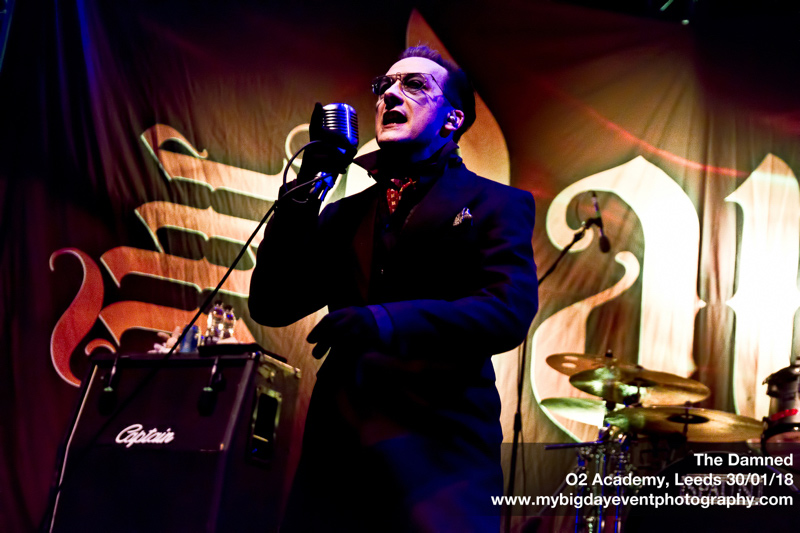 As I made my way from the car park to the O2 Academy in Leeds for the show on Tuesday, January 30th, the night air was filled with rain and the sound of bells. Ringing in The Damned. The original goth punks were rumoured to be on good form, with a new album in the works, a single getting plenty of attention, and the return of Paul Gray on bass, and there was a long queue waiting to get out of the drizzle. 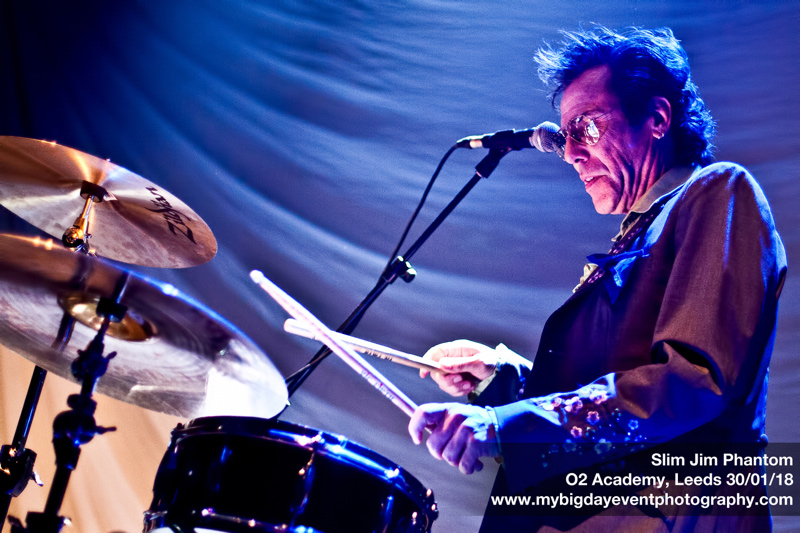 First up was one of the best surprises I’ve had in a long time. Usually before I set out for a show I check to see who the support are but on this occasion I’d forgotten to, so it was a real pleasure to find that it was no less a personal hero than Slim Jim Phantom, Stray Cats drummer and rockabilly guru playing some of the rawest rock and roll you ever heard. The other two places in the trio are a movable feast (I believe Captain Sensible and Dave Vanian sometimes appear), but on this particular night the top class sidemen were James Walbourne and Nick Wilkinson, whose day jobs are as guitarist and bass player respectively for The Pretenders.

Their set took in classics spanning the history of rock and roll from Carl Perkins’ “Matchbox” and The Womack’s “It’s All Over Now” to a terrific “That’s Alright Mama” that set off at a slouching amble before bursting suddenly into a run and reminding us all just what it was that made rock and roll great in the first place. They tied things up with the Cats very own contribution to the rock and roll classic songbook – “Rock This Town”. 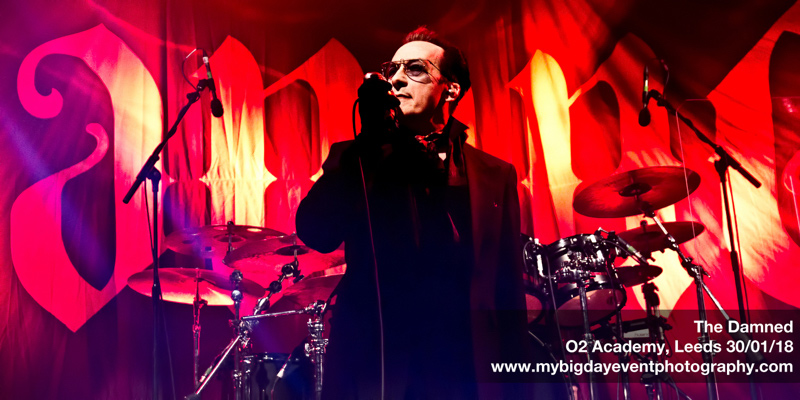 Click here for photos of The The Damned from 2018 Vive Le Rock Awards in Islington, U.K. in the QRO Concert Photo Gallery

Click here for photos of The Damned at 2017 Primavera Sound in Barcelona, Spain in the QRO Concert Photo Gallery

Click here for photos of The Damned at Gramercy Theatre in New York, NY on October 30th, 2016 in the QRO Concert Photo Gallery

Click here for photos of The Damned at 2015 Riot Fest in Chicago, IL in the QRO Concert Photo Gallery

Click here for photos of The Damned at SXSW 2015 in Austin, TX in the QRO Concert Photo Gallery

Click here for QRO’s review of The Damned at Chesterfield Winding Wheel in Chesterfield, U.K. on December 4th, 2013

Click here for photos of The Damned at 2012 Wychwood Festival in Cheltenham, U.K. in the QRO Concert Photo Gallery 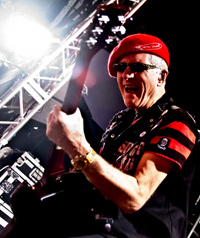 And so on to the main event and the Academy was pretty much full for The Damned, who opened with “All Messed Up”, “Lively Arts” and “Silly Kids Games”, representative of a set that was heavily weighted towards the band’s glory days from the late ‘70s until the early ‘80s. 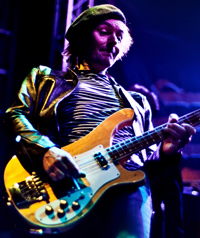 There’s a great British tradition of looking for the clay in the feet of our musical heroes, and as such I feel like I ought to say at this point that The Damned weren’t a shadow of their former selves. We don’t have Johnny Hallydays in England.

In fact, The Academy crowd was treated to a great show with the band on excellent form, having a fine old time and reveling in the sheer joy of making some very loud music in company of several thousand like-minded individuals. What more could you ask? 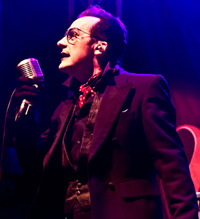 Front and centre, Dave Vanian was bathed in Hollywood light as he strutted his stuff with his retro mic and long black coat, while over to stage left The Captain had found himself a little pool of purplish darkness in which to hop and bop and twist, leaning over his guitar like a tangled marionette and offering occasional pithy comments. Paul Gray danced almost non-stop and even Monty Oxymoron managed to escape his decks for a few brief moments of electrifying dad dancing during “New Rose”. 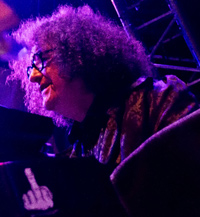 Highlights included an anthemistic “Stealer Of Dreams”, a raucous “Elouise” and the new single “Standing On the Edge of Tomorrow”, featuring some ringing guitar riffs, but what was most noticeable was how adeptly the band switched styles, one moment full on punk, next moment Vanian was transformed into a Neil Diamond style crooner. At one point he was a fire and brimstone Old Testament prophet conducting a chorus of “Woah ah ohs” on “Devil In Disguise”, next he seemed to be channeling the spirit of The Housemartins.

The show closed with a mixture of old and new including “Generals”, “Evil Spirits” (again the forthcoming album sounding like a good thing), and the classic “Smash It Up”, before the band responded to the appeals of the assembled company by returning for a final cover of the Elton Motello classic “Jet Boy, Jet Girl”. 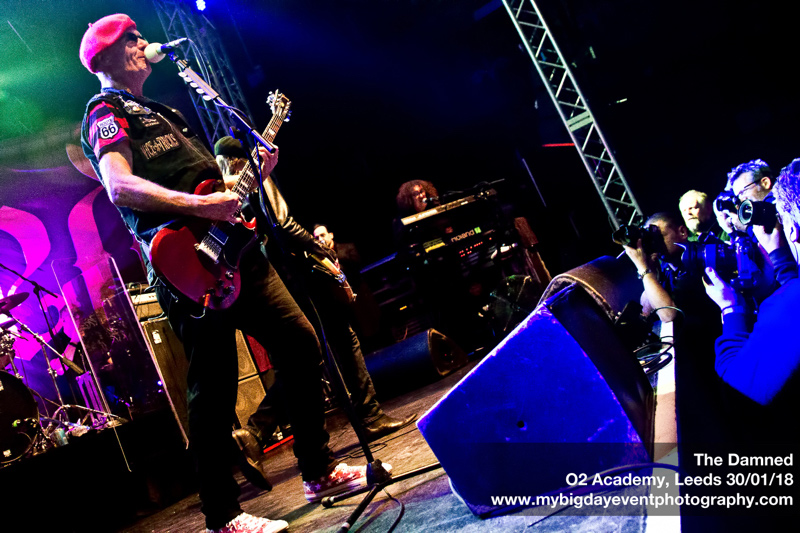