The Joy Formidable opened up at New York's Terminal 5 for the second night in a row. ... 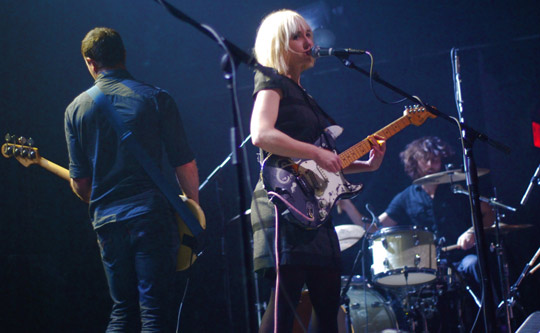 Being the opening act at a massive place like the three-floor converted warehouse Terminal 5 (QRO venue review) in Manhattan’s West Midtown is never an easy or comfortable situation – for the opener, the place ain’t full, especially the stage floor, those who are on the stage floor are fanatics for the headliner & have gotten their front spot early, people are still streaming in, Terminal 5 is a bigger place than the opener’s used to playing, those who are there don’t know the opener, etc.  But The Joy Formidable faced special, even tougher odds when they opened for Passion Pit (QRO photos) at Terminal 5 on Saturday, January 9th. 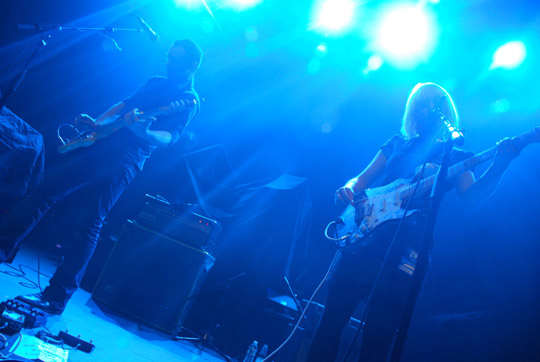 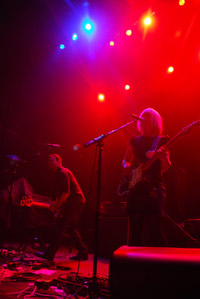 Passion Pit played three nights at Terminal 5, Friday through Sunday, and this was the second night The

Joy Formidable served as opener – though at least they weren’t first opener, as they had been on Friday (main opener that night was The Rural Alberta Advantage – QRO live review).  Indeed, the start times to the evening had been bumped forward: instead of the first opener an hour after doors, and each subsequent act an hour after that, after the 8:00 PM doors, first opener Arms (QRO photos) went on at 8:45 PM, then The Joy Formidable at 9:30 PM, and Passion Pit at 10:30 PM.  While Arms got a pretty light crowd, at least this time The Joy Formidable saw a much healthier one. 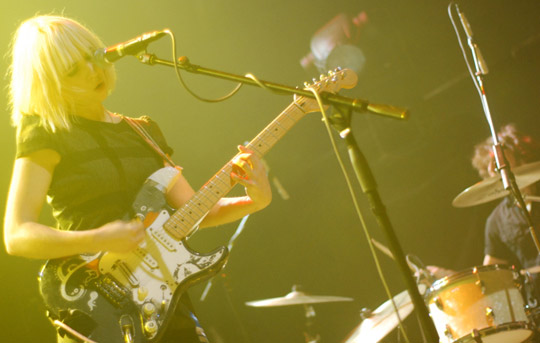 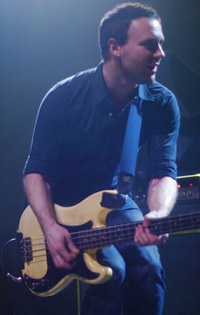 And a very young one.  Terminal 5 is an all-ages venue, so it naturally draws a younger crowd than its smaller Bowery Presents brethren like Webster Hall (QRO venue review), but the audience on Saturday night was really young.  As a more regular concert-goer there that night said, “When did everyone suddenly become 17?”  And not only were they young, but also decidedly ‘Bridge & Tunnel’ (i.e. not Manhattan), dressed to the nines like they were ‘goin’ out’.  It wasn’t quite Jersey Shore meets indie-rock (there is an actual show like that in the works, though…); the audience was younger and more Long Island/Westchester than Garden State.  It was also skewed towards the girls, the kind who’d take photos of themselves at a show – though with packs of guys as well.

Security must have had their hands full preventing underage drinking (though there were still waits at the bars – those who could drink would order the fanciest, most complicated, time-consuming drinks), because they didn’t bat an eye at teens smoking, obviously and mere yards from security.  But security had their toughest assignment when a girl right near the center-front of the stage floor, only a few people back from the photo pit barrier, vomited – right as The Joy Formidable began.  It took nearly the JF’s whole set for the staff to make it to the space created by the incident and mop it up (all happened right behind these nice people). 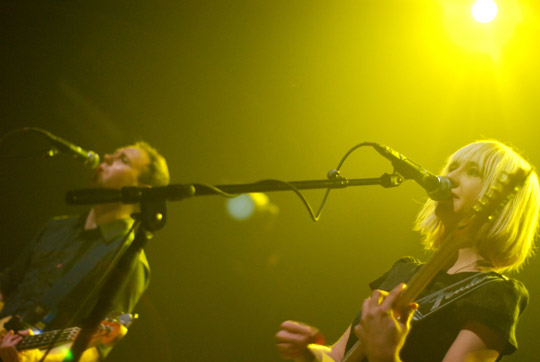 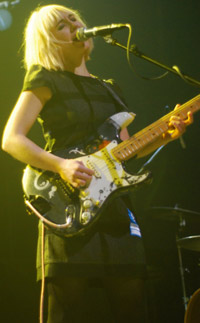 And that space was right in front of JF singer/guitarist Ritzy Bryan.  Sporting a very blond haircut that looked like somewhere between early eighties Deborah Harry (of Blondie – QRO photos) and a modern Swedish pop singer, the north Wales native actually sounds like the closest approximation of that: Maja Ivarsson of The Sounds (QRO live review).  But as a band, The Joy Formidable go for a pressing indie-rock, with touches of electronica and expanse, on 2009 debut A Balloon Called Moaning, and that stayed 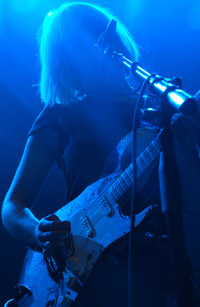 true to that at Terminal 5.  In fact, the band started with the first two songs from A Balloon, “The Greatest Light Is the Greatest Shade” & “Cradle”, and like on the record, the two pieces kick things off very well – so well that the rest of the album & live show can’t quite match up.  “The Last Drop” did excel its somewhat ‘standard’ feeling on A Balloon, and single “Austere” had more energy (but for real energy, check out the fan-made music video for the song, which has been banned from YouTube – link), but the wash-rock of final two “Ostrich” and “Whirring” couldn’t match “The Greatest” electricity (curiously, first opener Arms also has a song called “Whirring” – QRO album review – has there even been a time when two bands played two different “Whirring” songs on the same stage?…) 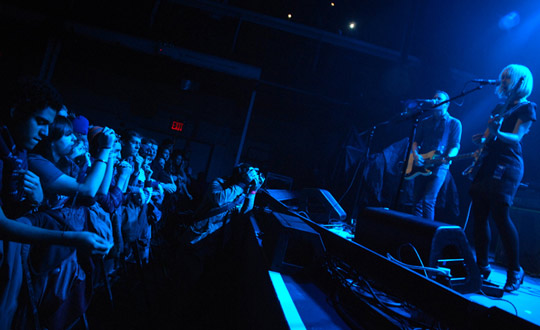 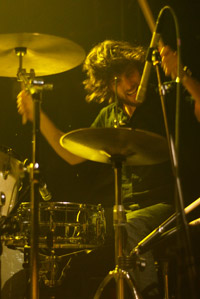 The young crowd seemed somewhat indifferent during The Joy Formidable’s songs, but cheered mightily at the end of a song (though this was cut somewhat by The Joy 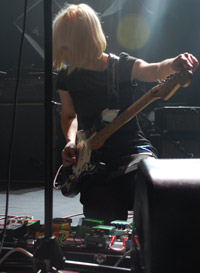 Formidable’s tendency to slide right from one song to another, even when Bryan had to tune in between).  Terminal 5 delivered a great light show, as always, though half of the stage for JF was occupied by Passion Pit’s equipment.  However, this did mean that drummer Matt Thomas was pushed to the front, on line with Bryan & bassist/boyfriend Rhydian Dafydd (now there’s a Welsh name…), and his energy was 110% throughout the short, six-song set. 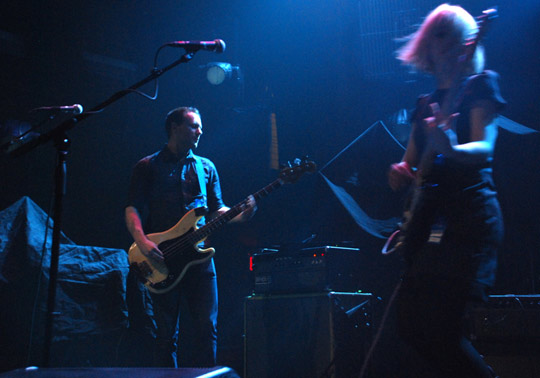 From their two nights at Terminal 5, The Joy Formidable stay in New York a bit longer, to headline the (much smaller) Union Hall (QRO venue review) on Monday (QRO concert listing) and Piano’s (QRO venue review) on Tuesday (QRO concert listing), where at least the crowds will be 21+ (and hopefully, no puking).  But they more than held their own under trying circumstances at a massive venue. 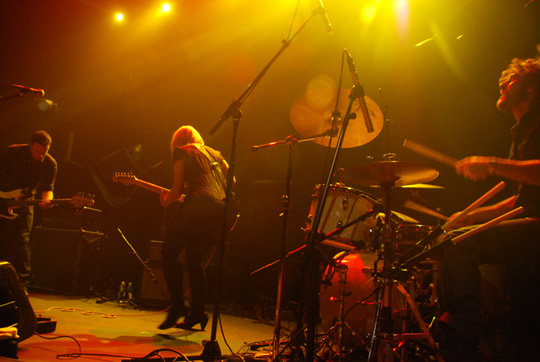