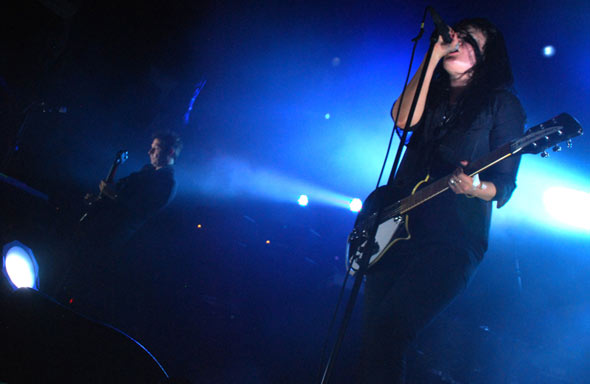 "Today, people don’t believe in anything."  Before The Kills took the stage at Terminal 5 (QRO venue review) in New York for their first of two nights there, Monday, August 8th, they were introduced by DJ/photographer B.P. Fallon (who’s done everything from be the publicist for Thin Lizzy to appear in a John Lennon video to releasing a ‘three-sided’ seven-inch on Third Man Records).  He told the crowd that when he was taking a taxi from JFK Airport (came to the America for Escape To NY Festival – QRO photos), his taxi driver (after calling Fallon "sir", something the sixty-five-year-old man doesn’t like to be called…) said that, "The problem is, today, people don’t believe in anything.  They don’t believe."  Fallon then went on to refute this by listing the things he believed in, like Elvis Presley, Oscar Wilde, Charlie Chaplin (Fallon had the hat…), you and me, and come what may.  And in Jamie Hince & Allison Mosshart – and after a Kills show, you will believe too.

When Fallon first repeated what his taxi driver told him, someone in the crowd shouted, "Fuckin’ hipsters!" – and hipsters would likely be 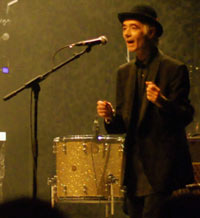 prejudiced against The Kills.  First off, they’re a successful band (though still on U.K. independent imprint, Domino), charting with this year’s Blood Pressures (QRO review).  They’re also famous – singer Allison Mosshart just came off a stint with the super-famous Jack White (of The White Stripes – QRO live review – not that you needed to be told…) as The Dead Weather (QRO album review), while guitarist Jamie Hince is married to super-model Kate Moss (she sure likes her English garage-rockers – and he seems to like his ladies named ‘Moss…’). 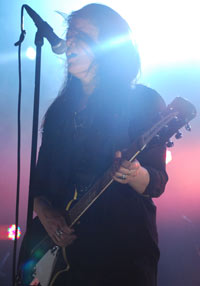 They’re a duo without a drummer or bassist, employing – horrors! – a drum machine.  Mosshart is beautiful, and from Florida – both sure to reduce her indie-cred.  And their garage-rock grinds it out with a raw, visceral force, a far cry removed from precious singer/songwriters or multi-instrumentalists.

But all of those hipsters should just experience The Kills live.  That raw, visceral force is a powerful one, capable of breaking down the thickest of hipster walls.  Allison Mosshart is an incredible frontwoman, sweaty hair whipping around like Jada-Pinkett Smith only wish she could – can’t quite say ‘this generation’s Janis Joplin’ (hesitate to say anyone is ‘this generation’s [sixties icon]’, even Kurt Cobain…), but she’s definitely in that vein, bucking forward and back when not leaning over the crowd (or the occasional Prince-in-Purple Rain twirl…), inspiring adoration/obsession in girls & boys alike.  Jamie Hince’s guitar work could be a grind to listen to, all distorted and stop-start, but instead hits hard in some deep, primordial area of your brain (or soul) – and the added bass only makes it hit harder.  All that, plus the drum machine puts down a beat so solid it puts most living, breathing drummers to shame. 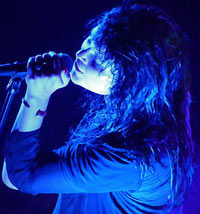 The set list (QRO photo) was about half Blood Pressures, half not, and, admittedly, could have been a bit better chosen.  They still killed it with strong Pressures songs like "Future Starts Slow", "Heart Is a Beating Drum", "Satellite", "DNA" (which Mr. Moss dedicated to his wife), and "A Heart Is a Beating Drum", but didn’t play "Nail In My Coffin".  "No Wow" was the only song from their sophomore release of the same name, and was ill placed as the night’s opener – it was the following "Future" and "Heart" that really kicked the show into gear.  The encore return with Pressures‘ slow, torch-esque "The 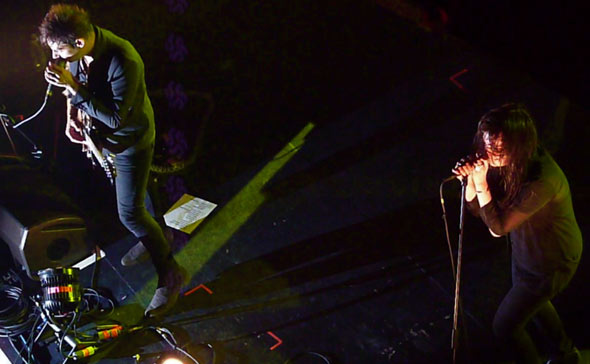 Long Goodbye" was well-placed, but the band didn’t quite save ‘the best for last’ in terms of songs played in the encore return (though, by that point, any piece would’ve worked), and the similar slow cover of Marilyn Monroe’s "One Silver Dollar" earlier was a nice interlude, but didn’t quite fit the evening.  Prior record Midnight Boom‘s "U.R.A. Fever" and "Tape Song" were fiery – but they somehow skipped prior record Midnight Boom‘s "What New York Used To Be"?!?

But perhaps that ode to the old, artistic, crime-ridden Big Apple of the seventies & eighties would have been out of place on a night that was all about believing in yourself & today.  And, after a show like that, The Kills.